Reflections of a Wayward Boy

A nickname shared with Dumisa Ntsebeza

Reflections of a Wayward Boy

A nickname shared with Dumisa Ntsebeza

I have been called many things in my day, some of them clearly unprintable.  But only once was I labelled wayward which, given the context of my life, is probably accurate.  Also, so far as I am concerned, and especially from whence the label came, it was a compliment.  It is one I shared with my friend of nearly 30 years, the advocate, campaigning jurist and, latterly, businessman, Dumisa Buhle Ntsebeza.

adjective: wayward
difficult to control or predict because of wilful or perverse behaviour.

“If you ever write an autobiography, you’ve got a title for it: Journal of a wayward boy,” said Dumisa Ntsebeza when he relayed to me the message given to him by Nelson Mandela.  “The old man says we are both wayward boys,” he laughed.

Mandela made the remark because Dumisa and I had lodged a public protest against a proposal to name streets in Cape Town linking him to FW de Klerk. But it seemed less of a rebuke than an expression one might expect of an exasperated parent who didn’t necessarily disapprove of the action. Almost in the same breath he inveigled Dumisa into becoming involved in a charitable venture.

I suppose I really qualified for the wayward label since I was a former ANC member, who had strayed far from the fold. Although I had met, interviewed and ghost written Nelson Rolihlahla Mandela’s first international feature article (in 1992 for the United Nations Inter Press Service) I subsequently penned criticisms of the scrapping in the following year — by Mandela — of the ANC’s macro-economic policies.

Dumisa, on the other hand, had never been a member of the ANC or the Pan Africanist Congress (PAC) but, as a human rights lawyer, had defended members of both organisations. He, his brother Lugisile, Matthew Goniwe and Godfrey Silinga served four years in prison, two of them in a wing of the death row of Mthatha jail, as members of the small, but grandly named revolutionary socialist group, the Peoples’ United Front for the Liberation of Southern Africa (Puflsa).

In the post-apartheid era I had (with hindsight, incorrectly) opposed the establishment of the Truth and Reconciliation Commission (TRC) as being too much of a sop to the remnants of the apartheid state.  Dumisa, on the other hand, became a TRC commissioner and head of the commission’s investigations unit. He argued, and I subsequently acknowledged that he was right, that the TRC was the best we could have hoped for under the circumstances.

We found that we could agree to disagree and still remain friends because our differences tended to be about tactics rather than strategy.  The friendship had also been forged in tumultuous times, first in the Transkei and especially during the fraught investigations into the North Crest massacre of five school students in October 1993.

Mandela referred to that bloody incident as“thuggery” and noted that De Klerk was a man with “blood on his hands”, facts I reported as widely as I could. However, in the cause of reconciliation Mandela accepted De Klerk as deputy president in a government of national unity, although he never retracted the comments made about De Klerk’s responsibility for the massacre. This was something that continued to irk De Klerk who never apologised for the deed, describing it only as “a mistake”.

But Mandela had come to admire Dumisa because of his dogged pursuit of the truth behind that massacre and, although it was never publicised, it was Mandela who gave fulsome support to Dumisa when senior TRC commissioners demanded he step down from the TRC. They did so following a crude attempt to frame the head of investigations for being involved in the 1993 terror attack on the Heidelberg tavern in Cape Town.

Without any apparent checking, most media publicised a leaked and subsequently discredited “information note” stating that Dumisa Ntsebeza and his car had been involved. The notable exception was Pippa Green, today the Press Ombud. She interviewed Dumisa and discovered that he had not only spent the night of the attack with his wife, but that they were also the guests of a medical doctor friend, Nandi Mbawu.

In the turmoil that followed, with the fragile unity of the TRC threatening to come apart at the racial seams, the step-down demand came. And so did Mandela’s call to Dumisa to hold firm. The incident — a nightmare for the then president of the Black Lawyers Association — seemed to make it imperative to both Dumisa and me that a book should be written about what was going to be so much unfinished business when the TRC came to an end.

So began a three-year labour, supported by our researcher, who is also my partner and wife, Barbara.  It culminated in 2001 with the publication of Unfinished Business, South Africa, Apartheid & Truth which contains, with much else, details of the North Crest massacre. 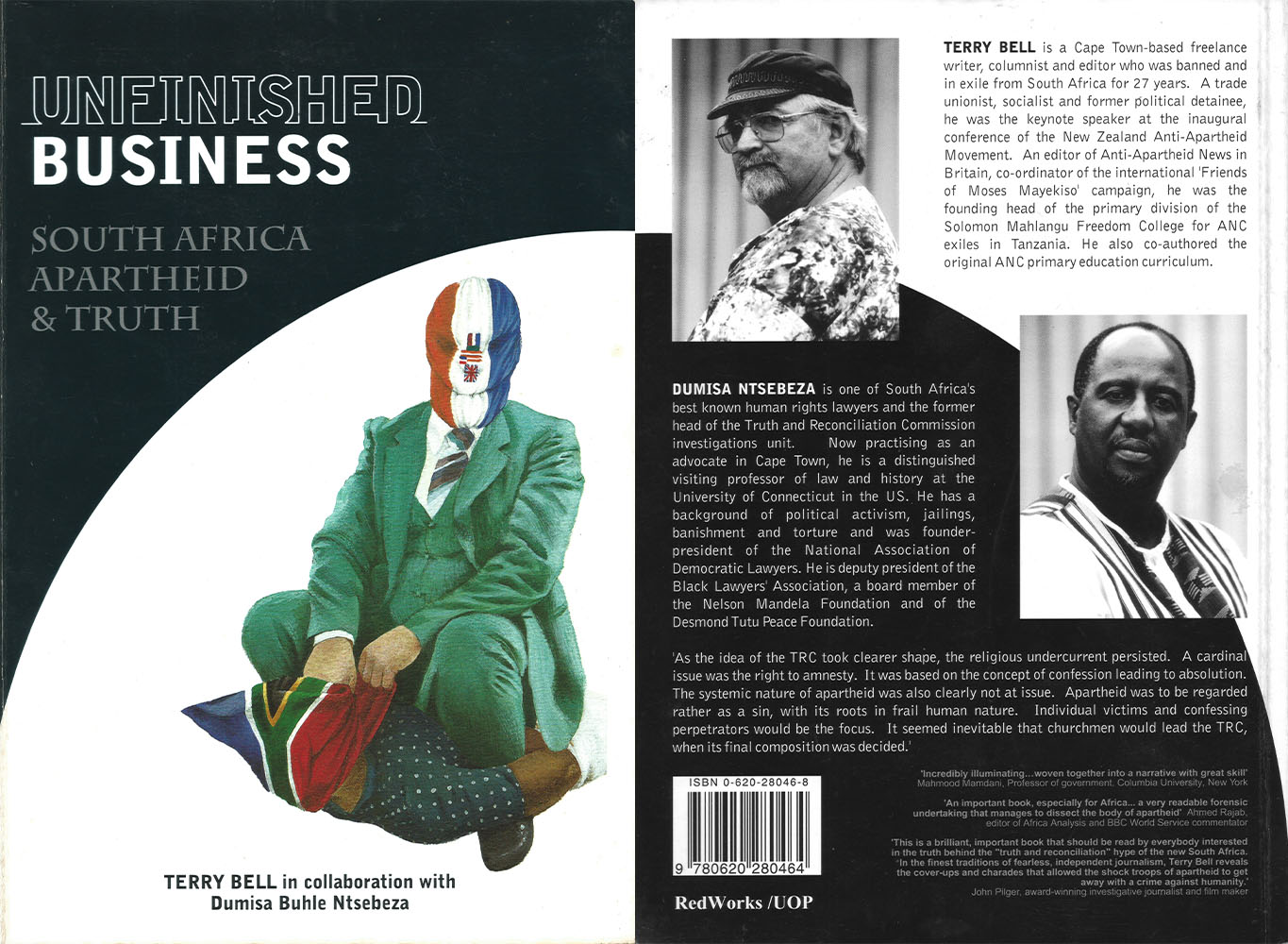 In the same year that notorious political chameleon, Peter Marais, then mayor of Cape Town, proposed that Wale Street, that meets the city’s Adderley Street at right angles just by that icon of local anti-apartheid struggle the Anglican cathedral and the former slave lodge, should be named after the last apartheid president. The symbolism would be complete by renaming Adderley Street that ends at the junction with Wale, Nelson Mandela Avenue.

Dumisa and I were outraged.  At the time the local media, by and large, still accepted De Klerk’s publicly promoted avuncular image and we felt justifiably angry at another attempt to boost De Klerk, this time on the back of Nelson Mandela.  We wrote a joint letter of protest and this was brought to Mandela’s attention by one of his aides who, incidentally, had opposed Mandela’s decision to appoint Dumisa to the Nelson Mandela Foundation board.

The wayward boys rebuke followed.  But more was to come.  A very angry Mandela again telephoned later in the year, a call Dumisa still remembers as “that strange Mandela anger more or less as if it was yesterday”.  Dumisa was driving home at the time when the phone rang and Mandela dispensed with any formalities:  “Unfinished Business, Terry Bell, Dumisa Ntsebeza…” he quoted page numbers and then, “there is to be found there….”  followed by two out of context quotations. He had obviously been presented with them and was furious because, he said, this implied that he was insensitive to the murders of the North Crest students.

Fortunately, we had only recently completed the book and, having read and re-read it many times, Dumisa was able to respond in some detail about what had, in fact, been written. It was obvious that Mandela had not read the book, but only been fed a couple of out of context quotations.  Dumisa remembers responding:  “Whoa, whoa, Tata, I have no access to the book right now, but I can assure you……”

The explanation was quite lengthy and Dumisa ended by pointing out that he and I had been scrupulous in detailing the role of De Klerk and the irony of the peace prize being awarded jointly to a man who had, only earlier in the same year, accepted responsibility for a massacre. Mandela listened in silence and then, after a long pause, changed the subject and, with a chuckle, wished Dumisa well. The wayward boys were obviously still acceptable. At least to Mandela. DM