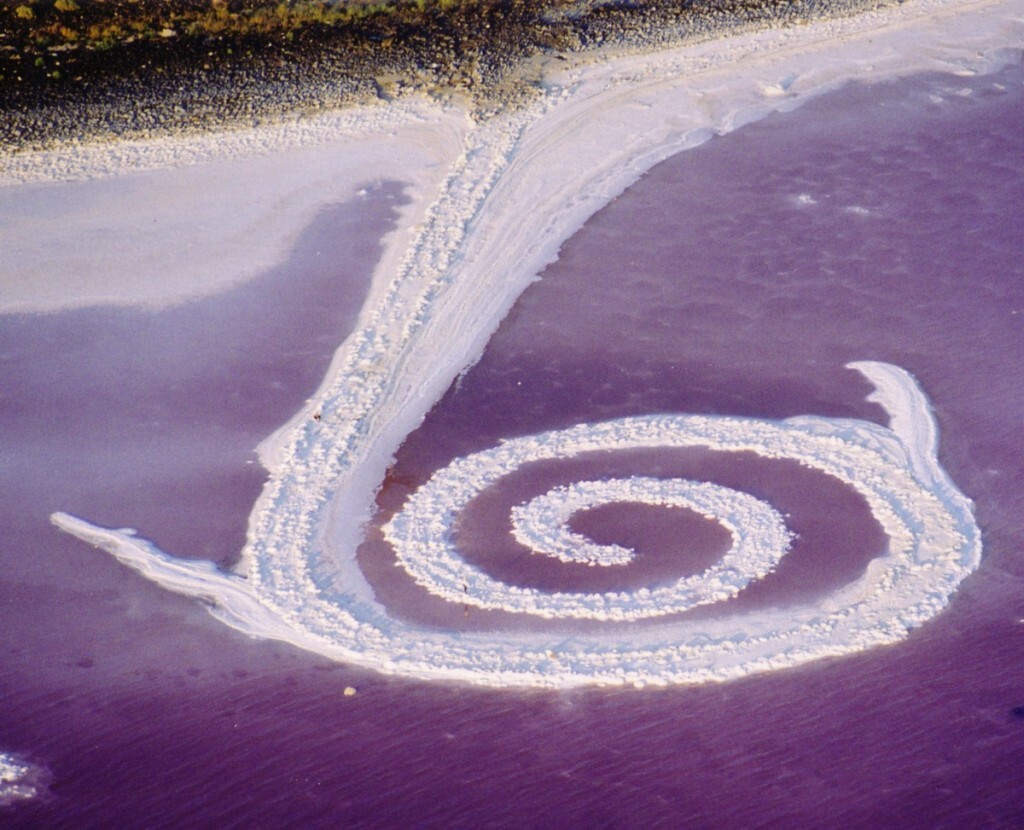 Coiling out into the Great Salt Lake in Utah, Robert Smithson’s ‘Spiral Jetty’ was a groundbreaking work of Land Art in 1970. Made with rocks and earth from the desert and changed by the shifting water, the artwork offers a profound perspective on our existence in the cosmos.

Far out in the deserts of the romanticised American West there is some of the saltiest water in the world. With no outlets to the coast, the Great Salt Lake in Utah is “terminal,” at a fatal endpoint. Only rain can replenish the lake, and rain is not so common in the desert. Instead, in the dry heat, water evaporates from the 4,400km² surface, leaving behind minerals that crystallise into shining white rocks. Animal life can hardly survive with the salinity, except for prehistoric brine shrimp and halophilic bacteria. These microbes turn parts of the shallow water pink, a shock of vibrant colour in the muted desert where the sky is impossibly wide and the empty, arid land stretches for miles.

In the spring of 1970, American artist Robert Smithson saw the lake for the first time. It was a profound moment.

“It reverberated out to the horizons only to suggest an immobile cyclone while flickering light made the entire landscape appear to quake,” he wrote of his first time standing on the eastern shore.

“It was as if the mainland oscillated with waves and pulsations, and the lake remained rock still. The shore of the lake became the edge of the sun, a boiling curve, an explosion rising into fiery prominence.”

Smithson, 32 at the time, was obsessed with the cosmos. He searched for the natural order of all existence, from the atomic to the galactic level. Facing the unbound drama and grandeur of this natural scene, the artist was compelled to create, to make an artwork with and for this specific site.

“From that gyrating space emerged the possibility of the Spiral Jetty.”

In 1970, the idea to make art with and on the land was unprecedented. Art was for indoor spaces, galleries, museums, corporate offices and upscale homes where it could be controlled, differentiated from the outside world, and prized as a commodity. Art couldn’t possibly exist in the soil, or in a lake, especially not in the middle-of-nowhere Utah, far away from the commercial and academic strictures of Manhattan, the heart of US modernism. Smithson’s thinking was out-of-this-world, the Art World, that is. But just a year before, in 1969, men had walked on the moon. Why couldn’t his artwork have cosmic proportions?

With two dumper trucks, a front loader and a tractor, Smithson and a contracted team moved over 6,000 tons of sand, mud and dark basalt rock from the beach to form an anticlockwise coil that extends out into the lake, totalling 460m. The artwork is almost too simple to describe in much more detail. It is candidly itself, a fact exemplified by the title. This is a spiral jetty, just as the Great Salt Lake is a great salt lake.

Sometimes the coil is lapped by the shallow waves or crusted with huge crystals of white salt. For years it was submerged underwater and invisible. Now, in a time of drought, it is dry and sandy. But it is there, 50 years later.

The spiral form is immediately familiar, a shape found throughout nature. Seen in a millipede, a conch, a fern, a hurricane, human DNA, the Milky Way and, appropriately, the molecular lattice of salt crystals. Even though the jetty is not a natural formation, it is part of the landscape, a human intervention more humble than hubristic.

The jetty is a pioneering piece of the Land Art movement of the late 1960s and 1970s in the United States. Alternately known as Earthworks, Earth Art or Environmental Art, the movement is best understood as making work with natural materials or sites. This has antecedents in creations of earlier civilizations like the Nazca Lines in Peru, and structures like Stonehenge or Great Zimbabwe. Though this movement had a more contemporary motivation as an artistic expression of post-WWII environmental politics. Americans were realising that capitalist greed and negligence were threatening the natural world. Modern artists looked to the land – and, in Smithson’s case, the water – to engage these politics directly, making art that was untethered from built space, with its human, mercenary burdens. For artists like Robert Smithson and Nancy Holt (fellow artist and spouse), who were sick of the metropolis and all its baggage, Western states like Utah were a promised land. Sparsely populated and seemingly infinite, the Beehive State was the total opposite of New York City, a place to make BIG ideas happen.

It needs emphasising that there is a remarkable and historical privilege in this perspective. The US is settled land, once occupied by Native Americans and taken over centuries of white colonial violence. Utah is the rightful home of the Ute, Goshute, Paiute, Shoshone and Navajo cultures. While Smithson and other Land Artists had noble intentions to honour the landscape, the creative access they enjoyed is undoubtedly bound up in colonial history. The move to Utah as well as other parts of the US southwest like New Mexico and Marfa, Texas, is a striking echo of the pioneer’s westward expansion across the continent to seize gold, land and “Manifest Destiny” in the 19th century.

Smithson, in awe of the cosmos and theories of natural order, was fascinated by entropy. In thermodynamic physics this is “a quantity representing the unavailability of a system’s thermal energy for conversion into mechanical work, often interpreted as the degree of disorder or randomness in the system.” Make sense? Probably not.

What matters is the last part of the definition, “the degree of disorder.” Entropy represents ever-increasing disorder, a descent into disarray, spiralling out of control. It is why air whooshes out of balloons but not into them; it is why an egg spreads googly in the pan but will never reconstitute inside a smooth shell; it is why with age our skin wrinkles and our teeth fall out — disorder and degradation move in one direction, that’s entropy. Spiral Jetty represents this process boldly, welcoming chaos and change.

Unlike the carefully handled and preserved objects in a museum, Spiral Jetty is at the mercy of the elements. The coil structure creates as much opportunity as possible for interaction between land and lake, and for 50 years Smithson’s artwork has been getting more chaotic, closer to disorder every day. It changes as the climate does, disappearing under the surface, deforming with salt crystals, slowly eroding in the stagnant water. The same goes for the surrounding environment it was created from.

Eventually, at a time too far ahead to think too much about, the jetty will be indistinguishable from the shore, having slowly slid into disarray. Things falling apart are how we can tell time is moving forward. In this regard, Spiral Jetty is a clock for measuring eons.

This longevity feels reassuring. The artwork is about forever but it’s not infinite. Spiral Jetty is a solid monument on earth, and it will disappear into the earth unmonumental. Nothing is so big or stable that it can resist the universe’s chaos, and to pretend to be in control would be a prideful folly. Smithson’s work asks us to confront our place on the planet and beyond, to put ourselves in proportion to the cosmos.

He was insistent about scale, writing, “[s]ize determines an object, but scale determines art. A crack in the wall if viewed in terms of scale, not size, could be called the Grand Canyon. A room could be made to take on the immensity of the solar system.”

The scale and detail of Spiral Jetty are in constant flux, depending on where you are. It can refer to the whole landscape or be as specific as a grain of sand, it’s all up to the visitor and the universe. The artwork can make you feel small, small enough that chaos is inevitable and you have to make peace with it. It can also make you feel cosmic. Cosmic enough that chaos becomes survivable, steady, mysterious, even beautiful. DM/ML

Timothy Walker and Denys Reva for ISS Today • 19 hours ago