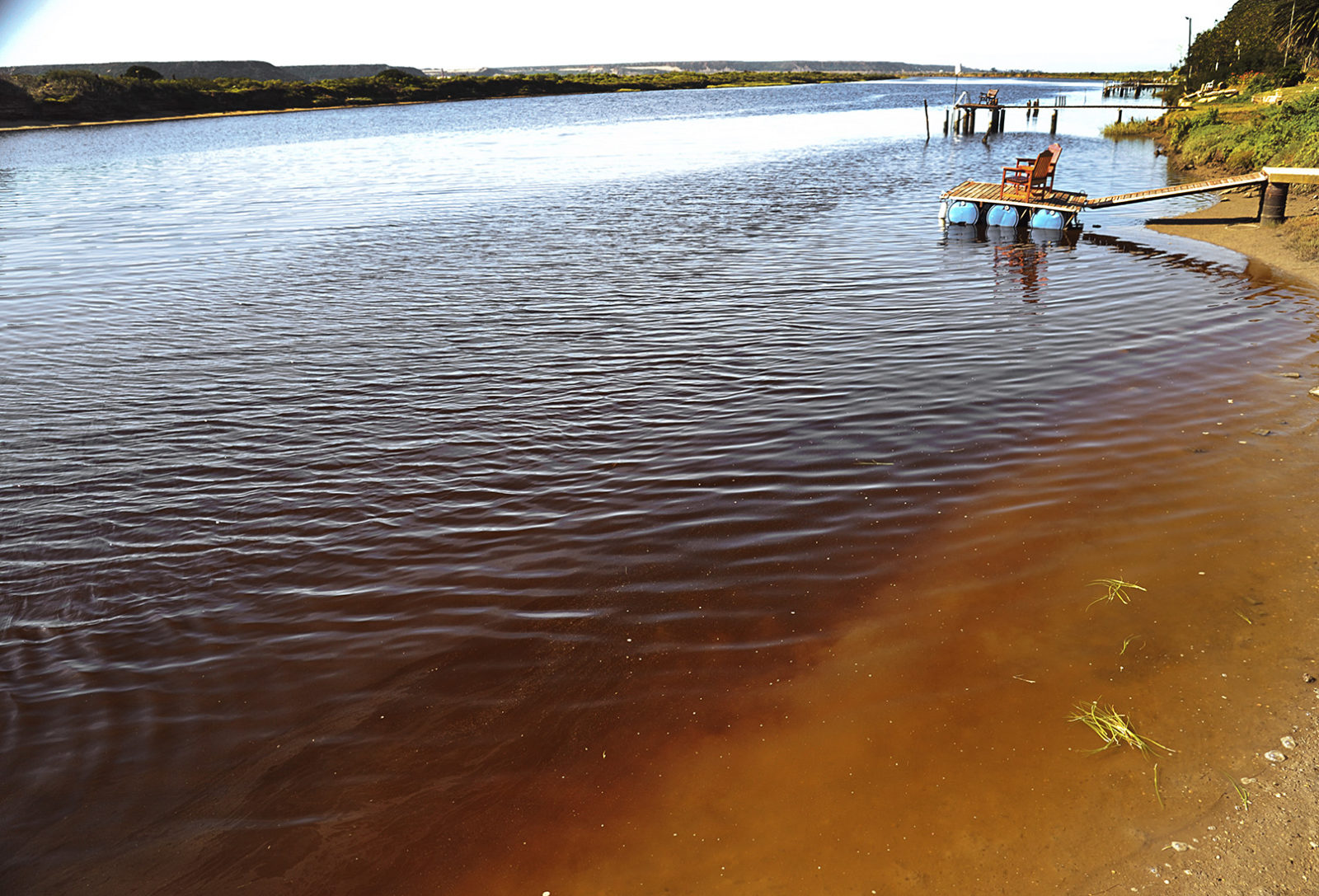 The water in the Swartkops Estuary turned red and then black as a harmful algae, causing the water to be covered in black mucous, spreads in the river.( Photo: Mike Holmes)

The Swartkops River in Nelson Mandela Bay has turned black due to a harmful algae bloom. Now, conservationists fear this could spell disaster for a river and estuary that are already under threat from pollution. Scientists say while nothing can be done to remedy the situation at the moment, the government should lower the amount of treated sewage which municipalities are allowed to discharge into rivers.

A harmful algae turned one of the main rivers in Nelson Mandela Bay red and then black, as conservationists blame high levels of sewage and warn that the public should not eat fish from the river.

“It is a disaster. We initially hoped that the Swartkops River would be spared,” said Daniel Lemley, an expert in the ecology of estuaries. Lemley was part of the team that identified the harmful algae bloom on the river in March this year as Heterosigma akashiwo.

There is an ongoing campaign to have the Swartkops estuary, as part of the Zwartkops Conservancy, declared a protected wetland in terms of the Ramsar Convention. It is home to the mud prawn that provides food to 90% of 200 bird species in the estuary, and is also a source of food to a large number of fish species that feed on the intertidal mud banks.

The estuary has been designated an “important birdlife and biodiversity area” by BirdLife International, and is considered a globally important bird area as 18 endangered species on the South African Red Data list are found in the area. It is also the third-largest salt marsh area in South Africa.

Lemley did his doctorate studying similar harmful algae blooms in the Sundays River estuary on the outskirts of Colchester. “We hoped that the high levels of phosphorus in the Swartkops River would stop it from growing. It seems to have adapted to it. Our river wasn’t the healthiest to start off with. The estuary is very important for fish and for biodiversity and birdlife,” he said.

“I have never seen anything like this before,” said Jenny Rump, former conservation officer of the Zwartkops Conservancy. She has been involved in conservation of the river for decades.

“We are back on the river today to see how far it has spread. It is now right throughout the river. It is really terrible. The worst thing is there are no fish. I have never seen anything like this,” she said.

“It is a type of phytoplankton. They are like tiny plants. They use the nutrients in the water as food. There is a lot more nitrogen and phosphorus in our estuaries,” he said.

“My research showed there was a bloom in the Sundays River in the late 1980s. We first saw a very big bloom of this algae in February and March in the Swartkops River,” he said.

“I think the main reason is that there are three sewage treatment plants along this river. They discharge treated sewage into the river. They are following the guidelines, but the amount of nitrogen allowed, according to guidelines, is still way too high,” he said. “So technically the municipal officials are doing their job most of the time and they are complying, but it is still harmful,” said Lemley

“We must find more innovative ways of reducing the amount of nitrogen in the water. This river has consistently high levels of it every day.”

He said the algae blooms recently noted in the Sundays River are caused by agricultural run-off from fertiliser and not from sewage.

Professor Nadine Strydom from the Department of Zoology at the Nelson Mandela University said eating fish from the two estuaries should be avoided while these blooms were evident.

He added that where this specific algae occurs in high concentrations, like the Swartkops River, it releases a mucilage that remains on the water. “The species itself is not toxic, but it produces a thick mucilage that can clog the gills of fish. It will have a smothering effect and will be dangerous to larval fish and zooplankton.”

Lemley said algae bloom increased the levels of oxygen in the water by up to 300% and this would also have a negative impact on fish. “When the bloom starts dying, the oxygen levels will drop way down,” he said.

Lemley added that there was nothing that could be done to stop the spread of the bloom. “The only strategy is to reduce the amount of nutrients in the river over the long term.”

“There will be an impact on the natural functioning of the estuary. The fish that can swim will leave. A lot of the smaller marine animals that are not mobile, and anything that lives in the sediment, might die. This will last about three weeks and it will come back if conditions are favourable,” he said. He said they were how the bloom might affect people.

“I wouldn’t jump in and swim in the river,” he said.

Professor Nadine Strydom from the Department of Zoology at the Nelson Mandela University said eating fish from the two estuaries should be avoided while these blooms were evident.

“We don’t know enough about their toxicity – as they are toxic – and we don’t want to run experiments with human health to find out,” she added.

Jenny Rump said they realised something was amiss when they noticed the river turning a reddish colour.

“Earlier this year there were particularly heavy flows of sewage into the river. The recent rains may have caused these algal blooms to move down towards the middle reaches. Once blooms start in an estuary, it is difficult to eradicate them without drastic changes to the quality of discharged wastewater,” she said.

By Tuesday, the water had turned black.

“Lessons currently being learned by Professor Strydom and her team in the Sundays estuary, where similar harmful blooms are affecting the ecosystem, show that oxygen can rise to supersaturation during bloom events, where oxygen is so highly concentrated it becomes toxic and affects the young of the round herring, which is an important food species in South African estuaries.

“Then, when the bloom runs out of nutrients, it decays and dies, using up all the oxygen and making the estuary water inhospitable for fish and their prey. This sends the entire ecosystem into a rollercoaster of boom-bust algal blooms and the entire system suffers during the black water decay phases, as is now happening in the Swartkops estuary,” Rump said.

“The Zwartkops Conservancy regards this situation as a total disaster for the estuary and will take whatever action is necessary to get the authorities to remedy it.” DM/MC

Makana judgment appeal: ‘They are using taxpayers’ money to defend the indefensible’

Lydia Hlophe: Helping hundreds of people in the Valley of a Thousand Hills