The forgotten and hungry of our informal settlements 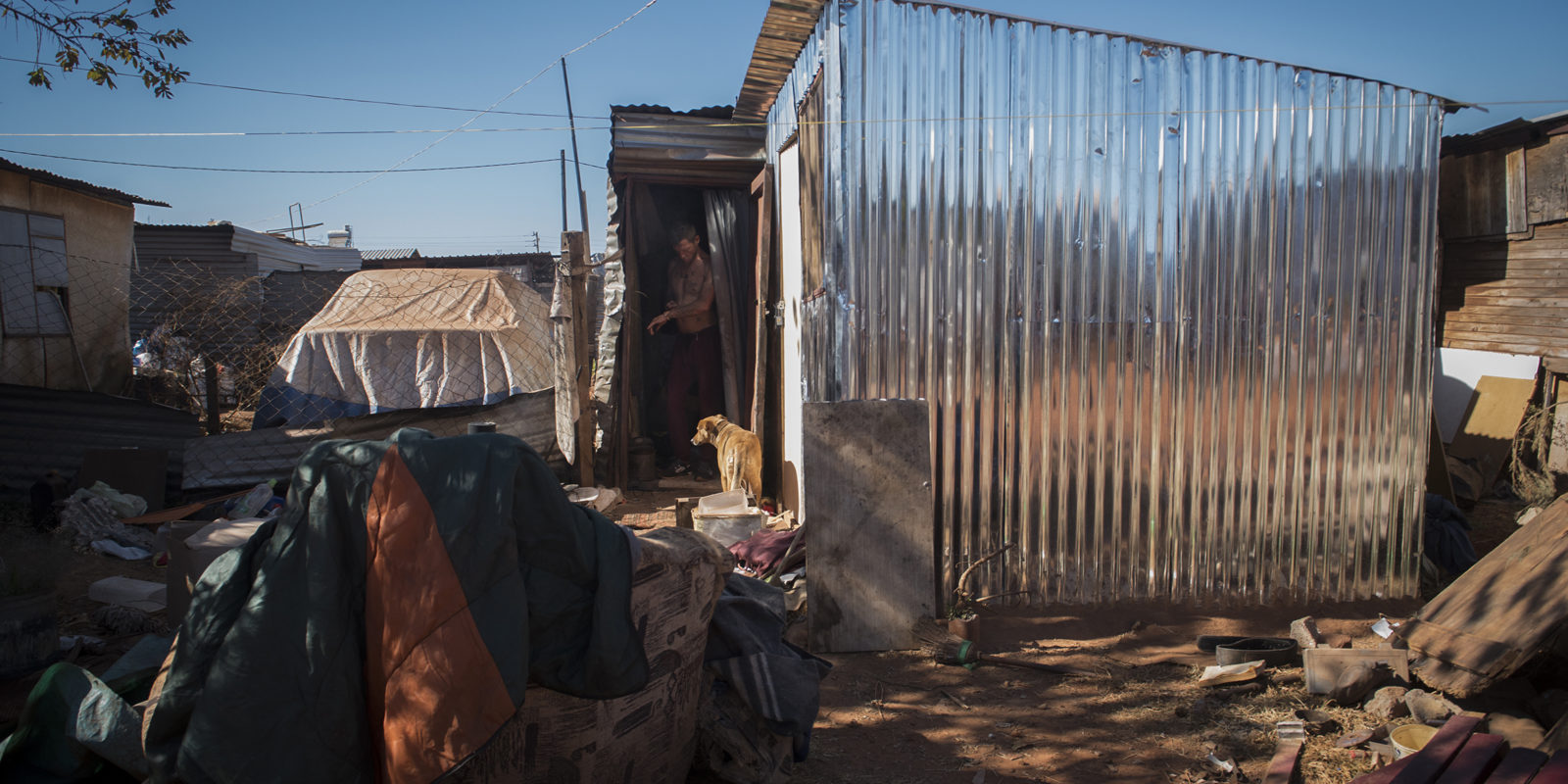 A man is seen in the doorway of his shack in Pango Camp. Many residents are unemployed while others seek employment in the form of car guards, recyclers and even housekeepers. The residents rely on food handouts from private donors. (Photo: Shiraaz Mohamed)

Residents of Pango Camp in Krugersdorp’s informal settlement of Munsieville say their pleas for social relief from the government have fallen on deaf ears, but they are not giving up. They say they are finding ways to keep hunger at bay.

Over 18 months ago, 42-year-old Elize Saunders watched as children rummaged through a dump site near her house in Pango Camp in Munsieville, Krugersdorp, looking for food. She couldn’t ignore it then, and has not been able to do so now, as the impact of Covid-19 is increasingly felt in the informal settlement.

Saunders and her 21-year-old son, Rudolf Mulder, who received his chef diploma from Guvon Academy in 2018, began feeding 50 children some 18  months ago. Today, that number has trebled to 150.

The children come from Pango Camp and neighbouring informal settlements. They get two meals a day – breakfast, which Saunders begins preparing at 03:30, consisting of maize meal, oats, Cornflakes or Weet-Bix – and lunch, of either samp, mielie rice with vegetables, and red meat or chicken if there is any.

“It is our duty, we need to do this. The kids were getting meals at schools but with the lockdown that has changed,” said Saunders, who manages to make the meals with the help of donations from individuals.

It is her dream to have a safe house for the children where she would be able to “feed them buffet style”, but for now she would settle for a steady supply of oats, maize meal, potatoes, carrots, cabbage, mixed veggies, mealie rice, samp, bread, jam, peanut butter, margarine, meat, soya and chicken so that her feeding programme can continue.

The children are not the only ones in need of food.

Several residents say they are struggling to survive, especially during the lockdown, and maintain that their pleas for assistance have gone unheard.

In a recent video made after the lockdown began, they called on President Cyril Ramaphosa to help with medical supplies, blankets, food, masks and sanitisers.

Chairperson of the Pango Residents’ Committee, Hugo Van Niekerk, said, “They (the government) don’t think about us. They only think about themselves. They promised us food parcels but only delivered once. How are we to survive with no help?”

Van Niekerk has been looking for people to sponsor food in order to assist the community.

“Sometimes we get second-hand clothing which we sell. We take that money and use it towards petrol and then go in search of food to distribute to the community. We share the food that we get with residents from the black camps,” said Van Niekerk.

Fifty-year-old Driekie Wiese, who lives with her 11-year-old grandson, suffers from epilepsy, asthma and porphyria, a blood disorder.

She makes ends meet by collecting metal tins for recycling and cleans people’s houses for a meagre R50 a day. “It’s tough but what can I do? I have to. I am actually a qualified nurse but had to quit after a car accident. That is where I picked up the epilepsy,” said Wiese.

“I am scared of the virus. As an asthmatic, I have to be more cautious. For this reason I don’t think I will allow my grandson to go back to school. I am scared that if he goes, I could get infected.”

Commenting on claims that government is neglecting the camp, spokesperson for the Department of Social Development, Thabiso Hlongwane, said, “Social development as a department caters for all South Africans. We do not choose who receives help based on the colour of their skin. We give service to all South Africans.

“In a case whereby a minority group has applied for help and has received references but did not receive aid, they should, with their reference, contact the office of the MEC for intervention.”

Hlongwane said to qualify for aid, one needed to be unemployed, a victim of gender-based violence, homeless, elderly or from a child-headed household. DM

Anyone in need of disaster relief assistance should call the toll free Gauteng number: 0800 228 827 or send an email to [email protected]