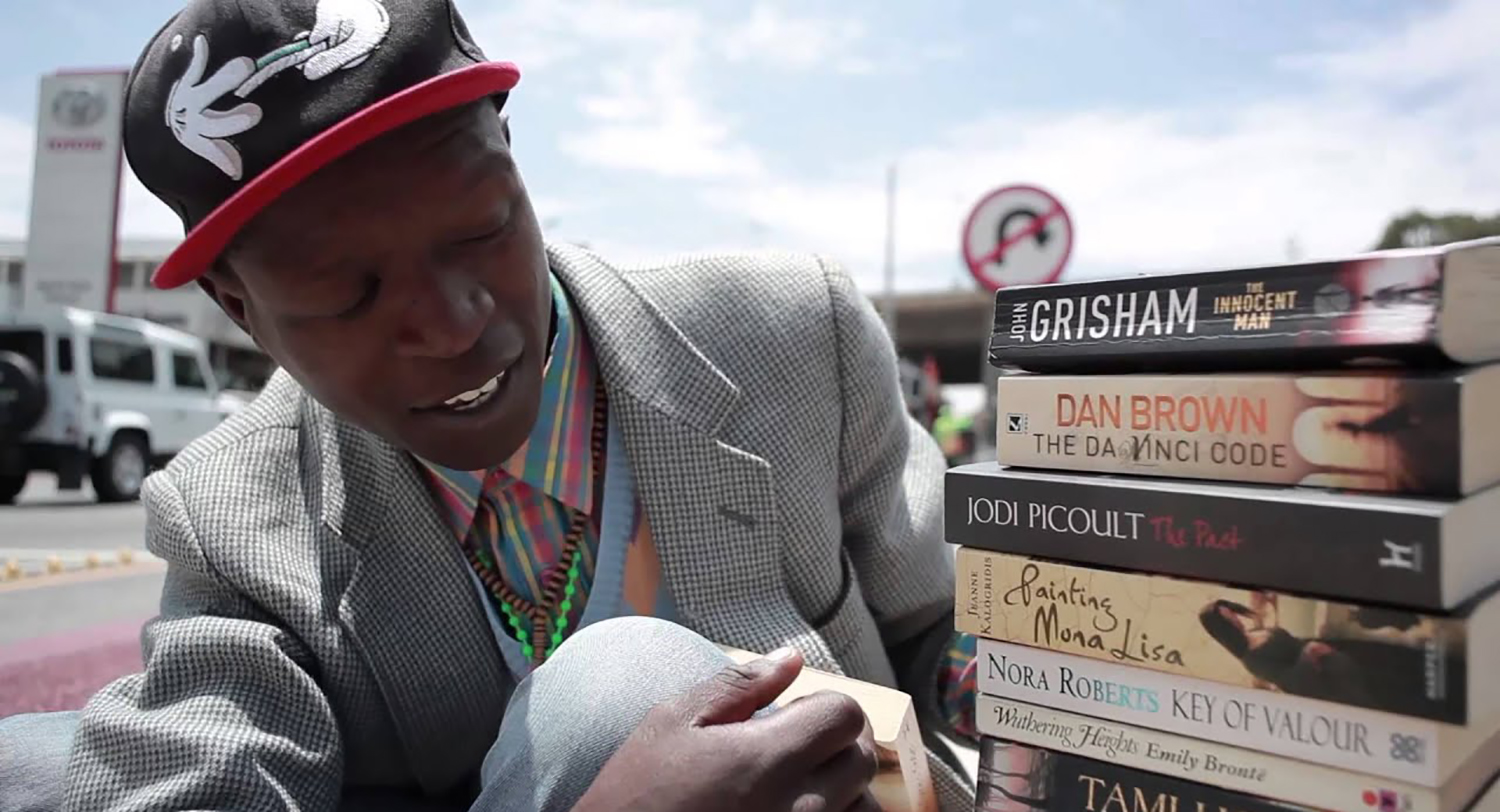 Once homeless and a drug addict, Philani Dladla turned his life around with books. He shares the story of how his insatiable desire for storytelling saved him, and continues to save him.

Throughout life we equip ourselves with different tools to deal with the challenges that we may encounter along the way. For one man, this mode of escapism is and has always been books and words. A love affair that started at the age of 11.

Philani Dladla, who has written his autobiography, The Pavement Bookworm, was given his first book at the age of 11, for his birthday.

The gift, his first-ever birthday present, came from Joseph Castyline – an elderly man whom his mother worked for as a caregiver in his home-town of Port Shepstone, KwaZulu-Natal.

“This [getting a birthday present] was just an exception; that on my 11th birthday that guy gave me a book titled The Last White Parliament by Frederik van Zyl Slabbert. He gave me that book and promised me that if I was able to read it, and tell him what the book was about, he was going to give me more books,” Dladla tells Daily Maverick.

Castyline died a year after that. But, true to his word, he left to Dladla his entire collection of books, in the region of 500. Dladla says the bounty included the work of authors such as Emily Bronte, Charles Dickens, Friedrich Nietzsche, Zakes Mda and Bantu Steve Biko.

From that point on though, instead of things getting better for Dladla – whose single mother had done all in her power to ensure that her boy had the best life possible – they spiralled out of control.

Through this he was able to afford a place to stay. Soon after, he became hooked on drugs. He experimented with crack and tik (crystal meth).

In high school, in order to fit in, he started moving around with the wrong friends. He was expelled from school and at the age of 16 was sent to a Further Education and Training college to take up a vocational course. But this only exacerbated his unruly behaviour.

“I wanted to impress my friends. I started smoking weed, drinking and bunking class. Thinking about it now, it was pure stupidity because when I was in trouble I was alone,” he says.

After he attempted, on a number of occasions, to commit suicide, Dladla’s mother decided a change of scenery might do him good. She sent him to Johannesburg in 2008, to stay with a friend of hers and look for a job.

But even in this new environment, new threats lurked in the wayside, ready to ambush him. And unfortunately, they succeeded.

Dladla got a job working at a restaurant at the Market Theatre. His employers helped pay for his fees for a course in nursing. Soon after, he left the restaurant and started working at the Johannesburg Association for the Aged as a careworker.

Through this he was able to afford a place to stay. Soon after, he became hooked on drugs. He experimented with crack and tik (crystal meth).

“I won’t blame it on that I was young or anything. It was just my curiosity. I wanted to know how it felt like to be high,” says the author.

In 2011, he found himself on the streets after failing to pay the rent, after he had lost his job for arriving high or not pitching up at all. With nothing but a few clothing items and his valuable book collection, he found shelter under the Nelson Mandela Bridge in Braamfontein.

He sought refuge at the bridge because he had seen many homeless people living there. He was welcomed but told to pay “rent” if he wanted to stay. This he did by giving up some of his clothes to the residents. But he kept his book collection.

While he was settling in, he observed that everyone on that street had their own modus operandi for making money to support their drug habit, and decided that his one would be books.

At first, he started doing book reviews on Empire Road, at the traffic light opposite the entrance of Wits University and getting paid for his charismatic character. He did not sell the books because of sentimental value – merely spoke about them. But eventually, he was open to leasing them out.

As he became a familiar face in the area, people, especially students at Wits, started giving him books, including their old textbooks, to sell.

With his hustle now even more profitable, he feared that having money would push him to relapse, and so he started a “soup kitchen”. He bought instant soup packs and bread to give to the homeless people he lived with under the bridge.

“I started the soup kitchen for selfish reasons, not because I wanted to do good. I did it because I didn’t want to have any money. If I didn’t have money lying around at least I wouldn’t think about drugs, because addiction is hard. Especially if you crave drugs and you have money in your pocket,” Dladla states.

He gained public attention in 2013, when filmmaker Tebogo Malope interviewed him about his roadside bookstall and posted the video online where it went viral. That is also how the Pavement Bookworm moniker was born.

It was at this time that Dladla contemplated writing a book on mental illness, to try to interrogate some of the intrinsic othering of those living with the silent killer, especially – but not exclusively – in black communities.

Since then, Dladla has given a TEDxTalk in Johannesburg, in 2014, published an autobiography in 2015, opened a book club for children and is also a motivational speaker.

However, this success has come with demons. As the saying goes: new levels, new devils.

“On the street I always had drive and the motive to wake up and go do something, wake up and go stand by the streets and sell books. And suddenly I had speaking engagements that would pay me like R30,000 once-off,” muses Dladla.

“It made my life not as exciting as it used to be, having that sense of mission. You know, when you have to work just once a month to get paid as opposed to working every day, you lose that sense of motivation. So, I was so depressed that I ended up being admitted to Tara, a mental institution in Sandhurst.”

It was at this time that Dladla contemplated writing a book on mental illness, to try to interrogate some of the intrinsic othering of those living with the silent killer, especially – but not exclusively – in black communities.

“This book I’m working on is aimed at breaking the stigma that is attached to mental illness out there. It is a big thing. In fact, not only for black people, but white people too. Let’s just say they understand it better, but the stigma is still there,” the 31-year-old states.

Dladla says initially it was his intention to write the book from a personal point of view. However, he met many people going through similar struggles at Tara.

He says he met people whose families don’t want them around, people who lived good lives and suddenly they just lost everything and woke up in a nightmare. And even people who’ve tried to commit suicide.

“The reason why I decided to write this book is because I have struggled a lot with my mental health like depression and stuff. I went in and out of hospital and you must remember that I’ve got a history of drug use. I’ve also been diagnosed with that bipolar mood disorder,” he says

One of the people who has been with him during his new-found struggles is Edith Phaswana, acting head at the Thabo Mbeki African Leadership Institute, Unisa, and current president of the South African Development Studies Association. She and Dladla met through a mutual friend a few years ago, and formed a very good relationship.

“My relationship with Philani became that of mother and son. He became a big part of my family. He stayed at my house and when he was admitted to hospital, I would be called to speak to his doctors as his mother is far away in KZN. Philani can come knock at my house at 2am. I have become a point of contact when he is in crisis,” Phaswana tells us.

Dladla is looking to publish his book independently. The release date is not set as yet, but the writer says he is eyeing this year to release, although he admits that Covid-19 might put a dampener on those plans. DM