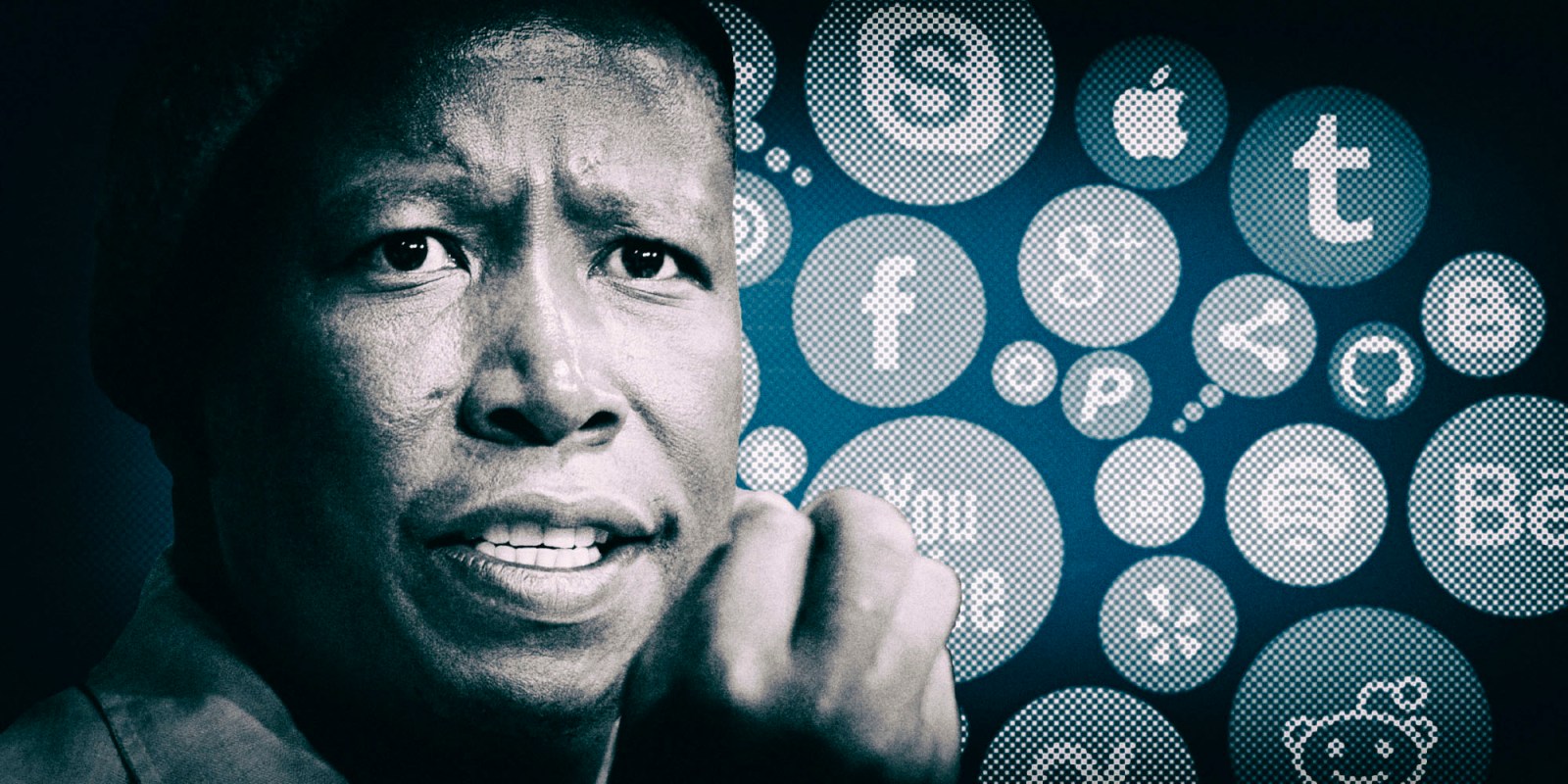 This is a summary of trending, highest-impact and most active themes and narratives related to social cohesion and division in South African public-domain social media conversations on 28 May 2020.

Quotes and video clips from EFF leader Julius Malema’s press conference have trended over the past 24 hours. The top topic in the online conversation was “Malema #EFFPresser”.

Malema called for hard lockdown measures, like compulsory quarantine. The EFF Official account tweeted clips from the conference. One tweet reminded South Africans that the EFF had called for compulsory quarantine at the start of the coronavirus pandemic. The EFF proposed Robben Island for a quarantine site, but said it would not happen because “Government is scared of white people”. Malema explained that the EFF was against the sale of alcohol, as it would increase the load on hospitals and there would be no space for Covid-19 patients. 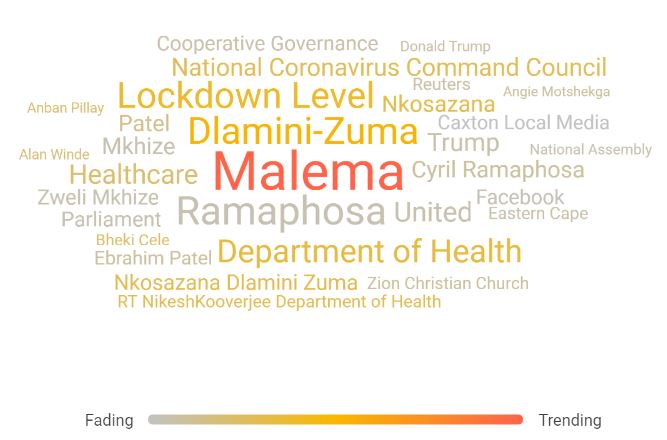 @Siseko_Soga tweeted, quoting Malema saying, “Alcohol is: – destructive – destroys families – contributes to unprotected sex and spread of diseases – contributes to domestic violence.” This tweet, posted at 13:31 on Thursday, had been liked 4,600 times and retweeted 2,000 times by 09:00 on Friday.

The EFF was against the reopening of the mines. At 13:30 @MbuyiseniNdlozi tweeted: “#StayAway: if Covid-19 is going to kill us anyway, then we must die in our homes; not at work digging gold that does not belong to us. Not at work, cleaning kitchens & gardens of the boers. If this is the end, then it must not find us on our knees & chains, but with our boots on”. He tweeted using #StayAway and #StayatHome.

The tweets received significant positive and negative reactions: some praised Malema’s statements, while others said his ideas contributed to economic collapse in South Africa. At 09:00 on Friday these tweets had received a total of 760 retweets and 2,300 likes.

Malema spoke about the economic impact of the coronavirus on South Africans. He called for a 12-month moratorium on the repossession of cars and houses by private banks, citing job losses that had started and would continue as the coronavirus pandemic deepened. Malema further criticised banks for continuing to place financial demands on small businesses during the coronavirus crisis. These tweets trended less than those about alcohol or staying at home, with a combined total of 140 likes and 83 retweets by Friday morning.

Lockdown Level 3 regulations was a big topic on social media and news cycles on Thursday, trending as the second biggest topic.

At 07:14 the Government Communication and Information System’s official Twitter account tweeted: “The Minister of Cooperative Governance and Traditional Affairs @DlaminiZuma & the Minister of @the_dti Ebrahim Patel will brief the media on the regulations relating to the COVID-19 Level 3 restrictions”. This post reached about 133,000 people on Thursday and Level 3 conversations dominated social media for the rest of the day. 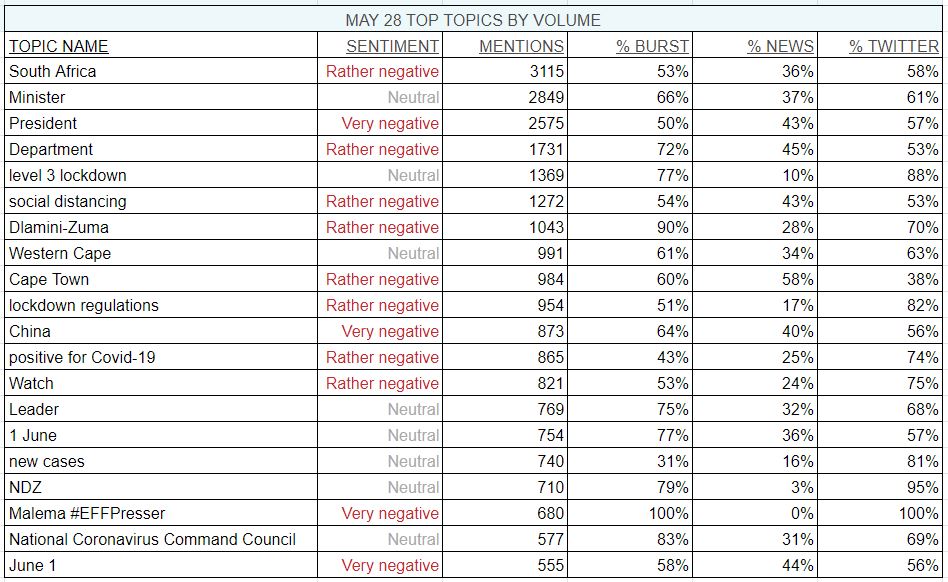 Alcohol sales became a hot topic. The announcement that “Alcohol will be on sale on Level 3 from Mon to Thurs, 9am to 5pm” came in as the number five post by reach for the day.

The Presidency’s official Twitter post also garnered significant attention with over 700 likes, retweets and comments by Friday morning. The post asked South Africans to “work together to protect lives & continue to observe vital social distancing & hygiene practices to curb the spread of COVID-19”.

A post by the DA, which received almost 550 likes, retweets and comments on Thursday, accused the government of losing the plot in the fight against Covid-19: “Instead, their focus has shifted to undermining the hard-fought freedoms of all South Africans.”

A post by SAfm news said the Human Rights Commission had written to Basic Education Minister Angie Motshekga urging her to postpone the reopening of schools — as learners get ready to return to schools on Monday amid widespread criticism.

Former DA leader Mmusi Maimane asked why the media’s focus had been on cigarettes and not schools in a tweet that got almost 4,000 likes, retweets and comments.

Many religious leaders have decided to keep the doors to their places of worship closed. The Muslim Judicial Council advised mosques in Western Cape to remain closed for another month. The Claremont Main Road mosque announced it would stay closed in a post widely shared, with over 1,500 likes, retweets and comments. This post was also retweeted by Maimane.

Western Cape Premier Alan Winde said the national backlog for Covid-19 testing was 100,000 tests. Winde said the WC provincial testing strategy had changed: instead of testing as many potential contacts of confirmed cases as possible, tests were now reserved for patients in hospitals.

Later in the day, @News24 tweeted confirmation that Department of Health acting DG Dr Anban Pillay said the National Health Laboratory Services had a backlog of 80,000 tests for Covid-19.

While online jokes about a famous Cape Town club being a place of worship for some made the rounds, some accounts used humour to start conversations with more serious, and more sinister, undertones. 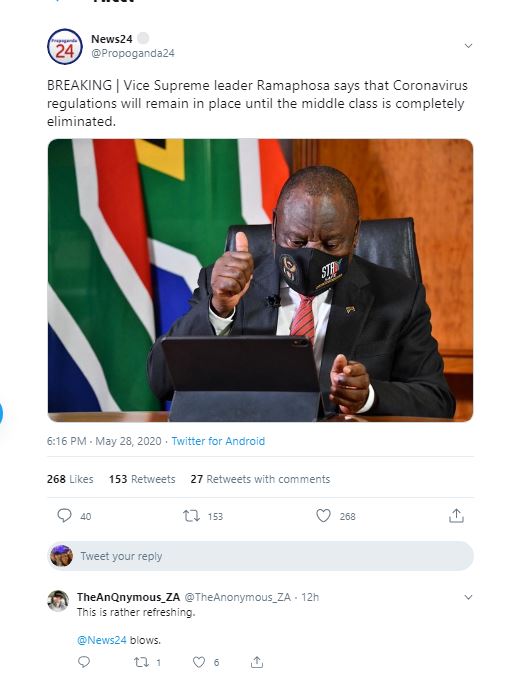 After the National Coronavirus Command Council released Level 3 regulations, some Twitter users poked fun at rules they deemed to be arbitrary. At 18:16 an account called @Propaganda24 tweeted for the first time since 2018: “Ramaphosa says that Coronavirus regulations will remain in place until the middle class is completely eliminated.” By Friday morning, the post had been liked 268 times and retweeted 153 times. In another attempt to spread social discord, the fake news page went on to tweet at 20:36 that, “Dlamini Zuma says the communist takeover of South Africa is well on track. The Whites don’t even realise, they are all watching DSTV.” This post was retweeted 74 times by Friday morning and not all readers seemed to be aware that the quote was fake. Some commented that the current ANC and EFF are “black Nazi’s” or “Zimbabwe 2.0”. At 21:00, the account tweeted more false information, saying government had unexpectedly lifted the ban on the sale of cigarettes. The sale of tobacco products remains banned under Level 3.

Trending by volume and burst were two tweets by @NikeshKooverjee. The first, at 17:16, was retweeted over 600 times and received more than 1,500 likes. The tweeter said the Department of Health had confirmed that haircuts would be allowed only for those who were in a relationship, because single people did not have anybody to impress. 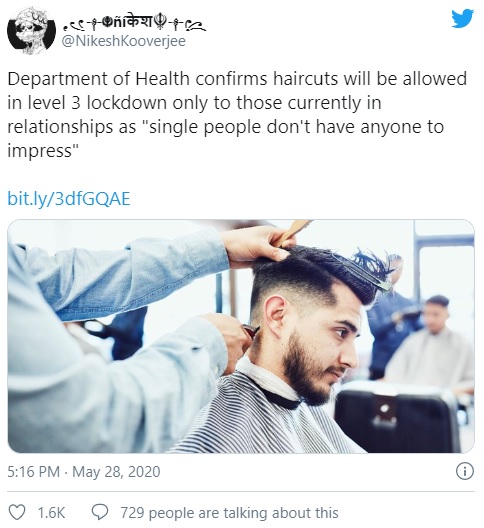 At 17:31, he followed up with The Chilli Bar being granted permission to operate at Level 3 because it was considered a place of worship. Responses included: “bro, you almost had me” and “This man is playing with people’s feelings”.  DM