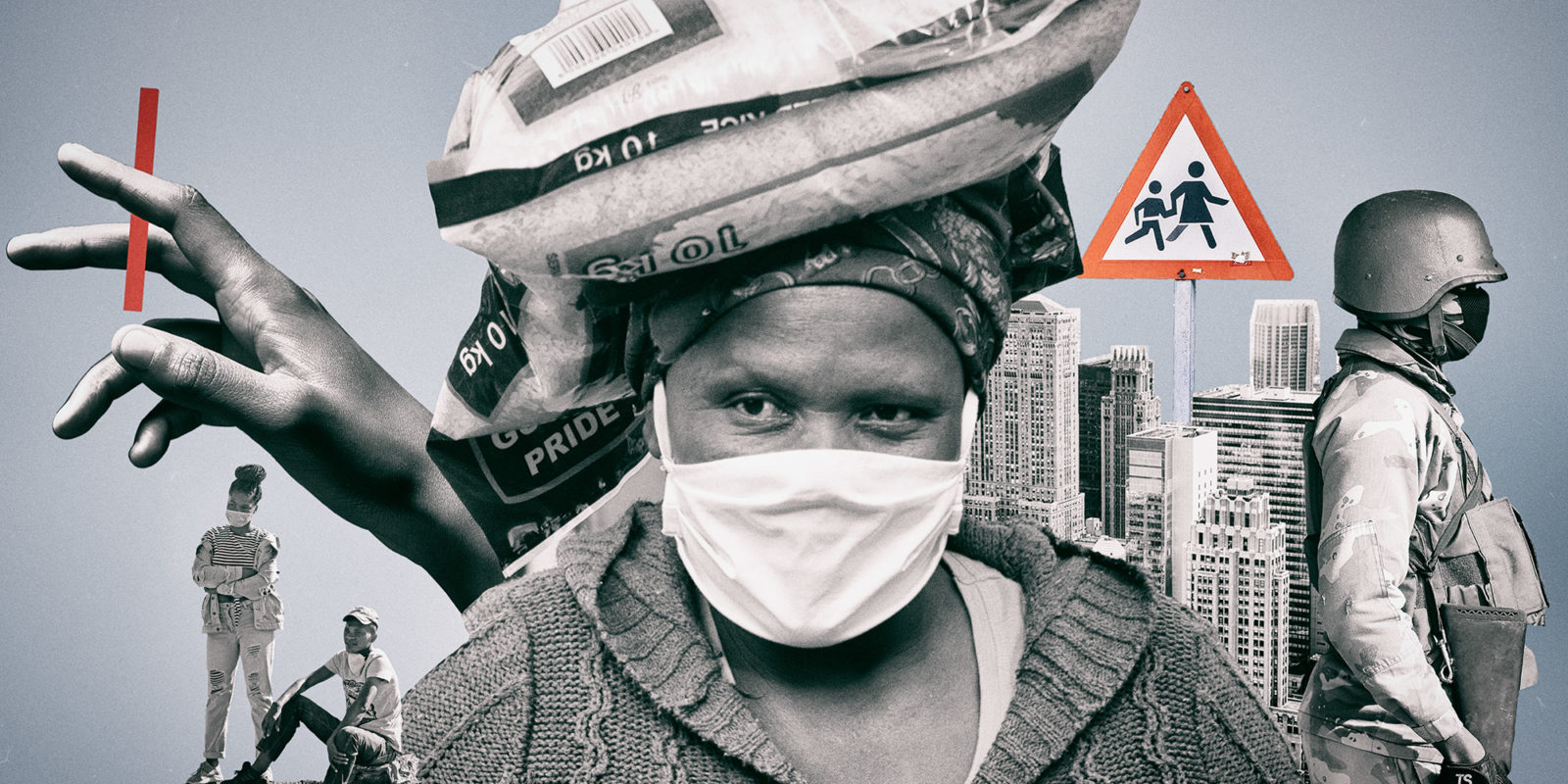 Trust makes things easier for the state, makes collaboration possible, and ensures a unity of effort. The less, however, that people think the state cares about them, the less likely they are to abide by its rules.

In January 2020, the Edelman Trust Barometer was released. A survey of how much trust the citizens of 28 countries have in government, business, media and NGOs, it includes a score for South Africa.

The survey showed that South Africans have the lowest trust in the government of all the nations surveyed, with a score of just 20%. This was despite the fact that a majority (57%) of South Africans felt that they and their families would be better off in five years.

The survey also found that 59% of South Africans trusted NGOs and 58% trusted business while only 40% trusted the media.

But the figure of just one in five trusting government ought to have rung the alarm bells and led to some introspection about what exactly was going wrong.

Government operates on the trust of its citizens. Their support for political institutions, including government and Parliament, is conditional on performance of those institutions, perceptions of fairness, practices of corruption, and the delivery of development.

Perhaps the 25 years of failing to deliver more jobs than there were job seekers entering the market has led to the cynicism among citizens. Perhaps it was the “10 lost years” under former president Jacob Zuma when it became clear that government had been converted into a massive patronage and graft machine to enrich his family, friends and anyone in the ruling party who wanted to join in.

An earlier Afrobarometer survey in August-September 2015 – in the middle of the Zuma years – showed a near halving in trust in the president since 2011. But the mistrust went beyond Zuma. Trust in Parliament, provincial premiers, local government councils, the ruling party, and opposition parties also declined dramatically, making political leaders the least-trusted public officials in the country.

Whatever the original causes of the malaise, it was sobering that the presidency of Cyril Ramaphosa, now in its second year, had failed to shift the gauge despite promises of prosecutions and a return to accountability. Trust in government had, in fact, dropped by one point from the previous year.

Then came the Covid-19 pandemic and, fearing the worst as information about the disease, its deadliness and how it was transmitted was still in its infancy, all eyes turned to Ramaphosa and the government.

It was a golden opportunity for the government to rebuild public trust by demonstrating that it was agile, organised and placed the well-being of the people above party and the politicking which had continued to be noisy within the ANC.

On the evening of 15 March 2020, Ramaphosa led from the front. His address declaring a State of Disaster overnight transformed the image of his government from that of an indecisive malingerer hobbled by factionalism to that of a decisive, compassionate and strong entity that would be led by the facts and not the factions.

The tone was Churchillian. “I am addressing you this evening on a matter of great national importance. The world is facing a medical emergency far graver than what we have experienced in over a century,” Ramaphosa told a nation gathered about its television sets.

“Given the scale and the speed at which the virus is spreading, it is now clear that no country is immune from the disease or will be spared its severe impact. Never before in the history of our democracy has our country been confronted with such a severe situation.”

Schools would soon close, visas for those travelling from the worst-affected countries were revoked, large gatherings were banned and more than half the country’s ports of entry were closed.

A “National Command Council” would meet three times a week to manage the government’s response to the crisis.

… This was amplified when the “collective” began to itemise what could or could not be sold by retailers and when the president of the SA Medical Research Council, Professor Glenda Gray, said there was no scientific basis for the decisions being made.

By the morning the country was experiencing a new bout of “Ramaphoria” and South Africans were scurrying about, buying masks and sanitiser where they could. The savviest of those with vices were stocking up on cigarettes and booze.

There is no measure of this – at least none that is available yet – but it is very likely that trust in government rose steeply following the address as Ramaphosa was universally praised – even by the media hacks who had once blamed him for the Marikana massacre.

What people wanted was clear, decisive leadership and, for the moment, they had it in the person of the president.

What happened to undermine that trust in the weeks that followed ought to be the subject of an academic study into great public relations disasters of the political world.

Trust makes things easier for the state, makes collaboration possible, and ensures a unity of effort. The less, however, that people think the state cares about them, the less likely they are likely to abide by its rules.

Ramaphosa had built up trust because he had signalled he was rising above the petty, factional and irrational politics that had mired the country in economic mediocrity, joblessness and poor service delivery.

The president had broken decisively with that politics by leading from the front.

When it was revealed that this impression was mistaken and that he would follow the will of the collective – even when it contradicted his word given in a nationally televised address, as was the case with his announcement that tobacco sales were to resume – trust collapsed.

This was amplified when the “collective” began to itemise what could or could not be sold by retailers and when the president of the SA Medical Research Council, Professor Glenda Gray, said there was no scientific basis for the decisions being made.

We were, it turned out, still in the old reality of irrational decision-making. When decisions appear irrational, it is natural to wonder at the motives and so an old photograph of Nkosazana Dlamini Zuma with a tobacco tycoon said to have funded her ANC presidential bid – something which she denied – resurfaced.

The absence of trust – and the correlation with corruption – explains why we seek reasoning behind government actions other than the common good. Sixty-five percent of respondents in the 2018 Afrobarometer survey believed corruption had increased in the previous year.

Trust makes things easier for the state, makes collaboration possible, and ensures a unity of effort. The less, however, that people think the state cares about them, the less likely they are likely to abide by its rules.

The 2018 survey found that more than half of South Africans felt public officials did not treat them with respect. Two-thirds of respondents said they trusted the police “just a little” or “not at all”. Some 65% felt the same about Parliament and local government councils, and 60% mistrusted the ruling ANC.

When the police and soldiers began their heavy-handed marshalling of the lockdown, this distrust was reignited.

There is no quick fix to rebuilding trust, but as Ramaphosa has demonstrated, leadership that promises a decisive shift to rational action is a good start. There is goodwill that can be tapped with the right leadership. It needs to start with openness to criticism and a willingness to take questions when making public statements.

Democracy helps, given that trust is not only about performance legitimacy, but inherently political in nature. Trust in electoral institutions is thus a key element. This may explain the support of just 30% of respondents for opposition political parties in the 2018 Afrobarometer survey.

Where does this end?

In their 1975 report “The Crisis of Democracy” to the Trilateral Commission, set up to promote relations between the US, Western Europe and Japan, Michel Crozier, Samuel Huntington, and Joji Watanuki conclude on “the increasing delegitimation of authority” that “What is in short supply in democratic societies today is thus not consensus on the rules of the game but a sense of purpose as to what one should achieve by playing the game.”

When trust is broken, those in power drift towards populism in a bid to offer some sort of short-term hope to their constituency. This usually does not end well as the state doles out patronage and tolerates a slide into greater indebtedness without the political will to confront its profligate spending. The disorder at Eskom and now with the national balance sheet derives from years of jobs for pals without improving productivity and tenders going to the least efficient operators.

The “little racist” tweeted response of the mayor of Ekurhuleni, Mzwandile Masina, to the Kiffness’s Nkosazana Dlamini Trafficker satire is a marker on the slippery slope to demagoguery. So too is the threat by a government official to silence Dr Gray because she dared to speak her mind in public, or the casualness, now, of the confusion between state and party.

While name-calling populism is easy and has a ready – if sometimes exaggerated – following on social media, building trust between government and the people is a harder road.

There is no quick fix to rebuilding trust, but as Ramaphosa has demonstrated, leadership that promises a decisive shift to rational action is a good start. There is goodwill that can be tapped with the right leadership. It needs to start with openness to criticism and a willingness to take questions when making public statements. More than that, he needs to demonstrate a break with the experience of the recent past when mixed, contradictory messages are defended with populist cannon-fire.

Realistic promises that are delivered on by a government that is demonstrably free of graft would also help. Ramaphosa began moving in the right direction – it’s a pity he didn’t hold the course. DM

Mills is the director of The Brenthurst Foundation. Hartley is its research director.