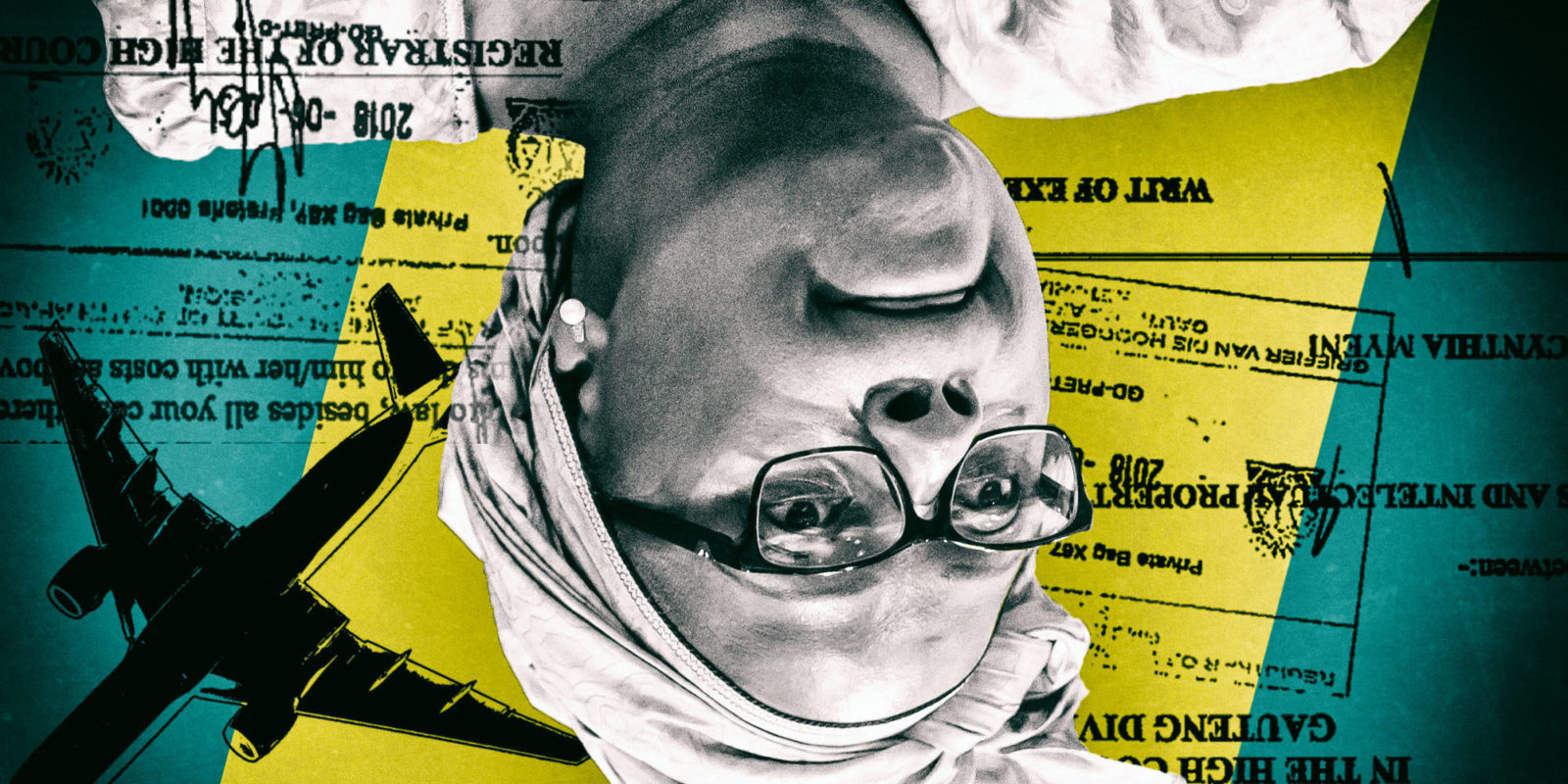 Parsing a word cloud from the judgment handed down in the North Gauteng High Court declaring Dudu Myeni a delinquent director for life, paints a devastating portrait of the former SAA board chair and friend of Jacob Zuma’s character and mien.

“Reckless”, “supine with indifference”, “grossly negligent”, “gone rogue”, “playing the victim”, “dishonest”, “reprehensible” and an “unreliable witness” would float most prominently in Myeni’s cloud of Damocles.

In a page taken from the faux Radical Economic Transformation playbook, Myeni sought to slip the coils of justice in this instance by not only delaying court proceedings on several occasions, but ultimately blaming the “collective” for the destruction of SAA on her watch.

Handing down judgment on Wednesday 27 May, Judge Ronel Tolmay, in a matter brought by the Organisation Undoing Tax Abuse (Outa) and the South African Airways Pilots Association (SAAPA), declared Myeni a delinquent director for “the remainder of Ms Myeni’s lifetime”.

The judgment is a victory for South African civil society and Outa which originally served papers on Myeni in March 2017. Outa and SAAPA had sought an order declaring Myeni a delinquent director in terms of section 162 (5) of the Companies Act 71 of 2008.

Myeni was also a member of the accounting authority of SAA, had acted as non-executive director of Air Chefs, an SAA subsidiary from September 2009 to 8 March 2013 and again from 28 May 2015 to 30 September 2016.

Tolmay referred her judgment and evidence led at the trial to the NPA “for their determination of whether an investigation regarding possible criminal conduct should follow”.

“Ms Myeni is not a fit and proper person to be appointed as a director of any company, let alone a board member of an SOE,” remarked Tolmay.

Tolmay said it was appropriate for the court to take “judicial notice of the immense harm that was done to the country and its people in the last years due to the mismanagement, not only of SAA, but also other SOEs and the suffering that it brought and continues to bring to millions of South Africans”.

Even worse, said Tolmay, Myeni was a “director gone rogue, she did not have the slightest consideration for her fiduciary duty to SAA. She was not a credible witness, as already stated, she changed her version, contradicted herself, blamed others and played the victim. Her actions did not constitute mere negligence, but were reckless and wilful.”

This dishonesty related not only to her attempts to explain her failure to appear [Myeni had pleaded poverty] but also her failure to disclose “that she earned over R4.3-million in directors’ remuneration during her time at SAA and an additional R3.45-million from her time as a director on the Mhlathuze Water Board”.

It was a matter of public knowledge that SAA had received billions in government guarantees, leaving government liable should SAA default on any of its liabilities.

“Not only the courts, but also government should hold board members of SOEs accountable when they fail to execute their duties,” said Tolmay.

Myeni, who is also the executive chairperson of the Jacob G Zuma Foundation, not only proved dishonest in her dealings with SAA but “she has also been dishonest with this court”.

This dishonesty related not only to her attempts to explain her failure to appear [Myeni had pleaded poverty] but also her failure to disclose “that she earned over R4.3-million in directors’ remuneration during her time at SAA and an additional R3.45-million from her time as a director on the Mhlathuze Water Board”.

Not to mention, said Tolmay, Myeni’s undisclosed earnings from her numerous other directorships over the years.

“She also failed to disclose that she remains an active director of at least four companies, including her ongoing role as deputy chairperson of Centlec, a Free State parastatal, which paid her at least R274,364 in directors’ fees in 2018.”

Myeni had also tried to conceal from the court that she owned property in Richards Bay worth at least R4.2-million.

“When confronted with this evidence in cross-examination, Ms Myeni made no attempt to deny it.”

Myeni contradicted her first excuse that she did not have the money to attend court by stating that she felt SAA should have paid her costs and this demonstrated that she “perjured herself on affidavit”.

“Such dishonesty and disrespect of this court’s process is worthy of a punitive costs order,” said Tolmay.

There existed a “reasonable possibility that something sinister was going on behind the scenes,” said Tolmay and this constituted sufficient grounds for the NPA to investigate the circumstances of the Emirates deal as well as the Airbus swap transaction.

This investigation, Tolmay added,  should include other board members who were implicated.

Myeni, who originally qualified as a primary and secondary school teacher, considered herself “a corporate governance expert” said Tolmay.

A 2009 SAA annual report included a Bachelor’s degree in administration from the University of Zululand, but a year later this was expunged as Myeni admitted that she was “still in class”.

In fact, the then-minister of finance, Nhlanhla Nene, had warned Myeni that the SAA board was not executing its fiduciary duty “but his writing made no impression on her”.

Myeni had sought, said Tolmay, to avoid individual liability for the disaster at SAA by blaming “the collective”.

However, said Tolmay, “collective responsibility” did not exclude individualised responsibility and liability for each of the board members.

“Board members are both collectively and individually responsible. Collective responsibility means that all directors have a duty to ensure the proper management of the company but this does not absolve directors of individual liability.”

The SAA board was also subject to “more stringent financial reporting duties than ordinary companies” and the legal duties of all directors “are the same”.

It was unclear to the court who exactly this “collective” was, but from evidence, “it could only have been Ms Myeni, Dr [John] Tambi and Ms [Yakhe] Kwinana… as evidence was clear that the other board members pressed for the conclusion of the swap transaction,” said Tolmay.

In fact, the then-minister of finance, Nhlanhla Nene, had warned Myeni that the SAA board was not executing its fiduciary duty “but his writing made no impression on her”.

While Myeni had played a leading role in attempting to renegotiate the Airbus swap transaction and had had direct dealings with Airbus throughout, she had maintained that she had been “caught in the middle of different factions”.

Myeni’s own evidence had posed “serious difficulties” for her defence as the versions placed before the court on her behalf kept differing.

The evidence presented did not reveal “one single legitimate reason why Ms Myeni, frustrated and ultimately caused the demise of the lucrative Emirates deal, which, if it could not have saved SAA, could at least have strengthened its financial position… considerably”.

“One cannot but suspect that there were some other forces at play behind the scenes, but it is not for this court to venture into the realm of speculation,” said Tolmay.

It was the view of the court that Myeni’s conduct in blocking the Emirates deal “satisfied multiple grounds of delinquency”.

“Not only did she deliberately or through gross negligence inflict substantial harm on SAA, but her belated attempts to justify her conduct show that she acted dishonestly, in bad faith and not in the best interests of SAA and the country.”

Myeni was also directed to pay the costs of the action “on an attorney and client scale, including the costs of three counsel” while the court fully indemnified Outa from these costs. DM