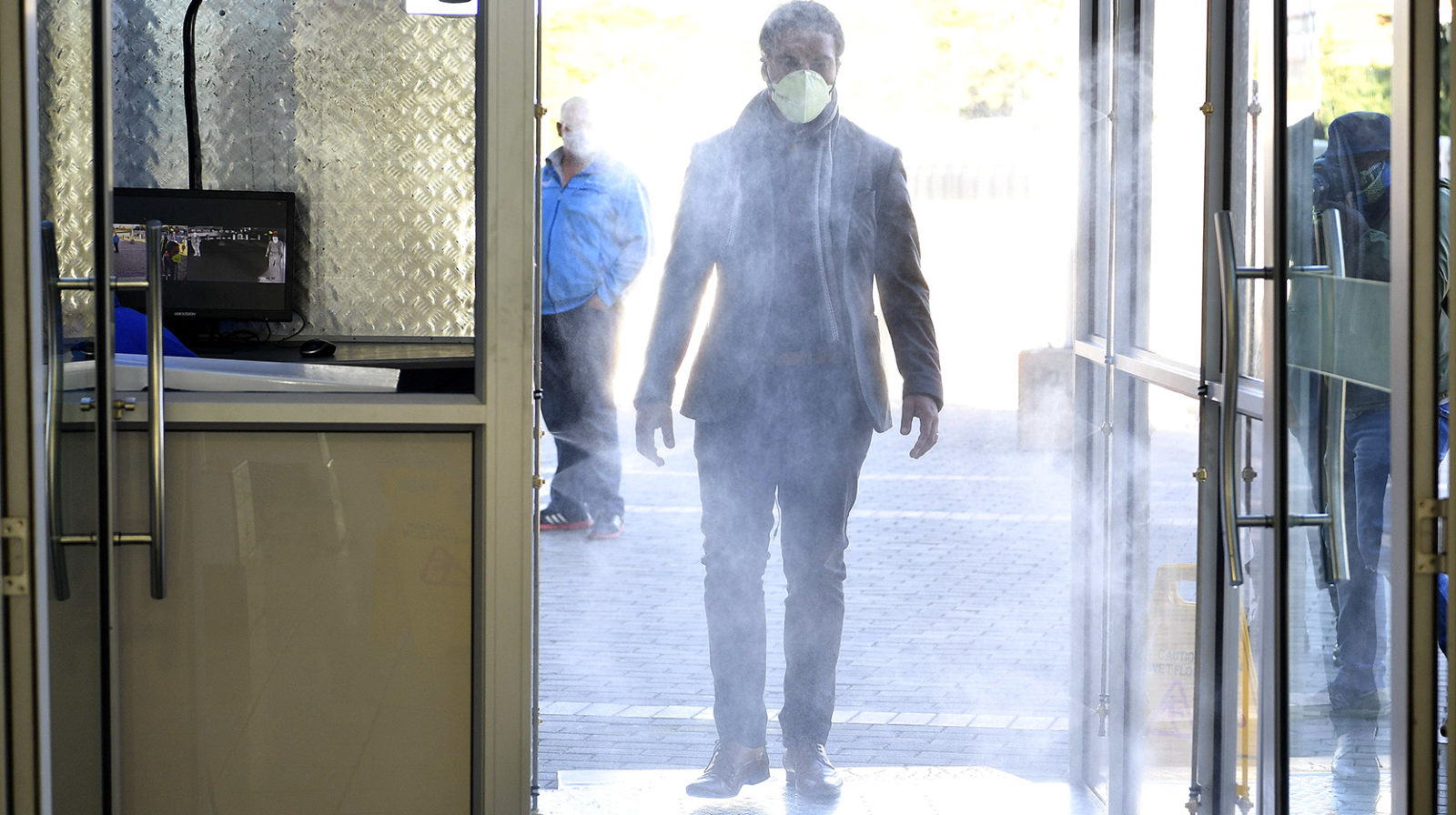 Having communicated with a number of companies who are marketing and selling these in South Africa, we have yet to get a straight answer regarding what basis they market these products on and what evidence exists on its effectiveness in preventing Covid-19 infection.

The global Covid-19 pandemic (the disease caused by SARS-CoV-2), has taken many countries by surprise. This is the major pandemic of the 21st Century that has now spread globally across geographic and socio-economic divides. The World Health Organisation (WHO) has called for calm, and systematic, measured responses to dealing with Covid-19 at the country level, however, fear and uncertainty persists in most societies.

The key challenge faced by all countries is slowing the rate of transmission of the virus to mitigate the overwhelming of health services. In the absence of vaccines or other therapeutics, the only armament available to us to do so are simple, evidence-based non-pharmaceutical interventions (NPIs). These include hand hygiene, social distancing and universal masking.

Unfortunately, this is being superseded by fear, stigma and the introduction of practices, which do not have significant effects on preventing virus transmission and may be harmful to the public. One such, is the use of disinfection tunnels.

Often driven by fractured knowledge, mixed messages, profit-driven advertising campaigns based on half-truths, and misinformation on risk perception via social media, commercial companies are capitalising and marketing costly disinfection tunnels at a variety of venues – as well as proposing indiscriminate fumigation of places.

The concept of spraying chemicals arose from vector control programmes, which use extensive spraying of waterways and homes to kill mosquitoes and other vectors during outbreaks of malaria, Zika, yellow fever and Dengue. While mosquitoes were effectively controlled, widespread spraying was stopped because of its detrimental effect on human health and the environment.

Fast forward to 2014 and the Ebola outbreak in West Africa. Led by fear and panic, chlorine spraying of the population, including healthcare workers (HCWs), was widely introduced in affected countries while in others, including South Africa (SA), spraying was part of the country’s infection prevention containment strategy, should Ebola be introduced into the country.

During the 18-month outbreak in Sierra Leone, damage to the eyes (58%), skin (52%) and respiratory tract (62%) was reported in HCWs. Clinical symptoms increased proportionately to the number of chlorine spray exposures, irrespective of the fact that HCWs were wearing full personal protective equipment (PPE) during each spray. For example, in two studies from the US, despite every cleaner using PPE, a  higher number of clinical respiratory and other symptoms were reported in those who worked with disinfectants compared with those who did not.

A disinfection tunnel is a means of spraying the public as it walks through a cubicle or tunnel with a chemical mist of variable composition, aimed at “disinfecting all exposed areas including hands”. It appears that the chemical used, its concentration and side effects are kept a secret.

Having communicated with a number of companies who are marketing and selling these in South Africa, we have yet to get a straight answer regarding what basis they market these products on and what evidence exists on its effectiveness in preventing Covid-19 infection. Trying to get any information from the internet also led to a blank wall because the chemical nature of these compounds or pertinent studies of the effects of these chemicals on the respiratory tract in humans are not available.

The WHO has very recently published its guidance on environmental disinfection and has condemned all outdoor environmental spraying and human spraying in the strongest possible terms. The Pan American Health Organisation (PAHO) has not only condemned the practice, but has provided a comprehensive table with side effects of known products used in tunnel sprays for humans.

A campaign to stop human tunnel spraying has published documentation from ministries of health from 12 countries mainly from Latin America, but also India, Malaysia and Philippines where spraying has been stopped.

South Africa has a long history of human rights grounded in legislation to protect its citizens. These include the Hazard Substance Act (1973); Occupational Health and Safety Act (1993) and the National Environmental Management Act (1998) to name but a few. It is therefore surprising that a country like South Africa would allow the spraying and misting of humans in public areas without concrete evidence, especially when knowing the mantra that “Covid-19 spreads via the respiratory tract”– we see this every day on the television and other media.

How then, can citizens of this country be exposed to being sprayed with chemicals without either evaluating the consequences or asking for expert advice on the effect of spraying such chemicals on humans?

Most worrying of all, we have now received reports of a number of South African private schools who are wanting to introduce such tunnels for learners returning to school. One was planning to use quaternary ammonium compounds (QACs), which are high on the WHO’s list of dangerous substances. We have, indeed, gone from the sublime to the ridiculous and without reservation condemn the adoption of such potentially harmful practices.

Let’s get back to basics – focus on the central interventions of social distancing, hand hygiene, universal masking, regular decontamination of surfaces at home and at work, and seeking medical advice if becoming symptomatic while self-isolating. We need to spend more time and money on improved messaging, working with hotspot areas to understand why the message is not getting across, listen to the community and its leaders, and use the ever growing evidence base to inform simple yet robust IPC practices. DM/MC

Shaheen Mehtar is Emeritus Professor at Stellenbosch University, specialist in infection prevention and control as well as a founder member and current chair of the Infection Control Africa Network (ICAN).

Shabir A. Madhi is Professor of Vaccinology and Director of the MRC Respiratory and Meningeal Pathogens Research Unit, University of the Witwatersrand.