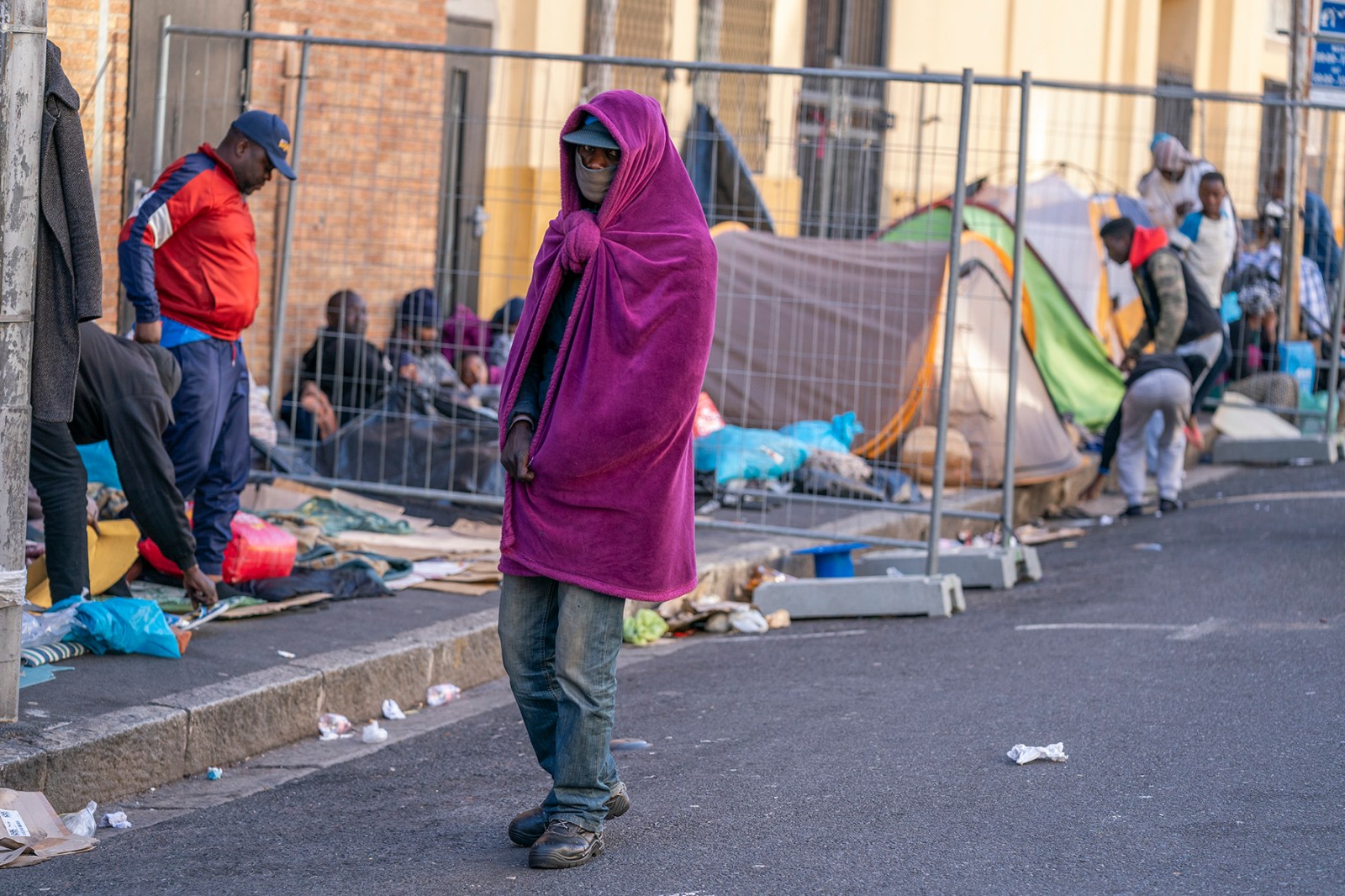 Starving and desperate asylum seekers and foreigners holding special permits have turned to phoning human rights organisations’ legal hotlines to ask for money for food, rent and electricity as they are excluded from social relief, barred from working and cannot leave the country because the borders are closed. An NGO advocating for the rights of asylum seekers and refugees has now turned to the high court to get this group of foreigners included in those qualifying for the R350 Covid-19 grant.

In court papers detailing the sheer desperation of more than a thousand people who phoned a legal hotline to beg for food, the Scalabrini Centre of Cape Town, an NGO advocating and assisting asylum seekers, migrants and refugees has asked the South Gauteng High Court in Johannesburg to compel government to extend the R350 Covid-19 social relief of distress grant to asylum seekers and special permit holders as well.

After the coronavirus outbreak was declared a national emergency by President Cyril Ramaphosa, he ordered a nationwide lockdown barring all but essential personnel from working. The hospitality industry, where many refugees and migrant workers were employed, remains closed. The country’s borders have also been closed indefinitely.

The introduction of the grant was announced on 21 April 2020 by Ramaphosa as an emergency six-month measure to assist those impacted by lockdown who are not receiving any other social relief. Only South Africans, permanent residents and refugees qualify for the grant, according to directions that were gazetted by the department.

This week, the South African Social Security Agency CEO Totsie Memela said in a statement that they had received close to 5 million applications for the special Covid-19 grant, but close to 50% of these were incomplete or duplicated.

In papers before court, Marinda Madikane, Executive Director of the Scalabrini Centre, said it made no sense why asylum seekers and those with special permits from Lesotho, Zimbabwe and Angola were excluded from the grant.

“Their suffering is immediate and irreparable,” she said.

She said they have asked the court to interpret the directions gazetted by the Minister of Social Development, Lindiwe Zulu, to include asylum seekers and special permit holders from Angola, Zimbabwe and Lesotho under those who will qualify for the grant.

She said there was an urgent need to provide social assistance to asylum seekers and special permit holders as they were unable to work due to lockdown and can’t return home because the country’s borders were closed.

Madikane said the exclusion of asylum seekers and permit holders from the grant was arbitrary, irrational and unreasonable as they were in the country legally.

On 22 April 2020, Sally Gandar, the head of advocacy and legal advisor at the Scalabrini Centre wrote to government asking them to reconsider the exclusion of asylum seekers and permit holders.

In their response to the letter, the Department of Social Development said it was a complex issue to extend the grant to these categories of foreigners as it impacted on migration, the disaster regulations and the national fiscus.

Madikane said that many asylum seekers and special permit holders were in desperate need and cannot provide for their families. She said the number of asylum seekers and foreigners phoning the centre to ask for food assistance had skyrocketed. In the past six weeks, they had 1,400 calls requesting food and financial assistance with rent and electricity.

Most of the people seeking assistance were self-employed or working in hospitality and in the restaurant industry. None could access government food parcels as requirements like an ID number made it impossible for them to access this type of assistance.

She added that many families have now gone two months without any income and families with children were also cut off from the school nutrition programme when schools closed. Even employees who qualified for UIF could not access payments if they were foreigners.

The acting director-general of the Department of Social Development, Linton Mchunu, said in a letter that they required until 30 June 2020 to provide a comprehensive response to the centre’s demands.

“Our clients simply cannot wait another six weeks,” Madikane said in an affidavit that was drawn up last week.

She said asylum seekers have valid permits and it was “through no fault of their own”, that their applications have not been processed by the Department of Home Affairs. In a recent report following an audit at the department, officials said that if no new applications are received, it will take another year for officials to get through all the existing applications.

The appeals board, who are hearing appeals against refusals, will take another 68 years to complete their work, according to the same report. Madikane further explained that Angolan and Zimbabwean citizens, and those from Lesotho who hold special permits are also deemed to be legally in the country.

She said they will argue that the distinction made by the Department of Social Development will violate their right to equality. “Asylum seekers are worse off than refugees as it is more difficult to find work due to the precarious nature of their immigration status,” she added.

Many asylum seekers could also not renew their permits before lockdown, according to Madikane. Home Affairs officials turned them away, saying they cannot open the office without personal protective equipment.

Nyiko Manyusa from Lawyers for Human Rights said his organisation and 11 others set up a legal hotline to assist people during the lockdown period. In the two weeks that the hard lockdown was extended, the line started receiving about 70 calls a day asking for food, he added.

“They were trying the legal hotline out of sheer desperation,” he said.

The court was also asked to accept anonymous affidavits from asylum seekers and special permit holders as they fear reprisal from officials from either Home Affairs or the Department of Social Development.

One asylum seeker from Rwanda said her husband had worked in a restaurant earning R6,000 a month before the lockdown, of which R3,500 was for rent and the rest for food and the care of their two small children. She said they have not had an income for two months now and live in fear that their landlord will kick them out.

The woman described the small box of groceries the family received from the Scalabrini Centre as “the first food they had in a week”.

“The children are desperately hungry,” she said. “We do not know where our food will come from next.”

She said the R350 grant will at least help them to survive.

A Somalian man, who is seeking asylum in South Africa as he could receive the death penalty in his home country for his sexual orientation, said he has become absolutely desperate during the lockdown.

“I have no community who can help me,” he said, adding that even the South African Somalian community have turned against him. He had been surviving on R50 to R200 a day that he made by cleaning people’s homes and doing other casual jobs, but could no longer work because of lockdown regulations. He lives with two other asylum seekers. Their landlord has now threatened to cut their electricity and water.

A Zimbabwean woman who worked as a waitress said she was shunned by her community for being gay. She has been unable to access UIF and was last paid in March 2020 when she received R1,400. She said she had been supported with groceries by the LGBTQI+ community, but only cooks every third day to save food and electricity.

She recently received a stipend for her community work and added that when she reached out to others in her community to ask how she can help, most said that they no longer had electricity.

It is expected that the court will hear the application on 17 June 2020. DM/MC