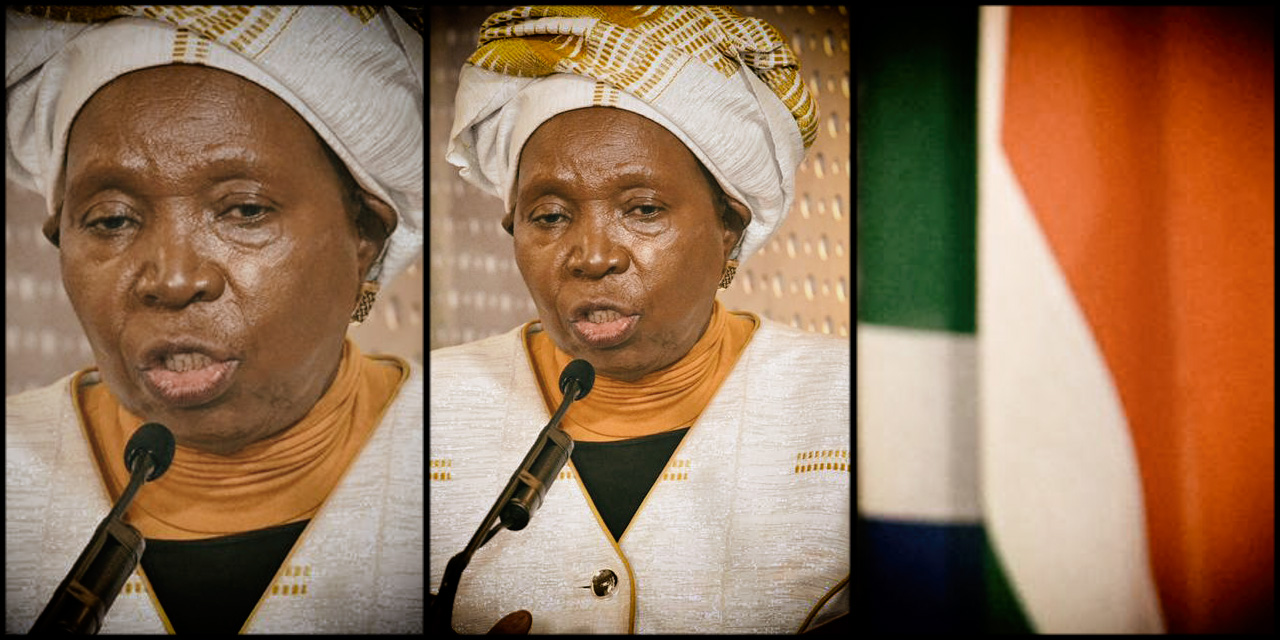 This is a summary of the trending, highest impact, and most active themes and their narratives related to social cohesion and division in South African public-domain social media conversations on 25 May 2020.

The continent was united in celebration of Africa Day as people came together in e-solidarity amid the devastating Covid-19 pandemic. The top post by reach and impact was President Cyril Ramaphosa’s message commending the continent: “As countries around the world battle to turn the tide against the pandemic, Africa has taken firm control of its destiny, by developing a clear strategy and raising financial resources from its member states.” The tweet received over 2,000 likes, retweets and comments.

#AfricaDay and #TheAfricaWeWant trended, and while most social media users commended the president for his leadership during the pandemic, some vented their frustrations around Level 3. Many asked why schools were being opened and alcohol sales being allowed, while others voiced their concerns around corruption and ineptitude and demanded their R350 social relief of distress grant payment.

Minister of Cooperative Governance and Traditional Affairs, Nkosazana Dlamini Zuma, received nearly 3,500 likes, retweets and comments with her tweet: “I wish all the children of Africa a happy #AfricaDay2020. As we face a global pandemic, our solidarity and unity will see us through. Our determination, creativity and resolve will drive the cultural and economic potential of our continent.”

But not everyone was in the mood for solidarity.

Responders attacked from the left, right and center on a range of topics, from continuing the ban on tobacco sales to lifting the ban on selling alcohol. #NDZMustFall trended on Twitter alongside a picture of the minister and her son: “I have nothing against tobacco… some of my dearest relatives are selling tens of millions of bootleg cigarettes during my lockdown!”

Twitter user @Tsentsho1’s frustration with the system was evident in his reply to Nkosazana Dlamini Zuma: “There’s nothing happy about Africa. Most Africans are forced by political situations to stay out of their countries. There’s wars, hunger, there’s no jobs. Only politicians and their families will be happy about Africa day.”

As Africa’s political leadership urged its people to unite against the virus, many remained divided over decisions that affect them directly.

A post by CNN Africa on Twitter, about a benefit concert in honour of Africa Day to raise funds for Covid-19 relief, was the 4th top post by reach on the day. With almost 1,500 likes, retweets and comments, the post garnered much goodwill and positive engagement.

The concert was hosted by British actor and writer Idris Elba, along with some of Africa’s biggest stars, including Trevor Noah, reigning Miss Universe Zozibini Tunzi, and rapper Sean Paul. The event was hosted on @MTVBaseAfrica’s YouTube channel and proceeds went to Unicef Africa and the World Food Programme’s Covid-19 relief efforts.

South African DJ Thato Sikwane, also known as DJ Fresh, was part of the line-up and his post promoting the event was the 12th top post, reaching over 97,000.

Level 3 was once again the top topic by volume as South Africans shared their thoughts about life under new rules from 1 June, and political parties opposed some regulations.

Business owners who will be allowed to operate again during Level 3 showed their support: @tshepomekoa thanked the president for easing the lockdown and allowing 40 employees who were laid off to return to work. This post was retweeted more than 1,300 times and received over 7,000 likes. 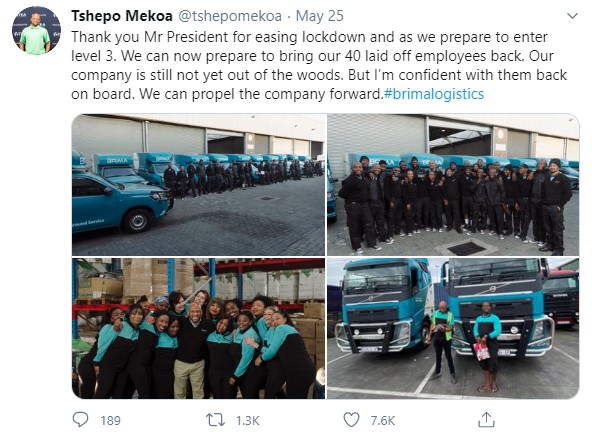 Western Cape Premier Alan Winde welcomed the Level 3 announcement and the classification of some areas as coronavirus hotspots. An article by SABC news drove this conversation.

The EFF’s Mbuyiseni Ndlozi and Floyd Shivambu drove conversation on Twitter about reopening schools and the economic sector too soon, in the absence of sufficient scientific data on how best to contain the spread of the virus. Shivambu’s post was retweeted 900 times and received 3,700 likes while Ndlozi’s post received a similar number of responses.

At 08:00 @News24’s link to “Explainer | Lockdown Level 3: What you will be allowed to do and what you won’t” was retweeted 10 times and trended as the top topic by volume for the day within the Level 3 conversation.

The post in anticipation of exercise restrictions being lifted shows people exercising with their dogs. Trending as the 10th most popular topic by reach, with 198 retweets and over 1,000 likes, a post by @ChristoThurston warned that the move to Level 3 will bring a higher risk of viral infection. He urged social media users to be much more cautious in Level 3, compared to earlier lockdown levels.

The Western Cape continued to trend in the coronavirus conversation: it was the 6th biggest topic, with mixed sentiment over the province’s readiness to move to Level 3 on 1 June.

As the number of coronavirus cases continued to rise in the Western Cape, the conversation turned to insufficient resources in the province. Premier Alan Winde’s statement about the backlog of tests, standing at 18,000, was a top conversation. The most retweeted media item was a tweet by @foreverSbu about calling nine hospitals to find an ICU bed for a family member who has Covid-19. His tweet ending, “that province is not ready for level 3” was liked 605 times and retweeted 721 times yesterday.

@LudidiVelani tweeted that two primary schools in the Western Cape – in Delft and Kraaifontein – have reported that their staff tested positive for Covid-19.

The top media item within the ‘Western Cape’ conversation by reach was a Sowetan Live article explaining that the high number of cases in the Eastern  Cape was due to people travelling in from the Western Cape.

@SAfmnews tweeted that Mediclinic Cape Town was closed for new admissions, after a number of their healthcare workers and other service providers tested positive. This tweet was retweeted 54 times and liked 42 times. Responses to the tweet tended to be negative about the easing of lockdown regulations on 1 June.

Public sentiment was mixed over whether the Western Cape was ready for Level 3. @gavdavis tweeted that Cape Town had been identified in President Ramaphosa’s speech as a hotspot, suggesting that, during the next pandemic, regions who want to open their economy should test fewer people. This was retweeted 117 times and liked 383 times. Responses to his tweet were not all supportive – some pointed out that the Western Cape did in fact have the highest infection rate, and that the testing data was accurate.

Trending as the 5th highest topic by volume, and 3rd topic by burst, were cell phone giveaways orchestrated by accounts that use famous South African celebrity names to hashjack highly relevant hashtags in the South African Covid-19 conversation. 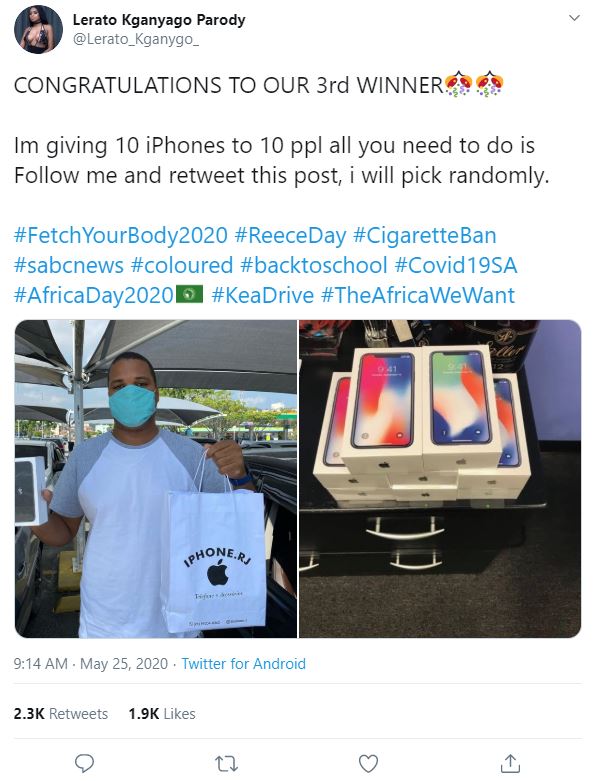 Dominating the social media conversation on the topics of #CigaretteBan #backtoschool and #Covid19SA were tweets that had very little to do with those topics. According to www.cmssocial.com, hashjacking is when someone “jacks” a hashtag to promote their own social media page or product. Since the weekend, an account under the name @Lerato_Kganyago_, which expressly states that it has no affiliation to the real DJ Lerato Kganyago, has been driving volumes related to these topics with thousands of likes, retweets and comments over an iPhone giveaway to 10 people. This Twitter user is also the self-proclaimed “First Lady” of Black Twitter.

Following in the footsteps of the Lerato parody account, @Bonang_mm (not the real Bonang Matheba) tweeted that they would be giving away 10 Huawei P40 mobile phones. It appears that celebrity names are being targetted by people who want to spread their own messages through the large followings of others by creating a fog of confusion around real, fake and “borrowed” hashtags. DM