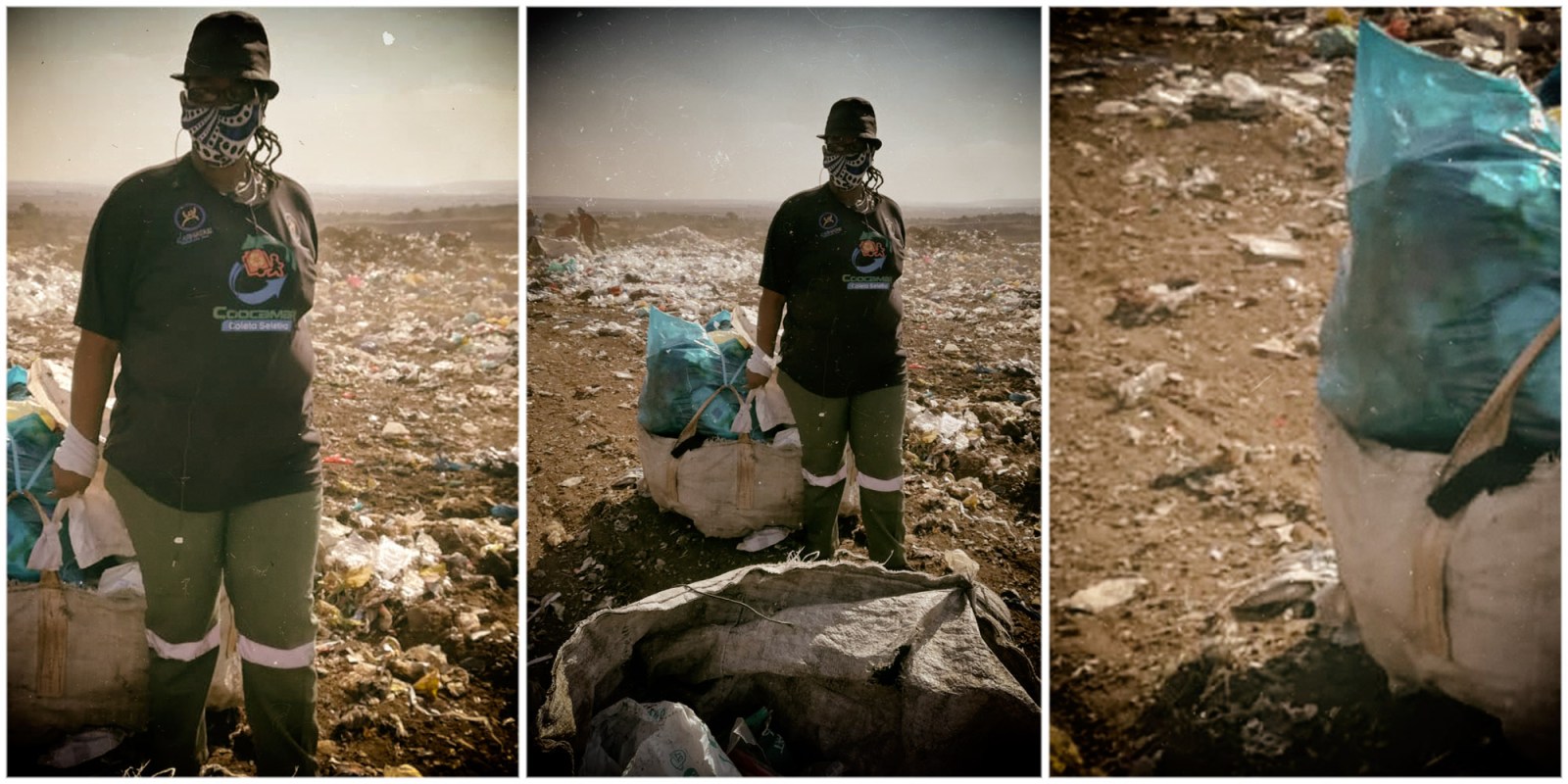 Eva Mokoena, 36, a recycler from Orange Farm in the South of Johannesburg. Mokoena has been in recycling for the past 25 years. (Photo: supplied)

Lawyers for Human Rights has taken up the case of recyclers who claim lockdown policies discriminate against them, which has resulted in them being harassed by security officials.

The organisation will also be challenging directives issued by the department of environmental affairs on 14 May, that require reclaimers to apply to the municipality for permission to work, and to present identity documents or valid passports, with the requisite permits (asylum seeker or refugee permits), on request.

Recyclers claim that they have been assaulted by security officials during the lockdown and that their trolleys have been confiscated. They say they were told they cannot operate and have been verbally abused. They allege the abuse and confiscation of their trolleys happened in Tshwane.

A recycler who spoke to Daily Maverick from Pretoria on 25 May said he and his colleagues suffer daily verbal abuse at the hands of police from both the Tshwane metro police department (TMPD) and the South African Police Service (SAPS).

TMPD spokesperson, Superintendent Isaac Mahamba, declined to comment on the claims, saying he needed more information. When told that the recyclers maintained they were intimidated and abused in a place called Plastic View, Mahamba again requested more details.

“I cannot comment if there is no form of proof. How will I know those people were indeed members of the TMPD? I cannot comment unless I am sure it’s our members,” said Mahamba.

Meanwhile, Lawyers for Human Rights is taking on the City and its metro police, challenging their confiscation of the recyclers’ trolleys.

This is in connection with an incident on 13 May in which law enforcement officials asked reclaimers for permits. When they were unable to produce them, they were allegedly verbally abused and their trolleys were confiscated.

Louis du Plessis, an attorney at Lawyers for Human Rights, confirmed to Daily Maverick on 24 May that they had issued a letter of demand to the City to undertake that recyclers operating in and around Tshwane would be allowed to operate without hindrance from law enforcement officials.

“We will be in court on Tuesday,” said Du Plessis.

Leader of the reclaimers, Eli Kodisang, told Daily Maverick that he had received calls about intimidation in Tshwane.

“We have received reports from Tshwane where reclaimers said security officials were assaulting them and confiscating their trolleys, and we believe this kind of behaviour will continue,” said Kodisang.

Without their trolleys, the reclaimers’ ability to earn a living is severely diminished.

Kodisang also noted the discriminatory nature of the regulations, which essentially prevent recyclers without South African ID documents or valid passports or permits from operating.

Kodisang said many of his undocumented Basotho colleagues, who have been involved in recycling for decades, will be affected by this. He said the regulations need to accommodate everyone so that recyclers do not turn to crime to make ends meet.

“Implementing lockdown policies which deprive people of the right to work and feed themselves will cause tensions in communities. We must do away with divisive policies that could lead to divisions and xenophobic tensions,” said Kodisang.

“This is not the time to discriminate based on immigration status,” Kodisang said.

Lesotho national Jafta Raselemane, a reclaimer based in Tshwane, is watching the court proceedings closely.

“I was holding my breath that we are permitted to operate because I have nothing left. I have no food and cannot even afford a mask to protect myself from contracting Covid-19. The borders are closed, I cannot go home,” said Raselemane.

Harassment during lockdown is just one of the challenges facing the recyclers. Coronavirus is also a major concern.

“We are in great danger and kindly ask the city to also provide us with personal protective equipment,” said Louis Mahlangu, a reclaimer from the Vaal.

Mahlangu has been in recycling for the past 18 years after he was forced out of his job by an injury sustained in a taxi accident.

Recyclers are provided for in Part P of the Government Gazette under Level 4, which reads: “Recycling of glass paper, plastic, metal, tyres, and such others as determined by directions, are permitted at 50% capacity. Informal recyclers will be permitted to resume operations.” Despite this, recyclers were not being allowed to operate in the City of Johannesburg.

Spokesperson in the office of the Mayor of Johannesburg, Mlimandlela Ndamase, told Daily Maverick that recyclers were “collecting waste illegally”.

Recyclers in Joburg also said the lockdown had taken a toll on them and they were yet to benefit from food aid for the needy.

Recyclers have attempted to continue working in Joburg’s northern suburbs, but they have been met with resistance from some residents.

“Residents of the Johannesburg’s northern suburbs do not understand what recyclers do, and they did not want us coming into the neighbourhood because of Covid-19. They don’t feel safe so they call security and kick us out,” said 34-year-old Luyanda Hlatshwayo.

Hlatshwayo has been recycling for nine years. He said he chose recycling because it seemed the easiest way to make some cash, in that one does not need qualifications to do the work.

“It’s the quickest way to start making money today. You don’t need any qualifications, all you need is a trolley,” said Hlatshwayo. He reiterated the need for recyclers to be given PPE.

Ndamase, however, said the city would not provide recyclers with PPE because they were not employees of the city.