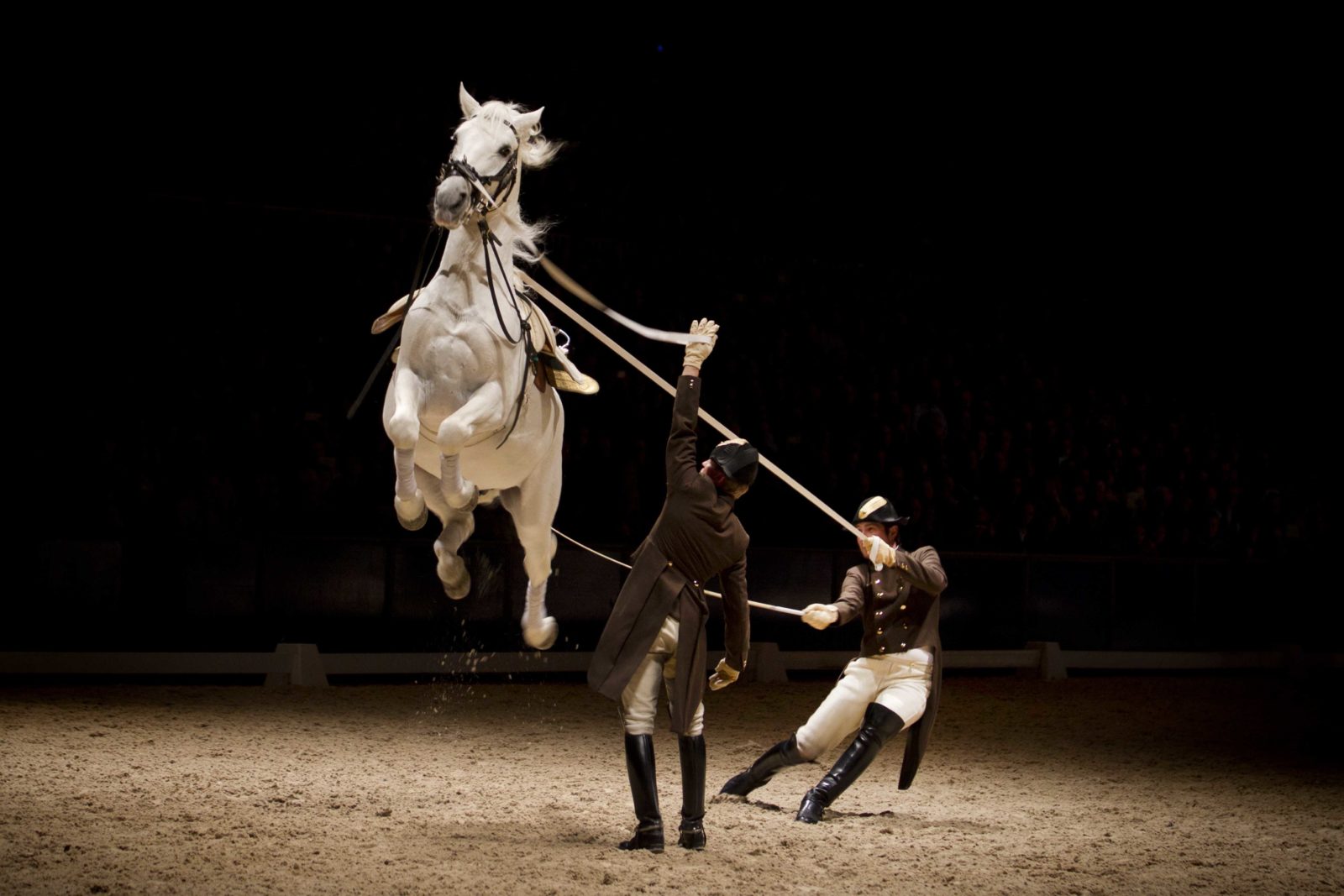 A Lipizzan horse executes a Capriole during a show of the Spanish Riding School from Vienna, Austria, at the Ziggo Dome arena in Amsterdam, The Netherlands, 29 November 2014. The Spanish Riding School, known for its white Lipizzaner horses and performances dubbed the 'White Ballet' representing the 'haute ecole' of classical Renaissance equitation, will celebrate its 450th anniversary in 2015. EPA/JEROEN JUMELET

As World War II drew to a bloody close in the spring of 1945, one last desperate mission was launched – to rescue an unusual and precious band of prisoners on the Czechoslovakia-German border.

From the depths of the Bohemian forest in Czechoslovakia, on the morning of 12 May 1945, came the sounds of boots, whinnying and coughing engines of repurposed military vehicles. As the source of the noise came into view, it took the shape of a most unlikely procession, in the ranks of which were some of the most prized horses in the world: 100 top Arabians, thoroughbred racehorses, hundreds of Russian Cossack horses and 350 rare Lipizzaners, the white “dancing horses” of Vienna.

Ridden, herded and driven through the forest, under fire from the remnants of the defeated German Waffen-SS and sundry lone snipers, the extraordinary group had set out from Hostau, a town in Czechoslovakia, at dawn.

This was Operation Cowboy.

The endeavour was noteworthy for another reason: it was one of only two known occasions in WWII when US and German soldiers – victor and vanquished – set aside their enmity to face down a common threat. War-weary American soldiers, alongside a motley band of 400 POWs, disaffected Russian Cossacks and a handful of Germany turncoats, all joined in the rescue effort. A slew of obstacles faced them: the last pockets of German resistance; Soviet soldiers eager to claim their occupation zone; renegade Czech partisans.

But the drama had begun years earlier.

Based in Vienna, the Spanish Riding School had taken its name from the Spanish horses that were the foundation of the Lipizzan breed. Among the purest-bred performing horses in existence, theirs was an unbroken lineage dating back to 1572 under the patronage of the ruling Hapsburg dynasty. They were world-renowned as the finest exponents of “haute école” – classical, choreographed dressage, demanding supreme skill of both rider and stallion.

At the start of World War II, Vienna was one of the many bombing casualties. Colonel Alois Podhajsky, the then director of the Riding School in the Austrian capital, fearing for the horses in his charge, evacuated most of the stallions from the city to St Martin, some 160km away.

The high command of Nazi Germany, then in charge of Austria, had its own ideas, in 1942 transferring most of the Lipizzaner breeding mares to Hostau, where they planned to establish a breeding programme to create an equine master race. But things didn’t go as planned, of course, and at the Yalta conference in February 1945 the US, UK and Russia had their collective eye on the imminent end of the war – and decided how Europe should be divided up among them. Czechoslovakia was to be allocated to the Soviets.

By April of 1945, the Red Army was on the march to take over the region and Hostau lay directly in its path. Knowing that the horses were at risk – the Russians had earlier turned a valuable Hungarian herd into horse meat to feed their troops – the German officer in charge of the stud farm appealed to the Americans, led by Colonel Charles Reed, to get the horses to safety.

Some 40km west was General George Patton’s US Third Army. Reed contacted Patton – himself a lifelong horseman and former Olympic equestrian competitor – who without hesitation ordered: “Get them. Make it fast.” As Patton later reflected in his diary: “It is probably wrong to permit any highly developed art … to perish from the earth.”

Reed asked Captain Thomas Stewart, a veteran from his division (who’d survived the Normandy landings the year before), to negotiate surrender from the Hostau German commandant, Hubert Rudofsky, who was initially reluctant to do so but faced an internal rebellion.

“His staff,” later recalled Louis Holz, chairman of the board of the US 2nd Cavalry Association, “keenly understood the difference between surrendering to the Russians [who were reputed to be merciless in victory] as opposed to the Americans, and they persuaded Rudofsky to rather accept the American terms.”

And so, on 28 April, a task force of approximately 180 US soldiers set off, led by Captain Stewart. An artillery barrage cleared the way through German defences and, miraculously, the column reached the stud farm. Although the farm was temporarily secured, the horses were still in danger – the weary and hungry Red Army was approaching fast.

The next step was just as critical, and risky: the horses had to be moved, again under sniper fire, to safety behind the US lines. Stewart now faced a huge challenge. He did not have enough men to secure the stud farm and the town of Hostau as well as the road back to US lines, so he had to recruit extra manpower.

He recruited POWs that Germany had been using as labourers – British, New Zealanders, French, Poles and Serbs. All eagerly volunteered to help and were immediately handed captured German weapons. Stewart then approached some anti-communist Russian Cossacks in the area, who quickly signed up to help. He also asked Rudofsky for some of his own men to join in the defence and promised to re-arm them if they pledged to serve under US authority. They, too, agreed.

On 12 May, Operation Cowboy began. About 350 horses were herded in small groups, with US vehicles positioned in front and behind, with a band of Polish, Czech and Cossack horsemen as outriders. Young colts were with their mothers, and mares heavy in foal were moved in trucks.

Against the odds, the evacuation was well organised and executed: US soldiers had closed off all major intersections; stallions and mares were herded separately; the groups set off at 20-minute intervals to avoid bunching; and rest stops, where there was plentiful water and grazing, had been reconnoitred in advance. The fastest groups made the journey in two days; the slower group, which included mares and foals, arrived a day later.

The group made its escape without a moment to spare: Soviet tanks arrived on the eastern edge of Hostau just as the Lipizzaners and Stewart’s “Foreign Legion” rolled out of town.

And Reed played his part. During the night of 25 May, some 60 trucks arrived at Saint Martin. Reed had assembled as many captured German vehicles as possible and had them outfitted to carry the precious cargo deeper into safe US-held Austrian territory.

A few months later, 244 Lipizzaners of the Spanish Riding School were reunited in Wels, Austria. An emotional Podhajsky tried to thank Reed, who replied, “I have only acted as a fellow rider should. And I am convinced that you would have done the same.”

What did it take to pull off a mission such as this? Courage, certainly; a little luck – that a cavalry division was in the region at the critical time; a willingness by weary troops and POWs to participate in an unprecedented joint effort; and something almost indefinable, which transcended the misery of war.

Asked why he persevered with the mission when the war was effectively over and the 2nd Cavalry Group would have been excused for refusing to play any further part in it, Reed said simply: “We were so tired of death and destruction,” he said. “We wanted to do something beautiful.” DM/ML

Postscript: The stallions finally returned from their temporary home in Wels to Vienna in 1955, accompanied by Colonel Podhajsky, who remained director of the school until his retirement in 1965. The school’s Lipizzaners continue to perform their dressage routines, to music by Mozart, Strauss and Tchaikovsky, throughout the year, apart from their annual July-August holiday. General George Patton died in Germany following a car accident in 1945.

Hummertime, and the living’s not easy: The world’s most hated car is back

The Book of ProVerb: Words of wisdom in Tebogo Thekisho’s memoir

Of ‘Grey Gentlemen’ and School Secrets: An excerpt from Deon Wiggett’s new book, My Only Story