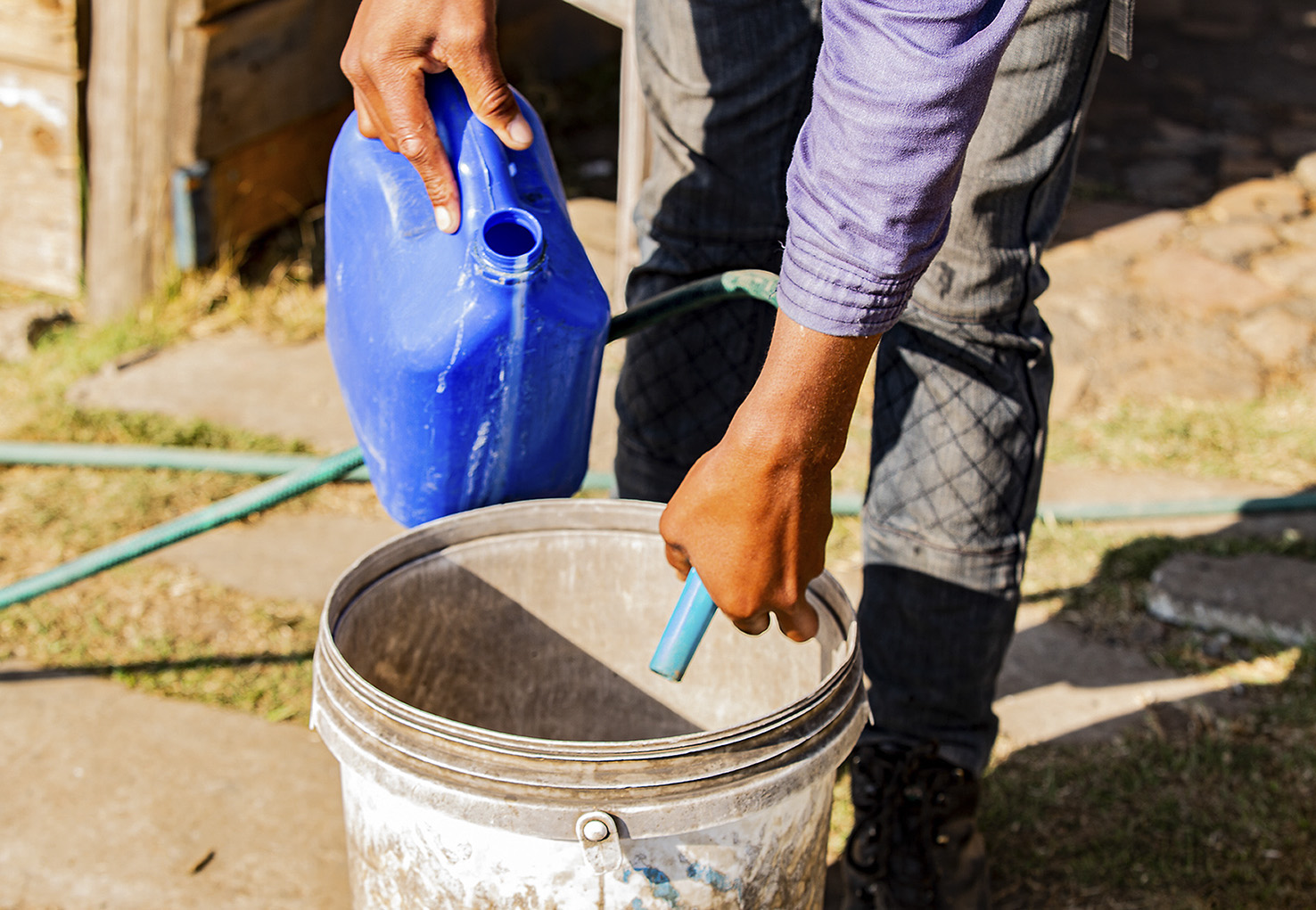 The erratic supply of clean drinking water was one of the grounds on which the Unemployed People’s Movement (UPM) obtained an order in the Makhanda High Court that the municipal council should be dissolved ‘forthwith’.(Photo: Gallo images / Oj Koloti)

Makhanda has suffered a second big water outage in a month as the town’s waterworks failed. Some areas have been without water for five days now. This comes after countless efforts and millions of rands have been spent to fix the waterworks.

Residents in parts of Makhanda in the Eastern Cape have not had water for five days after the town’s main water treatment works failed on 20 May 2020.

At a time when the government is asking residents to regularly wash their hands, cable theft and vandalism also led to other parts of the Eastern Cape experiencing water outages.

Residents of Makhanda East have been without water for the past five days. This is the second time during May that problems at the waterworks – that were extensively refurbished in January 2019 – have caused water outages in the town.

The erratic supply of clean drinking water was one of the grounds on which the Unemployed People’s Movement (UPM) obtained an order in the Makhanda High Court that the municipal council should be dissolved “forthwith”. Last week, Judge Igna Stretch refused both the provincial government and the Makana municipality leave to appeal this ruling.

Ayanda Kota from the UPM said the water dried up on 20 May and they haven’t had water since then. In the first week of May, desperate residents fetched water from the drains where their cattle were drinking as another failure at the waterworks caused an outage that lasted for days.

The Makana municipality did not respond to questions, but said in a statement to residents that they were experiencing “challenges” at the James Kleynhans Water Treatment Works and a later statement added that workers were “trying to get the waterworks going again”. It added that water was distributed to town with four trucks.

An update on improvements to the town’s infrastructure supplied as a response to the High Court’s judgment stated that the waterworks started malfunctioning in January 2019. It could no longer produce 10 megalitres of water per day, but only three to four.

“Upon investigation, it became apparent that serious intervention was required and quick action had to be taken. All facets of the treatment process had to be attended to,” the statement read. This included the installation of a new pump that failed earlier in May.

At the time, they called for an independent investigation to establish the primary cause of repeated water outages, where funds allocated to address water supply challenges had been spent with no accountability on the part of officials.

According to a statement by the municipality, the upgrade of the water treatment works will be completed by 2021.

Professor Phillip Machanick, chairperson of the Makhanda Residents’ Association, confirmed the water outage. “We had a breakdown at the main water plant a few days back; it is repaired now, but it takes a while for the system to top up again. A few areas are still reporting outages, but I hope it will be cleared by tomorrow [May 26],” he said.

Despite millions in public funds being spent on upgrading the town’s water infrastructure, problems persist. In November 2017, members of the UPM, led by its late president Gladys Mpepho, addressed a memorandum to the Makana municipality, its council, the mayor, the acting municipal manager and the provincial department of cooperative governance calling for corrective action and accountable governance.

At the time, they called for an independent investigation to establish the primary cause of repeated water outages, where funds allocated to address water supply challenges had been spent with no accountability on the part of officials.

By the next year, 2018, according to a letter addressed to the municipality by the Legal Resources Centre, water interruptions “continue to plague hundreds of households”.

In 2019, the premier’s office also provided funding for the involvement of Amatola Water and the Eastern Cape Development Corporation (ECDC), tasked with the upgrading, rehabilitation, refurbishment, operation and maintenance of basic service infrastructure supplies of electricity, water and sanitation.

In her judgment, Judge Igna Stretch summarised the involvement of the Amatola Water Board as follows: “Amatola has involved experts who ensure that the water quality is acceptable and that the treatment plant operates at full capacity. Bulk water is extracted from the Fish River and delivered to the eastern part of Makana which is a major problem area. The ECDC assists in the implementation of sewer infrastructure upgrades. The assistance of Amatola would be for a period of three months after which an assessment would be conducted to inform the way forward.”

Over the weekend, several areas, including Bhisho, King William’s Town, Phakamisa and Berlin were without water after a substation was vandalised.

The Department of Water and Sanitation also provided R237.6-million as a regional bulk infrastructure grant for the waterworks to be upgraded.

“It is averred that this programme was completed in March 2019. The treatment works are currently operating at 150% of its capacity but still cannot supply Makhanda’s requirements,” Stretch said in her judgment.

A spokesperson for the Amatola Water Board, Nosisa Sogayise, said the current problem in Makhanda fell “outside of their mandate”.

She said the water board has been appointed as the implementing agent for the national government’s water crisis plant during the Covid-19 pandemic, but has used up almost all the allocated funds they had for water carting, and the supply and installation of water tanks.

“The Minister instructed departmental officials to provide water to all communities in the province through Amatola Water Board. That propelled the delivery of water tanks and water trucks throughout the province especially for areas that are without reticulation infrastructure to access water. Amatola Water is responsible for the supply of water tanks and procurement of water carting services as an interim measure to augment water supply in all local municipalities. This is meant to supplement water supplied by district municipalities to fulfil their mandate as Water Service Authorities.

“The Eastern Cape is a rural and drought-stricken province with mostly aged people. This intervention is therefore designed to control the spread of the virus by protecting mostly the vulnerable and elderly in our province.”

Sogayise added that the Amatola Water Board is engaging with the Department of Human Settlements, Water and Sanitation for additional funds in order to continue supplying water to communities.

Over the weekend, several areas, including Bhisho, King William’s Town, Phakamisa and Berlin were without water after a substation was vandalised.

“Amatola Water is busy trying to source the cable and is not sure when it will be available as some of the suppliers are still on lockdown. We urge communities to safeguard government infrastructure so that communities are not disadvantaged in getting the services.

“This continuous vandalism costs communities their water supply at a time of Covid-19 where people are expected to wash their hands more often as part of their contribution in flattening the curve. People cannot afford to stay without water at this difficult and trying time. We urge communities to work closely with South African Police Services to curb this kind of behaviour as the matter has been reported to the police,” Sogayise said. DM/MC