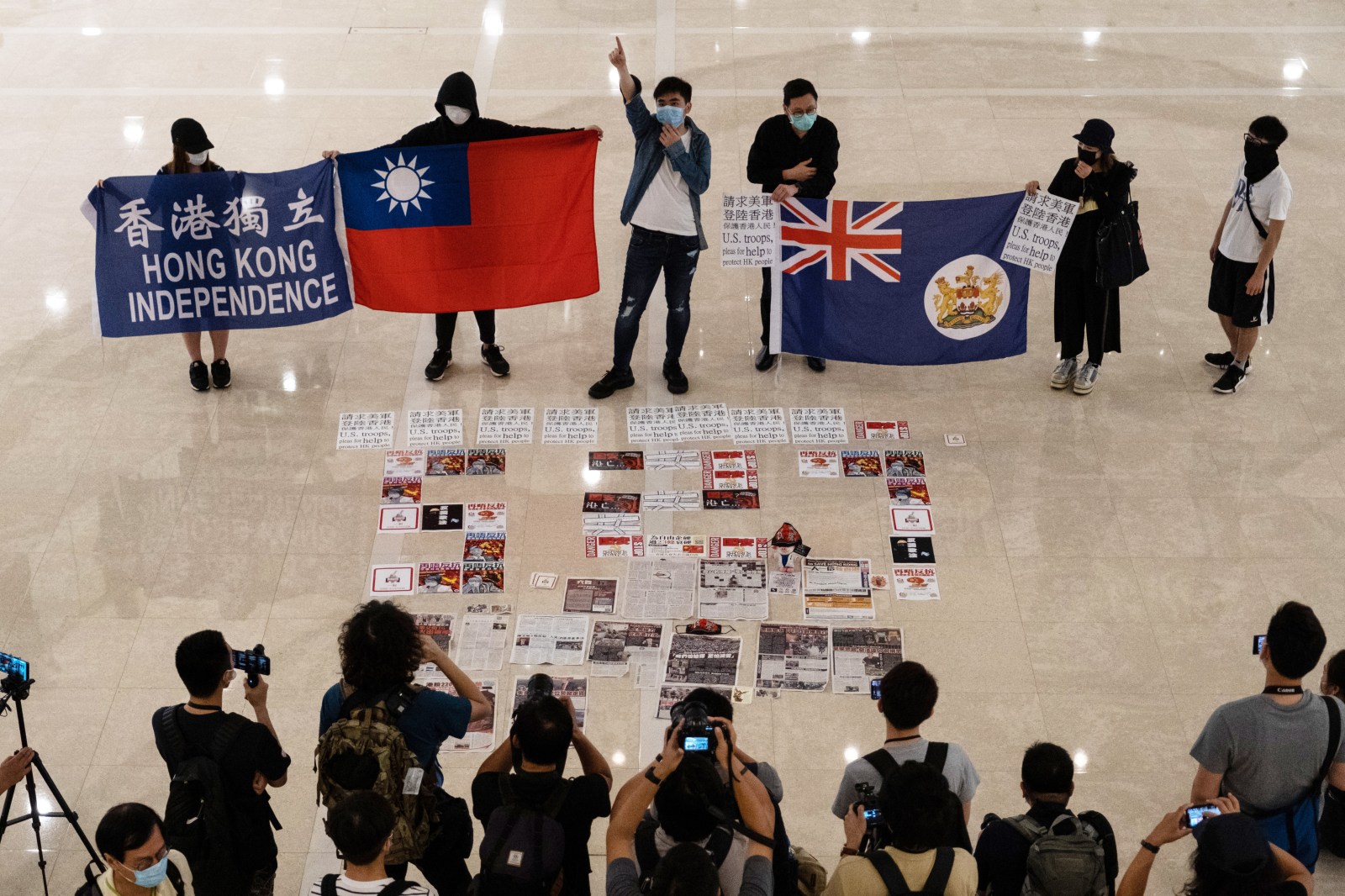 Demonstrators hold a colonial-era Hong Kong flag, right, during a protest in the International Finance Center shopping mall in Hong Kong, China, on Monday 25 May 2020 against a planned national security law. The biggest erosion of Hong Kong autonomy since China took control of the former British colony in 1997 has alarmed democracy advocates and foreign businesses who fear the city will lose its independence from the mainland. (Photo: Roy Liu / Bloomberg via Getty Images)

As China gears up to sink its claws deeper into Hong Kong, the world weighs up how best to respond. The pro-democracy movement also has some hard choices to make.

China’s Two Sessions meeting might be the biggest event of the Asian giant’s political year, but it’s usually not very exciting. The dual meetings of the National People’s Congress and the Chinese People’s Political Consultative Conference are low on spontaneity and high on long speeches and applause. However, 2020’s session – two months late because of the Covid-19 outbreak – has already made history, and is reverberating through the global system.

The reason is that it’s rubber-stamping a set of security laws aimed at playing a more direct role in Hong Kong, including to counter-protests, in the name of protecting China’s sovereignty against foreign interference.

The decision will alter the “One Country, Two Systems” policy which has allowed Hong Kong to retain the independent courts and relatively free system that undergirded its status as a global financial centre. It also sidesteps Hong Kong’s government, raising questions about its future role. Now, everyone is watching how the city’s restive pro-democracy movement will respond, how Beijing will respond in turn, and where that leaves other global powers, not least the United States.

This is a knife-edge moment for Hong Kong, but it also has deep significance for the rest of us.

As the thousands of dark-suited party functionaries gather in the Great Hall of the People, they’re applauding an agenda transformed by the Covid-19 pandemic, which has shaken certainties underpinning the world’s second-largest economy to an unprecedented degree. It also gives a glimpse of a party facing more hostile attitudes from the rest of the world, and becoming more hostile in turn.

China’s economy has shrunk by 6.8% in this year’s first quarter, the first contraction since the initiation of quarterly records in 1992. In addition to the swift criticism on the Hong Kong issue, it is also facing a chorus of criticism from international governments, some of whom are using complaints about the pandemic’s origin in China to draw attention away from their own failures in containing the outbreak. And Beijing isn’t scared to hit back – Australia already faces cuts in its trade with China due to Canberra’s calls for reparations.

Criticism is nothing new in the US-China relationship, but the Hong Kong situation adds even more tension to a pairing already frayed by wrangles about Covid-19, a still unresolved trade war, and ongoing US attacks on Chinese tech companies. A growing chorus in the United States describes its current relationship with China as a new cold war. But the Two Sessions gives us a glimpse of what an actual cold war could look like – and it’s considerably chillier than China’s current relationship with the West.

The new approach to Hong Kong (which includes enhanced tools against “foreign interference’) makes clear a simple reality: while many so-called “dragon-slayer” commentators in the West describe the Party as a no-holds-barred autocracy, it has kept many weapons in reserve up to now. Being in a liberal, multilateral world order meant that even hawks in Beijing had to refrain from actions that would push it too far outside the global consensus. If its relationship with the West declines past a certain point, it loosens those constraints, possibly leading to actions that would, in turn, elicit similar reactions from other global powers. The result could be a succession of woes similar to those that beset the world during the actual Cold War – the developing world being forced into zero-sum choices between two global powers, and paralysing gridlock in multilateral institutions like the UN.

Love or hate these institutions (and there are many reasons to do both,) they are currently some of our best options for collective decision-making on emerging threats like Covid-19, and well-established ones like climate change. The escalation of tensions between China and the West means more temptations to hijack integrated global trade, health and other systems for nationalist ends, as we’ve already seen in the tit-for-tat trade war between the United States and China.

At present, warning lights are flickering left and right. US President Donald Trump has already declared that the US will react “very strongly” against new laws on Hong Kong, although nobody yet knows what that means. The announcement triggered immediate calls for sanctions from the US Congress, where hostility towards China enjoys rare bipartisan support. However, Trump has to weigh this pressure with his personal relationship with Chinese President Xi Jinping, which has been paradoxically warm, considering Trump’s often strident anti-Chinese rhetoric.

The United States is, of course, facing its own pandemic-fuelled economic crisis, and Trump (never a massive champion of democracy movements) would probably prefer to focus on finalising a trade deal that could save jobs in the US in the run-up to a crucial presidential election. But the Hong Kong issue adds volatility to a situation inflamed by nationalist pressures on both sides. Being “strong on China” is already a theme in the campaign, and it will only become more so as Fox News and Co weigh in. Both Beijing and Washington have used the other as a bogeyman to shore up domestic political support – a strategy that could limit their current ability to manoeuvre and de-escalate tensions.

If one can read a theme into this year’s congress (unwise in a process so opaque and scripted) it is the Party showing strength in the face of global challenges, a narrative Beijing has promoted through its donations of Covid-19 aid to Africa and elsewhere. In a moment of massive risk, it should remember that while strength can be demonstrated through action, it can also be exercised through restraint. DM

Dr Cobus van Staden is a China-Africa expert at the SA Institute of International Affairs. His focus on China-Africa relations is developed through the multi-platform China-Africa Project, which includes the China in Africa Podcast.