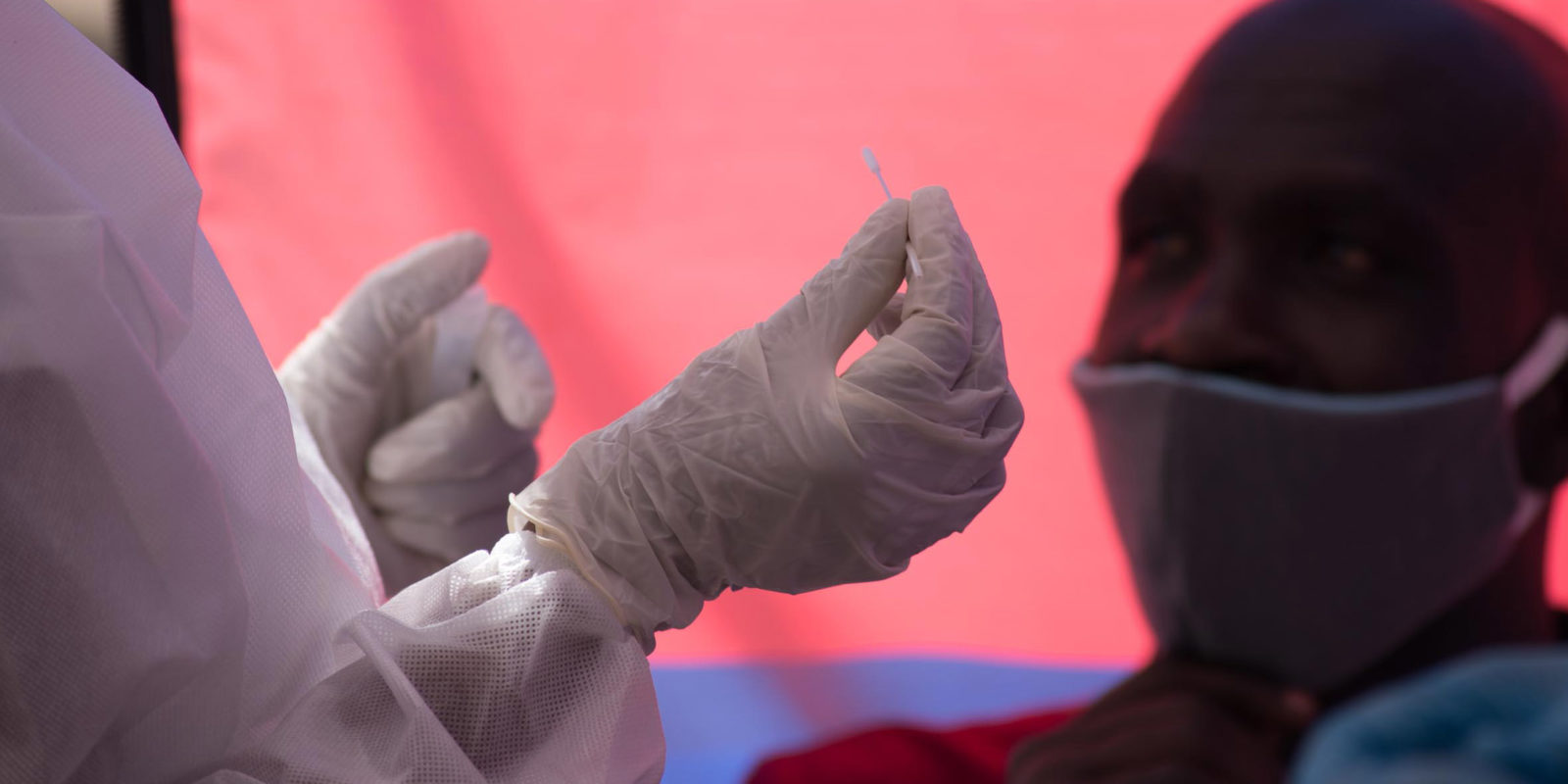 Spokesperson for the KZN Department of Health Ntokozo Maphisa said stigmatising people with certain diseases was a global phenomenon usually based on a lack of understanding, misinformation and misplaced fear. (Photo: ER Lombard / Gallo Images via Getty Images)

Some community healthcare workers (CHWs) in KwaZulu-Natal (KZN), screening for Covid-19 and tracing contacts of those who have contracted the disease, are concerned about rising levels of stigma.

In April, tensions escalated when angry residents burnt tyres outside Untunjambili Hospital, near KwaDukuza. They were protesting the admission of 10 people with Covid-19. The hospital is used as an isolation facility for people who test positive for the virus.

The incident prompted KZN Health MEC Nomagugu Simelane-Zulu to call for “the eradication of stigma against people who have been diagnosed with Covid–19”. Simelane-Zulu said in a statement at the time that the unrest is “uncalled for and may be a symptom of a lack of understanding of Covid19 – which needs to change”.

Similar protests were recorded in Pinetown and Chatsworth.

Community health worker Bandile Mbengani agrees that misconceptions about the disease are a big problem. Mbengani has been a CHW for 17 years and much of her work until now was around HIV and TB awareness, treatment and empowerment in Tongaat, north of Durban.

“At this stage, most citizens are aware of Covid-19 as a virus with the threat of death. They also know the precautions and some ways to protect themselves, with help from the media and the department of health. While the screening and testing of citizens to help track Covid-19 is underway, a lot more should be done to educate people on what happens after testing,” she says.

Mbengani is not doing house calls at the moment. She, along with other CHWs, are stationed at mobile testing facilities in communities. She told Spotlight her duties at the moment are focussed on screening and teaching people how to keep themselves safe.

“But people are frightened during and even after they test and screen. We don’t have enough information to help demystify stigma related to the virus, mostly because it’s new to scientists, health practitioners and community health workers. We need to highlight that diagnosing Covid-19 can only be done through testing.”

Echoes of HIV and TB stigma

Another CHW, Nontobeko Mhlongo, who works in Phoenix and Inanda, says the stigma echoes that which has long been associated with TB and HIV.

“The inevitable socio-outcomes caused by a global pandemic include fear and panic. We are once again witnessing a re-run – the spread of false information [focussed] on people infected by the coronavirus. Misinformation manifests itself into stigma, negatively labelling those affected,” says Mhlongo.

“One of the biggest lessons learnt about stigma from the HIV and the TB response is how destructive stigma is. We have a cure for TB and a treatment for HIV, but TB is still South Africa’s leading cause of death and there are many people living with HIV who are not on treatment. One of the major reasons for this is stigma.

“The perceived consequences of being known to have one of these diseases are so severe that people stay in denial, avoid care, and become sick,” says Best. This, she says, may hamper response efforts in the Covid-19 pandemic.

Convoy of police vehicles and an ambulance

Mhlongo has been a community health care worker for seven years. She tells Spotlight that, after her daily exercise routine, she starts her day by donning her protective gear. She then packs a large plastic bag with medical supplies, medical refuse bags and gloves that she will carry with her and use throughout the day. Returning after work, she takes extra precautions by removing all clothing before entering her home.

Mhlongo says that the fight to curb the spread of stigma attached to Covid-19 requires awareness campaigns advocating tolerance and acceptance.

“A convoy of police vehicles and an ambulance rushing to a house is immediately associated with Covid-19. This triggers fear among community members,” says Mhlongo.

“We’ve slowly been hearing worrying reports where foreign nationals and certain groups have been blamed for the spread of the coronavirus. Although these reported cases may be currently isolated, we need to constantly debunk false information during awareness campaigns and through door-to-door testing and screenings.

Nipping it in the bud

“People get information on the coronavirus through the media. This has always been a powerful tool, but it needs to be adjusted and balanced in order to correctly create awareness while minimising the risk of creating more unrest,” says Mzukwa.

“People relate better to what and who they know. For now, it’s a matter of nipping the stigma in the bud before more cases arise. The government, together with other health organisations leading the fight against Covid-19, must work closely with community leaders and influencers. These are the people who can help emphasise the importance of tolerance and empathy when dealing with this health crisis.”

Sazi Mhlongo, leader of the KZN Traditional Healers Association, says government denies the importance of the role of traditional healers in the community.

“Traditional healers are the first and primary option for millions of South Africans when they need health attention. The government should not discard this factor,” says Mhlongo.

“We play a critical role in curbing the spread and emphasising awareness. We want to work hand-in-hand with the department of health, but we are not being heard or seen. Traditional healers and their workers need to be properly equipped with protective equipment and relevant information to help address the coronavirus, along with its myths and misconceptions that often lead to discrimination – a deadly effect.”

But some CHWs are sceptical of the role of traditional healers. In a public meeting on Covid-19 hosted by the People’s Health Movement (PHM) in Cape Town earlier this year, some CHWs expressed concern that people will opt for traditional medicine and methods rather than accessing health care and testing as provided by health workers and in health facilities.

Tinashe Njanji, co-ordinator at PHM, says support towards and solidarity with poor communities in South Africa needs to be ramped up.

“At the primary level, the government needs to work closely with CHWs and community structures,” says Njanji.

“The social determinants of health also need to be addressed. This includes (providing) water and sanitation while ensuring that disadvantaged communities have adequate food and social support. Why do we see these issues with stigma in the poorer areas in the townships and not in places like Camps Bay?” Njanji asks.

“Poverty, lack of adequate shelter, food and services drives desperation and frustration and, because of that, people will use Covid cases as scapegoats.”

Spokesperson for the KZN Department of Health Ntokozo Maphisa said stigmatising people with certain diseases was a global phenomenon usually based on a lack of understanding, misinformation and misplaced fear.

“The Premier of KZN, Sihle Zikalala, and the MEC for Health, Nomagugu Simelane-Zulu, have sought to utilise every available media platform to educate the public about Covid-19, and to strongly discourage discrimination of those affected by the virus.

The department recognises the seriousness of stigma and always ensures that its public information, education and communication activities are packaged in such a way as to discourage stigma,” Maphisa says.

“When people know and understand an ailment, they become less likely to discriminate against those who are suffering from it.”

Zikalala has publicly spoken out against the growing stigma in KZN.

“We know from the history of diseases such as TB and HIV that stigma undermines efforts to prevent the spread of the illness and does more harm to sick people and society. When people fear prejudice and potential discrimination because of their illness, they are likely to resist screening and testing efforts and might be forced to suffer alone and in silence,” Zikalala said in a recent speech.

He condemned the spread of fake news and myths about Covid-19.

“South Africa has no reason to doubt information presented by the World Health Organisation, the Presidency, the department of health, and our scientists. This is not a time for conspiracy theories and the spreading of unscientifically proven ideas.” DM/MC