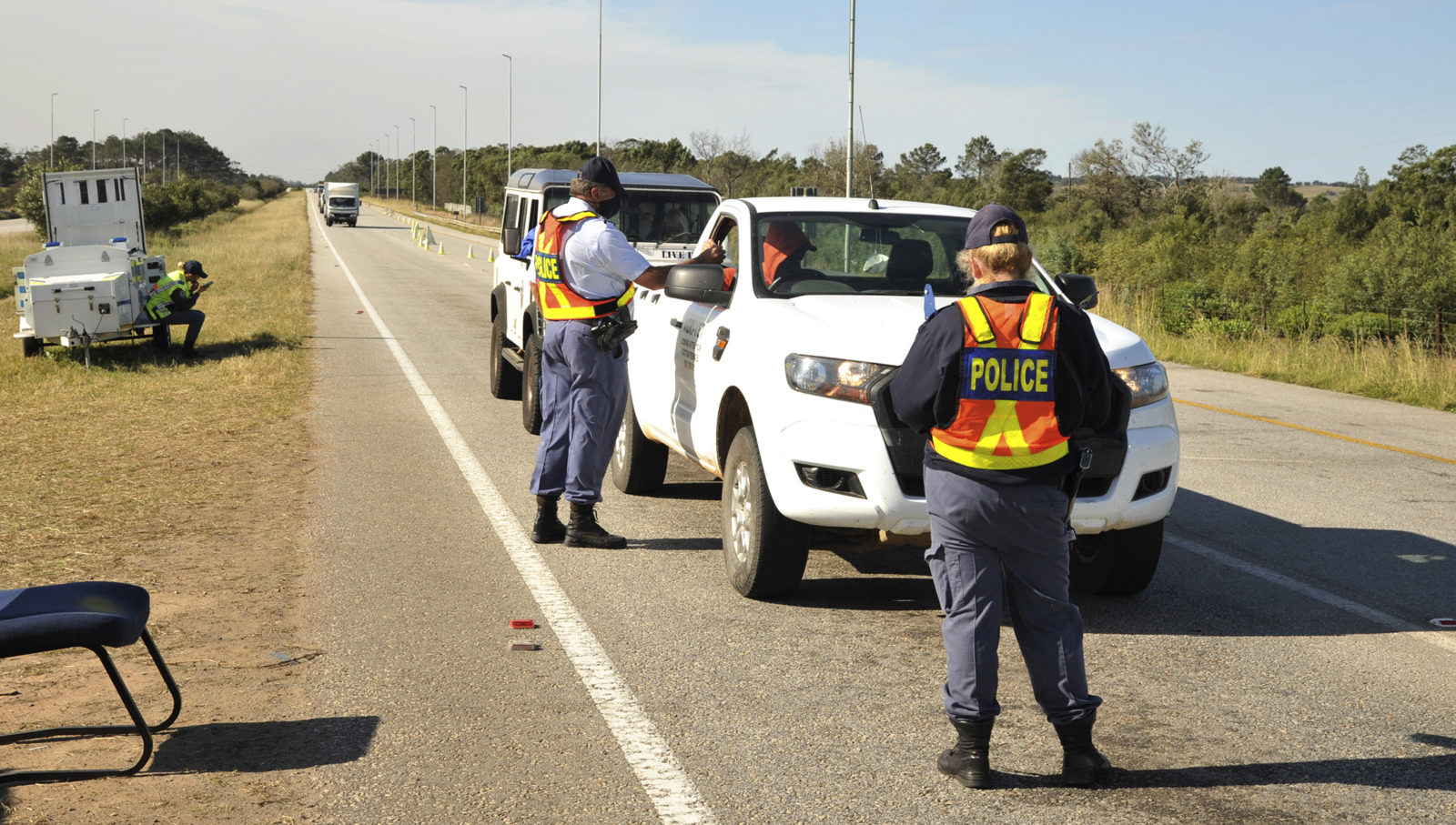 Movement restrictions and an increased police presence during the lockdown did not prevent incidents of murder, rape, vigilante justice and corruption in the Eastern Cape.

Close to 19,000 people have been fined or appeared in court for contravening lockdown regulations in the Eastern Cape, according to the provincial Department of Safety and Liaison.

Other arrests include an alleged serial rapist, a man who poisoned his children, members of a neighbourhood watch who gunned down suspected stock thieves and a group of illegal hunters.

The police also found the bodies of two newborn babies at a waste site in Uitenhage.

A spokesperson for the Department of Safety and Liaison, Michael Msebi, said that since March 27 a total of 18,465 people had been fined after they were caught contravening lockdown regulations.

Msebi said most of the fines were issued for people travelling without valid permits, driving taxis that were more than 70% full, selling non-essential items like alcohol and cigarettes, holding sports events and holding funerals with more than 50 people.

Msebi said 221 people were not given the option of paying a fine for contravening lockdown regulations and had to appear in court.

“These are the people who might have been arrested previously and fined, but were later arrested again for similar transgressions; in other words, repeat offenders. Some were foreign nationals who were both without requisite papers and in contravention of lockdown regulations. These are the ones the law enforcement agencies opt to send to court and do not allow to pay admission of guilt fines again.”

“They also stole a fridge and a toilet seat, zinc roof sheets, safety doors, wire fences, construction tools, CCTV cameras, clothes, bedding, electrical appliances, a spade, a watering can, a wheelbarrow and a bin. Some items have been recovered from the suspects, but not everything.”

Since January 2020 more than 10 people have been gunned down in Nxotwe Administrative Area and Mbentsa. Farmers in the area say there are fears that this can trigger another incident like the one in 1996 when more than 100 people were killed in an ongoing battle between stock thieves and farmers.

“They were effecting an arrest of a person who contravened the regulations when they are alleged to have solicited a sum of R1,500 from the suspect’s boss in exchange for the release of the suspect. Reports continue to suggest that on arrival at the Community Service Centre these police officers released the suspect without charging him for the offence he had committed.”

In East London, a group of eight men — including three police constables in uniform — who robbed a business were arrested.

Kinana said according to a preliminary investigation, four constables had visited a business in Fleet Street on 28 April following “a fabricated allegation of sale of alcohol”.

They then allegedly extorted a large sum of money from the business owner.

Other arrests include a 42-year-old man from Renny Locality who allegedly poisoned his three sons between the ages of four and eight.

The children were left in the care of a neighbour as their mother had left for Cape Town. Their father arrived at the house and allegedly gave them poisoned chocolates. All three children were rushed to hospital after eating the sweets. One died on the way to the hospital. Another died in hospital. The man’s third son is still in hospital in a serious condition.

Kinana said the parents “were not on good terms” but they were still investigating what led to the poisoning of the children.

He added that the Queenstown Family Violence, Child Protection and Sexual Offences Unit, members of crime intelligence, the police’s dog unit and members of the flying squad assisted by a private security firm arrested a “social media rapist” last week.

“This 32-year-old man is suspected of being behind a series of rapes that were committed after unsuspecting victims were lured through social media under the promise of work as a model,” he said.

Kinana said the man was arrested after a 17-year-old was raped in Queenstown. She told the police that she saw an advertisement on Facebook about photoshoots for young girls who wanted to work as models.

“The victim was given a date, 18 May 2020 at 14h00, as the time for her photoshoot. She attended the photoshoot alone with the suspect after other models left,” he said, adding that the man then raped her.

“Through further investigation, police picked up that the suspect had several Facebook accounts and was a regular traveller who had reached many destinations all over South Africa.

“In all these different towns the suspect was advertising to attract young girls to pitch up for the photo sessions. It is believed this is how he lured the unsuspecting victims, chose his targets and raped them.”

He said that after the police identified the man they accessed his police profile and discovered he had several rape cases against him.

When they arrested him he had a false doctor’s note that allowed him to travel during lockdown.

One of the local farmers, Mabhiza Mfamela, 54, who runs a livestock farm in Mahlubini village, said stock thieves attack in broad daylight with rifles and take what they want.

In Qumbu, 13 community members of Mbentsa village were arrested for killing four young men. Their bodies were found in an open field on Wednesday 20 May.

The four were allegedly shot and killed by members of a neighbourhood stock theft patrol.

Five of the 13 suspects are due in court on Tuesday 26 May.

Kinana said the remaining eight suspects were still being investigated.

Members of the Mbentsa community attending court said they would pay bail for the men.

Though the motive behind the killing is yet to be confirmed, it’s public knowledge that it’s related to ongoing stock theft in Qumbu.

Since January 2020 more than 10 people have been gunned down in Nxotwe Administrative Area and Mbentsa. Farmers in the area say there are fears that this can trigger another incident like the one in 1996 when more than 100 people were killed in an ongoing battle between stock thieves and farmers.

One of the local farmers, Mabhiza Mfamela, 54, who runs a livestock farm in Mahlubini village, said stock thieves attack in broad daylight with rifles and take what they want.

Several suspects were also arrested for domestic violence and the murder of elderly people during lockdown.

Captain Dineo Koena said a 60-year-old woman, her two sons, aged 17 and 30 and her 25-year-old daughter were arrested by Ngqeleni detectives for beating her 65-year-old husband and their father to death during a disagreement on 20 May.

“It is alleged that the family had a quarrel with the deceased and allegedly took turns in assaulting him at their homestead where he later succumbed to his injuries.”

Colonel Priscilla Naidu said a 29-year-old man was arrested in Port Elizabeth for the murder of Maria Snyman, 83, who died after he allegedly assaulted her during a house robbery.

An 89-year-old woman was stabbed to death in an old age home in Queenstown, according to Kinana, and 78-year-old Patricia Orpen was killed in Cradock.

A woman was arrested for abandoning her newborn baby and the police opened an inquest docket after another newborn’s body was found at a dump in Uitenhage.

Captain Lariane Jonker said 16 suspects were arrested for illegally hunting springbok on the farm Gruisheuwel in the Hofmeyr district. They were due in court on Tuesday 26 May.

“An official from the Department of Environmental Affairs, Queenstown, affected the arrests when 12 carcasses were found in the suspects’ possession. The animals were hunted with dogs and knives which were also confiscated. The 32 dogs were taken to the SPCA in Queenstown.” DM/MC