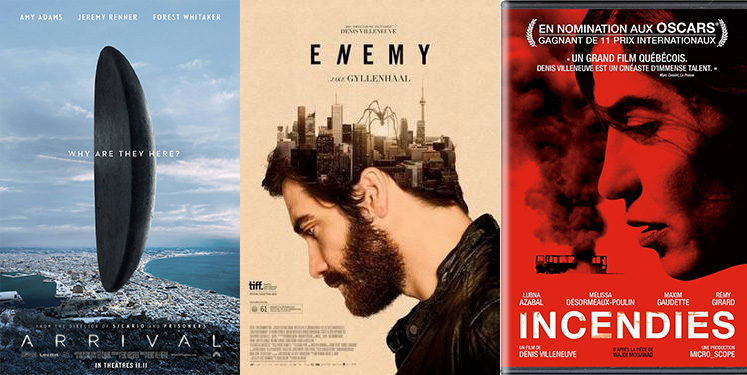 French-Canadian film director Denis Villeneuve’s most successful films are Blade Runner 2049 and Arrival. But the one film that gets stuck in your mind? Enemy.

In Enemy, Jake Gyllenhaal plays two men that look alike, and the film can appear, at times, indecipherable.

I watched Enemy three or four more times that year, and then looked for films like it. In Michael and Peter Spierig’s Predestination and Christopher Nolan’s 2014 film,  Interstellar, I found similar plot-complexity (both bend time), but by their credit scenes the drama had been resolved. I watched other Jake Gyllenhaal movies (he is similarly disquieting in Nightcrawler) but nothing scratched my Enemy-itch. As I searched, Enemy began to make sense in an abstract way: you can do anything in film, bar the budget; film is about what’s there, not what we expect to be there.

In an interview with the UK-based chain cinema Curzon, Villeneuve reveals what Enemy is about. It’s a story “of a married man, he’s having an affair, and he’s going back to his woman, and we see that from the subconscious point of view”. His description makes the film hollow; and this is, in part, Villeneuve’s virtue. The director understands how unsatisfying an answer can be and his films are therefore about questions.

Villeneuve is himself an enigma: His career began with a small contribution to Cosmos (1996), an anthology-film made by emerging directors. It features six short sequences linked by a common character, Cosmos (Igor Ovadis, a Montreal taxi driver.  Then came August 32nd on Earth (1998), and Maelstrom (2000), the latter a box office disaster. Villeneuve then took a nearly decade long hiatus, returning only in 2008 with a short film, Next Floor, which allowed him to fund the controversial, but critically acclaimed, Polytechnique, based on the 1989 Montreal Massacre, a school shooting that happened in the École Polytechnique.

Unlike with fellow filmmakers Wes Anderson or Quentin Tarantino, who both have defined voices and filming styles, watching a Villeneuve movie is never obvious. Nevertheless, there is a troubled quality to his films, their settings are often hostile.

Prisoners is set in Pittsburgh, an industrial town made more ominous by the movie’s child kidnapping plot. Sicario, which means hitman in Spanish, takes place in Juarez, a city run by cartels. Blade Runner 2049 is set in a dystopian world, Incendies in a civil war, Arrival follows alien first-contact and in some remote-turned-military base area, and in Polytechnique, the audience is locked in with a school shooter.

To varying extents Villeneuve’s films are mainly suspense-thrillers, but the threat in his films is not so much physical as psychological and his characters have more than their lives at stake. In Prisoners, Keller Dover, played by Hugh Jackman, must deal with the kidnapping of his daughter, leaving the viewer to feel the weight of her absence, her slimming chance of survival, and the extreme lengths he goes to recover her.

In Incendies, the camera follows the main character (Mélissa Désormeaux-Poulin) as she comes to know the atrocities inflicted upon her mother during a war. Though there is no disregarding the brutal elements in the way Villeneuve approaches suspense, he treats violence dispassionately. “I try to show it as ugly as possible, as brutal as possible, without showing the spectacular effect of it”, he once said.

Villeneuve’s characters, their contrasted and layered personalities, also outline the appeal of his films. Kate Macer (Emily Blunt in Sicario), is an FBI agent and a straight shooter who feels that enforcing the law is synonymous with maintaining peace. But her idealism proves misplaced when her government assigns her to an extrajudicial hit squad. More troubling still, she has greater success tackling criminality outside the law than she did acting within it.

Keller Dover (Prisoners) is a similarly contrasted man. As a father, it is his duty to protect his daughter, and with her gone, he has failed —  at least that’s how he sees it. Keller’s response to her kidnapping (he tortures police suspects to illicit her whereabouts) is somehow both extreme and understandable. He is defined by his commitment to his family, yet this very human trait is the same thing that makes him cross every ethical boundary.

Villeneuve creates such dilemmas by breaking the cinematic-contract — that is, what you see must be true. The camera rarely strays beyond the characters we’re watching and so we share their reality, unaware that, like them, we have not grasped the extent of their role in the story. In an interview with the Montreal Gazette. Villeneuve explains that he wanted Enemy to be a film which “plays with the audience”. This playfulness, more like weaponized mystery, had certain stylistic cues which recur in his later films, like camera cutaways. Some of these shots are benign, setting up a scene; others however, are deceptively symbolic. A wooden horse in Blade Runner, a peanut packet in Sicario, an RV in Prisoners — within the director’s tight framing, these otherwise inanimate objects define a character, or influence the plot, only, the audience can never be sure of their true significance.

Villeneuve is also pedantic about extensive planning, which, he says, then allows to “keep a space on set for the actors to bring something that wasn’t planned”.  Storyboarding, where a director and concept artist draw the movie before it’s shot, gives him this flexibility, and he spends much of pre-production dreaming up his film’s conceptual framework.

Arrival was more difficult, as he explained in an interview with DP/30, because Sci-Fi’s themes had become overdone. The movie follows Dr Louise Banks, played by Amy Adams, a linguist recruited by the army to communicate with aliens, and her story was conceived as dirty sci-fi, as if things were happening “on a bad Tuesday morning”. This idea opened the door for more grounded thinking. Rather than look at first-contact from a species-survival perspective, Arrival is about a mother, an academic, and the difficulty she faces in communicating with the heptapods (the aliens), underpinned by the army’s own inability to understand her.

Villeneuve pursues this everyday-authenticity in his sets. To avoid using green-screens, which he detests, he emphasises real props. A challenging decision for the futuristic set of Blade Runner 2049 for which they decided events would take place after an EMP-style blackout – which wipes out all electronics. Agent K (Ryan Gosling) uses analogue equipment; his gun fires bullets not lasers. In a similar vein, the hazmat suits and military equipment in Arrival are all of standard use today. The director has a background in documentary-making, which might explain why he prefers neutral sets. Arrival’s alien shuttle, which looks like a concave elliptical pebble, was inspired by an asteroid in the solar system.

Now, Villeneuve’s latest film is Dune, based on the Sci-Fi novel of the same name. Dune’s plot is being kept under wraps, even though its filming was completed in July 2019, and is expected to open in theatres in December this year – provided theatres do, indeed, open. DM/ ML