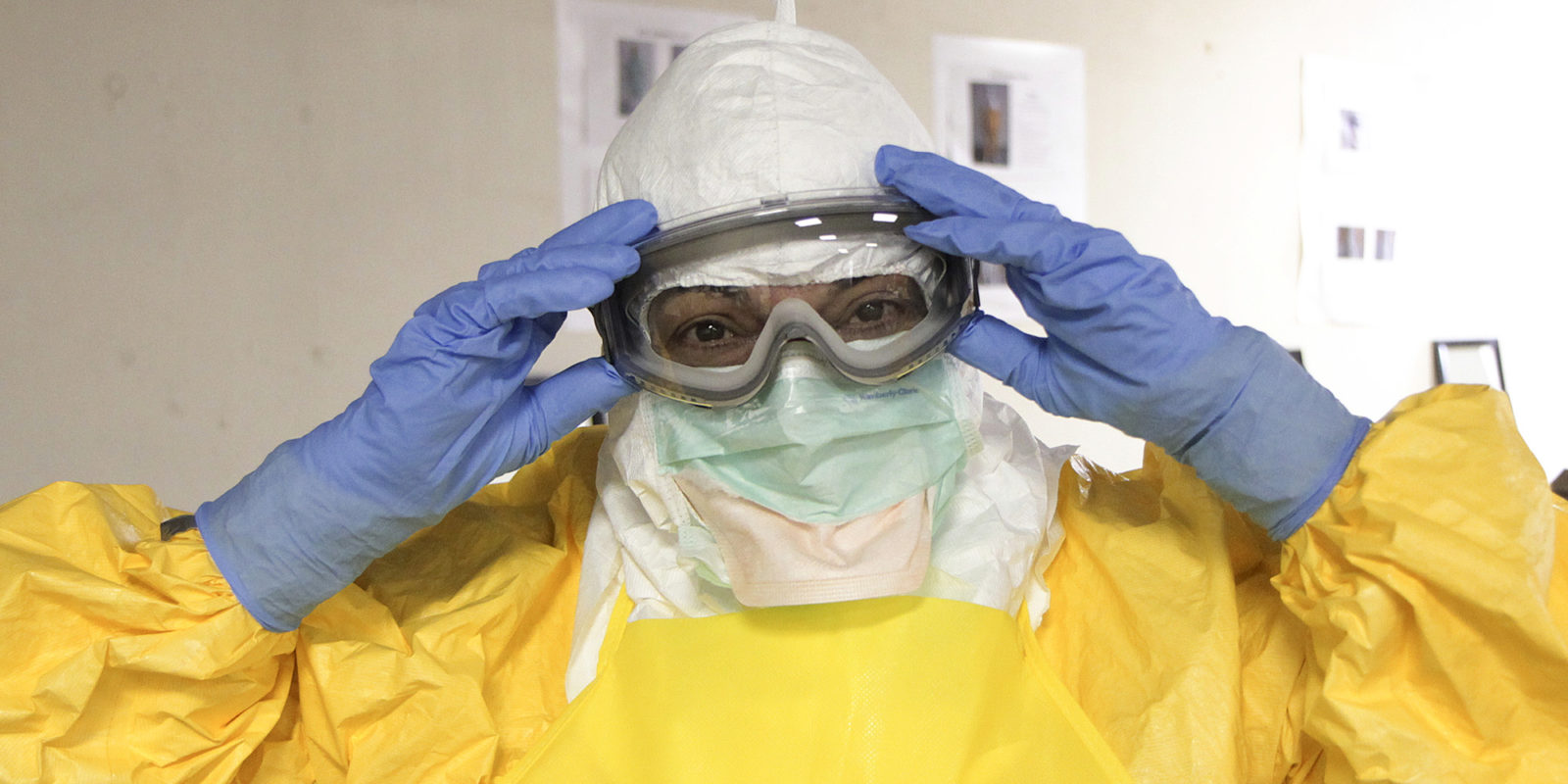 Health and emergency workers are on the front line of the Covid-19 war, but there have been reports that many go into battle with inadequate personal protective equipment. Nationally, hundreds have been infected. We investigated the situation on the ground in Ekurhuleni.

While South Africa braces itself for a Covid-19 infection peak, emergency workers and primary health care nurses are calling for the City of Ekurhuleni urgently to provide adequate personal protective equipment (PPE) amid fears of contracting and transmitting the virus.

Government ambulance services and clinics are the first points of call for medical attention for residents in informal settlements and townships, but an amaBhungane investigation suggests many healthcare workers in Ekurhuleni do not have adequate PPE and even lack basic equipment to perform their duties.

The call for the provision of PPE comes as Health Minister Dr Zweli Mkhize earlier this month confirmed that at that stage 511 healthcare workers across the country had tested positive for the Covid-19 virus.

This number appears to have grown as the media over the past two weeks reported several incidents where hospitals and clinics had to shut down after nurses tested positive.

Four townships in Ekurhuleni are emerging as hotspots for Covid-19 infection according to a presentation by Gauteng Premier David Makhura on 14 May.

The presentation showed the infection rate was steadily increasing in Kathorus, KwaThema, Tembisa and Ivory Park.

“It is unacceptable that some frontline workers have still not been provided with PPE during the national lockdown.

“Essential services cannot be provided to middle-class citizens at the expense and safety of workers.”

However, sources within the emergency services called for Masina to “look in his backyard”. The sources, who did not want to be named for fear of victimisation, said complaints relating to equipment shortages had been raised even before the Covid-19 outbreak.

Ekurhuleni spokesperson Themba Gadebe told amaBhungane the necessary PPE had been provided for all the personnel and vehicles as per operational requirements.

The municipality provides ambulances services on behalf of the Gauteng Department of Health on an agency basis and is required to supply PPE and other tools of the trade.

Gadebe even forwarded a video, which is also circulating on WhatsApp showing two types of PPE provided to paramedics.

However, a paramedic amaBhungane interviewed said this video was misleading and did not reflect the situation on the ground.

“This is a show-off for the media… In Ekurhuleni you sign for everything that is issued to you. I did not sign for any PPE uniform except for the one mask and pair of gloves to use for my four-day shift … so they must tell us who did they give it to, it is not us, not even at station level,” he said.

“From that demonstration on the video, we don’t have goggles and we certainly don’t wear double gloves, [and] there are limited aprons. We were never given a demonstration on the PPE suit. Most of the stations were given a maximum of three and they were all in one size,” said another paramedic.

AmaBhungane has also seen a group chat where paramedics from various stations stated that the PPE shown on the video had not been given to them.

One message read, “We had one thermometer and nayo [it is also] malfunctioning so we took it back and now we have 0.”

“I only have one and it doesn’t have batteries,” read another message. 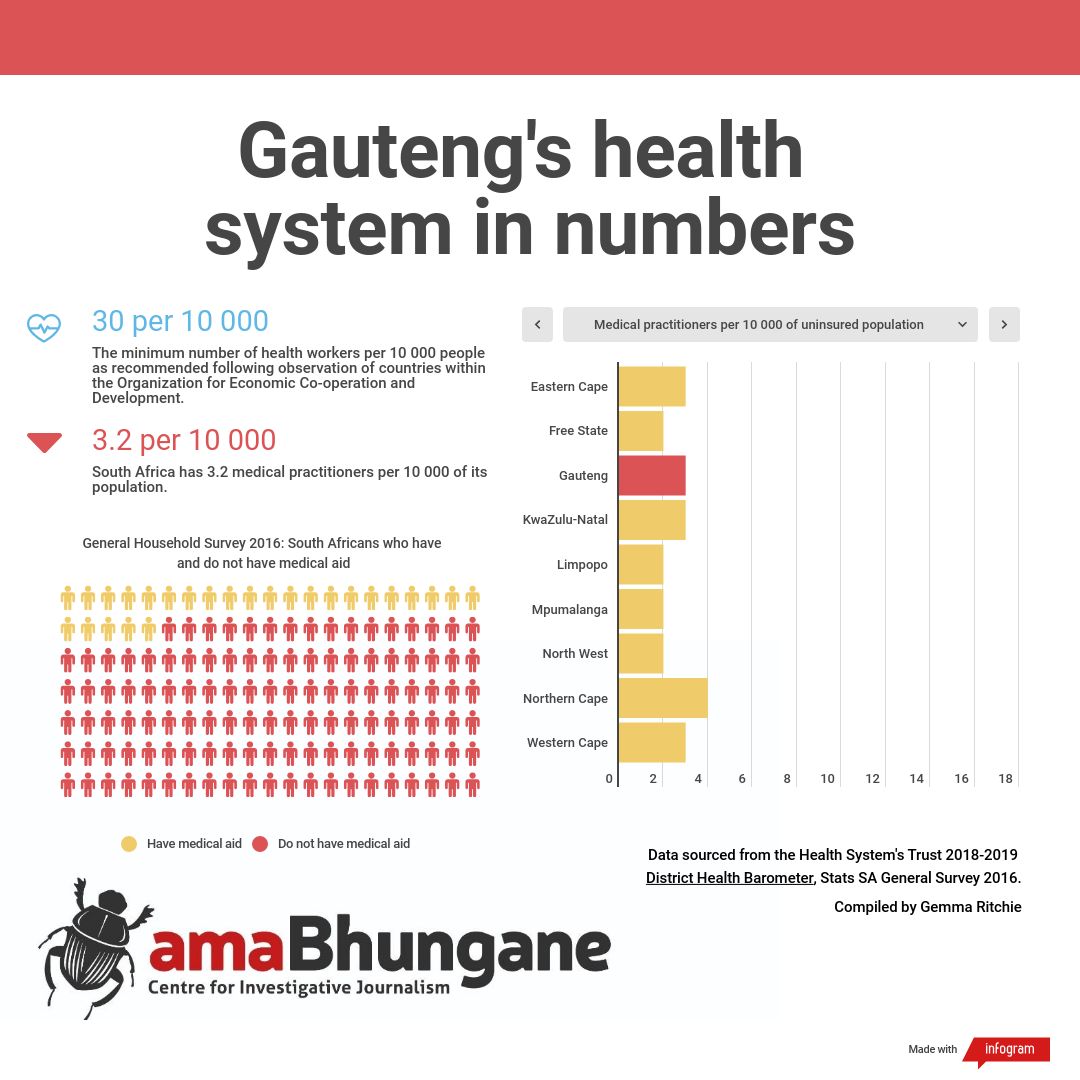 The shortage of PPE for healthcare workers was also raised by public-sector unions.

The National Education, Health and Allied Workers’ Union and the Democratic Nursing Organisation of South Africa sounded the alarm early in April, saying frontline workers, especially in clinics and rural areas, were complaining about having little or no protective gear.

‘Ambulances are taxis and virus incubators’

The national coordinator for the Democratic Municipal and Allied Workers Union of South Africa, Stephen Faulkner, told amaBhungane their members had repeatedly requested PPE and other equipment, but have been told to take the risks or go home.

“As one of our shop stewards noted, they are turning our ambulances into taxis and virus incubators and we are not able to do the vital checks that can save lives,” Faulkner said.

The equipment is now vital for Covid-19 screening and monitoring, especially the thermometers.

To make matters even worse, ambulances were not being decontaminated after carrying those infected with the virus and there was also no clarity regarding procedures for disposing of what little PPE is being supplied, Faulkner said.

According to the first paramedic, each of the 29 fire and ambulance departments in Ekurhuleni was issued with one box of N95 masks per week.

Emergency service workers were working a four-shift system and each shift had about eight to 10 members, said the paramedic. Fire and ambulance crews work interchangeably.

“The challenge is that each of the four shifts has to share 10 masks from that one box supplied meaning that if you are running with three ambulances automatically the 10 masks provided… are finished on the first day of the four-cycle shift that one will be working; the next day you are exposed,” he paramedic said.

AmaBhungane has been given recorded telephone conversations between an emergency worker who is complaining about having no equipment and a supervisor who told him to just observe the patient at the scene and make an assessment.

The worker then informs the supervisor that it was unethical not to check the vital signs of a patient. The supervisor responds that there is nothing she can do about the situation.

Some paramedics have resorted to buying their own equipment and asked the municipality to buy batteries. “Management keeps telling us they have ordered them, there is a delay, but it’s been months,” the first paramedic said, adding that the shortage of equipment was an issue before Covid-19.

Meanwhile, a recent post on Facebook by a public hospital nurse highlighted the frustration of health workers.

She wrote: “Nurses are the new Covid-19 transmitters because they don’t have proper PPE, they contract the virus, get into a taxi with other community members, go to the mall, then go home… This is a mere example of how Covid-19 will continue to spread.”

The nurse, who removed the post and asked not to be identified when amaBhungane approached her, also wrote that she was disgruntled with President Cyril Ramaphosa.

“I have a question for you Sir, how do you expect front liners to go to war without proper weapons to fight the war? Mr President where is the PPE y’all are talking about on TV? Is the PPE waiting for the Cuban Doctors Mr President? We wear one mask a week,” she stated.

Three days later the nurse posted an update that the healthcare workers had received PPE from the department.

A nurse at a local clinic who says she sees between 20 and 50 patients a day, mostly for chronic check-ups and medication, also complained to amaBhungane that staff had to use one mask for the whole week.

The nurse said she had raised the issue several times especially since the number of infections is increasing. “We are told there is a shortage, we must be patient,” said the nurse.

She said even though people were required to wear masks it was no guarantee of safety.

“I need to touch people, take their pressure and other vital signs, so if the first patient is asymptomatic, this means whoever I come into contact with is at risk.

“Bear in mind that the community comes to us first and if we cannot treat that patient we refer to the hospital. Most public doctors require… a referral note. We are in the frontline,” she said. 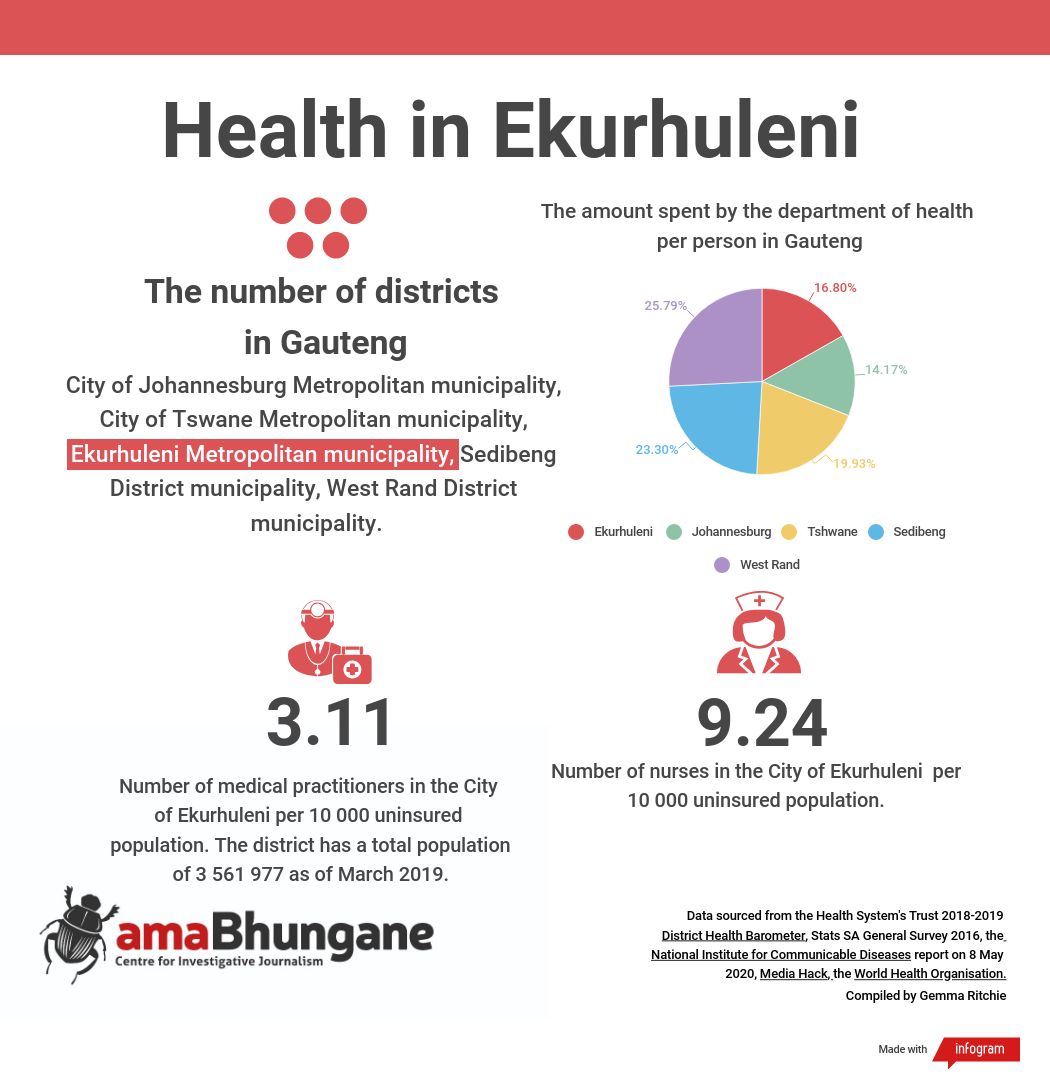 Gadebe denied in a statement that there was any truth to these “malicious claims”, saying that disposable masks and gloves were supplied to nurses even before the Covid-19 crisis and would continue to be supplied to them.

“Any… health facility with a shortage knows how to elevate such to management for immediate intervention,” he said.

There is enough PPE

According to Makhura’s 14 May presentation the province had adequate PPE in stock based on the current patient load.

“However, we continue to order more stock for the next phases of the pandemic. We still want to emphasise that surgical and N95 masks must be reserved for use only by frontline healthcare workers,” the premier said.

Gadebe said ambulances were issued with medical PPE and in response to the pandemic the allocation had been lifted to match the risk.

“For the period of the past 30 days alone, at least 5,000 medical masks have been issued to Ekurhuleni medics. Over and above that, 3,500 aprons, thermometers (for every fire/ambulance station), sanitisers, soaps, biocides sachets, and face shields have been issued for all frontline staff.”

Gadebe said that level B (high risk) suits were also in place for personnel dealing with confirmed cases, and said consumable items such as batteries were replaced as and when required.

“In the case of the Covid-19 pandemic, the frontline workers dealing with patients directly have undergone training on donning and doffing of the PPE.”

He also added that whenever there was a suspected case, decontamination was done immediately after the patient was delivered at the medical facility.

“Fact of the matter is that proper control measures to ensure the availability of these consumable items are in place. Sanitising chemicals are also issued, regularly. Ambulances are cleaned and sanitised after each response/call out. This is a standard operating procedure. Ambulances have a checklist and daily, ambulances are checked in accordance herewith,” Gadebe said. 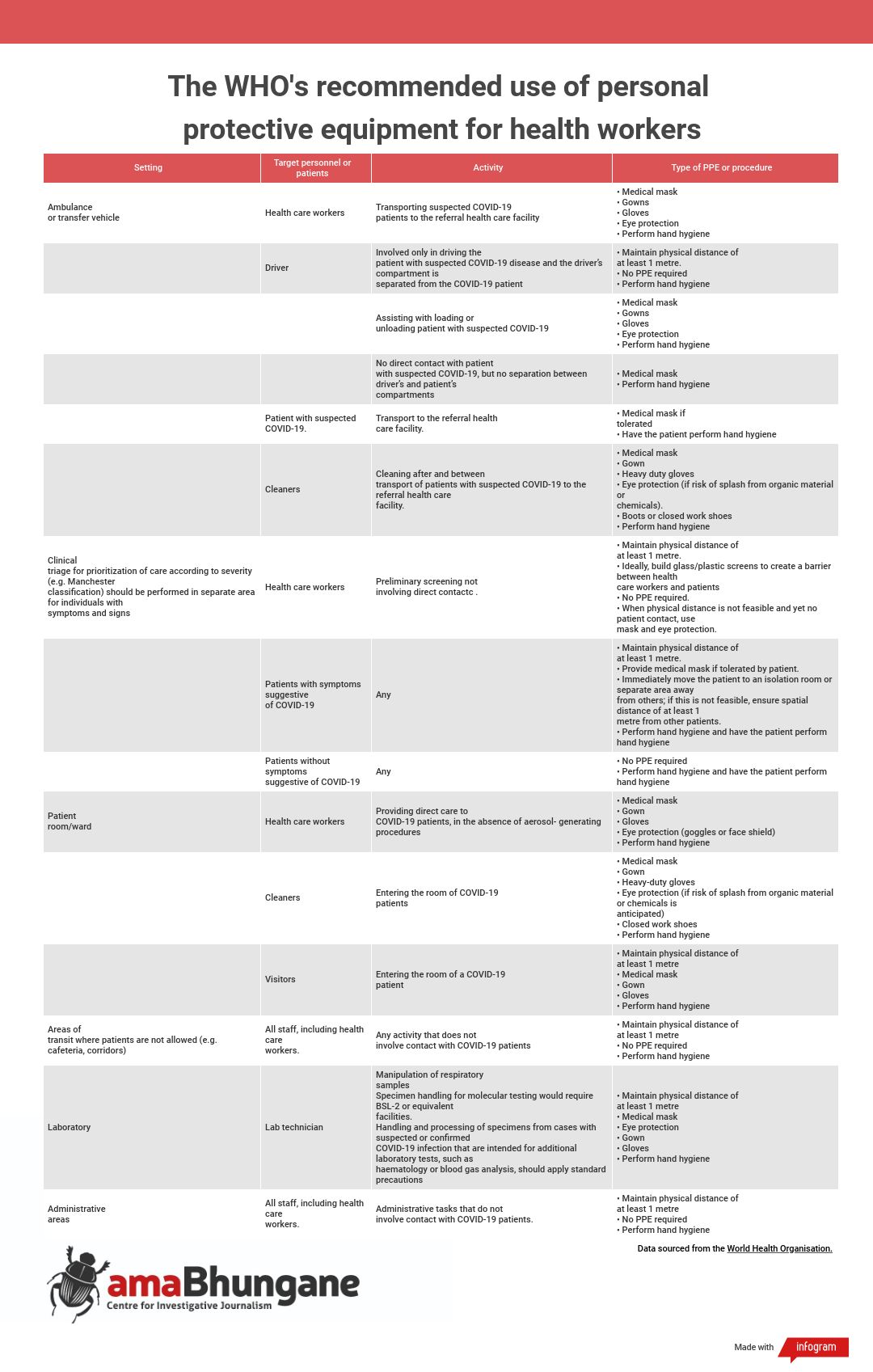 One of the paramedics countered: “If all was well, then why the workers wrote memorandums requesting equipment and why the labour unions were called to intervene?”

He also called for transparency in terms of the supply of equipment and PPE. “The municipality must tell us where are the adverts for these tenders, who are the suppliers. Where is the equipment.”

Faulkner called on authorities in Ekurhuleni to “get their heads out of the sand, and wake up to the crisis that is unfolding around them”.

“For all of our sakes, they must immediately take steps to protect their most valuable asset, the workers attempting to deliver services to our communities. Failure to do so will not be forgotten as preventable infections and loss of life escalate. Act now to save lives.” DM