Order up a gourmet kit and DIY 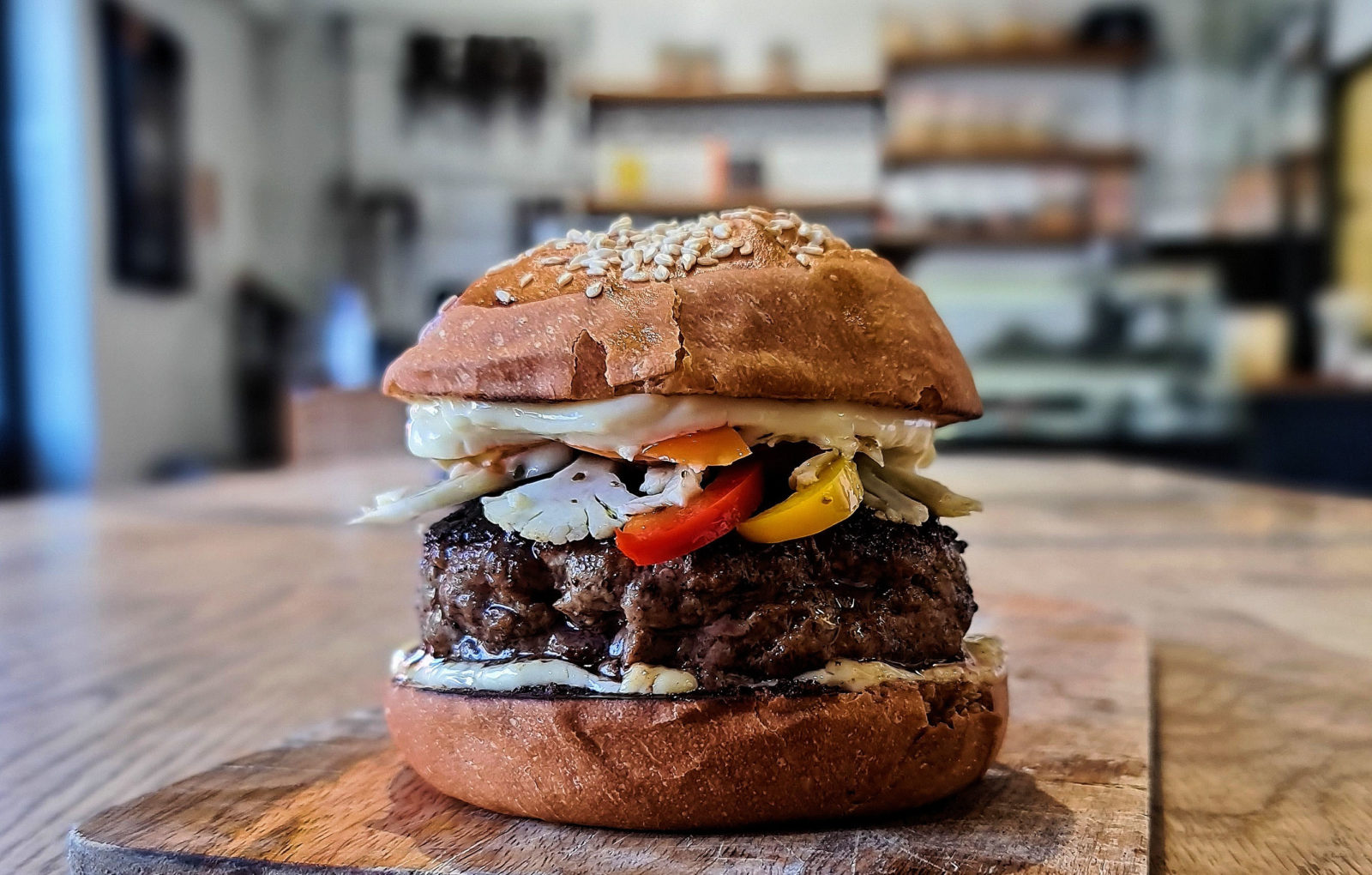 Banana bread is out, sourdough is on the wane, home deliveries of ready-made meals for freezer or oven are back on the table, and pizzas and burgers can be brought to your door in kit form for quick crowd-pleasing (if the crowd is your family in your own house) meals.

When Jules (baddest mofo of them all, Samuel L. Jackson) sinks his teeth into the Big Kahuna burger in Pulp Fiction, and declares it to be a tasty burger, you can believe him, despite its fairly unremarkable appearance – a typical American beef burger with cheese, lettuce, and tomato on a bun.

But logic (mine anyway) dictates that since “kahuna” is a Hawaiian word (looking up a definition of “big kahuna” on Urban Dictionary and just plain old dictionary.com will give you very different results so be warned; I did this so you don’t have to), it should include a pineapple ring. Not fresh pineapple, but one of those overly sweet things you get in tins. Slap it on with a bit of mature Cheddar and happy days.

The pizza world is radically and vehemently divided on the pineapple issue. I am sorry for those who are against it; their palates are sadly not evolved enough to appreciate the mouthwatering deliciousness that is any combination of sweet and savoury. Shame.

But we’re not looking at pizzas today, as much as we are at burgers; specifically, burgers you can make yourself. In the old days, we would either order one already assembled, or get a takeaway, or we would go off to the supermarket and get all the ingredients for “burger night” at home. Sure, you can still do at least two of those three things (at the time of writing, who knows what new regulations will arise in the next five minutes). You can also get burger kits – delivered – which contain all the fixings. All that’s left for you to do is cook the patties and toast the buns, before assembling.

“Pfft,” I can hear you saying, “why should I do that when I can go to Pick n Pay and get what I need?” By all means, do that. I did too. But there are a few good reasons to get your paws on a kit, especially one from Frankie Fenner Meat Merchants.

The burger box concept is an extension of what FFMM had been doing at the butchery for ages, where they cooked the burgers on Big Green Eggs and served them to their customers at its Woodstock branch. They’d normally make 150 every Friday which would sell out every week. “It was a pretty cool vibe, with beer and burger fat dripping onto the coals,” said Andy Fenner nostalgically.

Every week, the box (for two) contains a new and different burger – not just the patties, but the complementary condiments that accompany them.

FFMM takes burgers pretty seriously and constantly challenges themselves every week to find a new combination of flavour and texture. “There’s a lot of skill that goes into creating a balanced end product,” said Fenner. These have included the Nose-to-tail, a grass fed patty, topped with oxtail marmalade and brined, and smoked tongue sliced wafer thin; and the XO – same patty but smothered with a funky XO sauce and kimchi.

“We also often make use of what we have excess of, from our daily butchery function. For example, we might have pastrami offcuts which we blend into a patty and add smoky mayo and jalapeño pickles,” said Fenner. “Or we might have excess bacon trim, which we grind into a patty and serve with pickles and American cheese. Sometimes we have too many herbs or spices so we make things like salsa verde and serve it on a lamb patty.”

The week I ordered, I received 200g patties (grass-fed beef blend, with hand-chopped lardo), Bagna càuda mayo, and Italian pickle (pepper, cauliflower and carrot). Where other burgers might include cheese, it was left off for this one because it would have been overwhelmingly rich. The buns are from Captain Bread, aka Jason’s Bakery.

Bagna càuda, by the way, is “a hot dish made from garlic and anchovies, originating in Piedmont, Italy during the 16th century. The dish is served and consumed in a manner similar to fondue, sometimes as an appetiser, with raw or cooked vegetables typically used to dip into it”. Hand me a spoon.

“Our standard burger blend is always the starting point. We use a holy trinity of chuck, brisket and short rib. That gives us a natural ratio of 80% meat, 20% fat which we believe to be ideal,” said Fenner. “The patty does not require any binding agent as a result, which we feel is super important.” (No breadcrumbs, egg whites etc.)

Because my curves refuse to be flattened (and I wonder why), FFMM also sent me its “traditional” box, with those standard 200g grass fed beef patties, BBQ mayo (could also be eaten with a spoon), pickles and cheese.

“The cheeseburger was just an example of what a ‘standard’ FFMM patty would taste like. As mentioned, we do a new one every week but people can always just order our house blend burger patty and source their own toppings,” said Fenner.

“We launched a nice initiative this week,” he continued. “We have decided to try to lend a hand to colleagues in the industry, who have been suffering with closed restaurants. The idea is pretty simple: we will be collaborating with various featured chefs to design the week’s burger. We are then selling our burger boxes for R200 (normally they are R150.) The revenue from the additional R50 per box goes to the restaurant that we have collaborated with for that week.”

With an average of about 150 boxes a week, and even if they only get to 120 boxes at the higher price, the profit will be R6,000. “That goes straight to the chef to help them pay their staff, or rent, or overheads. Whatever they need, really,” said Fenner.

The plan began with Melting Pot for this week ending May 22, 2020, and they’ve really pushed the boat out, said Fenner. “Teaming up with John Van Zyl, we are doing a burger inspired by curried goat. Both John and I love goat and think it’s super underrated. But we will have to see if people agree.”

The 200g patties are made up of ground goat and lamb (for the requisite fattiness), with mint and coriander dressing, tomato masala, and spicy pickled carrot. Based on Melting Pot’s Bombay Burger (which is actually vegetarian), the only difference is the patty.

“The current landscape is not very nice. I miss the old Melting Pot with queues down the stairs. We are trying to adapt as much as we can,” said Van Zyl. “We are offering a ‘Heat & Eat’ and ‘pantry essentials’ for delivery only with orders being placed online via our website. It’s not by any means profitable but it keeps us busy and I can at least use the money generated to pay my staff.”

Van Zyl reckons the burger collaboration is “a great idea because it helps raise some funds for us as a ‘restaurant’, aiding us with various expenses, and equally important I think is the exposure and reach that us the ‘restaurant’ will gain through this campaign.”

Next week, it’s Karen Dudley. “She’s a genius with vegetables and teasing flavour out of simple things so I can’t wait to design that box with her,” said Fenner. And he’s stoked that Kobus van de Merwe is on the cards for the week after. “I’m trying to get him to feature bokkoms,” said Fenner.

“Andy is a neighbour – two blocks down from The Kitchen on the Main Road (Sir Lowry Road) in Woodstock, and a good friend,” said Dudley. “We have talked and dreamed together on a few projects and Andy is, of course, well-loved and regarded in our industry. He does the (proper) meat and we (The Kitchen) do the vegetables.

“My initial thoughts are to add a fantastic crunchy Asian slaw as a foil to that legendary patty. Or to add a good chimichurri. Or perhaps a Green Goddess dressing. Or maybe a slice of Parmesan cauliflower…hmmm…”

Dudley agrees with Van Zyl that FFMM’s initiative is a great one. “I have been so heartened by the outpouring of love and support for all the restaurants and the communities around them,” she said. “Keeping funds trickling to my crew has been my major concern and Andy knows this! The proceeds will really mean a lot to my staff, who are now battling landlords and have been without work for a good while.

“But in addition to looking after our staff, I know that in a few months (a year’s?) time, when restaurants really can re-open, we will need a good solid injection of money to start business again. This is when the restaurant industry is really going to need support.”

Deliveries take place Mondays to Fridays and if you place your order before midday, you’ll get your burgers the next day. The service is personal, as in you will correspond with a human, by emailing [email protected] You’ll also get an email with all the necessary cooking instructions and tips, which I wish I’d read first because I would have done them on the braai as suggested.

For scientific comparison purposes, I ordered a burger kit from Knead as well, which has an ever-expanding online store. It sources the patties from FFMM but slightly smaller ones at 180g (which is still pretty impressive in the palm of one’s hand). The buns are kitka/challah enriched with croissant dough, and irresistibly good. Condiments include BBQ sauce, mustard mayo, pickled cucumber, cheddar cheese and caramelised balsamic onions. It too, in Jules’s words, was a tasty burger. Lovely and messy. These are burgers you need to eat with a knife and fork, unless you have the ability to unhinge your jaw.

And then my own burger, the one I call Triple Pig. I went with pork mince with thick slices of cheese inside (which somehow evaporated), and because I’d enjoyed Knead’s, a kitka roll, but a poor cousin from the supermarket. I dolloped on some mayo and ketchup, caramelised the onions in rendered bacon fat, and flash fried a few slices of prosciutto I got from Richard Bosman’s Quality Cured Meat, which brought a nice funkiness to the whole thing.

Which was the best? Hard to say. Each one had its merits, and I will go out on the ledge and say you’ll have a hard time finding a better patty than from FFMM. I’m ruined for life. Just wait until I get some of its lambchetta… DM/TGIFood