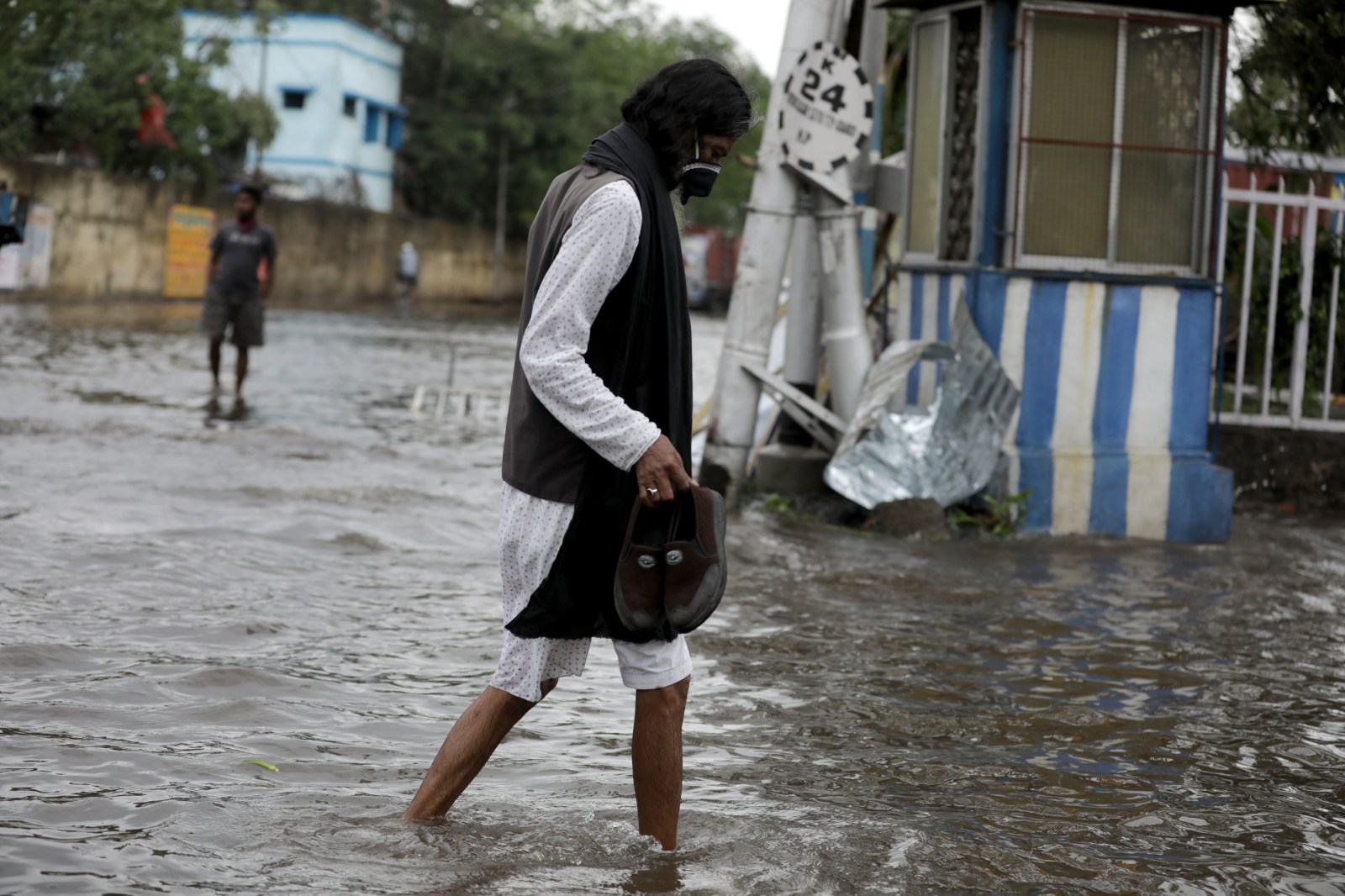 epa08435495 A man wades through logged water after cyclone Amphan made landfall, in Kolkata, Eastern India, 21 May 2020. The death toll due to devastation caused by the cyclone rose to 72 across West Bengal. EPA-EFE/PIYAL ADHIKARY

KOLKATA/DHAKA May 22 (Reuters) - Peering down from his aircraft, Prime Minister Narendra Modi saw on Friday the devastation and flooding caused by the most powerful cyclone to strike India and Bangladesh in more than a decade, before landing in the stricken city of Kolkata.

At least 96 people died in the two countries when cyclone Amphan swept in from the Bay of Bengal on Wednesday most of them in the eastern Indian state of West Bengal.

The toll is expected to rise as communications are restored and authorities reach villages cut off by blocked and submerged roads, but the evacuation of some three million people before the cyclone struck undoubtedly reduced the number of deaths.

Modi has promised to leave no stone unturned to get West Bengal back on its feet, as the state counts the cost of rebuilding infrastructure and homes, and supporting farmers whose crops and livestock were destroyed by Amphan.

Wearing a face mask as he stepped onto tarmac at the airport in Kolkata, Modi was greeted by the state’s Chief Minister Mamata Banerjee and other officials, all wearing masks.

Kolkata’s deputy mayor Atin Ghosh told Reuters “the city is still in a state of shock.”

“Municipal teams, civil defence personnel, police personnel have been working overtime to restore road connectivity first. But there is an acute shortage of manpower due to coronavirus related restrictions,” Ghosh said.

“Private buses and trains are still not in service. We really need citizens of Kolkata to come forward and lend a helping hand in whatever way possible.”

On Friday, police were using drones to assess the damage in Kolkata, a city of 14 million, where an estimated 10,000 trees fell during a storm that lasted several hours.

Reuters Television footage showed some streets strewn with uprooted trees and broken branches, while torn power lines lay amid pools of stagnant water. At least a dozen people died in the city during the storm, most of them either electrocuted or crushed beneath collapsed walls.

“It is complete devastation. First it was COVID-19 that drained our resources and now this,” Banerjee told a news conference late on Thursday.

“One has to see to believe the magnitude of devastation in North and South Parganas, Sundarbans and in Kolkata.

“Most of the affected parts are still not accessible by road or through communication channels. It will take several days before we get on the ground reports from interior areas.”

Amphan unleashed torrential rains and a storm surge in the low-lying coastal areas that burst river embankments protecting villages in the delta. Its winds, gusting up to 185 km per hour (115 mph), wrecked their mud walled houses and tore off roofs.

Amphan originally started as a super cyclone with wind speeds reaching over 230 km per hour, the equivalent of a category 5 hurricane, but it weakened after making landfall into a very severe cyclone as it moved inland through Bangladesh.

Initial estimates from the Bangladesh government put the damage to infrastructure, housing, fisheries and livestock, water resources and agriculture at around 11 billion taka ($130 million).

“Some 1,100 kilometres of road, 200 bridges and 150 kilometres of dams in coastal districts have been damaged,” said Enamur Rahman, Junior minister for disaster management and relief.

Crops have been damaged over an area of 176,000 hectares, Agriculture Minister Abdur Razzaque said. And the country’s electricity authority was scrambling to restore power for some 10 million people.

“It has left a trail of destruction in its wake, said Rahman.