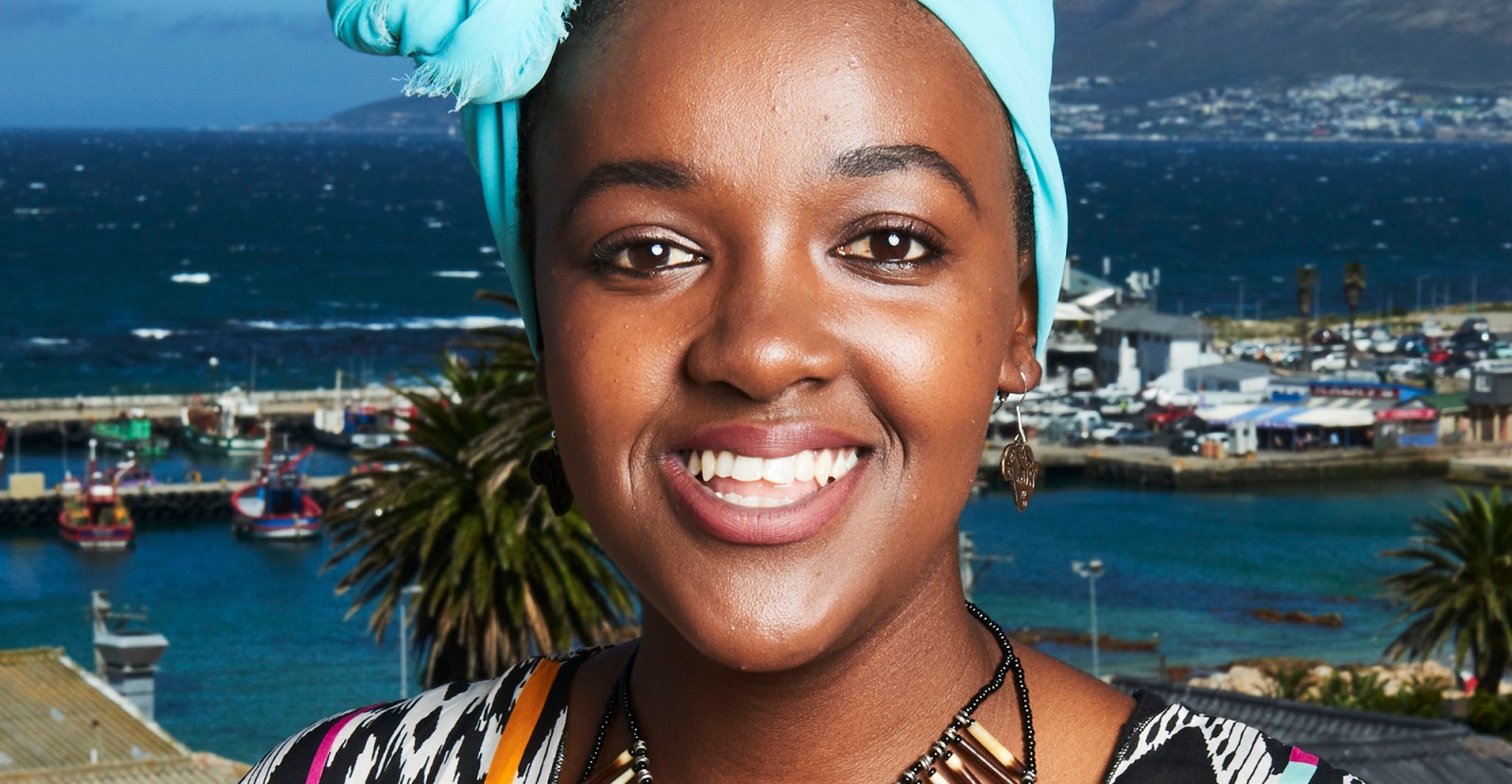 At 29 years old, Aviwe Funani is determined to be visible, to be a role model to young black women in South Africa.

“I am a shocker. I like to create controversy. It’s my trademark.” These words by late pop star Brenda Fassie are one of Aviwe Funani’s treasured quotes. “I wonder where we would have been as African women had people like Brenda Fassie not said yes to the call of controversy,” says Funani. “The call to be different, the call not to fit in and to appease the world.”

Her tactics are perhaps more subtle than those of Fassie.

Maverick Citizen first met Funani in February at the British High Commission’s pre-SONA (State of the Nation) cocktail party in Bishopscourt. At the bash, Funani sipped Appletiser while speaking with former Cape Town mayor Patricia de Lille (who would be named Minister of Public Works and Infrastructure the next day). She does not drink alcohol.

Funani is friendly, soft-spoken and charming. She attended the commission’s function in her capacity as programme monitoring manager at Waves for Change, a not for profit organisation headquartered in Muizenberg.

This week, during a Zoom interview from her home in Plumstead, Funani’s words are rapid as she gives voice to her passions.

“I remember in around 2016, I was telling a male friend: ‘I’m looking for black female role models, and I want to be one of them.’ At the time my friend said: ‘Impossible. You won’t find that, especially not in Cape Town.’ I was so shocked. In my mind, I was like: ‘No way! I’m going to work my butt off pursuing this.’

“And I’ve found that the more I’ve worked towards this goal, the more I meet amazing black women who are changing the status quo and who are challenging the norms of what it means to be black and a woman. People who are driven and living with a sense of purpose and wanting to influence their communities positively, while also building wealth and economic development. I mean, in a sense it’s also about simply developing yourself, whether that’s investing or just educating yourself, or coming out of debt.”

Born in Maclear, a small town 170km north of East London, to arts teacher Linda and nurse Mawabo, Funani was raised in a home scented with newspaper ink.

“My dad bought the Daily Dispatch, every day,” she recalls. “I remember him coming back with his newspaper, sitting at the dining room table, and myself and my two brothers sitting around him, passing pieces of the paper around. We watched a lot of news, current affairs.

“My mom read a lot of empowerment books, a lot of spiritual books, a lot of books that spoke to the feminine heart and how, as a woman, to be strong and confident. My gran was an English teacher, when she was still working. So, when we went to her house, we always had a lot of books, too. For example, books by political freedom fighters from around the world, like Marcus Garvey. A lot of books around Nelson Mandela.

On Wednesday May 27, Funani will join a Zoom panel discussion to mark the official launch of the World Economic Forum’s Global Framework for Youth Mental Health.

Funani points out that, like Fassie, veering off the beaten track had become a hallmark of her journey. After school, she forfeited a scholarship to study agricultural management at the Nelson Mandela University in Port Elizabeth, instead testing uncharted waters by moving to Cape Town where she completed a BCom in information systems at the University of the Western Cape.

“At the last minute, I changed my mind and I was like: ‘Okay, I’m going to Cape Town to study! And there I realised that I love information technology and information science, and that I want to understand the world as it changes and how these changes affect people. It was also about wanting to find my independence and my own voice. Cape Town really helped me do that.”

After working for two years as a project leader at a Cape Town marketing and investment company, Funani decided to ditch the corporate sector.

“This was a big and controversial decision,” she says. “But I needed to follow my dreams to work with youth and particularly women.

In 2018, Funani joined Waves for Change, founded by surfers Tim Conibear, originally from the United Kingdom, and Apish Tshetsha, from Masiphumelele near Kommetjie beach. Operating at five beach sites across South Africa, the organisation provides children and teenagers from townships with a sense of belonging through surf therapy.

“Basically, we’re trying to create positive role models, because many of these children come from extreme trauma linked to adults,” says Funani.

“When they come to the beach, it’s totally different from the environments they grew up in. They can play. They don’t have to look over their shoulders, to see if there’s a gangster or some shooting about to happen. So it’s about creating safe spaces, positive relationships, and also helping them to understand the power of communicating.”

Lockdown presented challenges at Waves for Change. However, the organisation adjusted and now reaches up to 1,000 young people via WhatsApp.

“Amazingly enough we have become very innovative,” says Funani. “Obviously we’re not physically having sessions on the beaches, but our programme now runs remotely. We’ve moved all our children on to WhatsApp groups, where we send them mental health resources twice a week, and meet and engage with them.”

“Good morning W4C family, today we are going to share the Power Hand activity with you,” reads the message. “This allows us to identify our own strengths. Our strengths is what we are good at, and what also makes us feel good about ourselves. We all naturally possess strengths. If you struggle identifying yours, please ask a trusted friend or family member to tell you what yours are.”

The message, accompanied by colourful graphics, tells a candidate to identify five strengths, one for each finger. The next message stipulates physical activities.

When not occupied with Waves for Change, Funani heads the Cape Town hub of Global Shapers, a network spearheading growth projects around the world.

“For example, one of our Cape Town initiatives was Ladies in Tech,” she says. “A group of women who met in Khayelitsha for computer lessons every day for close to a year. They graduated last year in August.”

Since lockdown started, Funani has also been hosting webinars to youthful audiences in South Africa, Nigeria, Ghana and India. Key points include mental health issues and business opportunities in a world in Covid-19 disarray.

“I was thinking, how can I still impact the world? Even though I can’t leave my house,” she says. “Mainly, how to respond positively in this time when it is easy to be negative. So I called up a friend of mine in Lagos to talk about this, and we decided to host a webinar, and that’s how it started. Eventually, we were getting other young entrepreneurs on board to talk.”

On Wednesday May 27, Funani will join a Zoom panel discussion to mark the official launch of the World Economic Forum’s Global Framework for Youth Mental Health. Funani attended a similar WEF event hosted in Geneva, in Switzerland, last year. Here, former politician Lindiwe Mazibuko delivered a speech that made a lasting impression on her.

“I had this amazing experience in Geneva last year,” says Funani. “So, one of the guest speakers was actually Lindiwe Mazibuko. Her talk, on that day, a Sunday, it really impacted the way I view myself as a woman, as a leader. One of the things she spoke about was young people running for office. She said not to be scared to enter the political arena. She made me believe I could actually influence policy; that I could actually influence how my country is governed.”

In the future, would Funani consider a career change into the political arena?

Funani adds that right now there is no time for romantic relationships. “That’s a sacrifice I’ve chosen to make at this point in my life,” she says. “I’m still young, let me rather accomplish these goals first. Plus, I’ve had guys who asked questions like: ‘Okay, why don’t you focus on me more, why do you work so much?’”

At present, her priorities seem cast in concrete.

“If I have to not eat, that’s okay,” she says. “Just giving my all, working towards changing how people see women, black women, I will do that every day for the rest of my life.”  MC