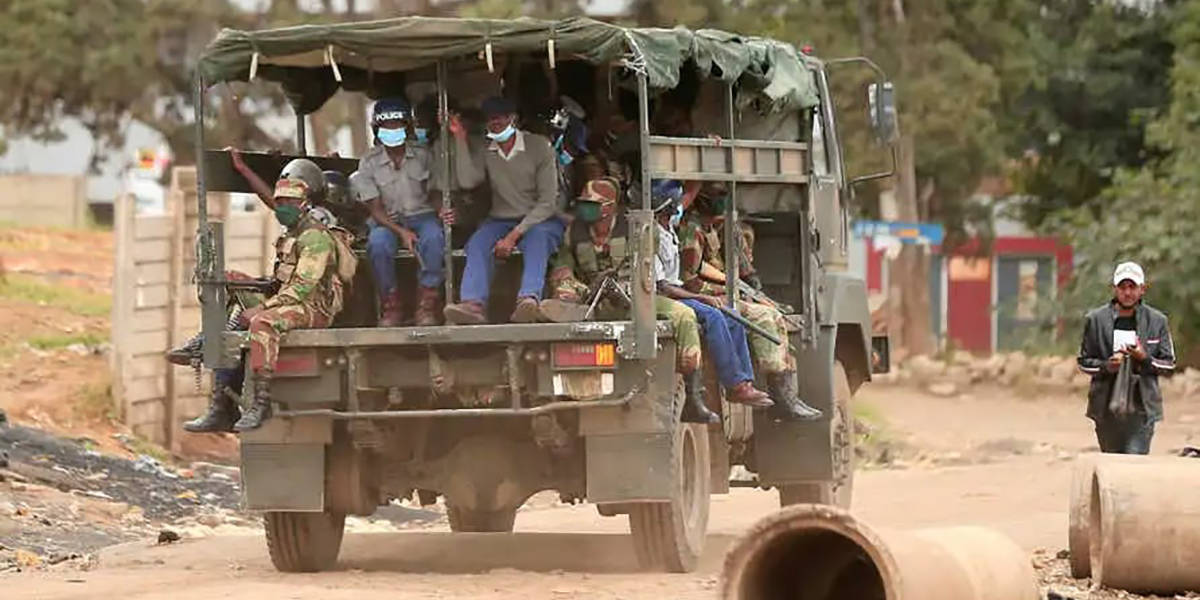 Police and soldiers patrol the streets during a nationwide lockdown to help curb the spread of Covid-19) in Harare, Zimbabwe, 19 April 2020. (Photo supplied)

In an interview for a book I am writing on Gukurahundi (the 1980s genocide in Matabeleland) I got frustrated with my key informant because whenever the time came to talk about what happened to him, he would go round and round in circles or his story would be rife with inconsistencies. By contrast, whenever he was narrating what happened to his co-victims, he would be articulate, to the point and quite detailed. I ended up having to tell him we might have to bin the project or hold it until he was ready. He looked me straight in the eye for the first time and said: ‘But Mamo, how do I tell you we were raped. That they made us lick menstrual blood off the female detainees?’

On Wednesday night (13 May 2020) I woke up to find several missed calls and messages from fellow Human Rights Defenders telling me that Zimbabwe’s youngest MP, Joanna Mamombe, 27,  and her Movement for Democratic Change (MDC) colleagues Netsai Marova, 25, and Cecilia Chimbiri, 33, were missing after a demonstration they had held earlier that day protesting lockdown-induced starvation among other things.

I was told that after the protest, they had all gone their separate ways but a while later, Joanna called a colleague and told him the three women had been stopped at a roadblock by the Zimbabwe Republic Police (ZRP), arrested and taken to Harare Central Police station. The colleague notified some lawyers who went to the station only for police to deny they had ever arrested the three.

MDC youths and their lawyers spent the whole night moving from police station to police station searching for the three young women to no avail. The Daily News ran a story by their reporter Vascoh Chaya, in which he stated that he had spoken to Police Spokesperson Assistant Commissioner Paul Nyathi who had confirmed that they had indeed arrested the protesters. The Herald, a state-run newspaper also ran a story by their reporter Victor Maphosa who also claimed to have spoken to Paul Nyathi who had confirmed that indeed the three young women had been arrested the day before.

Where then had the police taken the three?

From these denials, it quickly became clear that they were being “disappeared.” This was alarming, during Gukurahundi thousands of innocent civilians were ‘disappeared’, never to be seen again.

Some rights activists including myself took to social media to demand an official statement from the police as all Harare police stations claimed to not have seen the women. ZRP issued a statement on their twitter page simply saying they did not have Joanna, Cecilia and Netsai in their custody. It became clear that the young women had been enforcedly disappeared and that their lives were in grave danger.

Zimbabwean political activists and human rights defenders proceeded to give the police and government until 13:00 hours on Thursday to produce the three but that never happened. We then resolved to take to the streets to protest until the government produced the missing women.

In the early hours of Friday morning, before the planned protests demanding their release commenced, we heard the young women had been found at Muchapondwa (which ironically means you will be beaten/murdered in Shona), Musina in Bindura South, about 87km from Harare. Their lawyers and some MDC members accompanied by police officers, went to get them.

They were horrified by the state they found the girls in. They were all distraught, the youngest, Netsai was crying inconsolably, and could not speak. They were filthy, their clothes torn and in different states of undress. Joanna and Cecilia were unable to walk. When I spoke to comrades who managed to see them and talk to them, and saw the pictures they shared with me, I also broke down in tears and posted these tweets:

“I have been unfortunate enough to lay my eyes on pictures of the 3 ladies soon after they were rescued & I cannot stop crying, My life will never be the same again, Never have I witnessed so closely, Such an uncurbed degree of cruelty, An effort to break a people. #ZanuPFMustGo”

“It is shocking, Unacceptable from all angles, That after a demonstration by men & women, Police targeted 3 women for enforced disappearance & torture. It betrays the terroristic nature of the perpetrators, The animalistic nature of those at the helm of #MyZimbabwe. #ZanuPFMustGo”

“The strategy to target women is commensurate in Zimbabwe only with Gukurahundi. When police brutalized 2 women in Bulawayo it was a shocking but isolated incident, Could have been explained as crimes by individuals. Taking the MDC3 shows it’s a pattern, A strategy. #ZanuPFMustGo”

The Zimbabwean government seems to be at war with women

The abduction, torture and sexual assault of the MDC political activists came barely a month after another horrendous and brutal ethnicised attack on 16 April, on sisters Nokuthula (37) and Ntombizodwa (30) Mpofu by six ZRP officers in Cowdray Park, Bulawayo, under the guise of enforcing the Covid-19 lockdown.

The sisters were wrongfully arrested whilst shopping at a local supermarket for allegedly breaking lockdown laws. They were forced to march through bushes to the police station and tortured and severely assaulted on the way and verbally taunted about their Ndebele ethnicity.

A video of the women circulated on social media where they explained how the police had beaten them up and refused to let them go home even after offering to pay the stipulated fine for flouting lockdown regulations. In the video, Nokuthula and Ntombizodwa told gruesome stories of torture and how the police kept hurling tribal slurs at them telling them they were troublesome Ndebele women. They explained how they had been abused over a long period and detained overnight despite having the means to pay the fine and be released.

It was clear that from the brutalisation of the women and the ethnic slurs that accompanied that the attack on them was gender and ethnically motivated.

This left many people from southern Zimbabwe angry and many said the incident reminded them of the Gukurahundi genocide when women and children were assaulted, raped and killed by Zimbabwe’s 5th Brigade army for which perpetrators, including then Minister of State Security, now President Mnangagwa, and then Gukurahundi Commander, Colonel Perence Shiri, now Minister of Agriculture, have not been held accountable almost 40 years later.

Similarly, when the MDC women were found, they also told gruesome stories of how they were beaten, sexually assaulted and forced to eat and drink each other’s excreta. They said they had been taken from Harare central police station in a black car and had their heads covered with sacks and taken to a forest and placed in a pit where the torture occurred.

ZRP insists it never arrested the three women. The police spokesman (Paul Nyathi) who confirmed their arrest has since retracted his statement claiming he was misquoted or misunderstood by both newspapers.

The Police Commissioner-General, Goodwill Matanga, was asked at a press conference where Joanna Mamombe’s car was and he claimed police were not in possession of the car. The next morning independent daily newspaper, Newsday, splashed on its front page, a picture of Joanna Mamombe’s car, parked at Harare Central Police Station, clearly confirming that she had been there before being taken away by state agents. The Minister of Home Affairs, Kazembe Kazembe, read a statement to the nation that police would investigate the “alleged abduction”.

There is everything fundamentally wrong with ZRP investigating these cases. How can they investigate themselves?

For justice to be served, there must be an independent inquiry and investigation into these matters. As we speak police officers are standing guard over the victims at the hospital subjecting them to even more trauma. The ZRP forensics team has been accused of leaking pictures of naked women and claiming it was the MDC activists in a bid to prove they are lying about having been tortured.

Hearing Nokuthula, Ntombizodwa, Joana, Cecilia, Netsai and Moreblessing’s accounts about their ordeals is like reading a page from a Gukurahundi victim’s diary.

In Bulawayo, six police officers have been arrested and charged before the courts for the abuse of the Cowdray Park sisters. Reports indicate that one of the alleged perpetrators has been assigned the task of investigating the torture of Nokuthula and Ntombizodwa. There are serious concerns about a whitewash. The station commander in charge of the police station where the two women were detained is also hardly an independent party.

What the government of Zimbabwe disingenuously tries to get people to ignore is that the United Nations Convention against Torture and Other Cruel, Inhuman or Degrading Treatment or Punishment does not limit torture to beatings and other physical assaults that leave visible scars. The ZRP and Zimbabwe National Army are notorious for using torture that leaves no visible scars. Anyone who has been arrested and beaten by police will tell you they beat them under their feet. A tactic police have mastered over the years to coerce confessions out of arrestees without leaving obvious evidence of torture.

As if that was not enough, on Monday, 19 May, Moreblessing Nyambara, a Mathematics teacher and senior member of the Amalgamated Rural Teachers Union of Zimbabwe (ARTUZ), who herself was abducted in September 2018, reported how on 16 May 2020, in Domboshava, she too had been severely beaten by six men, one of them in army uniform, for posting a video calling on Zimbabwean women to protest the abductions, torture and sexual abuse of Joanna, Netsai and Cecilia. She sustained serious injuries including a broken arm. Her assailants accused her of inciting women to turn against the government and wanting the country to be led by women.

What is most disturbing though, yet unsurprising, about these attacks is the similarity with the methods used by 5th Brigade soldiers in the Gukurahundi massacres. The scale notwithstanding, both these attacks bear the hallmarks, strategies and tactics of Gukurahundi. As explained by my informant, they (5th Brigade) too would rape their victims and force them to ingest human excreta, from menstrual blood to urine and faeces.

Hearing Nokuthula, Ntombizodwa, Joana, Cecilia, Netsai and Moreblessing’s accounts about their ordeals is like reading a page from a Gukurahundi victim’s diary.

Unfortunately, the similarity is not a coincidence. One of the surviving perpetrators of the Gukurahundi massacres is a man called Emmerson Mnangagwa. He is today, the president of Zimbabwe and the commander in chief of the Zimbabwe Defence Forces and intelligence organization, today accused of torturing women for the same reasons Gukurahundi was unleashed, opposing Zanu-PF.

Only a democratic people power revolution can free Zimbabwe. DM/MC