By Darlene Miller and Erin McCandless• 20 May 2020 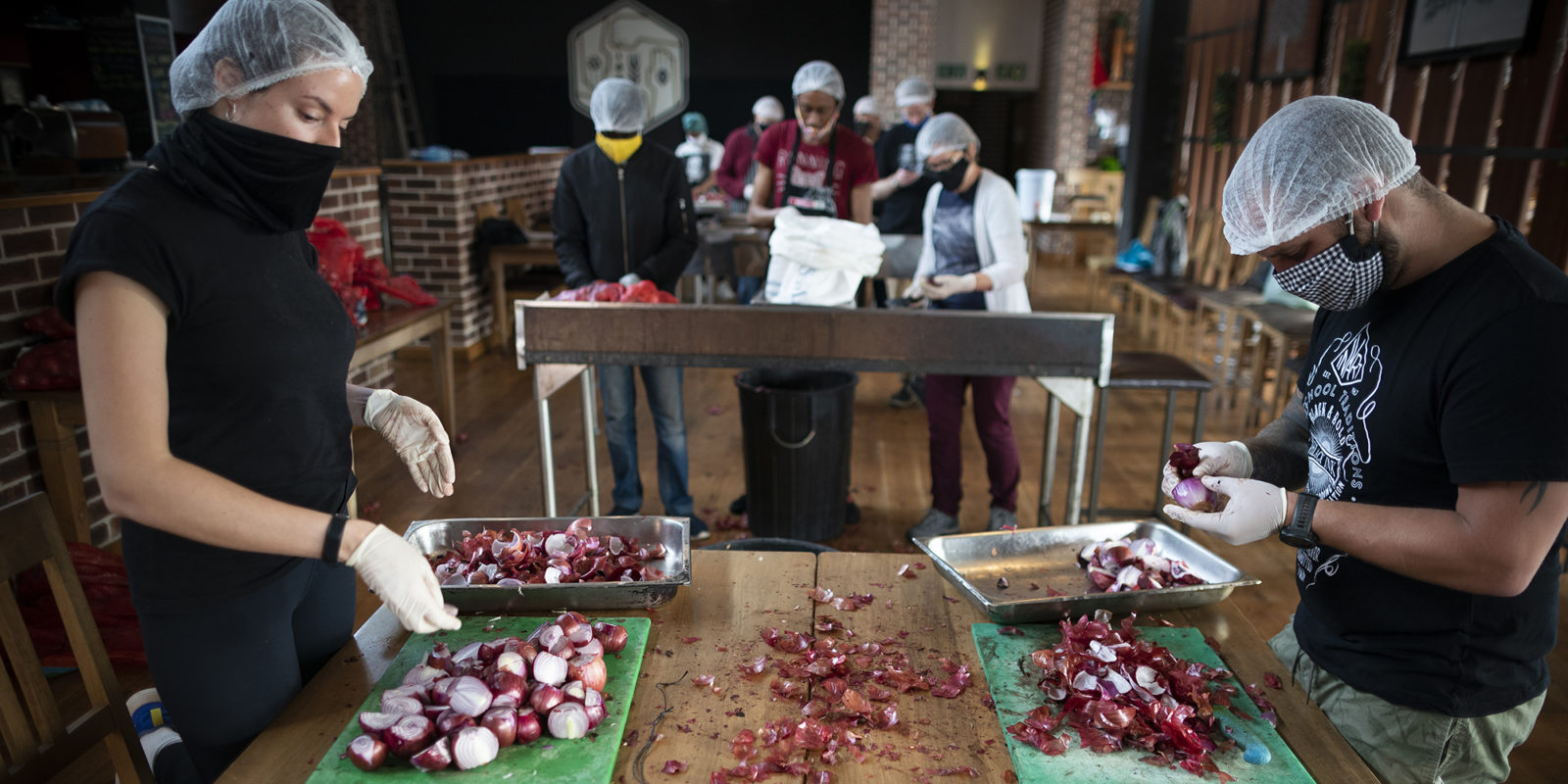 Volunteers cut vegetables to be made into soup at the Woodstock Brewery in Cape Town, 18 May 2020. (Photo: EPA-EFE / Nic Bothma)

Social cohesion lies in trust and respect, belonging and identity, and participation. When this fails, and human rights are violated, these bonds, ties and relationships suffer – as does trust in the state and its institutions, and the legitimacy needed for their functioning.

A security sector student at the Wits School of Governance a few years ago challenged a lecturer, saying, “I kill people. What can you teach me here?” An isolated incident, and yet one that was unsettling for those of us intent on bringing peace and development into our approach to security.

In the current Covid-19 national disaster, as part of his comprehensive intervention, the president deployed troops in South Africa’s residential areas. This was deemed necessary as a measure to ensure compliance with our nation’s lockdown measures since 20 March 2020 – 73,000 troops were deployed for this purpose. Criticisms have followed the military’s conduct in townships, with anecdotal evidence of abuses against citizens. The United Nations characterised our lockdown as authoritarian and “toxic”.

While President Cyril Ramaphosa has offered peaceful messaging to guide the security forces – that they should be a force of kindness and compassion, defending the people, and some radio phone-ins evidence that many in the security sector are following this path – some SANDF and SAPs members have abused their power.  These have included shootings, baton and gun beatings, teargassing, humiliation, abusive language, water bombing, and invasion of backyard spaces. This has occurred more in townships than in suburbs, where human rights violations have occurred.

Under apartheid, authoritarian rule in residential spaces was implemented by the police and the military. For black South Africans, obedience to the state was secured with violence and aggression. The prospect of a return to authoritarianism in everyday life is not something that many South Africans would treasure.

The disturbing aspect of these township abuses is that they build on both prevailing political cultures and legacies of brutal patriarchal masculinities, where discipline is enforced through violence against a subordinate or someone that is perceived as vulnerable.

Heralded by the World Health Organisation for swift action to address the pandemic, South Africa is also the recipient of international scorn. Michelle Bachelet, the UN High Commissioner for Human Rights, stated that emergency powers “should not be a weapon Governments can wield to quash dissent, control the population, and even perpetuate their time in power”. South Africa was among 15 countries identified where the violations were most troubling.

As concerns for authoritarian measures around the world mount, South Africa’s particular history demands attention to these issues to stay on course with goals of democracy and transformation.

The responsibility of citizens in the current context is at issue too. The night before lockdown, videos were shared on social media of a massive street party in Khayelitsha, Cape Town. The latest township jive at this street party included chanting “CORONA!” in a semi-celebratory way.

People brandished beers and alcohol in their hands. All this suggested that some segments of the nation were gearing up for an extended party during lockdown. Suburbanites meanwhile, watched in horror from the safety of their homes and their iPhones as this civil disobedience erupted. The cigarette and alcohol ban implemented by the state in lockdown and into the downgraded Level 4 has sobered our ebullient fellow citizens, who now hustle Kent and other cheap cigarettes on the black market.

Many township residents resent the deepened deprivation and security sector heavy-handedness that came with lockdown, and varied forms of civil disobedience have resulted. When civilians disobey, it is in part a rebellion against conditions that to them are inhumane. In these conditions, lockdown then has to be enforced through coercion rather than consent, and a military steeped in masculine cultures of violence may flaunt and abuse the personal power that attaches to their surveillance role.

These abuses are concerning trends that undermine the potential for a resilient social compact on Covid-19, and opportunities that the crisis presents for its strengthening. We argue that, in addition to a critical focus needed on addressing the differential socioeconomic impacts and needs of vulnerable groups, greater attention is needed on how policies instrumental to addressing the pandemic are implemented, with an eye towards building social cohesion and ensuring that social solidarity is nurtured through this crisis.

On 21 April, Rhamaposa laid out the government’s phased economic plan to respond to the Covid-19 virus, requiring a “new social compact among all role players – business, labour, community and government – to restructure the economy and achieve inclusive growth”.

Research across nine countries engaging the social contract concept, including in the South African context, found that social cohesion is a key driver, and that its achievement rests on progress by other drivers – inclusive political settlements addressing core issues dividing people, and institutions delivering fairly and effectively.

Social cohesion, both vertically (between state and society) and horizontally (between citizens and groups in society), lies in areas of trust and respect, belonging and identity, and participation. People need to feel included and that they belong – and that policies and practices deliver on expectations and agreements. When this fails, and further, human rights are violated in the process, these bonds, ties and relationships suffer – as does trust in the state and its institutions, and associated legitimacy needed for their functioning. The psychological sense of unity at the heart of social solidarity also suffers, as people see and feel that unfair and unequal treatment playing out.

What is a resilient social compact? At the broadest level, it can be considered a dynamic agreement between state and society and groups in society on how to live together, and how to address issues of power and resources. For such an agreement to contribute to peace and societal wellbeing, it must be reflected in mechanisms, policies and responses, that uphold the agreement, and how these are implemented – in ways that are flexible and responsive and particularly in times of crisis.

We need to work towards this in the South African context. The use of the social compact to guide policy direction is not new for South Africa, yet critically, this economic framing misses social and political elements needed to support transformative outcomes.

Class formation in South Africa follows racial geographies of suburbs and townships, with suburbs still predominantly white after 26 years of democracy, and poor, crime-ridden townships still predominantly black. These are structural conditions that do not change with legislation and social grants; these are also the conditions that bedevil policy implementation. The intersection of class and race geographies makes the implementation of a social compact potentially unachievable.

There is no question therefore about Covid-19 presenting profound challenges for citizens and the state. Citizens have had to radically change their lives overnight, with terrifying loss of livelihoods for many, and profoundly challenging new social conditions for most. The state is having to deliver on governance and public service delivery functions – in a radically altered setting, characterised by an extreme security threat and deep economic crisis.

Building trust and cooperation, vertically between state and society, and horizontally between social and stakeholder groups in society, is paramount.

Like poor people around the world, township residents develop strong bonds of social cohesion based on survival. Such survival requires social interaction, much of it physical in high-density living spaces. As the state and the economy fail these residents, they have no option but to turn to one another for help.

First, there must be vigilant government commitment to the notion that coercion is not a good foundation for a social compact. Swift action on security sector abuses and effective communication with the populaces affected is needed. This should accompany strong assurances for accountability and justice, and upscaled training of SANDF and SAPS in crisis response functions.

Second, more attention is needed towards two-way communication channels that offer means to build trust and legitimacy of government actions. This is particularly vital in crisis settings, where constitutional deviation is in play. Township residents must be able help shape the nature of the security and other crisis response measures being taken in their name. Widely accessible and consistent messaging is needed, with clarity around criteria and principles guiding policy.

As the sociologist Emile Durkheim stressed, social solidarity is forged when each segment of society works together at their various and prescribed roles and functions, cooperating for the greater social good. Such solidarity efforts are currently widespread in South Africa and around the world.

Like poor people around the world, township residents develop strong bonds of social cohesion based on survival. Such survival requires social interaction, much of it physical in high-density living spaces. As the state and the economy fail these residents, they have no option but to turn to one another for help.

The People’s Coalition has demonstrated ways of educating residents during this crisis in ways that build social solidarity. These stories need to be better shared to support greater unity in addressing this crisis – with a view to strengthening longer-term transformation efforts in South Africa.

These networks of social cohesion (Mosoetsa, S. 2011) and social solidarity may in many cases be more important than the government, which has failed to provide these communities with the decent livelihoods that they need.

The late Ben Turok, ANC leader and Member of Parliament, repeatedly reminded us in the early days of democratic transition that we needed to take care to be different from other post-independent African states who had turned from revolution and social democratic policies to authoritarianism and military government.

Extending our military tentacles into townships and residential areas has the potential to militarise governance in our country, particularly in townships where rebellion and poverty undermine prospects of a national social compact and civil obedience. If the dignity of citizens is not respected, a resilient social compact becomes just more rhetoric in the South African polity. DM

Dr Darlene Miller is Senior Lecturer and Erin McCandless Associate Professor in the Wits School of Governance, University of the Witwatersrand. This article builds on a shorter article in The Conversation.