Fish and Chips, like your favourite corner shop used to make (no change, take Chappies!) 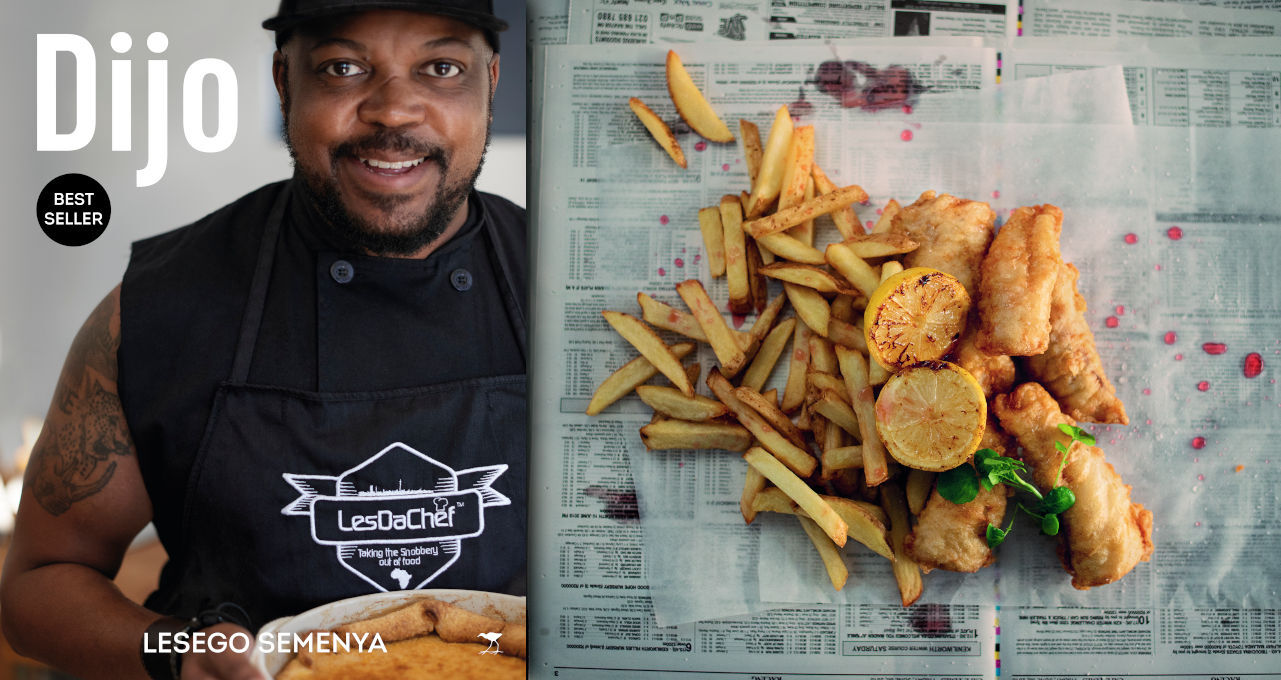 We’re bringing back Lesego Semenya, whose cookbook has been in print ever since it was published in late 2018 (remember those times? So near, yet so far…) for a little comfort food, which most of us need in our lives at the moment.

This recipe will fill all South Africans with salty, crispy nostalgia. It’s a little time-consuming, and not exactly healthy, but there are two things we all have right now: time, and a three-hour morning exercise slot.

In his cookbook Dijo: My Food, My Journey, Soweto-born chef Lesego Semenya, well known as LesDaChef, shares his journey from the corporate world to the kitchen, and offers township cuisine with a twist. His debut cookbook is an affirmation of South African cuisine, its heritage and its unique flavours. Full of mouthwatering recipes such as Cape Malay Pickled Fish, Springbok Terrine, Butternut Pie with Amarula, Chantilly Cream, and Inkomazi Panna Cotta, the book also features stunning photographs and beautiful food styling. “My goal as a township-born African chef trained in fine-dining cuisine,” Semenya says, “is to remove all the snobbery and showcase the important parts of our food: the stories and memories behind each dish, and the rich and beautiful heritage that comes with it.”

Before the big yellow arches made their way to South Africa and before the shopping malls filled with franchised fast food stores arrived, we had a culture of mom-and-dad fish and chips corner cafés. Known famously for never having change, phrases such as ‘no change, take Chappies!’ was a soundtrack to our experiences when getting our fix of greasy ‘slaptjips’ and fish or Russian sausages.

I’m lucky enough to live in the south of Joburg, where we still have a number of those corner cafés around and whenever I feel the urge to add a few kilos to my already complaining spare tyre, I head on over.

Growing up, my dad would buy fish and chips at the end of the month when he and my mom had been paid. It became a bit of a ritual: ‘padkos day’. This is how to make awesome fried fish and chips the cheffy way. It’s a bit more complicated than the general method but it is worth all the time spent preparing it. You’ll need a metal-tipped thermometer or electric deep fat fryer for this recipe.

First make the batter. Sieve the flour and corn flour together. This will help prevent lumps. Then whisk the flours, beer, egg and salt in a bowl. The beer will foam up at first. Make sure there are no lumps. Cover the bowl with plastic wrap and place in the fridge for at least 30 minutes.

Pour oil into a large pot. Turn the plate to medium and bring the oil to 180°C. Pat the fish down with a clean paper towel to remove any excess moisture. Season generously with salt and pepper. Drop the fish pieces into the batter. Do not move them.

When the oil is at the correct temperature, gently lift one piece of fish out of the batter with a pair of tongs, letting the excess drip off, and slowly lower it into the oil to avoid splashing. To prevent the fish from sinking to the bottom of the pot and sticking, use the tongs to hold it in the oil for a few seconds so the batter can solidify. Once it starts forming a crust, you can let go. Don’t fiddle with the cooking fish too much at first as this will break the shell the batter has formed. You can push the fish down into the oil with the tongs to get an even colour.

Serve the fish the simple old-school way with some red grape vinegar drizzled over the chips.

Repeat the process until all the fish is cooked. The oil temperature will drop as you add more fish. Counter this by increasing the heat. Keep checking the temperature of the oil with a thermometer. You need to stay at around 180°C. Cook the fish until golden brown, about five minutes. Place the fish on paper towel to drain the excess oil.

Cut the potatoes into 1 cm thick chips (no need to peel them first). Rinse well under cold water to remove starch, then drain. Place the cut chips in a pot of cold, seasoned water and bring to a gentle boil. Turn down the heat and simmer until a toothpick can pierce them but they are still firm. You don’t want them to get too soft. Drain in a sieve and pat dry. Allow to air dry and cool at room temperature and then place in the fridge until cold.

Heat your oil to 120°C and add the chips. Don’t overcrowd the pot, you want each chip to have enough space to move around. Fry for about five minutes at this temperature until cooked through but not coloured. Remove the pot, carefully drain the oil, pat the chips dry with paper towel and refrigerate once again once they have cooled. Allow to chill again.

Heat your oil to 160°C this time and add the chips. Cook until crisp and golden. Drain and season with salt and pepper. Serve. DM/ ML

Dijo: My Food, My Journey is published by Jacana Media (R345). Visit The Reading List for South African book news – including recipes! – daily.