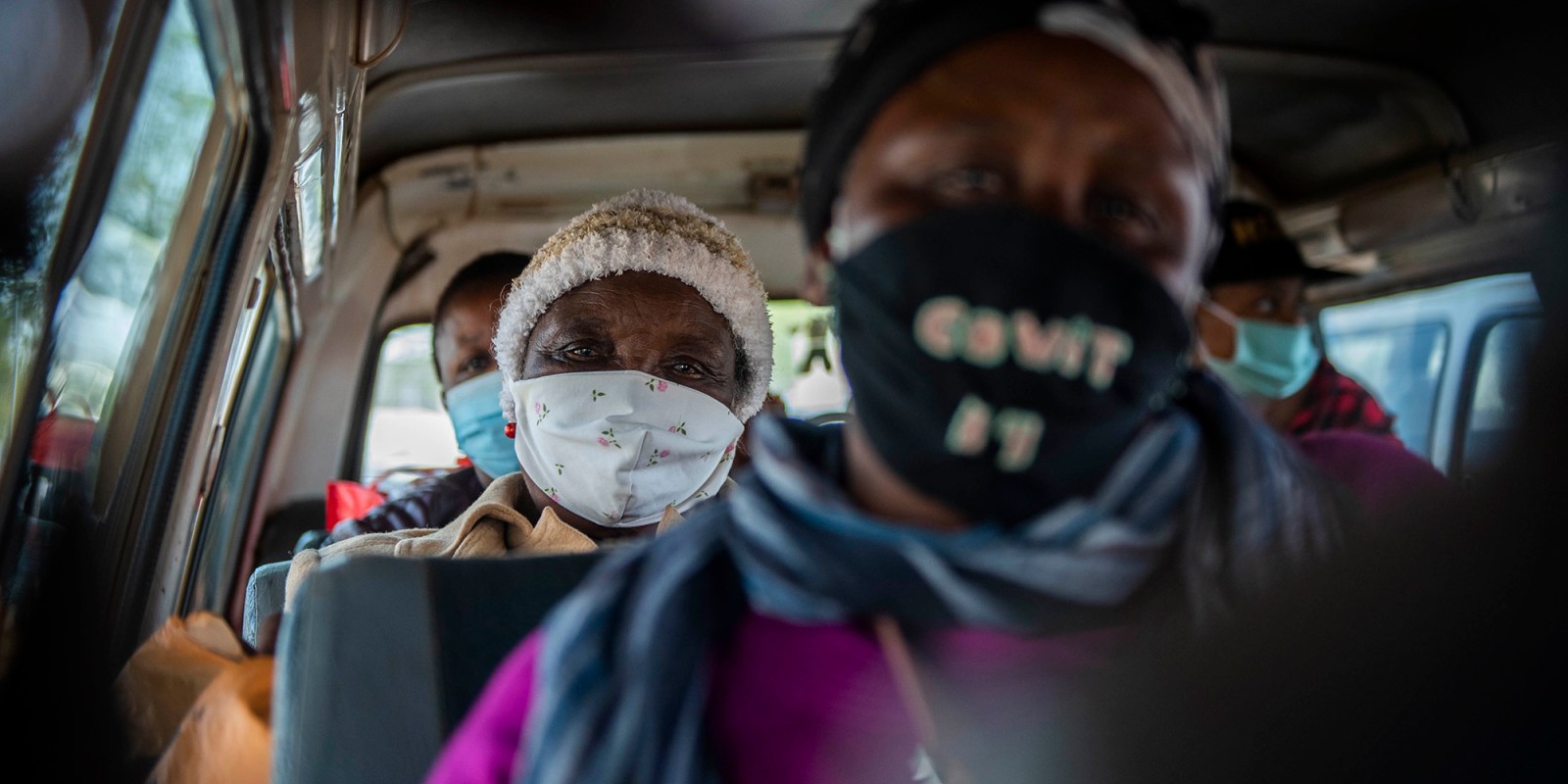 Commuters with masks in a taxi on May 12, 2020 in Tshwane, South Africa. The cry of the excluded is the cry of the majority of humanity, say the writers.(Photo: Alet Pretorius/Gallo Images/Getty Images)

This is a high-level summary of the trending, highest impact, and most active themes and narratives related to social cohesion and division as identified from South African social media conversations on 18 May 2020.

The day’s top trending topic by volume was “President”, driven by Cyril Ramaphosa’s call for solidarity and commentary on the address to the World Health Assembly.

@SABCNews tweeted a link to the President’s virtual address to the World Health Assembly at 17:20, calling for global solidarity to fight the coronavirus crisis. Most responders were disgruntled, with one labelling Ramaphosa a “Rupert President”.

In his weekly newsletter published at 07:52, President Ramaphosa welcomed engagement on the lockdown regulations, saying polls had confirmed that South Africans enjoyed nothing better than robust conversations on the burning issues of the day.

Conversation about the tobacco ban was the second highest topic by volume.

The DA’s Dean McPherson alleged that Minister Nkosazana Dlamini Zuma withheld information from the nation over extending the ban on tobacco sales. The minister had said the 2,000 objections that were among the reasons for continuing the ban were “not readily available”. Many are now demanding information about the objections.

“Criminal records” trended with a 63% burst after Parliament’s Portfolio Committee on Justice considered the issue of criminal records for lockdown transgressions remaining in place after the lockdown.

The ACDP’s Steve Swart asked Legal Aid SA whether South Africans were aware of the consequences of paying admission of guilt fines. Following several news articles about the issue, The South African reported at 18:14 that Deputy Minister of Justice John Jeffery had advised that new legislation was being considered.

Many gestures of generosity have brought diverse South Africans together, working in solidarity to support the needy in this unprecedented crisis. The Muslim Association and members of gangs in the Cape Flats Gangsters providing donations to destitute communities trended among the day’s top topics.

Members of opposing gangs in the Cape Flats have called an unprecedented truce to help members of their community. On Monday, members of the Americans and the Hard Livings gangs worked side by side to deliver bread, flour and vegetables to needy families in their communities.

@phaphamamlfm from the Phaphama Breakfast Show on Munghana Lonene Fm posted a poll: “do you have a mask?”. The poll was the second top post by reach for the day, receiving 1,435 votes by Monday.

The second top post by impact was a Harper’s Bazaar article about Kim Kardashian collaborating with Skims to donate 10,000 seamless face masks to charities, including the National Domestic Workers Alliance, Baby2baby, the Good+Foundation, and the Los Angeles Food Bank.

The Gauteng Department of Education has launched Covid Brigades, a programme to place youth in schools and government buildings to conduct screening, data collection, and to monitor compliance with social distancing and sanitising regulations. The youth will be trained and paid stipends upon deployment.

The Western Cape was sixth by volume in the coronavirus conversation yesterday with 1,287 mentions.

The City of Cape Town featured strongly in the online conversation yesterday, with 1 080 mentions. The city came under scrutiny for proposed bylaw amendments.

@DeeSmythe’s tweet that the city’s plan for managing the lockdown had been presented to the COGTA Comm and approved by the Provincial Command Council @DeeSmythe’s was the top retweet in the Cape Town conversation, with a reach of 19,508.

The Cape Town conversation included appeals to residents to take the coronavirus more seriously and adhere to lockdown. Many spoke about relatives or friends who were dying from Covid-19.

The global response to the coronavirus has been a complicated and unprecedented event. Accusations over the management of the response have ranged from corruption and conspiracy to mismanagement and negligence.

The World Health Organisation(WHO) said it would initiate an independent evaluation of it’s response to the coronavirus.

A tweet by @CGTNOfficial about the WHO announcing the evaluation was liked 111 times and re-tweeted 37 times. The majority of responses were suspicious of the WHO.

A recent video, purportedly of tanks being delivered to the South African government, has been trending on social media. Mis-attributed videos like this have contributed to many conspiracy theories on the origins of the coronavirus, the impact of 5G, the involvement of Bill Gates and the possibility of military action being taken in South Africa.

The Caxton Local Magazines group’s articles across a number of their sites featuring the video of the “tank delivery”achieved a high reach on social media.

The article concludes with @darren_olivier analysing the video on Twitter: “1. Probably filmed in Namibia, not South Africa. 2. These are vehicles being delivered overland to the Botswana Defence Force. Known orders, nothing unusual. 3. Has nothing to do with the lockdown, Covid-19, or any conspiracy theories about foreign troops”. The Tweet was viewed 7,500 times. DM