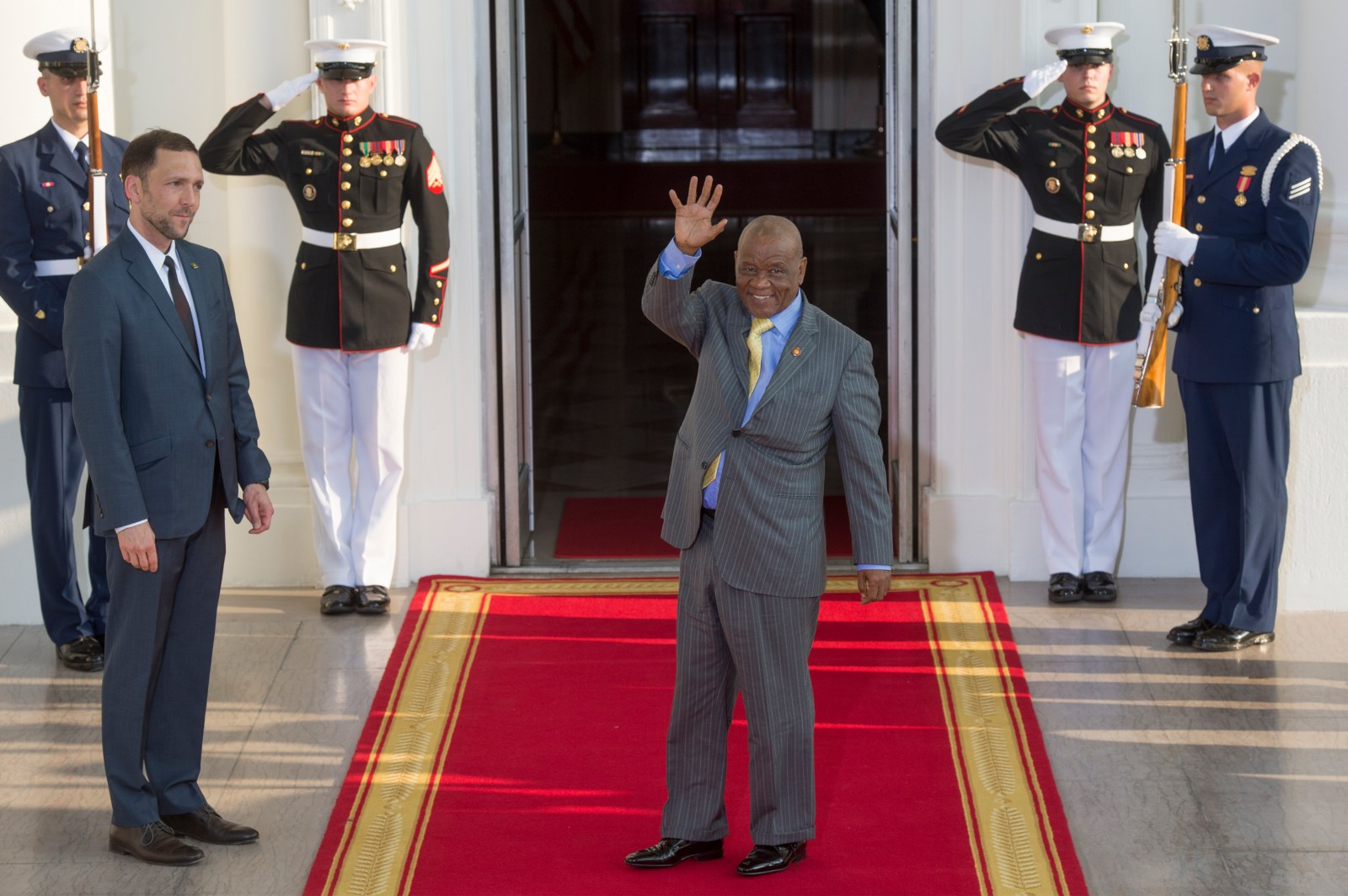 epa04342403 Prime Minister of Lesotho, Tom Thabane (R) waves beside US Chief of Protocol Ambassador Peter Selfridge (L), upon arriving at the North Portico of the White House, in Washington DC, USA, 05 August 2014. On the occasion of the US Africa Leaders Summit, US President Barack Obama is hosting about fifty African heads of state and government for a dinner at the White House. EPA/MICHAEL REYNOLDS

Finance Minister Moeketsi Majoro is to take over the government on Wednesday.

Lesotho’s tenacious Prime Minister Tom Thabane will finally be out of office on Wednesday, it seems, ending months of tortuous efforts by his political foes to lever him out of the job.

The country’s Council of State met on Monday and decided that it would replace Thabane with Finance Minister Moeketsi Majoro, who would be sworn in on Wednesday. Thabane is a member of the council.

Majoro heads a new majority coalition comprising defectors from Thabane’s camp in his own ABC party as well as smaller parties.

ABC MP Sam Rapapa confirmed to Daily Maverick that the Council of State had decided to replace Thabane with Majoro, though no official announcement had been made.  After the meeting.  Thabane had then told his Ha Abi constituency that he would be quitting as prime minister – but not as leader of the ABC. However, Rapapa also noted that Thabane “has not issued two lines” to formally announce he would be quitting the prime ministership.

So it was not quite clear if Thabane had quit or had been fired by the Council of State. Rapapa said the ABC was not too concerned about Thabane’s insistence on remaining ABC leader. ”Whether it takes six months or 12 months we will replace him as leader,” he said.

“Why would someone who has already said he is too tired for the job and is an old fellow who has worked enough already now decide that he wants to stay on as party leader?”

Thabane told the ABC in January that he intended quitting as prime minister by the end of July as he felt he no longer had the energy to do the job. The party had finally demanded he stand down over the accumulated embarrassment it had suffered from the antics of his second wife Maesaiah, culminating in her being charged this year with the murder of his estranged second wife Lipolelo in 2017.

The pressure on Thabane to resign mounted when the police later announced that they intended charging him also for complicity in the murder.  Thabane continued to resist the pressure and called out the army last month to protect him from what he claimed were illegal attempts to oust him.

This was after the courts ruled that his suspension of Parliament in March was illegal and that it should be allowed to meet again immediately. Thabane feared that if it did meet, it would pass a vote of no confidence in him, as by then his governing coalition had collapsed.

His order to call in the military prompted intervention from the South African government. President Cyril Ramaphosa, who is special envoy for Lesotho of the Southern African Development Community (SADC) sent ex-cabinet minister Jeff Radebe to Maseru to meet Thabane and other political and civil society leaders to defuse the crisis.

They issued a statement saying Thabane would be allowed to leave office with dignity and his political opponents insisted that the agreement was that he would retire within days.

But immediately after Radebe left, Thabane told local media he would leave in his own time and would not be dictated to by outside forces.

His political opponents then changed the constitution to deny Thabane the option of dissolving parliament and calling fresh elections if he lost a vote of no confidence in the National Assembly.

Thabane’s apparent last roll of the dice was to refuse to quit last week, claiming that he could not be replaced as prime minister by Majoro as Majoro was not the leader of any political party. The ABC had replaced Thabane with Majoro as leader some weeks ago but Thabane refused to accept the decision as he said it had not followed proper procedure.

Thabane last week invoked Section 87 (2) of Lesotho’s constitution which says: “The King shall appoint as Prime Minister the member of the National Assembly who appears to the Council of State to be the leader of the political party or coalition of political parties that will command the support of a majority of the members of the National Assembly:”

In spite of the technicality over who leads the ABC, the Council of State evidently exercised its discretion on Monday by deciding that Majoro nevertheless appeared to be the leader of the political party or coalition that enjoyed majority support in the National Assembly.

The ABC is expected to hold a congress soon to formally elect Majoro as its leader.

If Thabane does indeed vacate his office on Wednesday, as now seems inevitable, it will close a turbulent political career in which he was forced to flee to South Africa in 2014 after an apparent coup attempt by the head of the army; was restored to office under South African and regional military protection; lost the snap elections mediated by then Deputy President Ramaphosa in 2015; and then returned to office after winning the next elections in 2017.

Thabane’s final and most fatal mistake was his affair with and then marriage to Maesaiah, almost 40 years his junior. She began meddling aggressively in government affairs – earning the sobriquet of “Lesotho’s Grace Mugabe” – which alienated Thabane’s support in the ABC and wider government.

Her alleged complicity in the murder of Lipolelo was the final straw for the ABC and its coalition partners. DM