Can you hear The Great Animal Orchestra? 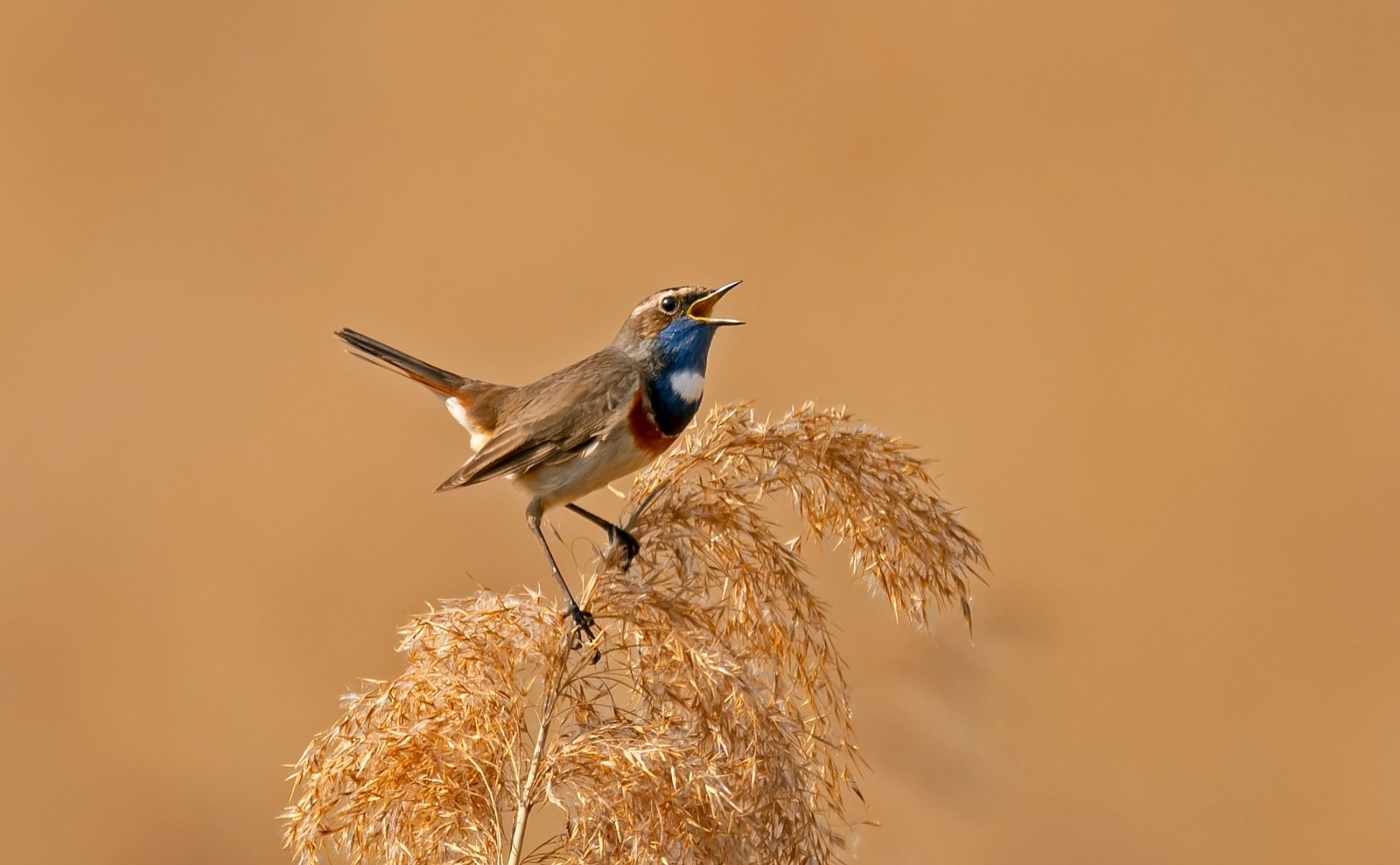 A bluethroat (Luscinia svecica) sings in the nature reservation Wagbachniederung in Waghaeusel, near Karlsruhe, Germany, 09 April 2020. The Wagbachniederung is an important breeding and resting place in Europe for breeding birds, which are endangered by extinction, and is one of the most important bird protection areas in Germany. EPA-EFE/RONALD WITTEK

In early April scientists found that as many of us stayed home, the planet’s noise levels suddenly went down, the Earth’s crust vibrated a little less and many were hearing more wildlife…

Back in 2016, the BBC reported that “the world now sounds different to how it did a century ago”. The reason? “We have triggered animal extinctions and climate change, and both have altered the way our world sounds,” said journalist Claire Asher.

Warmer temperatures transformed the tune of our oceans; the sound of chunks of glacier falling into the water made for a heartbreaking and poignant splash; birds’ songs are, at times, being muzzled by the roaring engines of flying jets; oceans’ acidification has made the striped snapping shrimp snap a little less loudly. And these are only a few of the many changes that are slowly affecting our auditory environment.

Fast-forward to 2020 and a worldwide lockdown has changed, once again, the world’s melody.

Listening to the sounds of our planet is nothing new: In very simplified terms, a “sound source” creates a sound, or vibrations, which then reverberates through a medium. Those waves can travel through mediums such as air, water, gas or solids. (Electromagnetic waves need an electromagnetic field.)

Although this concept seems obvious today to most of us, back in 1864 it was an uncharted cacophony. Until a Scottish mathematical physicist, James Clerk Maxwell, developed a theory on electromagnetism that brought to front of stage the concept of electromagnetic waves. His theory was groundbreaking and is said to have sparked both quantum mechanics and Einstein’s theory of special relativity. But it took eight years after Maxwell’s death, and another physicist, German Heinrich Hertz, to prove the theory and define, among other things, radio waves.

Years later, in May 1964, electromagnetic waves would come back in an unexpected way, “a strange maddening hum” that came through two American astronomers’ radio telescope. Robert Wilson and Arno Penzias first thought the noise was coming from pigeons who had made a nest in their telescope, but once they had chased the birds away, the hum persisted. The “sound”? The ancient wave that began saturating the universe just 380,000 years after its creation… the echo of the Big Bang that happened some 13.8-billion years ago.

Today, we measure and describe sound in terms of frequency, which itself is measured in Hertz (Hz); whales, elephants, rhinoceroses, giraffes, peacocks, pigeons and moles are among the animals that can hear low-frequency radio waves (under 20 Hz) or infrasound; humans can only hear (in theory) between 20 and 20,000 Hz while bats and dolphins can hear and produce ultrasounds (high-pitched sounds).

Associate Professor of Digital Sound and Interactive Media at Arizona State University, Garth Paine, explains in The Conversation that animals are not the only ones to use sound to communicate. “So do plants and forests. Plants detect vibrations in a frequency-selective manner, using this “hearing” sense to find water by sending out acoustic emissions and to communicate threats.”

And beyond frequency and pitch, the study field of sound is vast: bioacoustics (how animals communicate), psychoacoustics (how humans perceive sounds), aeroacoustics (the study of noise) or even anthropophony (the sound produced by humans or by something we’ve created).

The effect of anthropophony on the animal world is one of the subjects that has been driving American polymathic musician, former member of the folk quartet The Weavers, Moog synthesiser player for The Doors and soundscape ecologist, Bernie Krause, for over 50 years. Since 1968, he has been interested in capturing the wilderness’ auditory imprint, but it was after Krause worked on the soundtrack of Coppola’s 1979 film, Apocalypse Now – a strenuous collaboration – that he dropped his mic (or rather his synthesiser) and travelled the world with a recorder, chasing the music of the world instead.

“When I first began recording wild soundscapes 45 years ago,” Krause said in 2013 at a TED Talk, “I had no idea that ants, insect larvae, sea anemones and viruses created a sound signature. But they do. And so does every wild habitat on the planet, like the Amazon rainforest you’re hearing behind me. In fact, temperate and tropical rainforests each produce a vibrant animal orchestra, that instantaneous and organised expression of insects, reptiles, amphibians, birds and mammals. And every soundscape that springs from a wild habitat generates its own unique signature, one that contains incredible amounts of information…”

Since then, he has been on an expedition to record the animal world’s music, globe-trotting to catch here the croak of a frog, there the cry of a wolf, or the trumpeting of an elephant, until he realised that acoustically, you cannot dissociate one species from another.

This would be “like trying to understand the magnificence of Beethoven’s Fifth Symphony by abstracting the sound of a single violin player out of the orchestra and hearing just that one part. You’ve got to hear the whole thing,” he said in a 2016 interview with The New York Times.

Dubbed “The Niche Hypothesis: A virtual symphony of animal sounds, the origin of musical expression and the health of habitat”, Krause’s paper, published in 1993, confirmed the idea that “there is a symphony of natural sounds where each creature voice performs as an integral part of an animal orchestra”. In short, animals don’t randomly sing – they play together, and that if only humans could finally shut up, they would hear the music play.

Interviewed for an episode of NPR’s Invisibilia, The Last Sound, Krause added:

“A great silence is spreading over the natural world even as the sound of man is becoming deafening.”

That suddenly changed in April, when the world went into lockdown and scientists found that as many of us stayed home, the planet’s noise levels suddenly went down, the earth’s crust vibrated a little less and many are hearing more wildlife.

At the time Paris asked its inhabitants to stay home and the city went into confinement on 17 March 2020, “a group that monitors noise pollution saw as much as a 90% drop in human sounds”, said NPR. Meanwhile, the Royal Observatory of Belgium observed that vibrations caused by human activity had “fallen by about one third” since Brussels went into confinement, while in Nepal, seismic graphs showed a stunning 80% drop in some cities says National Geographic. Such discoveries popped up everywhere as measures of containment spread throughout the world.

The result? The Earth’s crust, particularly sensitive to the movement of tectonic plates as well as our noisy vibrations, started to move less, allowing detectors to possibly spot smaller earthquakes and volcanic activity.

This forced silence is not just helping seismologists and animals – it might also be a soothing balm for our mental health. “Noise is more than an irritant: It also threatens our health. Average city sounds levels of 60 decibels have been shown to increase blood pressure and heart rate and induce stress, with sustained higher amplitudes causing cumulative hearing loss. If this is true for humans, it might also be true for animals and even plants”, says Paine. Silence can help us listen better – and as Paine explained, “Through more active listening, each of us can find a different connection to the environments we inhabit.” DM/ ML