Another Country: Hungry Children and the Quest for Four Big Pots 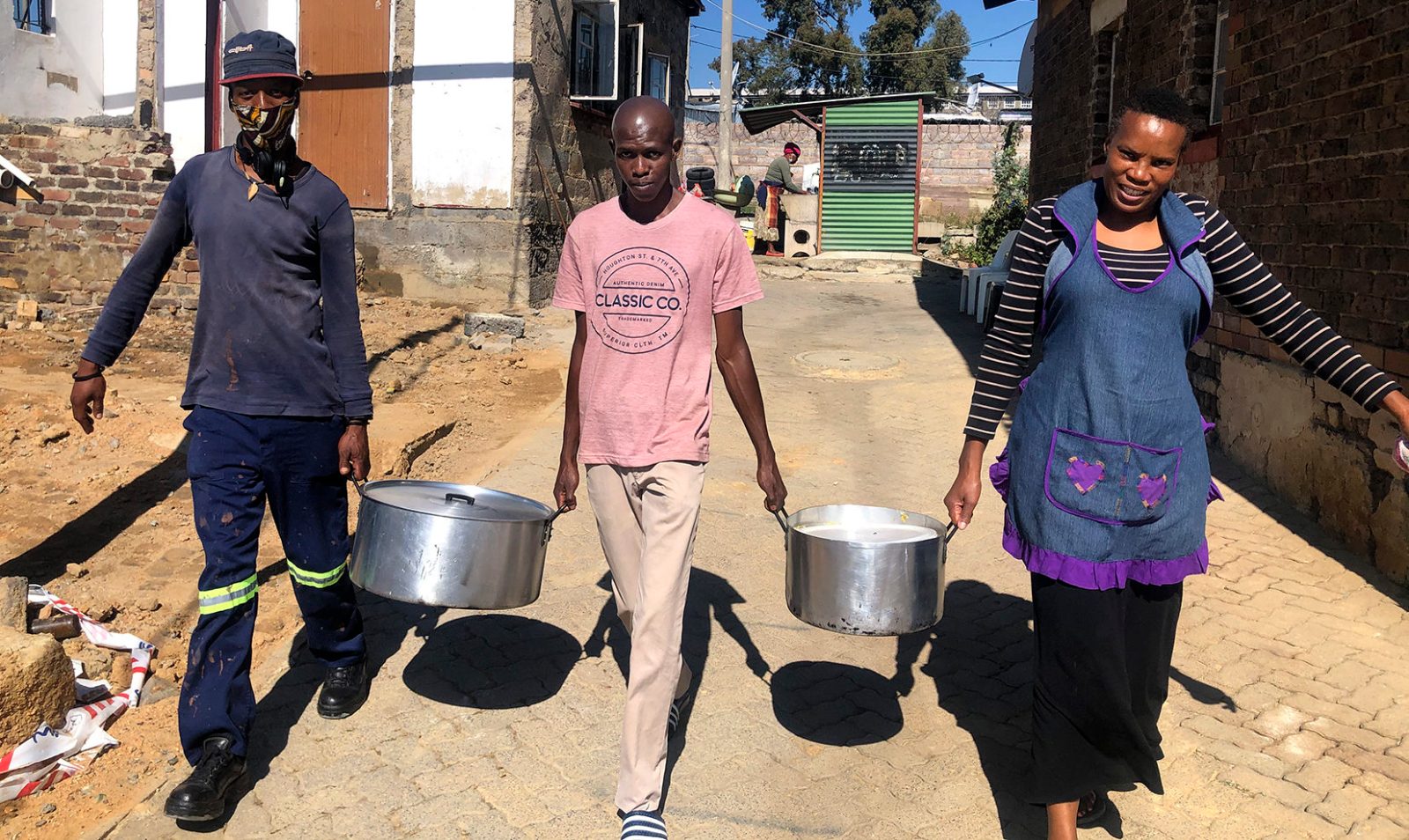 Caring for the Nation: Volunteers from Londani Lushaka carry pots of food to the spot where hungry people are lined up.

If Alexandra was sitting on a westward facing hill it would look directly over to Sandton, accusingly. Instead it faces to the East and is invisible to its well-heeled neighbour. Another country. This makes it possible for those who live and work in Africa’s richest square mile to ignore the suffering to which they are umbilically connected and to shun their responsibilities even in a time of crisis. But this article is not a story about guilting the rich; it is a positive story about those who get on with the business of saving lives, oblivious to their hardened wealthy neighbours. As if they live in another country. It’s a kind of fairytale.

On any given week day at around 1.15pm on a corner of 11th Street in Alexandra you will see children begin to gather in a line outside the Thusong Youth Centre. They are of all ages, but are mostly very young. They wear masks of many shapes and colors and carry empty plastic containers.

As the minutes pass the line grows and snakes down the alley way into the street. It is marshalled by volunteers.

At the gate to the yard that is the plot on which Londani Lushaka (‘Caring for the Nation’) has its home, there is another volunteer, spraying hand sanitiser and checking the special permits the kids carry before they are allowed in; then into another line, that takes them closer to the women who dish out food.

When they eventually get to the front of the queue the children give their names to a volunteer who writes it down in a register. Then they get five slices of bread (86 loaves are delivered daily by Albany), rice or samp (pap on a good day), cabbage and a mix of tomato, carrots and pumpkin (surplus food donated several times a week by SA Harvest, an organisation that “collects quality surplus food in refrigerated vehicles from a variety of sources and delivers it direct, without delay, and free of charge, to a wide variety of organisations that feed food-vulnerable people on a daily basis”).

The food is not eaten on site. The little bodies turn round, take their now full bakkies and disappear back into the warren of houses and shacks that is Alex.

For many of the 600 children this is the only meal they will eat for the day.

What is remarkable is that all of this is done by volunteers. Volunteers arrive between 7 and 8 in the morning to make the fire and start chopping vegetables; volunteers marshall the line, hand sanitise the children, dish the food; volunteers wash the pots and clear the rubbish; volunteers oversee and administer the whole project; volunteers get together at the end of the day for prayer rather than payment.

As I watched this efficient operation, I marvelled at the organising power and initiative of ordinary people. simultaneously wondered at the incapability of government, with all the resources that it commands, to support these most basic and necessary of functions and instead to want to snare them in bureaucracy.

How does it happen?

Londani Lushaka was set up in 2017, but only registered as a not-for-profit organisation (NPO) on Mandela Day 2019. It aims to provide a raft of programmes and interventions for vulnerable children in Alex, of which there are many. But boiled down to its essence it is the story of three women, the community whose problems they take ownership of, and now, keeping children fed in a time of famine.

Alice Modire is 49. She has lived in Alex all her life. She has a brother who is a Professor in Australia and a sister who lives in the suburbs, she stayed in Alex. According to Alice she has a passion to work with kids.

“I was once in a position where I didn’t know whether I was coming or going, and people were there for me. If you don’t know what you want in Alex, you get lost.” But in particular she attributes her passion to her mother, a teacher: “everything I do I took from her”.

Alice is also the chairperson of Emfundisweni Primary School where she “sees a lot of grief” but notes that “if you care for them then they tend to be ok and change their attitude.”

Irene Chauke is 42, a mother of two children, another indigenee of Alex. She works as a receptionist at an optometrist, that was until the need to serve hungry children took over. Her motive for kindness is slightly different:

“If you know hunger … if in your teenage years you went to bed without food, you wouldn’t wish it on anyone else. My mother was a single parent and domestic worker; sometimes we could go to sleep without food because we must wait for the month’s end,” she says.

Mavis Rathogwa is 66 and the Director of Londani Lushaka. She spent the last 16 years working for Lifeline and it’s there that she honed her passion and skills for advancing the lives of the most disadvantaged. But following her heart was something instilled early. She tells me she was the only girl of 13 children, and you sense that her life has been marked by hardship. Five of her brothers died (two from HIV, two from suicide and one struck by lightning) and she had to look after their children. “I had to ask ‘what if it were me?’ and it broadened my vision to help the community.”

She says Londani Lushaka was in her heart since 2017 and when she joined forces with Irene and then with Alice “everything gelled together.”

The three women found in each other a common concern with the plight of their people. Another Alex resident, Vincent Nzungi, a truck driver, “offered his place” for Londani Lushaka; his traditional Alex home and yard, once a tavern, now seems to have been taken over by a league of volunteers. Irene uses her university student son’s lap top computer. They are hoping for a partnership with the Seriti Institute to provide desperately needed administrative skills.

Their vision was, and still is, much broader than ‘just’ food relief. Mavis painstaking sketches it out to me: Aftercare, Youth Development, Victim Empowerment in relation to GBV; HIV; working with the Masiphephe Forum of stakeholders in Alex to respond to pressing social needs – but then Covid-19 came along …

“People are not handling it well,” says Alice, “you want to cry because of the situation you see, people are hungry, we wish we could do more .. when we dish out mealie meal people come like flies, adults want us to dish for them but we can’t help.”

So back to where we started.

My fortunate encounter with the women of Londani Lushaka and the children whose rights to food and dignity depend upon them, is due the series of articles Maverick Citizen published in March this year on food waste and food rescue. They led to me being contacted by Sandra Van Oostenbrugge, an itinerant activist and former resident of Alex, who the three women grandly call their “Marketing Director” because “so many people and connections come through her”. Van Oostenburg first told me that: “Currently am trying to rally up support for a feeding scheme a friend of mine started back here in Alex … Her and I did a Lifeline counseling course together eight years ago.”

A later email (which I quote in full) was more explicit:

“Trying to get my hands on bigger pots.

“The number of children we are feeding (with the help of SA Harvest & NOSH both NPO rescue & direct surplus food) back at 11th Avenue is growing.

“The pots that we bought with our own money & the money from a Ben 10 (or two) are no longer big enough.

“Contacted a few pot manufacturers in SA (no reply yet).

“Learned that people are quite attached to their pots.

“Do you have any pot connections :)?

“Am sure there is big, big pots standing in drying racks at catering firms that would love to be back at work!!”

I tried. I begged. I badgered. I found out a full set would cost in the region on R8,000. Along the way we made other useful connections that bought other donations but the big pots eluded us. That was why, when I visited Londani Lushaka this week, feeding the 600 kids was still out of a gaggle of small pots.

I thought, surely, in the shadow of Sandton, a set of pots – and possibly much, much more – might emerge from somewhere?

But the women are still waiting.