By Centre for Analytics and Behavioural Change• 17 May 2020 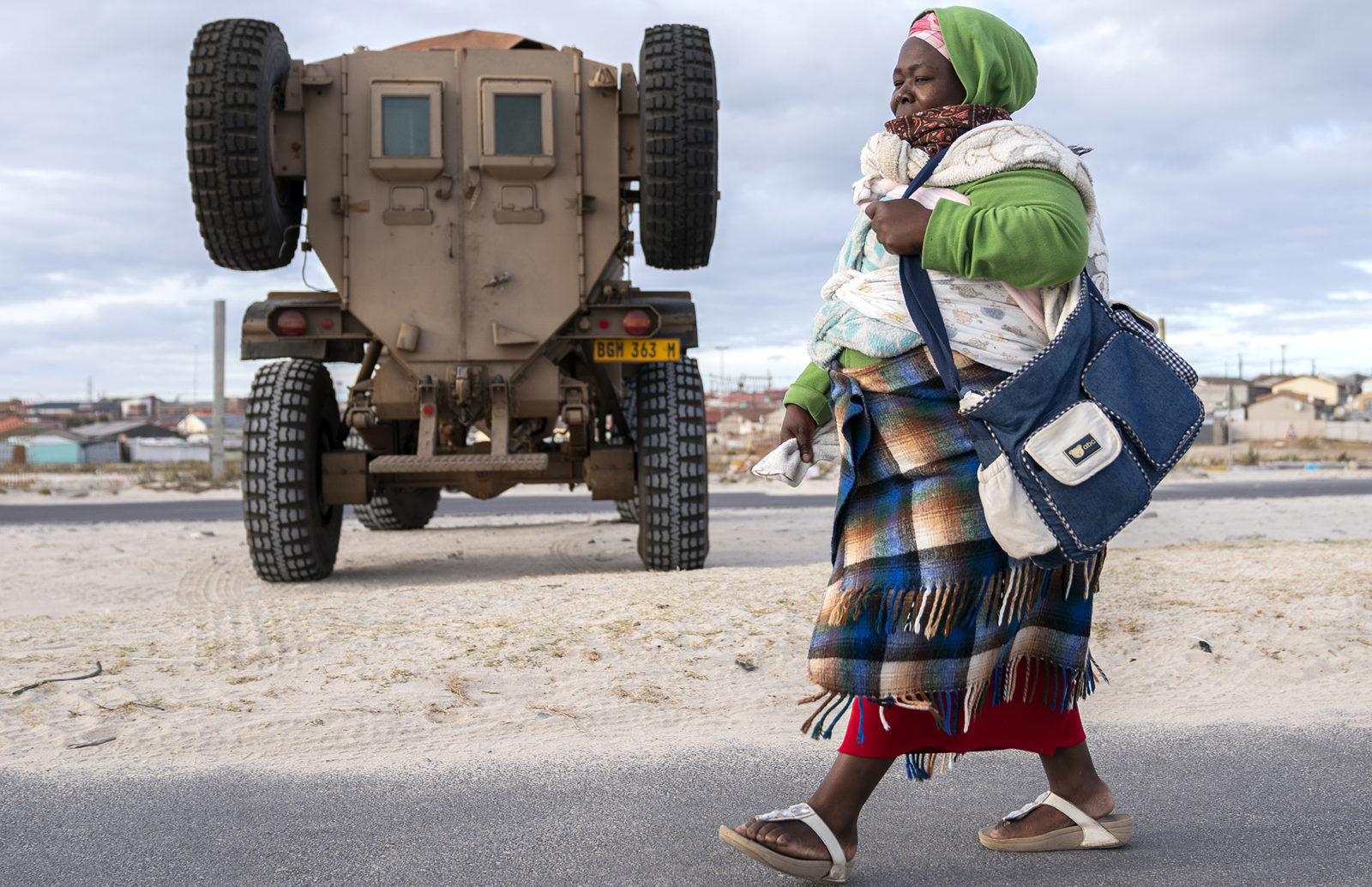 This is a high-level summary of the trending, highest impact, and most active themes and narratives related to social cohesion and division as identified from South African social media conversations on 15 and 16 May 2020.

President Cyril Ramaphosa’s consultations with Nedlac to move to level 3 trended 5th by reach on Saturday. An article about the Black Business Council’s plan to back government trended 8th by impact.

At 12.56 @JacksonMthembu tweeted that the president had asked Nedlac to advise on the intention to move from level 4 to level 3. The post was retweeted close to 100 times.

The topic of level 3 was the 6th highest trending topic by volume in the Covid-19 conversation. An Eyewitness News story “Black Business Council backs Govt’s plans to move lockdown to level 3” was a significant driver. The council hopes the economy will be reopened soon.

In his address earlier in the week, the president explained that parts of the country with high Covid-19 infection rates would remain on level 4, but new regulations would be introduced to relax some level 4 restrictions for business, exercise and e-commerce.

With more workers and civil servants testing positive after serving the public, a supermarket and police station has had to close temporarily. The topic “tested positive” trended 9th by volume on Saturday.

The Shoprite Group confirmed that Checkers Rylands Village has been closed until further notice for another decontamination and further screening of employees. This follows a staff protest outside the store demanding that the store be closed.

The story was reported by @ewnreporter “#CheckersProtest #COVID19 inSA Rylands Checkers employees are protesting after the store allegedly refused to close after 8 workers tested positive”.

Workers in Durbanville also fear that working conditions are not safe.

Police stations and police officers are increasingly being affected by Covid-19 with closures as a result of staff testing positive.

@SABCNews ICYMI tweeted: “The Witbank Police Station at Emalahleni in Mpumalanga has been closed. This comes after a national public order police officer from the station tested positive for Covid-19”.

Police stations at Emalahleni in Mpumalanga and Inanda in Durban have also closed, raising questions about support for workers on the frontline of the pandemic and their capacity to safeguard the public.

Ramaphosa urged citizens to take personal responsibility for their own health and the health of others to prevent the spread of Covid-19: “As restrictions are eased, we will need to observe social distancing even more carefully, wear face masks whenever we leave home, wash hands regularly with soap and water”.  Social media users are starting to go public with personal accounts of testing positive and being infected with Covid-19. @sibamazwai’s tweet “My whole family tested positive from Covid-19 including me” was retweeted widely, with over 3,000 people offering solace and advice on how to beat the condition.

South Africans came together on social media this weekend to offer financial and emotional support to those in need.

A tweet by @Sibamazwai about her family contracting Covid-19 was the 3rd top topic by volume for the day.

The Health Minister’s tweet celebrating healthcare workers was the 4th top topic by volume for the day, with a burst of 82%.

South African citizens, companies and celebrities have banded together to raise funds to fight Covid-19.

The South African Cricketers’ Association announced that professional cricketers would donate R300,000 to the Gift of the Givers Foundation to assist with distributing food parcels to communities.

DJ and actress Thato Thabethe held a livestream concert on Saturday evening to raise funds for her feeding scheme.

DJ Black Coffee hosted the finale of his Home Brewed series on Saturday to raise funds for @FoodForwardSA. At one point, over 5,300 viewers had tuned in.

@SibaMazwai’s tweet: “My whole family tested positive for Covid-19 (including me)” has garnered over 20,000 likes as South Africans shared messages of support and solidarity.

Many asked about the symptoms and others shared their own experiences around overcoming Covid-19.

Nursing staff at Karl Bremer Hospital in Bellville, Cape Town, celebrate themselves and their hard work in fighting #COVID19. “We salute you.”

The video showing healthcare workers at the hospital dancing and putting on their PPE has been viewed over 51,000 times.

A news report by @News24 around the phased approach of lockdown easing was the top post by reach and 6th by impact.

The 2nd biggest topic of the day by volume was “President”. A post by the Presidency about a PCC meeting was 2nd by reach and 7th by impact.

@PresidencyZA’s 10.31am tweet about a meeting of the President’s Coordinating Council to consider moving most of the country to Covid-19 alert Level 3 was one of the top posts by impact and reach for the day.

According to the presidency’s website, the meeting was co-chaired by the president and Deputy President David Mabuza, and included ministers, premiers and SALGA. The meeting discussed measures to combat the spread of the Covid-19 pandemic. The meeting followed  consultation between government and social partners under the auspices of the National Economic Development and Labour Council.

The top post by reach was a @News24 report: “The government’s phased exit from the lockdown is nonsensical and unscientific, says one of the top scientists advising it”.

The report referred to Dr Glenda Gray, a member of the Ministerial Advisory Committee and chairperson of the South African Medical Research Council, saying in an exclusive interview that the month-to-month phasing-out of the lockdown had no basis in science, and many lockdown regulations were seemingly arbitrary.

Acting Director-General of health Dr Anban Pillay slammed Dr Gray for going to the media instead of addressing her concerns with the government directly.

The president’s PCC meeting triggered a debate around whether some provinces should be allowed to enter level 3.

A recent report that 91% of the new cases in South Africa were from the Western Cape and Eastern Cape has social media users concerned.

Many are wondering whether the move to level 3 amid such alarming statistics from the WC were driven by economic considerations. One user warned: “the capitalists win and workers have death coming their way as overcrowded trains, buses and taxis will ferry them to the slaughter house called the workplaces”.

Many still argue that the disproportionately high cases in the Western Cape is due to more extensive testing here than in other provinces.

A post by @Lesufi using the hashtag #AlcoholFreeSA was 9th by impact and the 3rd biggest post by reach.

The 8th post by reach was a @News24 article about illicit alcohol sales.

A post by @BlessingsRamoba questioning the revenue loss from the illicit cigarette trade was 10th by reach.

The increase in conversation followed a University of Cape Town study which concluded that the ban on tobacco sales had failed and served to bolster the illicit trade.

Screenshots of the research were shared to present various points about the ineffectiveness of the ban. A few threads gained moderate volume, but the conversation was not consolidated.

Conversations about alcohol focus on how people are paying significantly higher prices for the same products.

The alcohol conversation spiked between 7pm and 8pm, assisted by a News24 article on the alcohol ban.

This recurring theme of conversation was re-ignited after an interview by Madagascan President Andry Rajoelina.

The topic Madagascar trended 8th by volume and 10th by impact, ending the day on a burst of 66%.

The 6th story by reach was by CNN Africa: “Africans turn to herbal tonic”.

Madagascar has formally left the World Health Organisation over differences in opinion. Rajoelina has also urged other African leaders to leave the WHO.

In further African resistance to the WHO, Burundi expelled WHO member Dr Matshidiso Moeti from the country in the lead up to the planned elections on 20 May.

This follows a statement from Madagascar’s president questioning whether there would have been as much scrutiny if a European country had “discovered” the mixture.

Many related articles by African publications have been produced and shared.

Claims by Rajoelina that WHO had offered a “$20m bribe to poison” Covid Organics flamed this conversation further.

Madagascar is now producing Covid Organics “whether WHO likes it or not”, and has started donating and distributing it to other African countries.

The first shipment was sent to Equatorial Guinea, and their president distributed some of it to Burundi.

Other African countries have also received shipments, including Tanzania, Guinea-Bissau, DR Congo and Chad. Niger has imported the Madagascan recipe to produce the mixture in higher volumes locally.

Overall, this narrative occupied about 1.5% of the total Covid-19 conversation.

Mental health-related posts contributed to the top trending topics of the day.

Sygnia CEO Magda Wierzycka tweeted: “At this stage of the lockdown the mental health of South Africans needs more attention. I am exposed to more and more depression, anxiety, pessimism about the future of SA and children having problems by not seeing friends.”

South African media specialist Tim Modise also questioned whether people were psychologically preparing “for the ‘shocks’ that we are told lie ahead?”.

Australian Psychologist Glen Hosking stated: “Uncertainty amid the Covid-19 pandemic has caused an increase in depression and anxiety.” DM

The Centre for Analytics and Behavioural Change (CABC) is a non-profit organisation incubated at the Graduate School of Business at the University of Cape Town. The CABC stimulates positive social change through engagement, dialogue and advocacy.