Some lessons on dealing with Covid-19 from Masiphumelele 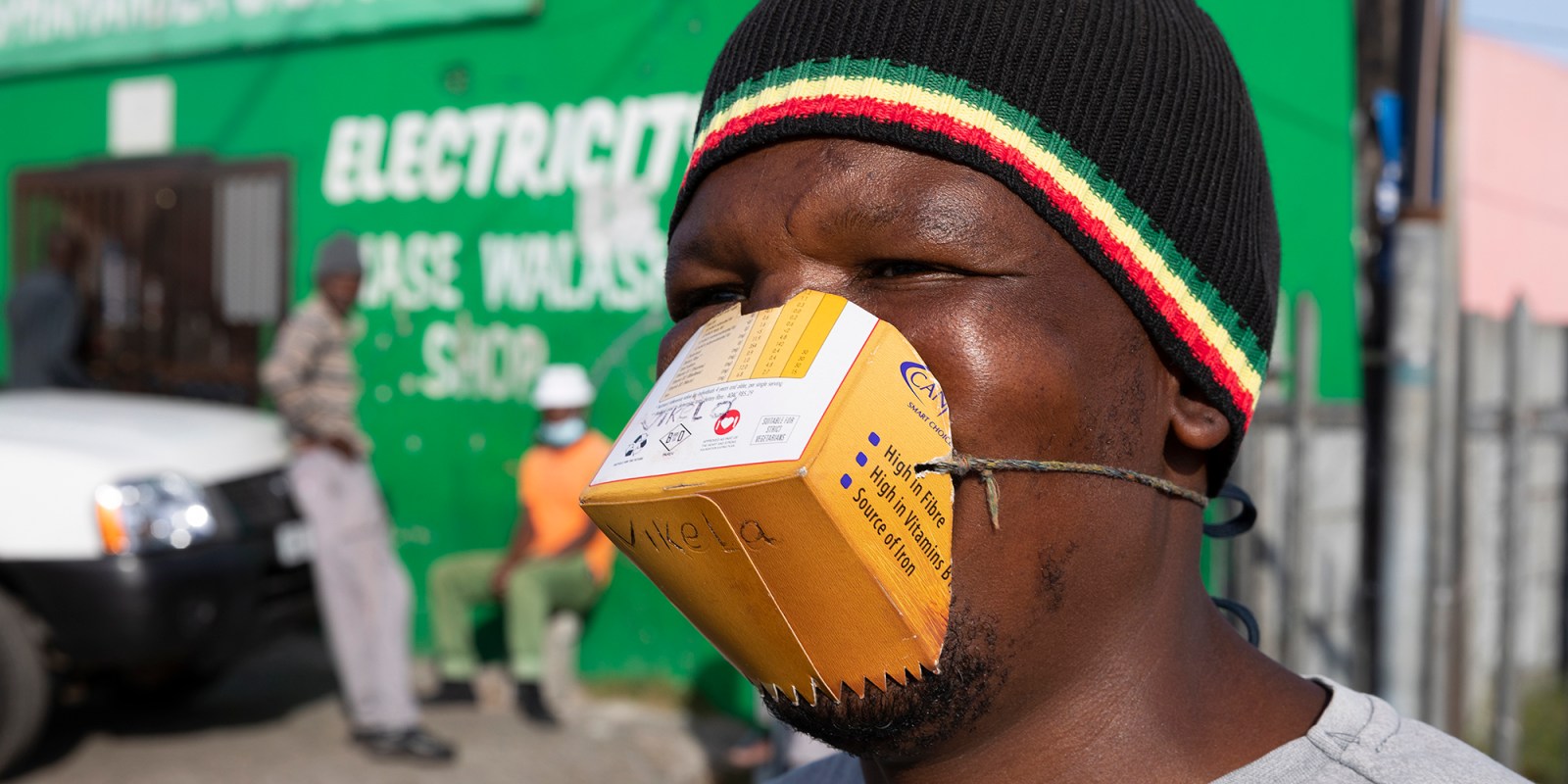 A man in Masiphumelele informal settlement, Cape Town, wears a mask made from a cardboard box. (Photo: EPA-EFE / Nic Bothma)

We need an end to secrecy and the best possible information from and consultation with all those working and living in poor communities.

As in most other townships, the first round of Covid-19 screening in Masiphumelele, one of the smaller communities with a population of about 40,000 (but one of the most densely populated south of the Mother City), began in late April

Local NGOs, community leaders and residents were most co-operative – but where are we now, more than three weeks later?

At present, there are more rumours than ever: How many are infected? How many are sick? Are those tested positive quarantined – but where and how?

Rumours are always bad as they allow all kinds of “non-experts” to voice their sensational stories. And they create uncertainty among those who have followed all the given rules, from hand washing to sanitising — and even tried social distancing, although this is extremely difficult under township conditions where too many people share only a few water taps, toilets and tiny living spaces in shacks.

The recent messages from President Cyril Ramaphosa and Health Minister Zweli Mkhize have been as confusing and contradictory as their first messages on the crisis were strong and convincing.

Masi NGOs such as Living Hope or Masicorp, working for decades in Masi and having employed numbers of Masi residents, have chosen a consultative approach from day one: Regular meetings with community leaders and close co-operation with our most important health facilities such as Masiphumelele Clinic and False Bay Hospital.

But also they are still left in the dark. Pastor John Thomas of Living Hope:

“We have been part of all the screening and have walked with people to the testing site at the Masi Community hall — and even we have no idea of the results!”

One of the nurses, part of the screening team in Masi, was Chantal Benade from neighbouring Fish Hoek, who generously offered her time as a volunteer to support the department’s efforts, putting herself on the frontline:

What happened to these 18?

“They were referred to the Department of Health.”

“I am not sure – but I am confident that by now the positive cases are beyond 50, as more testing also continued at False Bay Hospital.”

While numbers from Khayelitsha have by now hit more than 1,000 positive-tested residents, in other densely populated townships such as Dunoon, similar numbers as the one estimated from Masi were published by ward councillor Lubabalo Makeleni on 15 May: Out of 8,816 screened residents, 77 people had been tested positive.

The Dunoon community was shortly afterwards shocked by statements by government officials that there are plans “to move thousands of residents to other sites in order to de-densify this overcrowded community”.

Another challenge in Masi on the testing process was that some results were delayed by more than 10 days and lost medical significance as the person had recovered from all symptoms by then. To put all positive-tested people in hospital beds does not make much sense, as the “big storm” is still coming and we will need all beds available for patients who really need treatment.

What we need now is an end to secrecy and the best possible information and consultation with all those working and living in these communities. No one questions that sustainable behaviour change is the key to all long-term solutions.

If we compare today to the time of the HIV/Aids crisis in South Africa many years ago, there is one clear advantage: Government, NGOs and community are on the same page. No one will deny access to Covid-19 medication, once available, as was the case under President Thabo Mbeki.

Even better: When asked personally for a detailed breakdown around Covid-19 cases in all communities, the head of the Western Cape Health Department, Dr Keith Cloete, responded in no time:

“These granular details will be released on Monday, 18 May, which includes breakdown to the community levels you require.” He fairly added:

“There are still two challenges: (a) the total new daily numbers of positive cases are large, (b) the entered addresses on each lab form are challenging, which influence the ability to provide accurate daily updates.“

As Dunoon residents must be consulted first about any plans of de-densification, all citizens in the Western Cape should be much better informed on options to self-isolate or be quarantined in order to alleviate fears and allow co-operation. Everybody needs to know in detail where these quarantine sites are and how they will operate. Indeed, the “big storm” is only expected in the harsh winter months to come.

The present discussion to break down provinces into different levels of easing the lockdown has some dangerous implications as far as divides between poor and wealthier communities are concerned — those who can self-isolate and those who can’t.

Most important for the time being is what Dr Wendy Waddington, manager of False Bay Hospital, herself residing in Fish Hoek, emphasises, and what applies all communities:

“We all must adhere to the basic rules of hygiene and sanitation. We must support those who do not have sufficient access to such at all times.”

“We have a significant number of staff from Masi. I am treating all my staff as superheroes. At present, the department is awaiting more PPE stock and we do need urgently donations to provide each staff member with two sets of surgical scrubs. This will help to build morale and to protect themselves and their families from the risk of virus transmissions. A new unit has been installed to enable us to test and treat larger numbers of patients. We are hopeful that we will be supplied with additional staff as the need arises.”

Please, those who can, keep supporting NGOs such as Living Hope and Masicorp and False Bay Hospital Trust (please Google all banking details via their websites).

We are all in this together. We must be stronger than the “storm” still to come. DM

Dr Lutz van Dijk is a Dutch-German writer, historian and human rights activist. He was refused entry to South Africa until 1994. In 2001, he became a founding co-director of the HOKISA Children’s Home in Masiphumelele (www.hokisa.co.za). His book, A History of Africa, (preface by Archbishop Desmond Tutu) is told exclusively with African voices. His novel, Themba, was made into an international movie in 2010.