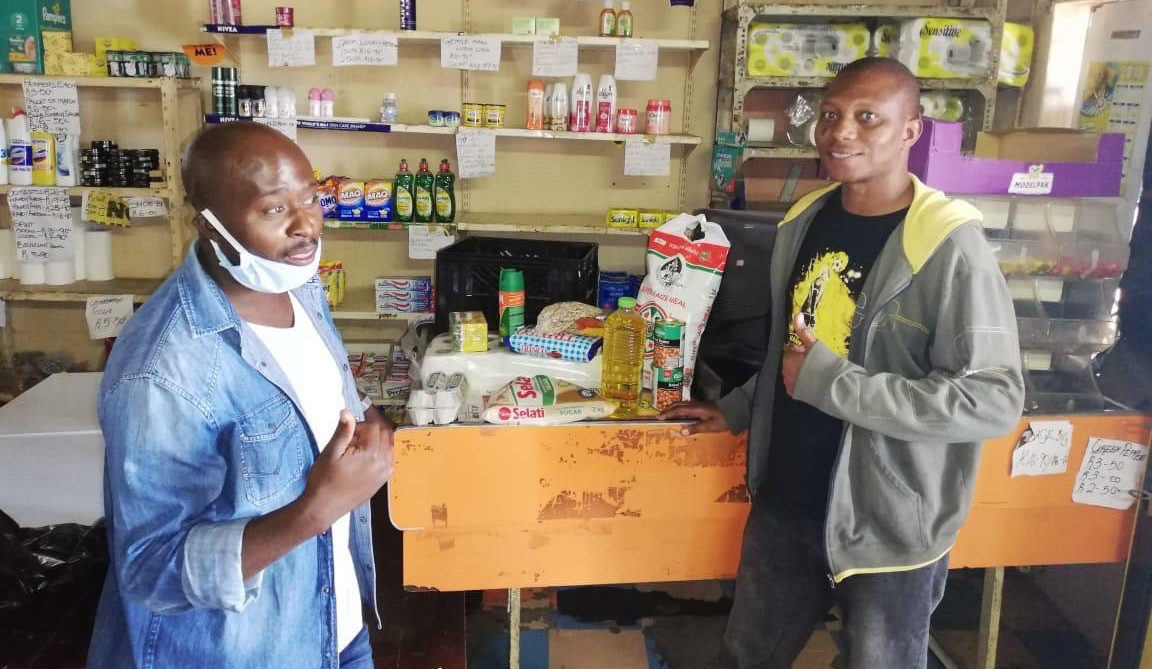 Phumlani Mncube, M4Jam Master Jobber (left) with the recipient of the spaza food parcel, who asked not to be named. (Photo: supplied)

Gig economy company M4Jam has pivoted in a way only a modern tech company can, shining a small light on how distributing food hampers could be done fast and efficiently using existing technology and supply chains.

One of the most famous Charles Darwin misquotes is: “It’s not the strongest of the species that survives, nor the most intelligent; it is the one most adaptable to change.” Actually, the quote was an interpretation (wrong as it happens), of Darwin’s theory by a business professor named Leon C. Megginson. Unsurprisingly, Meggison’s quote is much more appropriate to business than to the notions of natural selection, and never more so than during the Covid-19 era.

A good example of adaptability is the “Uber for jobs” company M4Jam, which has mutated its jobs app to become a food hamper distributor, raising some tricky questions about whether it is sailing too close to the regulatory wind or not.

How this happened is one of those fascinating stories of change and adaptation that are integral to business development. M4Jam, or Money4Jam, as it was originally, began as a Naspers-owned app which was started as a way to connect job-seekers with micro-jobs, M4Jam marketing head Angela McCann relates.

The idea was deliciously desirable and laudable: it would connect work-seekers and people who needed micro jobs done in the same way Uber connects travellers with drivers. But somehow the app never took off, so the then managers tried to turn it into a mobile wallet company.

Only six months after making its biggest acquisition to facilitate this change, Naspers gave up in 2018, saying because it has been unable to achieve profitability within the investment time frame, the board decided to cease trading and sell the assets to interested parties.

McCann says the existing management and the DNI Group, a telco wholesale equipment provider, bought the bare bones of M4Jam at this point and have been persevering broadly along the lines of the original business plan, with adaptations which include using the digital wallet function they got in the acquisition process.

It has around 300,000 registered users, who do everything from answer questionnaires to online training, and the company has about 40 staffers. It currently breaks even.

One thing the new managers did do was to try to get a handle on all spaza shops in SA, inviting them to participate in a data-collection exercise, facilitated partly by their own “jobbers”. The project was to physically map 100,000 spazas, geo-locate them, profile the store and survey their operations.

That project was underway, but not completed when the Covid-19 lockdown happened – which required some quick Darwinian adaptation. They did manage to map 20,000 spaza shops over the past three months before the lockdown.

McCann says many of the spaza shops were struggling because the customer’s cash dried up very quickly, so they conceived this idea to help both spaza shops and township residents by paying spaza owners for food packages funded by a charity and identifying needy recipients to take delivery.

The biggest funder of the food parcels so far is Cell-C who is also a client of the DNI Group. Local NGOs help identify the neediest recipients, who are given an OTP code and the location of the nearest spaza. Once the code is used, the spaza is paid via M4Jam’s wallet which is redeemable at supermarkets like Shoprite.

The cost of hampers to the donors is R400, the cost of contents of the hampers is just on R300, leaving R40 for the platform and R60 for VAT. So far, they have facilitated about 850 hampers to around 300 people, paying out R250,000, which compared to the requirements of SA is the tiniest of drops in the ocean.

But what is instructive about the effort is how technology could be mobilised to facilitate the food parcel process, instead of being locked up in the political process.

This is also the tricky part for M4Jam because technically, the provision of food parcels cannot be done without a permit supplied by the Department of Social Development and “clear details of what is being distributed, when, and to whom, must be provided to the municipality for sharing with the security cluster”. The system – and problems with it – was recorded by Daily Maverick here.

But M4Jam says it is not “technically” distributing the baskets, but essentially distributing vouchers. Consequently, they do not require any permits from government and the company does not transport any food/essentials. “We merely use what is already available at spaza stores.”

“This solution is providing a way for us to mitigate the chaos of hamper distribution at the moment and also allows for physical distancing upon collection,” it says.

“We have built a unique disbursement model for these baskets by leveraging off the existing infrastructure and procurement processes of the informal trade. By partnering with spazas, we can localise the disbursement of baskets to the people that need them the most. The value of this model is that it directs the majority of investment into the food itself and not into the supply chain to allocate these baskets.

McCann says the company is able to roll out to different communities within a matter of days and it is constrained only by the level of donations. The company is contactable via its website www.m4jam.com DM/BM