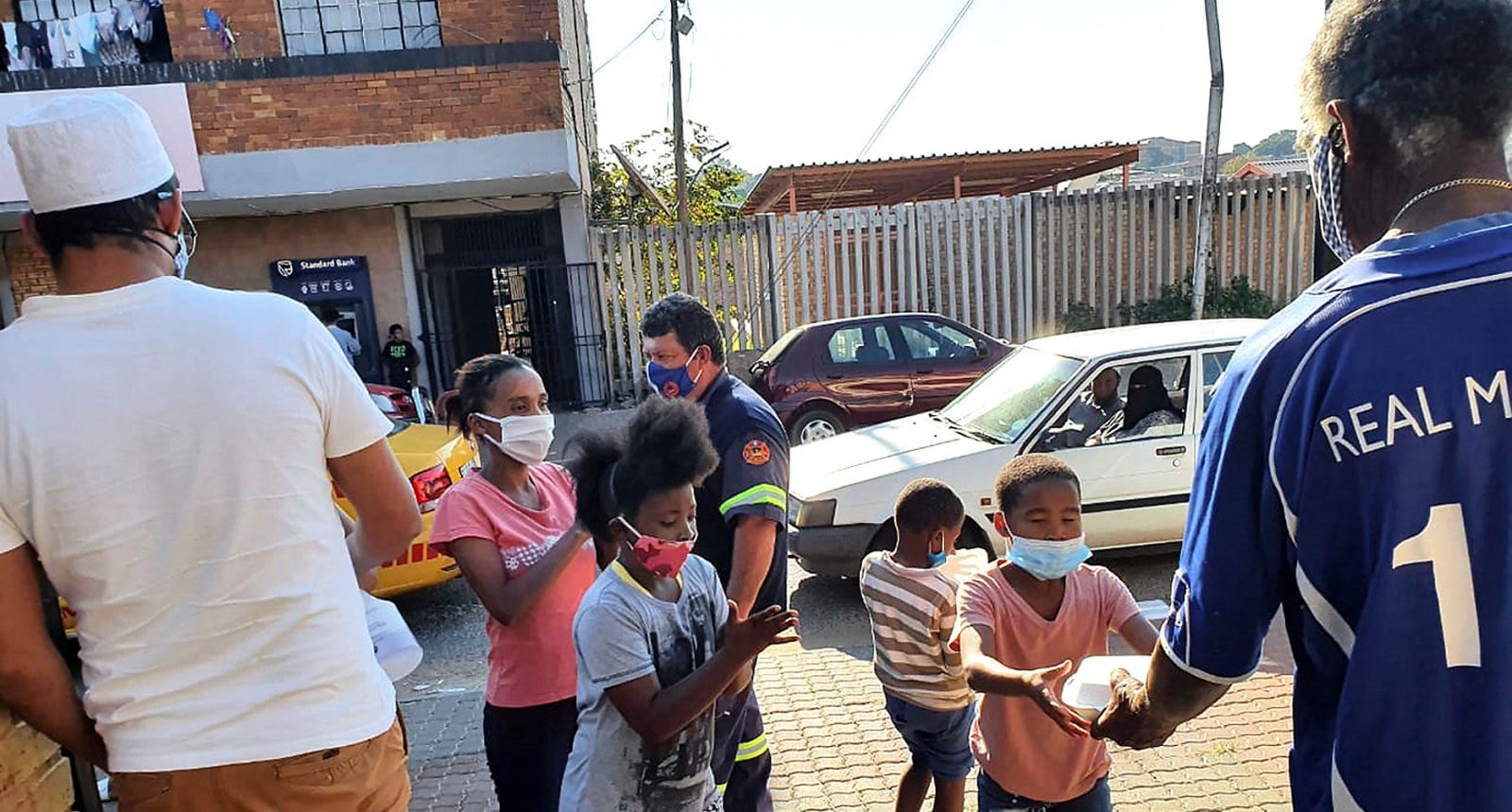 Maskeen Humanitarian Feeding Scheme is a father and son-run project based in Newclare, a predominantly coloured neighbourhood in Johannesburg. Twenty-seven-year-old Yaseen Jardine, a customer services consultant at a mobile company, runs the feeding scheme and his father, 56-old-Ashraf Jardine, is a retired teacher who takes care of the cooking.

Yaseen tells me that the family has always had an open-door policy to assisting those in need of food and tracks it as far back as to his grandparents. Four years ago he and his father decided to formalise their feeding of the community and registered as a non-profit organisation called Maskeen Humanitarian Feeding Scheme. This was as a result of the escalating number of people asking for food which grew from about 10 people to now feeding between 250 to 300 people.

The operation is wholly run from their own pockets as well as the occasional donation from family and some community members able to spare what little they have. The pair say that they open their gates for the community to come and get food every Thursday at 3pm. The reasoning behind the 3pm time slot is so that it is at a time of day that will tide people over into dinner and for most this is their only meal of the day. The food served is a filling plate of rice and beef curry or chicken. However, as it is now the month of Ramadaan (the month of fasting in the muslim faith) it will be rice and dahl and people are given food daily.

The majority of people that come to receive food are young children from the age of six months. The situation has become particularly exacerbated at this time because the school feeding scheme has now closed down as a result of the Covid-19 pandemic and children no longer get their meals for the day.

Yaseen tells me that when lockdown first started they had to shut down for a week as officials told them they needed a permit in order to operate, leaving people without food during that time. They obtained the permit and were able to re-open under strict monitoring to ensure they had the necessary sanitisers, people observed social distancing and wore masks while queuing for food. However, because people are so poor some are unable to buy masks which presents a problem.

He says the majority of people actually do not understand what Covid-19 is and the children who are able to wear masks wear them because “they think it’s a style and like the emblems on them like the Nike tick”. He says that the issue of people having access to water to wash hands and sanitise is laughable because most people do not even have geysers because they have sold them to get money for more drugs or alcohol.

However the Jardines say that they are not satisfied with simply handing out food to people, they would like to “teach people to fish”. They say it is a much more sustainable way for people to be able to look after themselves instead of relying on hand-outs and are looking to expand in order to teach people basic work skills in order for them to go out and find jobs to feed themselves. Ashraf says they currently have two guys helping them with their feeding scheme who are drug addicts. They say that despite this, having a job gives them a sense of purpose and they are learning some skills that they could potentially use in the outside world. They both visibly light up when they talk about their vision to expand into a community skills centre open to everyone looking for a way out of the desperation and poverty of their neighbourhood. Ashraf gets particularly animated as he talks about his passion for furniture design, a skill that he says he could pass on, were they to have the resources needed.

Asked if they have been approached by the Department of Social Development (DSD) to assist with the handing out of food parcels and they say no. This seems a pity considering the footprint they have in the community and the sluggish progress of the DSD’s distribution during lockdown. They say that the few food parcels that they know of being allocated by the DSD, were distributed according to political party loyalties by the local councillor.

When it comes to government intervention they say the neighbourhood does not receive adequate assistance, in fact, Ashraf says “I think the government wants us to live like this”.

The Jardines are determined to help their community in any way they can and are a beacon of hope as South Africa navigates its hunger crisis. DM/MC