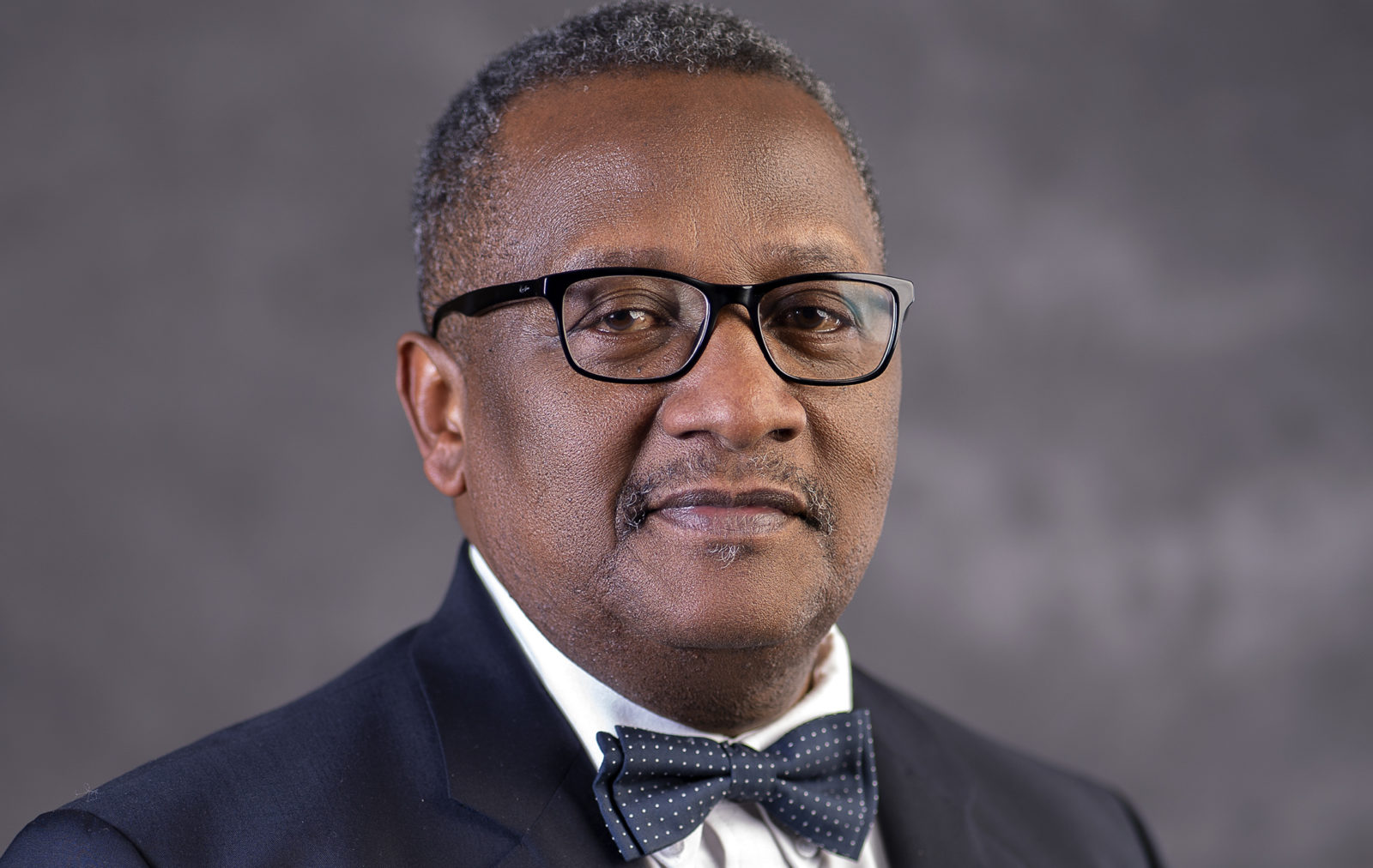 As a young adult, Clarence ‘Bizzah’ Mini jumped the border to join umKhonto weSizwe, trained with the June 16th Detachment in Angola and survived ‘the Boers’; in exile, he was trained and qualified as a doctor; in early middle age, he returned to South Africa just as the Aids epidemic was taking hold, became an Aids activist and worked tirelessly against HIV, which killed three million of his compatriots over the following two decades. But this week, Dr Clarence Mini, was eventually felled by Covid-19, a coronavirus nobody had drawn up battle plans for.

Since the news of the passing of Dr Clarence Mini filtered through on 11 May 2020, there have been many heartfelt tributes. He has been saluted by the ANC and by professional bodies such as the Council for Medical Schemes (CMS), of which he was the Board Chairperson at the time of his death. His fellow health veterans, men and women who have grown old in a shared struggle for quality and equitable healthcare, described him as a “beautiful soul”, “a large personality”, “so kind to everyone”, “a huge loss to the industry and the country”.

Over the last decade or so, Dr Mini is remembered mainly for his work in relation to private health and the medical schemes industry at bodies like the Government Employees’ Medical Scheme (GEMS) and the Board of Healthcare Funders (BHF). However, one aspect of his career that is not being sufficiently remembered and reflected on is his leading role in the struggle for HIV prevention and treatment.

It was here that I got to know him and many health activists feel that it is here that he was truly a pioneer. It is important that it not be forgotten.

In the early 1990s, when Mini returned from exile, now as a doctor, he immediately became involved in the then still-nascent struggle to coordinate a coherent national response to the emerging epidemic of HIV and Aids. Together with Edwin Cameron, then the head of the Aids Law Project (ALP) at Wits University, he co-chaired the first national gathering of Aids organisations, activists and specialists held at NASREC in August 1992.

Today, with three decades of the Aids pandemic behind us, it is easy to forget how important and brave that was.

In those days, there was a deep reluctance to talk about HIV in the ANC. It took pioneers and mavericks like Chris Hani and Mini to draw attention to the likely impact HIV would have on our country, if not contested. In the midst of the violent transition to democracy, there also seemed to be much more pressing political matters for the ANC to address. After the apartheid government was suspected of orchestrating the Boipatong massacre in June 1992, the ANC brought the negotiations to a standstill. Yet despite this, Nelson Mandela opened that meeting, marking his first major intervention on Aids policy.

In the years that followed, Mini went on to co-chair with Cameron the National Aids Convention of South Africa (NACOSA), the government-supported national Aids coordinating structure that emerged from the NASREC meeting.

This week, Cameron recalled how it was, “Under NACOSA’s aegis, progressive doctors and healthcare workers together with Aids activists, in alliance with ANC health specialists returning from exile, including doctors Nkosazana Dlamini Zuma and Manto Tshabalala-Msimang, helped draft a progressive and ambitious national policy on Aids, which the new democratic government adopted in August 1994.”

However, according to Cameron, “Dr Mini’s moment of outspoken courage was waiting for him.”

The democratic government’s first scandal was in Aids. Mbongeni Ngema, a playwright well-connected to Dr Dlamini Zuma and other leading ANC figures, was awarded the then-massive sum of R12-million to produce Sarafina, as an Aids-awareness production. Ngema was credibly accused of pocketing the largest portion of this amount, even constructing a sound studio at his private home.

When the scandal broke, Mini and Cameron, as NACOSA co-chairs, spoke out strongly and publicly.  Cameron remembers how “This elicited Dr Dlamini Zuma’s extreme displeasure”, and that they were both “summoned to a meeting with her at OR Tambo Airport”.

There, she rebuked them sharply for their public condemnation of the irresponsible squandering of precious Aids funds, “accusing us of disloyalty to her and to the new democratic government”.

However, neither Mini nor Cameron backed down, and told Dr Dlamini Zuma so. At roughly the same time, Mini and Cameron were trying by every means to get a high-level meeting with then-President Mandela on the new government’s Aids priorities. The late Professor Jakes Gerwel in Mandela’s office referred the meeting to then Deputy President de Klerk, whom Mini and Cameron met at the Union Buildings in November 1994.

But, says Cameron, “Dr Mini had an ace up his sleeve”.

He knew then-Deputy President Mbeki from exile, and urged him to join the meeting. Mbeki unexpectedly did, strolling into the meeting with De Klerk near its conclusion.  This encounter, which predated Mbeki’s disastrous flirtation with the toxic hoax “treatment”, Virodene, punted by University of Pretoria researchers, was perhaps Mbeki’s first formal engagement on Aids.

At that time and in the years that followed, according to Dr Quarriasha Abdool Karim, appointed the first head of the new government’s HIV/Aids directorate, “Clarence was key to shaping the South African Aids response, including establishing and leading NACOSA for many years … I recall my weekly meetings with him and Edwin when I was National Director of the Aids programme.”

It was also evidence of Mini’s integrity that, despite his loyalty to the ANC and the sacrifices he had made in exile, he never succumbed to the Aids denialism that consumed President Mbeki from 1999 onwards and which was greeted with a timid silence by the vast majority of Mini’s comrades in the leadership of the ANC.

Instead, Mini allied himself to science and the rights of people living with HIV. Shaun Mellors, one of the first activists to live openly with HIV in South Africa, recalls working with Mini at the International Aids Conference held in Durban in July 2000, a conference that was cast in controversy by the South African government position on HIV, and included Mbeki’s leaving the closing ceremony immediately before the speech of little Nkosi Johnson.

Mellors recalls: “I had the opportunity of working with Clarence when he and (the late activist) Peter Busse were community co-chairs of Aids2000. I was working as the community coordinator. It was in many ways a challenging conference, but Clarence contributed a calmness and determination to avoid the petty politics and focus on the bigger picture – making sure that the conference was a success and ensuring that it positioned South Africa well.”

Mellors adds that Mini: “Was very supportive of what we called ‘the Aids2000 development project’, which also organised the national conference for people living with HIV, prior to Aids2000, as he was supportive of a collective SA positive voice at the conference.”

It is this independence, personal ethic and principle – even when tested by his political loyalties – for which we should celebrate and remember Mini.

And thus, we give the closing words to Vusi Pikoli, another activist from the Eastern Cape who also stood his ground and risked his career to defend the principles of human rights, equality and social justice, which had led him into exile in the first place. This week, Pikoli said this of Mini:

“Bra Bizzah wrote the final chapter of his life before he was struck down by the deadly invisible enemy of humanity. His story (history) will describe him as a gentle freedom fighter with a naughty smile. A lover of peace who was prepared to go to war for peace. A dedicated husband to Nancy, a loving father, a caring brother and a committed comrade for social justice.

“He enjoyed an intellectually stimulating engagement and did not suffer fools. Bra Bizzah did what he had to do until he could do it no more. He was taught in training that the spear must never touch the ground. His spear has not touched the ground, but has touched so many a heart. The gentle freedom fighter with a naughty smile is no more.