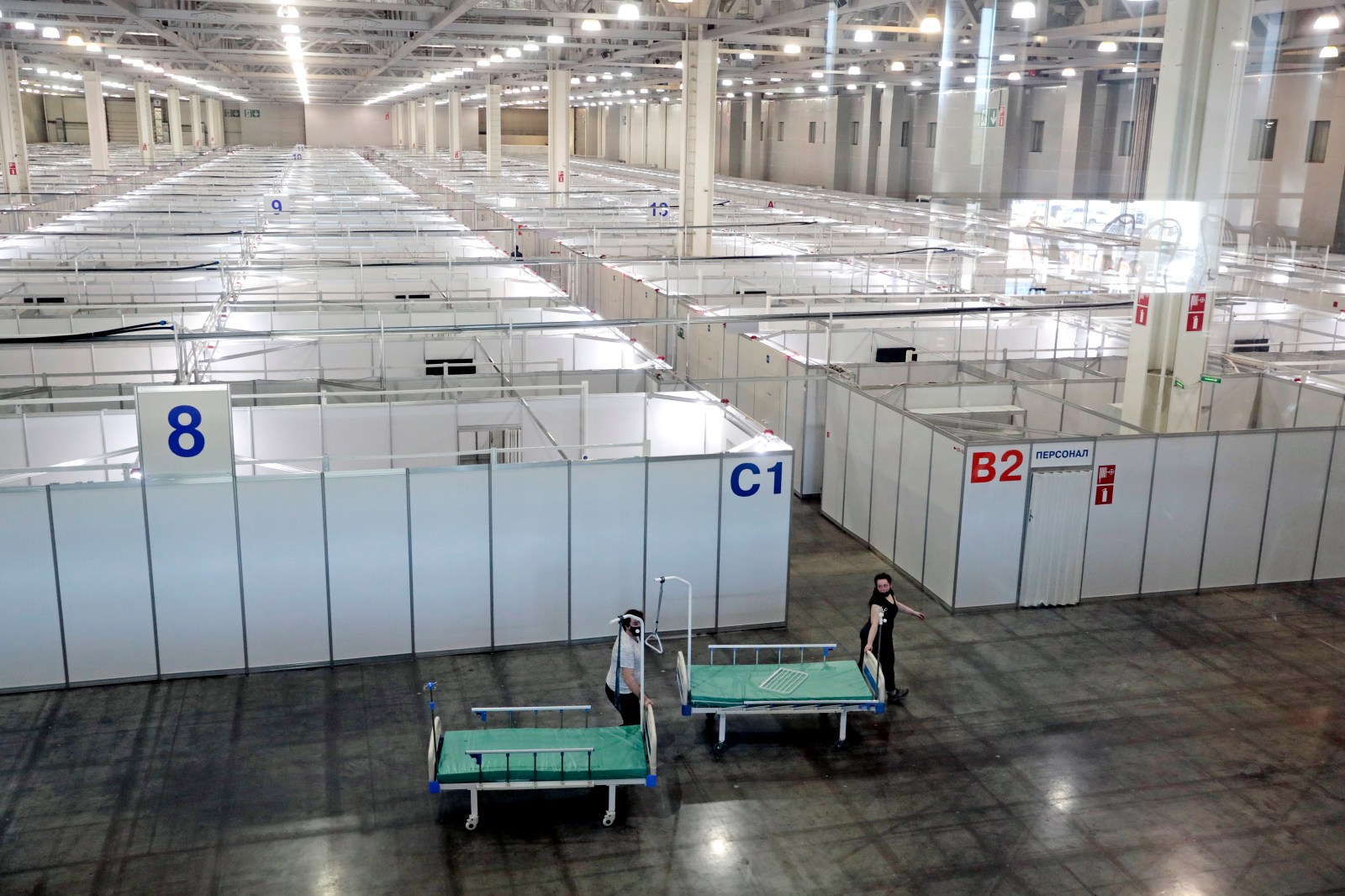 epa08415005 Personnel move beds to compartments at the temporary hospital for COVID-19 patients at the Crocus City exhibition center in Moscow, Russia, 11 May 2020. A new hospital with a capacity of up to 1,000 patients infected with the SARS-CoV-2 coronavirus has been set up and deployed at the exhibition center and is expected to receiving first patients on 12 May 2020. EPA-EFE/SERGEI CHIRIKOV

GENEVA, May 12 (Reuters) - The World Health Organization said on Tuesday that some treatments appear to be limiting the severity or length of the COVID-19 disease and that it was focusing on learning more about four or five of the most promising ones.

The Geneva-based WHO is leading a global initiative to develop safe and effective vaccines, tests and drugs to prevent, diagnose and treat COVID-19. The respiratory illness has infected 4.19 million people around the world, according to a Reuters tally.

“We do have some treatments that seem to be in very early studies limiting the severity or the length of the illness but we do not have anything that can kill or stop the virus,” spokeswoman Margaret Harris told a briefing, referring to the body’s so-called Solidarity Trial of drugs against the disease.

“We do have potentially positive data coming out but we need to see more data to be 100% confident that we can say this treatment over that one,” she added, saying more research was needed and planned.

Clinical data released last month on remdesivir raised hopes it might be an effective treatment. Several studies looking at combinations of antiviral medicines have also suggested they may help patients fight off the virus.

Results of a trial in Hong Kong released this month showed a triple drug combination of antiviral medicines helped relieve symptoms in patients with mild to moderate COVID-19 infection and swiftly reduced the amount of virus in their bodies.

The trial, which involved 127 patients, compared those given the combination drug, made up of the HIV medicine lopinavir-ritonavir, the hepatitis drug ribavirin, and the multiple sclerosis treatment interferon beta, with a control group given just the HIV drug.

A malaria treatment championed by U.S. President Donald Trump as a “game changer” in the fight against the coronavirus again failed to show a benefit in patients hospitalised with COVID-19, a study this month found.

While the study had certain limitations, doctors reported that the use of hydroxycholoquine neither lessened the need for patients requiring breathing assistance nor the risk of death.

In Geneva, the WHO official sounded a note of caution around expectations for a vaccine, saying coronaviruses in general are “very tricky viruses” that are “difficult to produce vaccines against”.

More than 100 potential COVID-19 vaccines are being developed, including several in clinical trials. The WHO said in April a vaccine would take at least 12 months.

Harris said that the Americas were the current “centre” of the pandemic, although she also noted rising cases in Africa. However, she said the continent had a “big advantage” over other countries with little experience of infectious disease outbreaks.

“They often have very good contact tracing infrastructure and a deep, deep, deep memory and understanding of why we take a new pathogen very, very seriously,” she said, singling out South Africa for its effective testing and contact tracing.

Asked about the reasons for high case loads in the United States and Brazil, Harris said: “Around the world we have seen that the warnings we put out right from the start, very, very early on, were not seen as warnings about a very serious, lethal disease.”

She restated that the WHO, which has come under criticism especially from the United States for its handling of the pandemic, would conduct an “after-action” review that would include a “free and frank” discussion on its performance.

U.S. President Donald Trump is working to reopen the economy quickly against recommendations from health experts to move cautiously to avoid a resurgence of the virus that has so far killed more than 80,000 people in the United States, the highest death toll in the world. He said he acted early to prevent the spread of the disease.

Brazil has registered a total of 168,331 confirmed cases of the virus and 11,519 deaths, the most deadly outbreak in an emerging market nation.