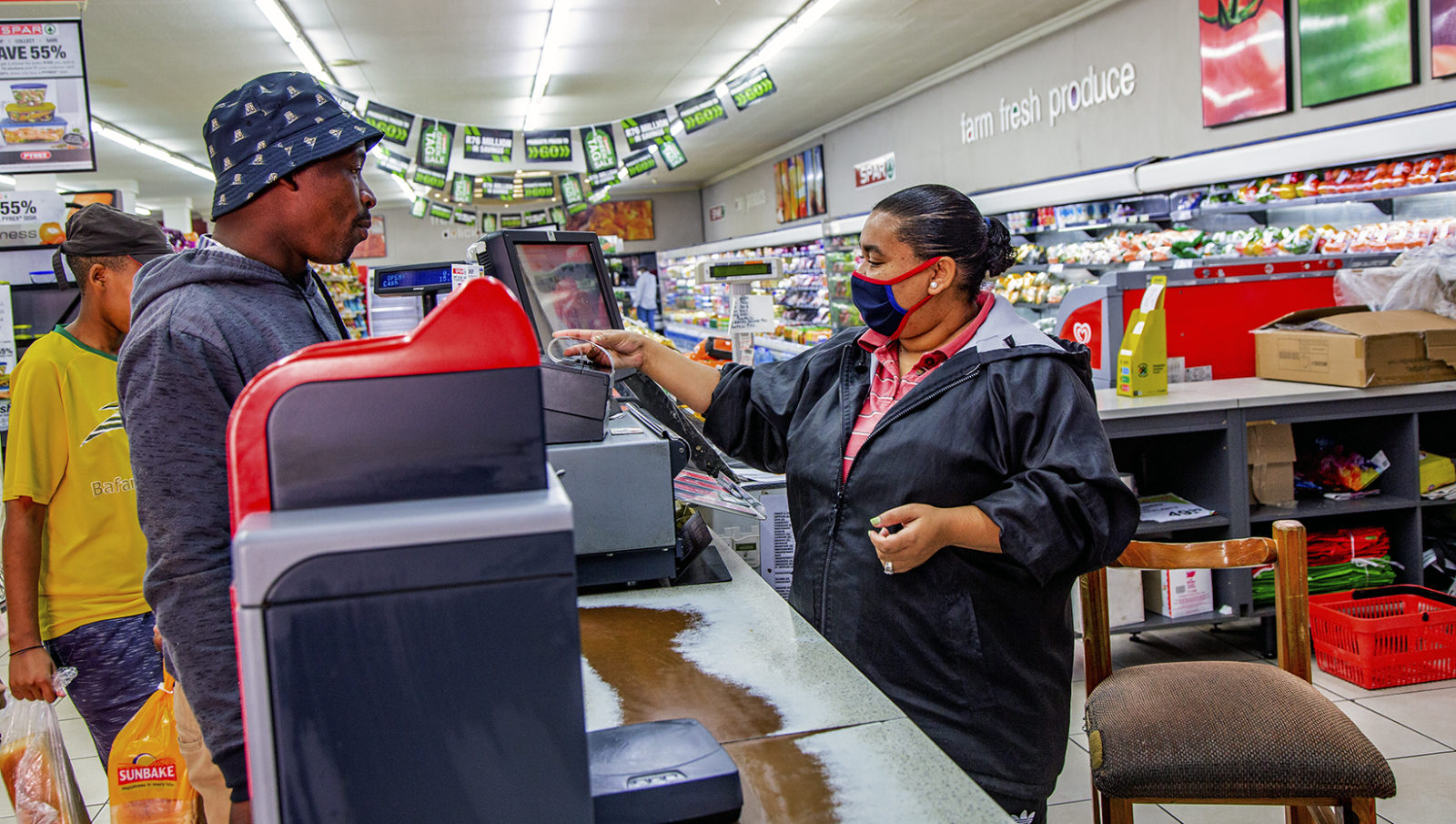 A growing number of retail stores have been forced to temporarily close after frontline staff tested positive for Covid-19. This has led to questions around these store’s pay policies, access to the UIF Temporary Employee/Employer Relief Scheme salary assistance and the financial and physical wellbeing of employees affected by the outbreak.

Dozens of supermarkets and outlets including Clicks, Dis-Chem, Woolworths, Spar, Food Lovers Market, Shoprite/Checkers and Pick n Pay have had to temporarily close their doors due to staff being exposed to, or testing positive for, Covid-19.

The Shoprite Group, which includes supermarket retailers Shoprite, Usave, Checkers and Checkers Hyper has had to close several of its stores. In total, the Shoprite Group has 2,007 stores in South Africa. The group would not disclose the exact number of stores that had to close, but at least 17 stores in the Western Cape closed last week and another 6 stores closed on 11 May 2020.

Woolworths’ head of corporate communications Kirsten Hewett says that a total of 17 stores (out of over 600) have had to close, with 11 in the Western Cape, three in Gauteng, two in KwaZulu-Natal, and one in the Eastern Cape. Closures were “due to either an employee or service provider testing positive for Covid-19”, or a customer who has the virus going into the stores, says Hewett.

SPAR group risk and sustainability executive Kevin O’Brien confirms that 18 of its stores have been affected by the virus, with eight in the Western Cape, four in KwaZulu-Natal, three in Gauteng, two in Mpumalanga, and one in the Eastern Cape. The group has 2,349 stores nationwide.

“Our swift action in isolating everyone who had been in contact with the affected staff members, strict 14-day self-quarantine periods, proactive testing of other staff, high levels of safety and health measures, and collaboration with authorities, have led to our stores being able to open again after their limited closures. The safety of staff and customers has remained our number one priority, which has led to such low incidences across our network of over 1,000 stores,” says O’Brien. whose comments mirrored those of other outlets.

Food Lovers Market has been fortunate, with only two of its 128 stores (Willowbridge and Access Park in the Western Cape), reporting positive cases of the virus.

Clicks has 704 stores nationwide and has only had a single store closure (in Ceres), says Clicks chief store operations officer Sedick Arendse.

According to the Pick n Pay media office, a small number of employees have tested positive for Covid-19. Pick n Pay has 1,647 stores across the country, but would not disclose the number of stores affected or closed.

Dis-Chem has over 160 stores nationwide and would also not disclose how many of their stores have been affected. Cary Eliasov-Barker, human resources director at Dis-Chem would only say that “we have had a number of stores which have closed, but we are not providing regional breakdowns”.

Under the lockdown regulations, business owners are required to provide staff with personal protective equipment (PPE), to manage the number of customers allowed in the store at any given time and to ensure that the work environment is regularly cleaned and sanitised.

When an employee tests positive for Covid-19 or has been exposed to someone with the virus, stores are required to immediately close their doors, and to report it to the National Institute of Communicable Diseases (NICD) and the Department of Health.

Stores are only reopened once a “deep clean” has been done in accordance with hygiene protocols. This process is also done in consultation with the Department of Health.

According to Shoprite Group spokesperson Sarita van Wyk, once an employee tests positive, the store is closed and an “employee screening programme supported by the company’s mobile clinic is immediately put into place”.

“A professional decontamination company is brought in to sanitise and deep clean the store and the store will reopen in consultation with the Provincial Department of Health.”

What happens to staff who cannot work?

“Each employee’s situation is individually considered based on their individual needs and the specific scenario, in short, in cases where there is confirmed positive Covid-19 testing, the full salary will be paid to the employee and the company will claim back a portion in terms of the COIDA regulations,” says Van Wyk.

The same leave policies apply to full-time and part-time employees. The group did not disclose further details on the company’s pay policy or leave policy.

Employees who work solely in the now-closed in-store coffee shops have been reassigned to other departments in order to ensure that they can continue to work.

“Where required, employees from in-store service departments (such as the coffee shops) that are not operational under current regulations, have been redeployed to other departments within Shoprite and Checkers stores, so remain in employ and remunerated accordingly,” says Van Wyk.

While staff rely on public transport, Van Wyk says “special arrangements [for transport] may be made where required and employees need to communicate this to their respective managers to be considered”.

Employees are only allowed to return to work once the quarantine period has run its course and once the store is fully satisfied that they have not contracted the virus.

Millson says that the company’s pay policy for employees who test positive “is based on the premise that we will endeavour, as much as we are able, to pay our staff fully during lockdown. This equally applies to individuals who have tested positive and are therefore obliged to stay at home.” Millson said they continue to pay their team and have paid them fully in April and May.

Millson adds that the company is working with the UIF Temporary Employee/Employer Relief Scheme (TERS) Covid-19 fund for salary assistance.

Food Lovers Market also arranges private transport to their homes for employees who have come into contact with an individual with the virus. Employees do, however, rely on public transport to get to work.

SPAR was not able to respond in full to all the questions posed, stating it had independently owned stores. All SPAR stores are independently owned and O’Brien says “decisions over pay, whether full-time or part-time, are made by individual owners. However, SPAR Group expects all owners to abide by all relevant labour and disaster management legislation as far as pay policies are concerned.” O’Brien did not say whether the head office was monitoring its stores on this score.

O’Brien adds that the group is aware of delayed UIF payments, but that SPAR “believes most of these issues have recently been resolved. Again, these issues are managed at store level by each individual owner, but SPAR Group will not countenance any breaches, if any, of the relevant labour and employment rules.”

Pick n Pay says in each instance where an employee has tested positive for Covid-19, “the colleague’s close contacts must be identified and self-quarantined for the requisite period. Staff who have not been in close contact are screened by a health practitioner as a precaution. Staff members will only return to work once clearance has been received from the NICD or the Department of Health. We have a rigorous cleaning regime and liaise closely with the health authorities prior to stores reopening.”

In cases where Pick n Pay liquor stores have had to close down because of lockdown regulations, the company says that staff have been temporarily transferred into their supermarkets “where possible”.

Woolworths says the health, safety and wellbeing of its employees are their utmost priority. “As a precautionary measure, in line with our procedures for these type of incidents, the store will be closed for extensive deep cleaning and all our people who were in contact with the employee will be placed in self-quarantine for 14 days,” says Hewett.

If any employee develops symptoms during the quarantine period, the Woolworths Covid-19 helpline will make all the necessary arrangements for testing.

Woolworths employees who are required to be in self-isolation receive their full salaries for the isolation period.

As per government regulation, Woolworths Cafes were forced to close, leaving some staff without work. However, Hewett says that applications for all staff working in the cafes, irrespective of nationality, were made to the UIF TERS Covid-19 fund for salary assistance.

“This application was done timeously, and funds were paid out on receipt as stipulated by the UIF Agreement. Staff received all salary and wages due to them for the days worked during the pay-cycle prior to the lockdown… Unfortunately, the Department of Labour’s UIF office only paid funds for South African nationals and provided no explanation to Woolworths for their non-payment of non-South African nationals,” says Hewett.

According to Hewett “all staff, however, received some form of compensation during the pay period. Queries were directed to the Department of Labour regarding the non-payment, but we are still awaiting a formal response on the issue.  Hewett later responded that “the allowance (to non-SA born staff) was paid on Saturday 9th May to those that did not receive a UIF payment.”

According to Dis-Chem, stores are frequently cleaned and sanitised. “We have staff dedicated to cleaning key areas throughout the day, and we’ve increased the supplies of cleaning products at check-out counters and at basket and trolley areas,” says Eliasov-Barker.

Eliasov-Barker adds that “staff have been provided with masks and clear barriers have been installed at cash points”. However, Dis-Chem did not confirm whether this protocol is consistent in all of its stores.

Details surrounding the protocol for employees exposed to Covid-19 were not disclosed by Dis-Chem and employees rely on public transport.

Dis-Chem also did not fully disclose their pay policy for both South African and non-South African nationals. According to Eliasov-Barker, “no employee is financially disadvantaged and none of our staff are on unpaid leave. To ensure that we keep our core staff fully engaged, we have, unfortunately, have had to cut the hours of casual workers and locums.”

Arendse stated that Clicks complies with all health and safety regulations in terms of Covid-19: “This includes following Department of Health and government protocols in terms of hygiene and sanitation, as well as dealing with Covid-19 affected staff.”