Hunger and desperation rip through the Karoo 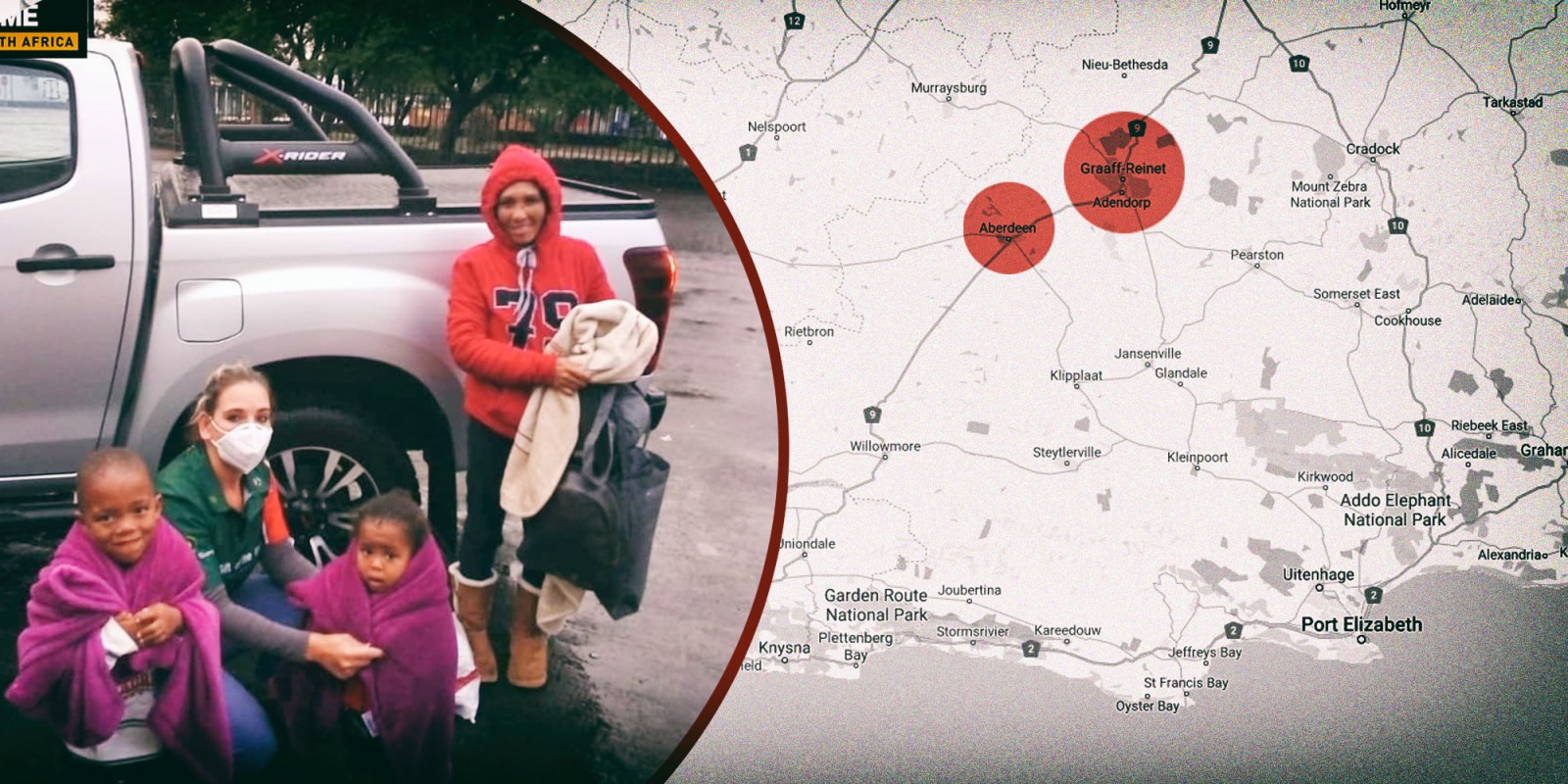 A young mom, carrying her baby on her back and holding her little boy by the hand, walked 55km from Aberdeen to Graaff-Reinet to sell her clothes so she could buy food. The woman and her children were found on the side of the road by a team from Gift of the Givers as the trio were looking for a sheltered place to sleep for the night after their effort was unsuccessful.

“We were on our way home from delivering food when we saw them,” Gift of the Givers’ Graaff-Reinet team leader, Corene Conradie, said.

“They were already soaking wet. She said they were coming from Graaff-Reinet and they were going home. She had walked there with them. She was selling clothes to get money for food but the people didn’t pay her. She was there without anything. They were walking the 55km back home.

“We gave her everything we could: food, clothes, blankets,” Conradie said. “We gave them a lift.”

Before lockdown regulations halted work in the hospitality industry and the casual labour and domestic work markets, many Karoo residents were already battling poverty. The lockdown made the situation desperate.

Lockdown was announced by President Cyril Ramaphosa after he declared the outbreak of coronavirus infections in the country to be a National Disaster. As part of the intervention, social grants were temporarily increased by a few hundred rand a month and a special temporary grant for unemployed people, of R350, was introduced. Payment of the R350 grant will only start in mid-May.

Conradie said she was constantly heartbroken by the levels of desperation that they were encountering during their humanitarian relief efforts.

“The other day I was talking to a woman who came for a food parcel. She was telling me how she was leaving her children alone every day to go to the tip. It is the only place where they can still find food. She couldn’t bear leaving the children without food any longer.

“Another lady, who was from Somalia, said she had to close her shop because of lockdown. On that day they had not eaten for three days. She said every morning she and the kids must decide when they are eating on the day because they only have enough for one meal. There is no help for foreigners.

“There are a lot of domestic workers, casual workers, waitresses and people who worked in guesthouses who now have no money left. Guesthouse owners have exhausted their savings trying to look after their staff.

“This morning I had a call from a school for help. The principal said that parents are overwhelming him with requests for food.

“Every day we are receiving calls for help from as far as East London. Most people ask for a bread or just for R20 so they can buy bread. My heart is constantly breaking,” she said.

“This morning I have put in another order for R32,000 in food from Gift of the Givers. It is a lot for us, but people need to eat.”

Conradie said she is often moved to tears when they deliver food to eight soup kitchens in the Graaff-Reinet area.

“Children will wait all morning with their bowls and when they see the bakkie they run. Even old people, they try to run with their bowl to make it to the line. We have taken their addresses now. We said to the aunties that they mustn’t run. I think how I will feel if it was my mom or my grandmother. I tell them we will bring food to their house. It breaks something in you when you see an old person grab their bowl and run for a bakkie.”

Eldrige Ruiters, a councillor in Aberdeen, said there are places of extreme poverty in the Karoo, a region that has largely been overlooked by government’s food response to the pandemic.

“There are a few stakeholders bringing relief food parcels, and the extra grant money also helped a bit. But there is still a great need among households whose income is between nought to R500 per month,” he said.

“The secrecy around food parcels beneficiaries and the strict regulations of private persons and organisations, who are trying to help, doesn’t assist the situation.

“There are many areas that are being overlooked. These include Rietbron, Nieu-Bethesda and Klipplaat.

“I think about 30% of the people in the Karoo no longer know where their next meal will come from. Further restrictions on casual and domestic work, the hunting season and fence maintenance teams, who mostly work on contract, can see this percentage increase to 45%,” he said.

“Many of these people work but they are not registered with the Unemployment Insurance Fund.”

Ruiters said it was particularly worrying that so many children were battling to access food.

Riana van der Ahee from Vuyani Safe Haven in Graaff-Reinet said they were part of an initiative to distribute 13 tons of food in the town and to surrounding towns.

“We have often received food for the children’s home from the KFC Add Hope Fund. They phoned to ask if they can help,” she said.

She said a Covid-19 relief committee run by civil society, local government, provincial government and the churches had been established to coordinate relief efforts in Graaff-Reinet.

“The food was dropped off late one night and we packed food parcels with maize, porridge, tinned food and oil. It is enough food for a week for a family of four,” she said.

“We know the food doesn’t go far but we have discovered that the two weeks before grants are paid are when families are struggling the most. We are hoping that with the grant increases this situation will improve a little,” she said.

“Almost everywhere in this town and other towns there are informal workers. They will come sweep for you or help out for a little extra money. With lockdown, none of them could work.”

She said she was impressed by cooperation from government departments, the police and civil society to distribute food.

“We have social workers who go into the homes first to check if people really need a food parcel or if they are going to sell it,” she said.

She said as social workers moved through the communities they found several children who had been badly neglected and these children were removed.

“This whole operation just showed us where extreme need existed all along,” she said.

“It really lifted my spirits to see how people were working with each other. One guy, a professional hunter, came to us and said he wasn’t able to work [and asked] if he can help with food delivery. You could see that he developed a deep caring spirit for this community.

“It was also heartening to see that people were not embarrassed to come and ask for help.