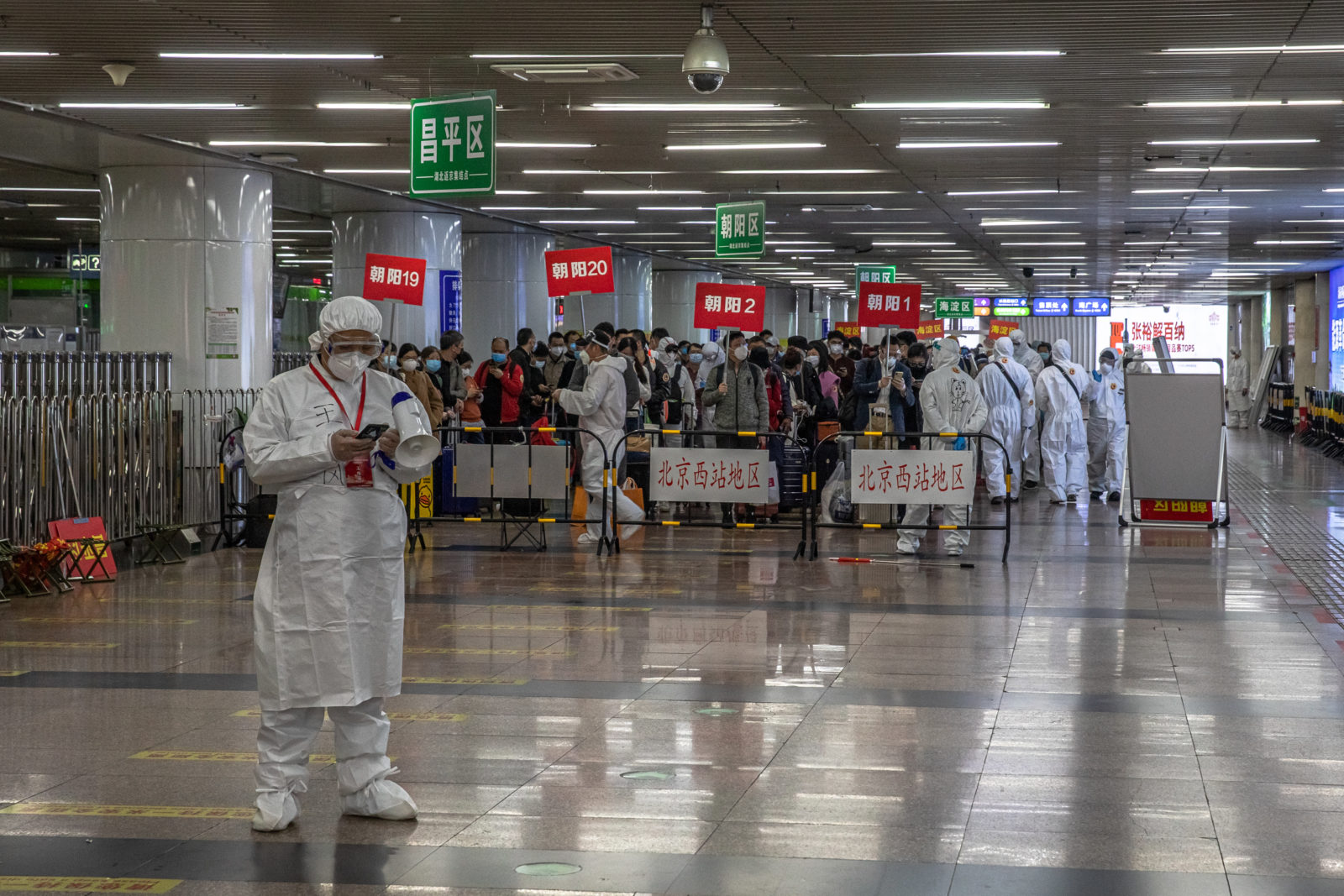 epa08364635 Passengers arriving from Wuhan wait in lines according to their living districts, at the railway station in Beijing, China, 15 April 2020. Passengers arriving from Wuhan to the railway station in Beijing were divided by their districts and sent by dedicated buses to special hotels or their own places from where they have to do two weeks of self-quarantine. Wuhan, the epicenter of the coronavirus outbreak, lifted the lockdown on 08 April, 2020, allowing people to leave the city after more than two months. EPA-EFE/ROMAN PILIPEY

BEIJING, May 13 (Reuters) - Authorities in the Chinese city where the novel coronavirus emerged launched an ambitious campaign on Wednesday to test all of its 11 million residents, after a cluster of new cases raised fears of a second wave of infections.

At least two of the city’s main districts have delivered notices of the campaign door-to-door and sent out online questionnaires through community workers seeking information about tests people have had, and if they belong to what are deemed high-risk groups, residents said.

“To better make use of nucleic acid tests as a monitoring tool and in accordance of the state cabinet’s requirements to expand testing, we’ve decided after consideration to conduct testing for all residents,” according to a questionnaire sent to residents of the city’s Wuchang district, which has a population of about 1.2 million.

Wuhan was placed under a lockdown on Jan. 23 and it was only lifted on April 8. It reported six new cases over the weekend, the first infections since the curbs were removed.

Reuters, citing an internal document to district officials, reported on Monday that the city planned to conduct the campaign of city-wide nucleic acid tests over 10 days.

Residents of two city districts, Wuchang and Hankou, the latter with a population of more than 2.6 million, said they had been told to provide by Wednesday personal details including any history of nucleic acid tests and whether they belonged to any of 12 “key groups”, according to four residents and copies of questionnaires seen by Reuters.

The tests would include both nucleic acid and serum anti-body tests, according to a notice issued by Wuchang district.

The 12 “key groups” include confirmed and asymptomatic coronavirus cases and their close contacts, people with a fever, school, medical, transport, bank, supermarket and government workers, and people coming back from overseas or who plan to leave Wuhan for work.

Asymptomatic cases, or people who have tested positive but show no clinical symptoms such as a fever, are capable of spreading the virus to others. China does not disclose estimates of the number of such cases.

The Wuchang district said in its notice it aimed to test all residents, but stressed testing for those in the 12 categories “must reach 100%”.

Wuhan is divided into 13 districts, and covers an area of about 8,500 sq km, almost as big as the New York metropolitan area.

The Wuhan government said on April 23 that the city had 53 laboratories to process tests, and 211 locations where nucleic acid tests can be done.

It was not clear when the tests would be conducted in Wuchang, but some residents of Hankou said testing had started there.

The Wuhan government’s public relations office was not immediately available for comment on the campaign.

An official at the city government’s “Mayor’s Hotline” confirmed the city’s plan to test all residents but told Reuters there has been no notice by the city health authority about officially starting the tests.

Different city districts could be conducting tests at their own pace for now, the official said.

Since the Wuhan’s lockdown was lifted, the city has conducted an average of 47,000 tests a day and more than 1.5 million tests in total, according to Reuters calculations based on city health authority daily reports.

Of China’s total of nearly 83,000 confirmed infections, Wuhan accounted for 50,339 of them. The tally does not include asymptomatic cases.

More than 3,800 people in Wuhan have died from the virus, authorities say, or about 80% of China’s fatalities.

It is not clear if Wuhan residents will have to pay for their test or if the local government will cover the cost.

Hubei provincial authorities have gradually brought down testing costs and recently capped prices of nucleic acid and IgM/IgG antibody tests at 180 yuan ($25) and 50 yuan ($7), respectively, according to the Changjiang Daily.