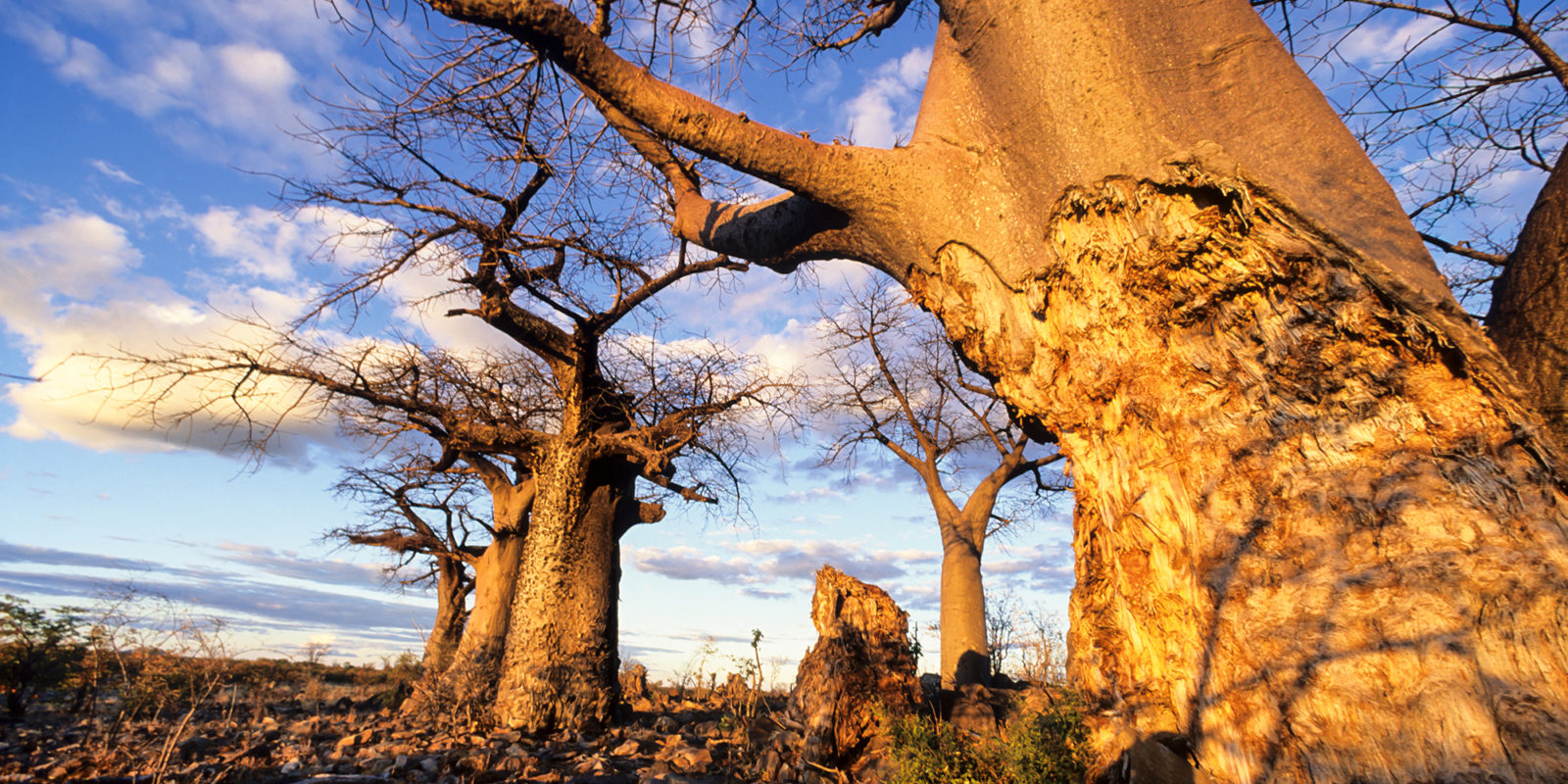 Baobab trees in the north-east of South Africa were used to verify the accuracy of the climatic record in trees found in stone-wall ruins of the forgotten Bokoni civilisation. (Photo: Gallo Images)

Hundreds of thousands of people – possibly even a million or more – across southern Africa died from starvation and war during the ‘crushing’, the Difaqane or Mfecane, of 1816-17. One of the main causes of this often-forgotten catastrophe is finally being revealed by a network of ancient trees.

In the heart of a Cape cheesewood tree that had fallen among the stone walling of a forgotten civilisation is the story of one of the worst catastrophes ever to hit South Africa.

The Zulu referred to this time as the Mfecane, the “crushing” – the Xhosa called it the Difaqane. It was a period in the early 19th century marked by widespread chaos, warfare, starvation and it even drove some to cannibalism. What fuelled this troubled time has been a source of debate. Some historians pointed to the slaving happening in Delagoa Bay, others argued it was caused by the rise of the Zulu state under Shaka.

But a picture is emerging of what was driving this chaos, and it is being provided by a number of ancient trees scattered across southern Africa.

The culprit was a mega-drought.

Each tree is adding an important piece to the data and the latest research was provided by a Cape cheesewood and an African cherry tree discovered in the Buffelskloof Private Nature reserve in Mpumalanga.

The two trees were found among the ruins of a stone-walled Bokoni site. The Bokoni were the super farmers of their time who lived across a swathe of Mpumalanga, from present-day Ohrigstad to Carolina.

To survive periods of declining rainfall, they took to terraced farming. They were able to grow crops where others failed. But like so many other communities, the Bokoni could not escape the Mfecane.

The Cape cheesewood and the African cherry never experienced the Mfecane, but the information that researchers were able to glean from them is still important.

“The Buffelskloof trees were not old enough to show this drought,” explains Professor Stephan Woodborne, of the National Research Foundation’s iThemba laboratories.

“What we did was compare the shorter records from Buffelskloof with the baobab record from Pafuri. The match was good and the drought was identified in Pafuri. It was likely part of a synoptic shift that affected a wide area.”

The Pafuri baobab record Woodborne is referring to are a number of old baobab trees found in the north-east of the country. Through isotope analysis, these giants have provided a 1,000-year-long rainfall record. Stable isotope signatures reveal times of limited water or temperature variations.

The so-called Buffelskloof trees were used to verify the accuracy of the Pafuri climatic record.

The evidence is increasingly showing an extensive drought that was probably the worst in a thousand years.

“This was more than a 10-year drought – if it had been a one- or two-year-long drought people could make do, but 10 years is a long time,” says archaeologist Dr Alex Schoeman who worked on the research. She has also worked extensively on the Bokoni.

Backing up the Pafuri baobab data is the isotope evidence Woodborne and his team were able to collect from a yellowwood tree, of which a piece is now kept in the KwaZulu-Natal Museum.

The tree, which was felled near the town of Karkloof in KZN, is 750 years old. And the data is so precise that Woodborne believes it even puts a date to this terrible drought. Interestingly, it happened at a time when the rest of the world was also experiencing unusual weather conditions.

“Our isotope analysis shows a very profound change in conditions around 1817 (with errors this could be 1816),” explains Woodborne. “It is still a work in progress, but it is almost certain that the change was a drop in temperatures or a decrease in rainfall. That period till 1824 is the coldest/driest part of the entire record.”

In the northern hemisphere, 1816 became known as the year without summer. Frost covered the fields in the height of summer, harvests failed and people starved. Those who lived through this time recalled the unusually spectacular sunsets that were captured on the canvases of landscape artists like JWM Turner. Those yellow-tinged sunsets held a clue to the origin of this freakishly cold period.

The sunsets were believed to have been caused by high levels of tephra that had been spewed into the atmosphere by the eruption of Mount Tambora in what is now Indonesia in 1815. It triggered a volcanic winter.

This eruption, Woodborne believes, didn’t set off the drought recorded on the Karkloof yellowwood.

“It is just a coincidence. There have been many other eruptions in the last 1,000 years and I have looked for the evidence of climate effects here in southern Africa. Nowhere from Namibia to Madagascar is there a systematic response that I can attribute to eruptions. The main driver of the climate at this time was sea surface temperature in the south-western Indian Ocean,” he explains.

In South Africa, this mega-drought was made all the worse by some years of plenty that preceded the declines in rainfall.

“What shows up in the baobab and Buffelskloof data is that the big drought is preceded by very good rains. It has been suggested that when things were good, some of the resilience networks were not enforced. People started planting in marginal areas, and maize was introduced into Kwazulu-Natal (which is less drought-resilient),” says Schoeman.

There is other evidence for this drought. In the Killie Campbell Africana Library at the University of KwaZulu-Natal are first-hand witness accounts to this period. They called the drought the Mahlatule famine, which is translated as “the time we were obliged to eat grass”.

Those super-farmers of their day, the Bokoni, were not to escape the Mfecane. As the country became more violent, the Bokoni moved their settlements from the cultivation-friendly gentle sloping valleys to hilltop and ravine sites that were easier to defend. The limited sunlight in these kloofs impacted on the productivity of their gardens. They had defeated droughts in the past, but the Bokoni finally met their match when they were crushed by the Bapedi, somewhere north of the Olifants River, around 1830. The Bokoni scattered and were forgotten by history.

The Bokoni may no longer be around, but to Schoeman, learning from their ingenuity and tenacity can help the small-scale farmers of the present survive in a time when climate change is threatening. The droughts of the future are likely to be as defining for the country as the Mahlatule famine was all that time ago. DM

Nathi and Africartoons • 37 mins ago