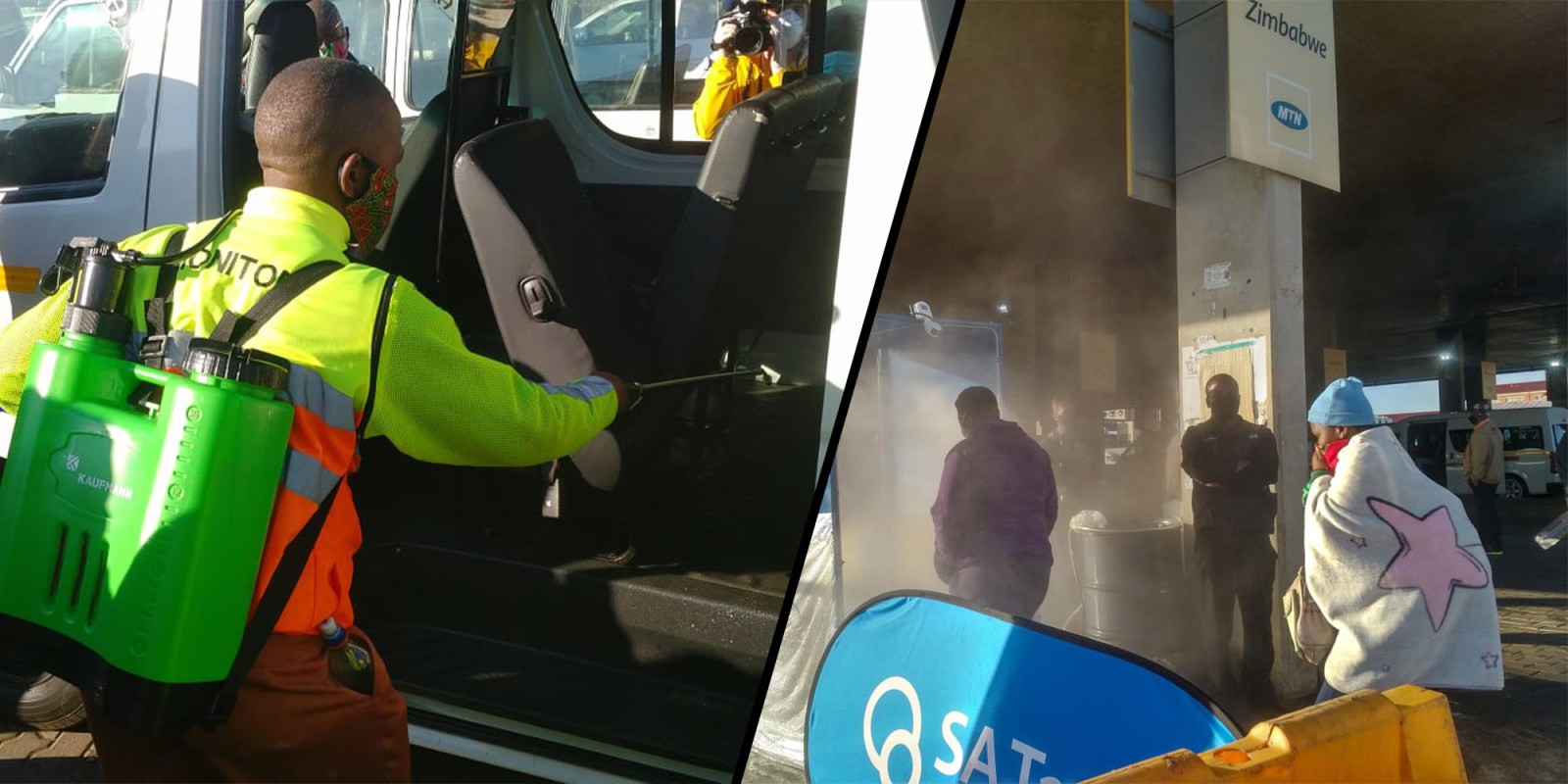 The Gauteng transport and health departments have piloted measures to intensify efforts to combat the pandemic at the Bara Taxi Rank in Soweto, including the introduction of sanitising steaming-mist booths.

Gauteng on Monday 11 May moved to heighten efforts to combat the spread of Covid-19 over and above physical distancing and the wearing of masks in public. Announcing several measures to curb the spread of the pandemic, the health department said that among other measures, the appointment of a taxi-rank management would enhance enforcement of regulations, including physical distancing.

Provincial Roads and Transport MEC Jacob Mamabolo said that as the country moved to Level 4 of the Disaster Management Regulations affected by President Ramaphosa to fight the spread of Covid-19, the department had seen an increase in taxis, and was introducing several new measures.

One of the piloted interventions is sanitising steaming-mist booths which commuters have to pass through before they board their taxis. As they move through, their movements and other reactions are monitored on a connected laptop computer.

Mamabolo said the steaming-mist technology was the same used a week ago in the re-opening of the Gautrain services, and that it had proved to be very efficient. Joining Mamabolo were representatives of the two taxi mother bodies, the South African Taxi Council (Santaco) and the National Taxi Alliance (NTA), his head of department and Johannesburg Mayor Jeff Makhubo.

He said the challenge with the steaming mist was directing passengers, because there were no guardrails, both at the Bara Taxi Rank and in many other taxi ranks in the province, as opposed to the Gautrain.

“We are also trying to check the technological systems at our disposal. Good technology is in place. Today we ensured people queue and go through the booths and this should continue once the facilities are fully functional,” said Mamabolo.

“The lack of proper gates and entrances will make it hard to get our value for money. You can see there will be a challenge here. That is why we used tape to exercise some form of control for commuters coming into the taxi rank.”

The department also announced that it had appointed a taxi-rank management committee.

“They are going to be our Covid-19 enforcers. We are testing management support committees that will be introduced in all taxi ranks.”

Mamabolo said in addition to sanitising ranks, taxis and the wearing of masks, the department had also ensured that waiting areas were clearly demarcated, and that physical distancing was key.

In addition, the provincial department said commuters would now be sanitised at every loading bay.

“We are doing this as a reaction to non-adherence to social distancing,” added Mamabolo.

The disinfecting of vehicles would continue, and the department would scale up the cleaning of taxi ranks around the province. All the announced interventions would be affected across the province – no easy task, as there are 881 taxi ranks in Gauteng. The city of Johannesburg alone has 460 taxi ranks.

“This will also give us the opportunity to enforce the wearing of masks. We have told the taxi industry that ‘no mask no ride’,” said Mamabolo.

Mamabolo said some of the department’s partners had agreed to the adoption of taxi ranks for overseeing purposes. Mamabolo adopted the Noord Taxi Rank in Johannesburg, commonly known as the MTN rank.

Asked when new interventions such as the steaming mist booths will be rolled out, Mamabolo said:

“We will run the pilot until the end of May.”

Thereafter the department would have to make a decision based on whether the booths were effective.

“Post Covid-19 we will have a new normal,” the Gauteng Taxi Alliance’s Alpheus Mlalazi said.

The department has signed a partnership with Armscor, the Department of Defence’s acquisition agency.

“We wanted to be sure about the quality of the product and Armscor did a quality test and sanitised the steaming mist,” said Mamabolo.

Johannesburg Mayor Jeff Makhubo said community transmission was the main issue now. He said the choice of the Bara Taxi Rank as a starting point was influenced by its size.

“If we don’t contain it here, the virus will spread wildly. We need to acknowledge that life has changed and that we need to rethink the way Bara is organised,” said Makhubo. They would also visit Rea Vaya and Metro bus hubs and ensure containment services extended to other modes of transport.

“Post Covid-19 we will have a new normal,” the Gauteng Taxi Alliance’s Alpheus Mlalazi said.

Mlalazi said the measures were taken to ensure security and order at taxi ranks and that passengers were treated as customers:

“We want these booths because they are easy to use. They are more effective than the manual spray. We are in support of the City and department’s interventions and we are confident we will keep our commuters safe.”

“We were caught off guard by the lockdown because we did not know what to do. The taxi industry was the only one that could transport essential workers.

“In our meeting with the MEC yesterday, we decided to adopt a taxi rank each to ensure that all our taxis are sanitised. We are ready at every level and even ensuring compliance among our own drivers.”

Shabalala pleaded with the government to end the suffering of the taxi industry by unlocking it.

“We are hoping for a relief and hoping that it comes really soon. Many vehicles will be repossessed; we hope the government comes up with a good solution that will help the industry,” said Shabalala.

Mamabolo said there were two outstanding matters yet to be finalised — the issue of taxi rank security and of hawkers, which were both still under discussion.

“We want to register hawkers to ensure compliance and efficacy,” said Makhubo. DM