Bad medicine: The past and present of toxic ‘cures’ 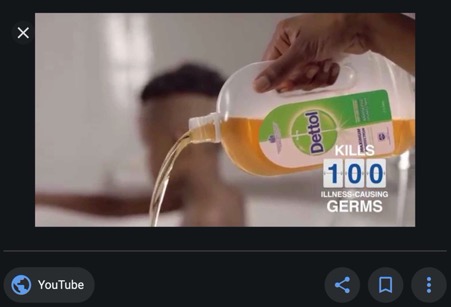 In one of Covid-19’s many dreadful ironies – the manic pursuit of sterility to stop the virus has also had toxic consequences.. (Screengrab: Rebecca Hodes)

US President Donald Trump’s remarks about the potential use of disinfectants to treat Covid-19 have been widely reported and discredited, but they are not anomalous. The promotion of toxic substances to treat medical conditions has a long and fetid history, including in democratic South Africa.

I Trump’s promotion of disinfectants to treat Covid-19

In a White House briefing on 23 April, US President Donald Trump suggested that disinfectants (such as bleach and isopropyl alcohol) might be used to treat Covid-19. After a presentation by William N Bryan, a scientific adviser at the US Department of Homeland Security, in which Bryan outlined some prospective means for combating Covid-19, and – crucially – before Bryan could answer questions from journalists or other senior health officials, Trump took to the podium. He stated:

“Right. And then I see the disinfectant, where it knocks it out in a minute. One minute. And is there a way we can do something like that, by injection inside or almost a cleaning. Because, you see, it gets in the lungs and it does a tremendous number on the lungs. So it would be interesting to check that. So, that, you’re going to have to use medical doctors with. But it sounds… it sounds interesting to me.”

In the briefing’s aftermath, toxicologists, emergency physicians and public health officials raced to counter Trump’s comments. Their aim was to stop a desperate public from auto-enrolling in a dangerous experiment, on the basis of their president’s ramblings. Medical officials took to the news to explain that the internal use of bleach or concentrated alcohol could do massive harm to the oesophagus, liver and kidneys, with potentially lethal results.

One of the key directives of the public health response to Covid-19 has been to promote hygiene, particularly through hand-washing, mask-wearing, and the use of hand sanitisers and cleaning products. It is indisputable that these measures are essential to prevent Covid-19 transmission.

But – in one of Covid-19’s many dreadful ironies – the manic pursuit of sterility to stop the virus has also had toxic consequences. In the opening three months of 2020, the US Centres for Disease Control reported a surge in phone calls to national poisons hotlines due to harmful exposure to cleaning chemicals.

The Poisons Information Helpline of the Western Cape has seen its own increase in calls from the beginning of April 2020 (coinciding with South Africa’s Covid-19 lockdown), relating to the accidental ingestion of hand sanitisers and other disinfectants, particularly among children. This has been explained by Dr Cindy Stephen, who works on the Poisons Information Helpline run by the Poisons Centres at Red Cross War Memorial Children’s Hospital and Tygerberg Hospital in Cape Town.

Back in Washington, when questioned by journalists about testing injections of disinfectant to treat Covid-19, Trump explained that he had made these comments “sarcastically”. Setting aside the imperative for global leaders to speak with extreme clarity and care about the pandemic, sarcasm just isn’t a common feature of Trump’s oratory. He managed to even conclude a prank sales pitch with Ali G, back in 2003, on a note of bombastic bonhomie.

Tailing health officials, global corporations that manufacture household cleaning products recognised the dangerous consequences of Trump’s remarks. Amidst growing evidence that their chemicals were being poisonously repurposed in the Covid-19 pandemic, Reckitt Benckiser – makers of Lysol and Dettol – issued a statement on “Improper use of Disinfectants” on their website. It read:

Halt your applause. The manufacturers of chemical disinfectants have long promoted, and profited from, dangerous uses of their products. Reckitt Benckiser (RB) is a global conglomerate that has made its fortune from manufacturing chemicals since the early 19th century. The history of the company (its globalisation, with various mergers and acquisitions) is also the history of corporate consolidation and profiteering over the last two centuries.

RB has been found guilty of price-fixing and corporate collusion by a number of national consumer commissions. In 2014, France’s Autorité de la concurrence (Competition Authority), for instance, meted out its largest fine in history to RB (€950-million), together with 12 other corporations, for fixing the prices of popular hygiene products.

South Africans of all classes and races have a long and intimate relationship with the detergents, including Dettol (made by RB). For decades, we have entrusted this bronze elixir with the health and safety of our families, adding caps-full to baths and buckets to wash bodies and clean wounds. The milky tinge and sterile smell of a Dettol soak evoke a vivid nostalgia for many, shoring up our sense of purity and safety – perhaps bygone.

The makers of household disinfectants and chemical cleaners understand, and have capitalised on, our collective desire to be germ-free. In discussions with people in South Africa who have tested positive for SARS-Co-V-2 (the virus that causes Covid-19 disease), many have described feeling “dirty”, conveying their need to keep their families, friends and contacts “clean”. The virus, which has no morality, is already understood as a punishment for lapses in personal hygiene, as well as other kinds of mischief.

Political leaders, including Trump, have promoted chemical cleaners as a prospective redemption from Covid-19. If we can sterilise ourselves, and rid our surroundings of pathogens and their vessels, might that save us? The pitch for depollution is among the most powerful directives in modern history. It is replete in South Africa’s own past and present, in the design of colonial and apartheid settlements and migration controls, and in the democratic state’s haphazard attempts to improve public sanitation.

For millennia, cleansing and purification rituals have had a technological component. We have used the stuff available to us in our most eminent and intimate experiments. In South Africa, and many other African states, household detergents, like Jik and Sunlight, have long been used to clear the body of what is unwanted. The history of abortion in South Africa (chronicling two centuries) attests to our reliance on detergents and other commonly-available chemicals to end pregnancy, particularly in the absence of public access to safe and legal abortion.

Before discounting these practices as backward or ignorant, recall that, as recently as the 1980s, the manufacturers of chemical disinfectants were actively promoting the internal use of their products as vaginal shampoos and douches. As the evidence-base about the toxicity of chemicals in douches expanded over the 20th century, corporations cannily adapted their messaging, tapping into women’s fears about being dirty and undesirable, and repurposing their products as promoting “freshness”.

Despite the links between vaginal infections, sexually transmitted diseases, and douching, the Office of Women’s Health in the United States reports that almost one in five women aged 15-44 in the United States today still douches. When Trump remarked on the possibilities of using chemical disinfectants as “injection from inside”, he championed an already popular and poisonous practice.

Democracies are meant to protect their citizens. One of the positive outcomes of the Covid-19 epidemic is that political leaders are taking advice from scientific experts about the best means of managing the pandemic.

South Africa’s Ministerial Advisory Group on Covid-19 appointed Salim Abdool Karim, among the nation’s most renowned scientists, as its chair. This is a clear reflection of the Cabinet’s need for empirical guidance in charting the right path through the pandemic. But, it is also increasingly apparent that the ANC government is struggling to define the parameters of its authority in the midst of Covid-19 and, in many instances, has already over-reached its powers.

South Africa’s lockdown is increasingly controversial. Violence and brutality in the name of “disaster management” are more visible every day. The social cohesion that has, thus far, knitted together the state’s successes in managing Covid-19, is fraying. Abuses of state power and authoritarian diktats are sewing mistrust and encouraging non-compliance with the state’s pandemic response. Now, more than ever, it is our collective responsibility to scrutinise and challenge political leaders when their actions endanger others.

To shore up trust and respect for political authorities in the age of Covid-19, we need an honest reckoning with the mistakes of the past – not just of colonialism and apartheid, but also more recent cases of ethical and medical violation in the era of democracy.

The state’s concentration of power within the hands of ANC leaders, and their own abuses of that power, must be confronted. Information overload, together with the fear of voicing dissent in a time of much-needed civic solidarity, are fuelling our collective amnesia.

We don’t have to reach very far into history to find an example of current political leaders who – as with Trump – abused their positions to promote toxic chemicals as alleged cures for dread diseases.

In the mid-1990s, Nkosazana Dlamini Zuma, the first minister of health in democratic South Africa, supported and promoted the drug Virodene as a potential cure for AIDS. She violated the state’s protocols for medicines approvals, arranged a private presentation by Virodene’s promoters to the South African Cabinet, and supported experiments with Virodene on people with AIDS.

Virodene contained dimethylformamide, a common chemical solvent, proven to be hazardous to humans even through occupational exposure, let alone internal use. In the wake of the Virodene debacle, which has been chronicled with immense forensic insight, a study in the journal AIDS Research and Human Retroviruses found that exposing cells to dimethylformamide and similar solvents could “activate” HIV, rather than killing or curing the virus as claimed by Virodene’s researchers.

During the Virodene debacle, experts working for the Medicines Control Council (MCC) tried to uphold the bio-ethical protocols that protect people in South Africa against experimentation with harmful drugs. They were punished for doing so.

Senior MCC officials who refused the requests of multiple Cabinet ministers to fast-track Virodene into human trials were given the “option” of immediate resignation or suspension with charges of misconduct. The University of Pretoria found that it was Virodene’s researchers who were guilty of ethical misconduct, but the myth of the drug’s curative properties lives on. In online forums about Covid-19, dimethylformamide – the supposed miracle ingredient of Virodene – is again being floated as a prospective treatment.

As the aphorism goes, “History doesn’t repeat itself, but it rhymes”. The Covid-19 pandemic is a new catastrophe, but some of its features are familiar, including the political and popular responses it has evoked. In remembering our mistakes, confronting their legacies in the present, and refuting dangerous claims for the future, there is hope for improving public health in the wake of Covid-19. DM

Rebecca Hodes is a medical historian at the University of Cape Town.