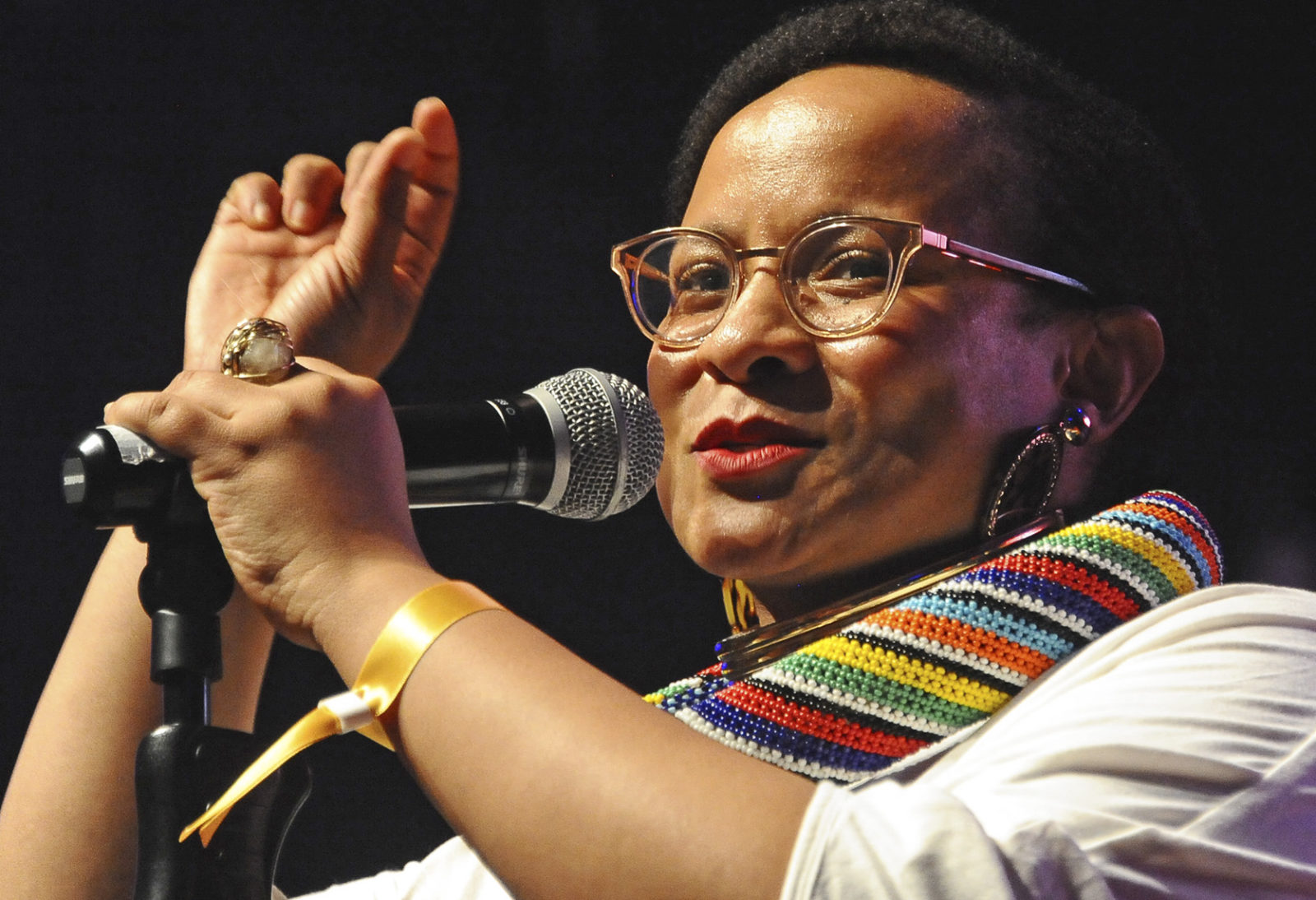 Lebo Mashile understands that poetry is history and heritage as much as it is revolution and resistance. (Photo: Oupa Bopape / Gallo Images)

Poetry is a weapon and a refuge and Lebo Mashile wields it expertly in our new world where fresh battles are being fought and safe places will have to be remade.

There was that time Lebo Mashile “smoked a spliff with Jesus Christ”, that time she parted ways with a women’s magazine that photoshopped her 20kg lighter; and that time she stood firm against the erasure of Winnie Mandela’s story.

There have been many of “those times” for Mashile, whose poetry and voice have never shied away from what others find difficult to say.

“People may call me difficult, and even as a child I’d be the one who would point out the elephant in the room. But my aspiration as an artist is to say the unsayable,” says Mashile.

She says: “I reference history because there is a continuity of thought; there are ideas that people died for. I may deserve credit for my labour, but I name my community, my influences and my history. It’s also because erasure happens so easily to radical thinkers and black women artists. Even the lack of support for the arts now is erasure and therefore it’s a deliberate act of violence.”

She’ll say, “Hell no, not in my name” in a heartbeat. She insists on pissing off prissy people who are still iffy about her work as literary reference. Her gloves are off when she takes the fight to corporates and even NGOs who exploit the cover of the Covid-19 crisis to undercut artists, and she has no problem calling out the government for its feeble and failed plan of action for the arts as the economic fallout of lockdown hits hard.

As outspoken and rebel-spirited as she is, Mashile is not rigid, removed or hard. Maybe it comes from being the insider-outsider she says she’s always been – she understands both sides. It’s also given her the lessons of empathy, introspection and enough distance to view things differently.

Mashile was born and grew up in the city of Providence, Rhode Island in the US and is the daughter of South Africans who met in exile there in the 1970s. She grew up with other migrant kids who were on the margins of a divided and contradictory America. Kids from minority groups, as she tells it, who were bussed to schools with predominantly white children, where they didn’t quite fit in and then would return home to eat their “funny” foods or to speak their “funny” languages.

Her family returned to South Africa when she was a teenager, just as South Africa had shed its skin of apartheid. It was a country all shiny and new but she would find that in many ways it was still just a snake.

“America was like a training ground for living life in a divided South Africa,” she says.

The teenage Mashile would belong and then not belong as an American transplant in Africa. She was often adrift in these in-between places with only journalling and writing to keep her moored. It was a case of being both the insider and the outsider.

She would go on to study and earn her law degree at Wits University, but her real teacher would be underground Joburg. The throb of the city at its edges met her talent, already bursting in words and rhythm. Mashile found a platform and a community and would become a pioneer of spoken word poetry in SA, which was oral art in her hands. She would also become an acclaimed actress, TV presenter, author and columnist.

Poetry, though, is her first love, also her refuge and her weapon. She says: “Poetry has deep historical reach especially in a country like ours. Poetry enshrines memory and culture. It’s always been a tool for resistance and revolution.”

Mashile embraces duality; she loves the messy, she says, with all its collision points and contradictions. Creativity resides here for her as it does in speaking with her authentic voice. Authenticity is her big laugh, her compulsion to seek out what resonates. It’s made her endure in a fickle industry that gets tangled and strangled in a cult of celebrity.

Authenticity is about owning her life challenges, from her weight wars, to needing to do the deep dives into privilege, race and the dark legacy of colonialism. She’s also been speaking up for mental health support as she journeys through her own therapy. (Check out her discussions and conversations on mental health at www.myhealthtv.com.)

Mashile wants the arts community to organise better and to stop hiding from its own agency and its personal responsibility.

“We are storytellers and communicators so we know how to get messages in front of people. We can be a movement that rebuilds society especially after Covid. We also can’t keep finding ourselves in shitstorms and saying we don’t understand how we got there.”

There will be a new world to survive when Covid-19 passes. Mashile believes the time of the ideas economy is coming and those who understand collective action, creative collaboration and compassion will survive best.

“It will be a society that we choose based on our values, world views and the things that define character,” she says.

She knows this battle is coming but she may not even recognise it as a fight because it’s what she stands for anyway.

“It’s a little like not noticing what’s always been under your nose,” she says.

But Mashile is noticing, she is taking it all in right now and it’s largely because the mother of two boys wants answers and solutions for this next generation.

She wants to tell her boys about vulnerability and uncertainty in a world now changed forever. But she also wants to tell them about hope, about a future as well as about ancestors and heritage.