‘When they see us, they see hope’: Distributing food aid under the lockdown 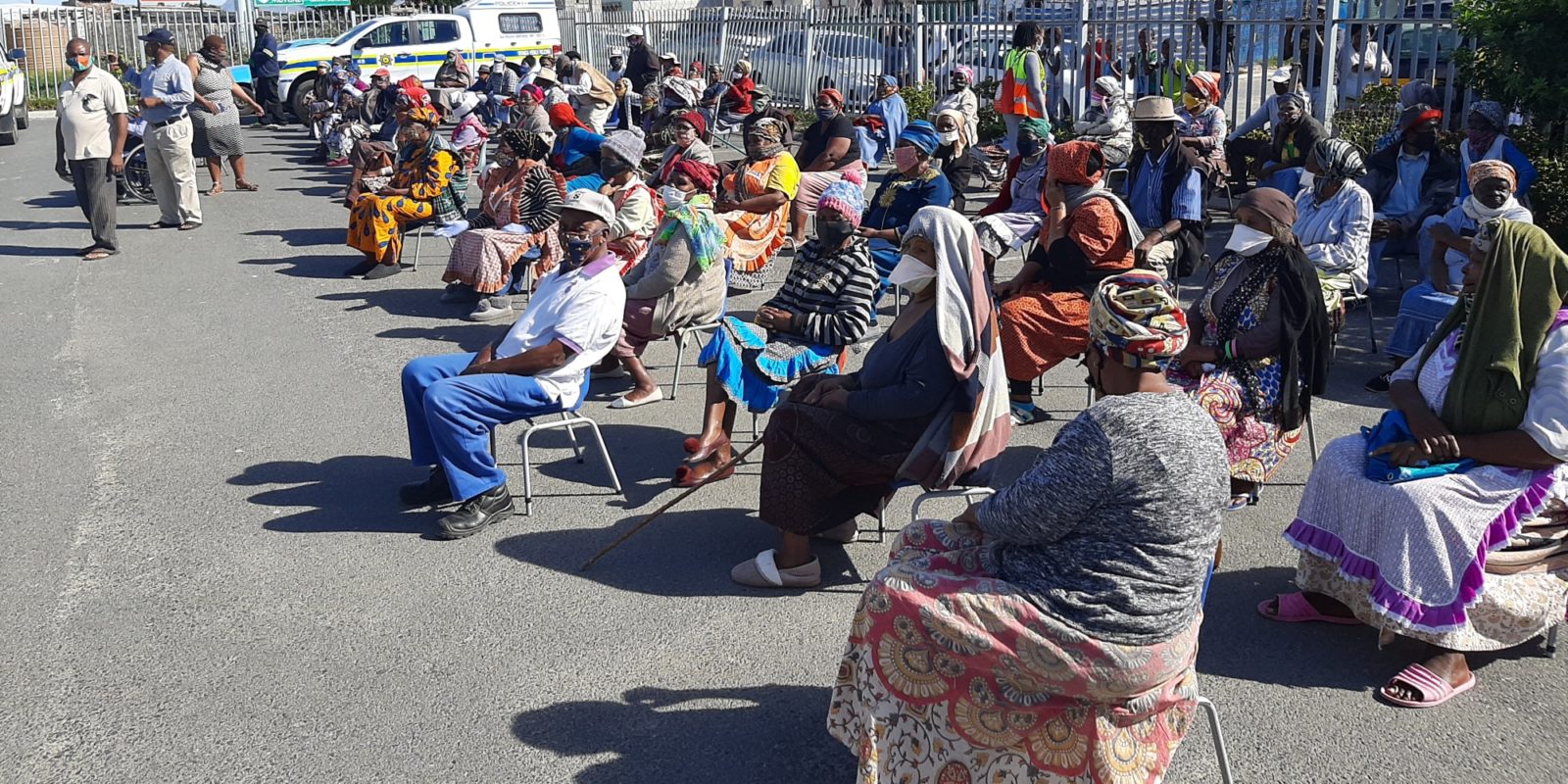 A few of the elderly at Crossroads wait to receive a food parcel from Gift of the Givers. Many are the primary caregivers in their households. 6 May 2020. (Photo: Sandisiwe Shoba)

For Gift of the Givers, delivering food aid is nothing new. Despite hunger coming to the fore as a lockdown issue, it’s always been a matter of concern for them.

Nyanga in the Western Cape is infamously known as the murder capital of South Africa. It’s also one of the poorest regions in the province with a 56% unemployment rate according to the 2011 census.

This was Gift of the Givers’ first stop as they travelled to three townships – Nyanga, Crossroads and Langa – to deliver 700 food parcels on 6 May.

“With Covid-19 coming along, there was a devastating effect throughout the region because donations that were coming into this area from other resources, like soup kitchens, all shut down,” said Ali Sablay, the organisation’s Project manager for the Western Cape.

A group of roughly 100 elderly men and women lined up outside the gates of the Lusaka Community Hall. Some were wearing makeshift masks of cloth and even leather. They hobbled towards the SAPS officers who asked for ID documents and checked their names against a list. Some arrived in wheelchairs. As they entered the area, each person was sprayed with hand sanitiser and led to sit on chairs set out a metre apart.

“A parcel can last two to three weeks depending on the size of the family,” said Mishkah Samie, a facilitator at Gift of the Givers.

The elderly and the physically disabled were prioritised for this parcel drop-off.

“Like in many of the townships, the grannies are left to look after the young ones. They are often looking after a family of seven or 10 with the small grants they get.”

Nonqaba Florence Mantyi, a 60-year-old pensioner from Nyanga, said the food parcel would ensure that she only has to buy “meat and a few other perishables” to ensure her family is fed for the next few weeks.

She’s one of six people in her household. Her two daughters are unemployed, but work piece-jobs. Mantyi’s monthly Sassa grant helps support them and her three grandchildren.

Some had walked to the community hall and after receiving their parcels waited for family, neighbours and friends to pick them up or accompany them home. Children arrived with old trolleys and crates, while others came in cars. Nyanga SAPS station commander Brigadier Vuyisile Ncata explained that the elderly could be robbed of their parcels if left to travel alone.

At Crossroads, near Nyanga, a further 200 parcels were delivered to the aged and disabled.

Sablay explained that Gift of the Givers has a close relationship with Nyanga SAPS and has been actively involved in the Nyanga and Crossroads communities for the past three years. SAPS called the organisation to deliver parcels after residents kept arriving at the police station to beg for food and other bare essentials.

Valencia Krwc and Agnes Sitemela, had walked a few blocks to Sigcawu Primary School where parcels were distributed.

The pair are neighbours and between them they care for 10 grandchildren with their combined monthly pensions.

“The pension money finishes before the month even ends. We have to pay for everything with it, school supplies, transport for the children to go to school,” said Krwc.

They hoped the parcels would last at least a month.

In Langa, another 400 parcels were distributed to households in need.

A Covid-19 Local Command Centre has been established in Langa by the South African Human Rights Commission. Here, the community has been trained and organised itself to deal with health, labour, social issues and food relief in Langa alongside the local councillors, SAPS and the provincial department of health.

Appointed street representatives went door to door to deliver parcels as a means to limit contact.

Anele Gqasana, the Office Administrator and a Covid-19 monitor at the Command Centre said hunger was a serious issue in Langa even before the pandemic.

“We can’t reach everyone. This is the least we can do for now but we are hoping that this is not the end of our relationship with Gift of the Givers,” said Gqasana.

One problem with distributing food aid in Langa has been the lack of a clear database of who has received food parcels and who hasn’t.

“We have a problem here of double-dipping. Without a proper database of people who need parcels, an organisation can come with their own criteria for people who are disabled or elderly. The next day another organisation will come with the same criteria and the same people will receive food parcels and there’s no structure about who gets what and when.”

Gqasana hopes that the Command Centre will help with streamlining the distribution process to prevent this in future.

Sablay, said his team at Gift of the Givers hasn’t experienced any violence or looting when doing food drop-offs. This could be because the truck is accompanied by a police escort, but Sablay says it’s because people trust the Gift of the Givers brand.

The foundation often works in tandem with community leaders and committees to organise food aid.

“When people see us, they see hope. When we announce that we’re coming into the area they know that each and everyone will be assisted, so there’s always calm.”

But Gift of the Givers is one of the largest charity organsations in the world with abundant connections and resources. For some of the smaller organisations, red tape and other issues with bureaucracy have hampered their ability to deliver food to the needy.

As Daily Maverick previously reported, the requirement to collaborate with local municipalities or social development structures has become a time-consuming and tiring exercise.

With the growing hunger crisis in the country, NGOs, trade unions and experts are calling for the government to implement effective solutions to ensure the country’s hungry are fed. DM