Zooming with the Zumas

Duduzane’s Dubai Lockdown Diary – Everything But The Lost Years 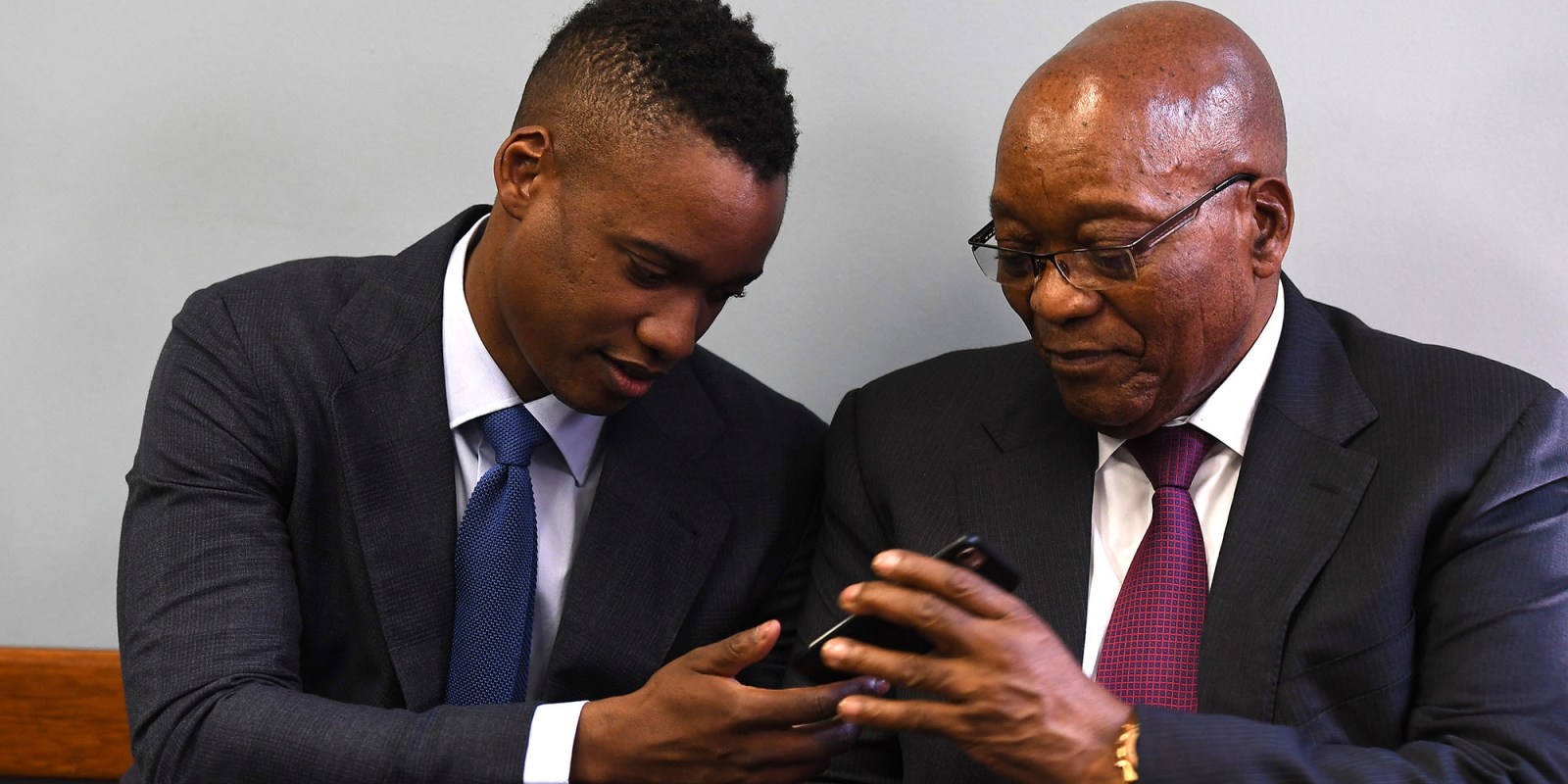 Duduzane Zuma, quarantined in his R18m Burj Khalifa apartment with its sweeping vista of Dubai’s skyline, has uploaded to Youtube, for your lockdown pleasure, ‘Hours and Hours of Discussion’ with his father Jacob Zuma, who is about to finally face his corruption trial back in South Africa.

As US gonzo journalist Hunter S Thompson once mused, “when the going gets weird, the weird turn pro”.

In a peculiar inversion of an Oedipal drama, Duduzane Zuma, son of Jacob, and lately the anointed one when it comes to defending the Zuma legacy, promises with the launch of his conversation series, a deep-dive into the trials and tribulations of South Africa’s former First Family.

In a 3.45-minute trailer, featuring a soothing Downton-Abbey-esque tinkling piano theme, Duduzane introduced his personal/public diary titled “Zooming with the Zumas” on YouTube on 3 May 2020.

The day before, Vaultage TV, producers of the “sessions”, had launched on YouTube, just in time for Level 4 lockdown and the curfew.

To the sound of a keyboard clacking, a ribbon of titles between scenes in the trailer provides some hint of what to expect in what promises to be a long-running series in which various villains are identified, vilified and set in place in the revised Zuma narrative set to unfold.

“A Conversation”, “Between A Father and a Son”, “Claiming Their Own Narrative”, “Untold Stories”, “Current Events”, “Proud Countrymen”, “Hours and Hours of Discussion”, “That People Need To Hear” and then finally, piano reaches a crescendo, “Jacob Zuma and Duduzane Zuma” read the titles.

From the thatched roof reflected in the double doors behind Jacob Zuma, it appears as if the former president finds himself settled-in nicely at Nkandla.

It’s a perfect lockdown shelter option, what with its private bunker and the mobile clinic. One paid for by you, the other by a Russian businessman.

The ex-prez looks in rude health, we are pleased to report. Clearly girding his loins for the marathon corruption trial he is about to face.

And so begins what must rank as one of the most unsettling Covid-19 “celebrity” personal/public postings since the globe moved online to escape the pandemic.

Trapped as we are at present in what feels like a global lunatic asylum run by morons while we’re being terrorised by an invisible crown-wearing virus with a penchant for human flesh, the interview between Duduzane and his father takes place in an unhinged liminal space.

Here before you is the former president of South Africa who not only stands accused of corruption, but whose fingerprints are all over the capture of the South African state, the squandering of billions in public funds on a network of cronies and corrupt officials and who ultimately hocked the country to a trio of Indian shoe salesmen.

The coronavirus has now served to highlight the full horror of just how much has been criminally gouged out of what could have been a capable state. The country has fallen finally over the fiscal cliff.

But the Zumas live in a parallel universe, like the Trumps. You only need to head over to Instagram to see how some of our former first ladies are living their best lives.

Their world is a Tabula Rasa.

No reference to the fact that the NPA refused to charge one of our first ladies, Nompumelelo Ntuli-Zuma, for allegedly poisoning her husband, a matter discussed at length between father and son in their first tete-a-tete.

On 13 September 2019, then Acting Director of Public Prosecutions KwaZulu Natal, Elaine Zungu, informed Zuma’s lawyers that “there is no evidence that Mr Zuma was poisoned. In fact he has not deposed to an affidavit so I am unable to even refer to him as the complainant.”

The State Security Agency reports also (remember it was Zuma’s Minister of State Security David Mahlobo who had whispered in the president’s ear that MaNtuli had poisoned him) contained “no evidence at all that Mr Zuma was poisoned, let alone by whom”, said Zungu.

That MaNtuli has not sued Zuma, the NPA or Mahlobo for falsely accusing her is evidence of her lack of agency. Banished from the homestead, she lives now with two of Zuma’s children on the periphery of society surviving on handouts.

But, for now, let’s just cross over to this wonderworld where facts don’t matter, where anyone could be accused of poisoning Zuma as well as then Mpumalanga premier, David Mabuza, now the country’s Deputy President.

Duduzane speaks of his anguish at seeing his father for the first time weak with illness in 2015 after allegedly being poisoned. He recounts their frantic flight to Moscow to get treatment, or the antidote which the Russians just happen to have in supply.

What if Zuma is a Kompromat? In the absence of any evidence that the main suspect poisoned him, it could have been someone else.

Kompromat is a Russian term. It’s a routine ploy used to compromise a target.

Quoted in the New Yorker of 19 July 2018, Keith Darden, an expert in the use of this technique, said it had been widely deployed in the former Soviet Union “to curry favour and to improve negotiated outcomes, sway opinion”.

If there is no evidence that MaNtuli poisoned Jacob Zuma, then who did? Perhaps Mahlobo will offer a copy of the scrunched-up piece of paper he brought to Nkandla one night as MaNtuli set out in harrowing detail in an in-depth interview.

But back to the Chronicles of Zuma. While Zuma senior sits quietly in the sunshine in South Africa, Duduzane kicked off the chat rather unexpectedly, talking about the suicide of his mother Kate.

This must have been deeply traumatising for Kate’s five children with Zuma: Duduzane and his twin sister Duduzile, Mxolisi Zuma, Nhlakanipho Vusi Zuma and Phumzile Zuma. Duduzane’s reference to it is the first he has made in public.

Kate Zuma committed suicide by overdose in 2000. She left a note in which she blamed her husband for “24 years of hell”.

Duduzane, who was present when his mother was found foaming at the mouth, recounted the traumatic event to a silent Zuma. Duduzane did not deny the content of his mother’s note to his father, only saying briefly that it had been “leaked” to the media.

The truth is that this is not the case. The letter had formed part of the public inquest docket.

“I guess I wanted to convey that experience from my side. Which I’ve never conveyed to you… We’re cool, we’re in a good space. I’ve dealt with the tragedy,” he tells his father whom he calls “Sir” throughout.

Zuma sagely and without irony responds that “perhaps it’s important to do so. I remember you, in particular, because you just switched off and were not talking. I knew that this was in you… A home without a mother, the men can’t live there. I just wanted to mention that.”

Apart from telling the story of his father’s poisoning, Duduzane felt it necessary to reveal that it was he who had organised an emergency flight to Moscow for then Mpumalanga premier and Zuma ally David Mabuza, who had also been poisoned in 2015, the same year as Zuma.

By the time Mabuza had been brought back from the brink of death by the Moscow doctors, it was Tony Gupta’s cheerful face he encountered as the Zuma bestie accompanied Duduzane to the Russian capital to collect the man who is now South Africa’s deputy president.

Mabuza however — Duduzane dropped into the conversation out of nowhere — had subsequently ghosted him. Just like that. No communication.

Zuma Jr professed ignorance of why DD would suddenly just cut him off after he had organised such a treacherous life-saving mission, and which kicked off in an electrical storm in Johannesburg while a deathly ill Mabuza sat on the plane on the runway.

If the tinkling sound-track and faux sincerity don’t get to you, do give Dudu and Daddy’s Diaries a watch.

It is one massive sub-tweet or dog whistle warning to anyone out there that Zuma is not going to go down alone for the mess. You know who you are. We assume the series will continue ad infinitum or for as long as the Zuma family inserts itself into the public narrative.

There will no doubt be more saucy episodes as media coverage of Zuma’s much-anticipated corruption trial kicks off, if and when it does. DM