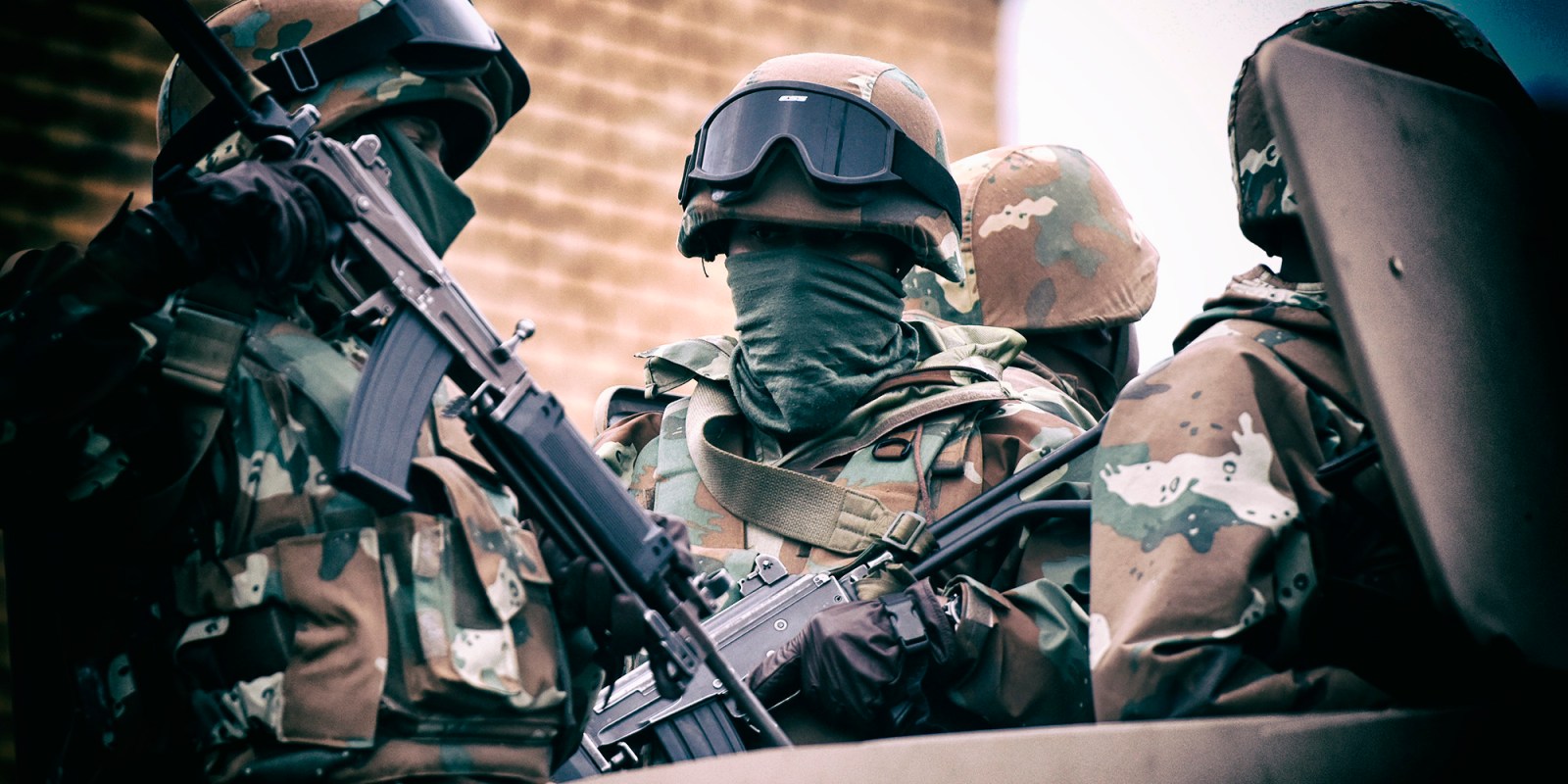 When considering increased militarisation in a crisis, one needs to consider what this means for women’s safety, says the writer. (Photo: Brenton Geach / Gallo Images via Getty Images)

Around the world, a military presence in communities has become associated with sexual violence — and the SANDF has a troubling record around violence against women. Rates of gender-based violence within the SANDF are high — with violence often perpetrated against their own.

On 21 April, President Cyril Ramaphosa authorised the deployment of 73,180 members of the South African National Defence Force (SANDF), tasked with, among other things, helping to enforce the Covid-19 lockdown. A month earlier, at the start of the lockdown, 2,800 SANDF members were deployed. This latest deployment raises the number significantly, increasing the militarised approach South Africa is taking to its lockdown, and growing the number of uniformed men on the streets.

While the presence of the military can help to increase security in one sense of the word, the deployment of soldiers into communities brings its own security risks. Having soldiers on civilian streets creates dangers for women and is likely to hamper women’s ability to seek help when subjected to gender violence.

Around the world, a military presence in communities has become associated with sexual violence. Despite their mandate to protect, it is often soldiers who harm women. Experience from across conflict settings has demonstrated that one cannot assume that just because soldiers work for the state and are deployed to provide protection, that protect is what they will do.

The SANDF has a troubling record around violence against women. Rates of gender-based violence within the SANDF are high — with violence often perpetrated against their own. The problem became so bad that in 2018 the military held a conference at Air Force Base Swartkop to deal with reports of sexual assault in the military. In 2019, Defence Minister Nosiviwe Mapisa-Nqakula instituted a ministerial task team to investigate claims of sexual exploitation and abuse by the SANDF against civilian community members — both in South Africa, and on foreign deployment — after becoming aware of the “rampant” cases, and of the fact that seniors in the military were turning a blind eye to this.

There have been numerous cases reported of SANDF attacks on women within South Africa — most notably in the Western Cape. These are the men now being deployed on to the streets of South Africa to enforce the lockdown.

These soldiers are being deployed into a lockdown already characterised by abuse by armed actors. Much has been written about police misconduct during this period — with reports made to the Independent Police Investigative Directive (Ipid), of police killings, beatings, humiliations and at least one rape.

While most of these incidents have involved South African men being abused by police, this does not spare women. When men are humiliated, some go home and pay it forward to family members. It’s been shown in countries around the world that men degraded by war and repressive states frequently abuse at home. This is one reason that rates of domestic violence spike in conflicts or displacement crises. When men are made to feel powerless, some exert what power they can — all too often leading to violence within the family.

A militarised lockdown response also stands in the way of women seeking help and services when they have been abused. Rates of domestic violence have spiked in lockdowns around the world, as women have been trapped in their homes with abusive partners. As examples, in the Hubei province of China, reported domestic violence cases tripled during its lockdown. In the United Kingdom, calls to domestic abuse hotlines jumped by half. In France, authorities reported a more than 30% rise in domestic violence cases, while Argentina has seen a 67% rise in calls for help.

Strictly enforced lockdown rules reduce women’s avenues for escaping violence and for seeking the help they need. Whereas outside of lockdown, victims might run to neighbours, friends or family to escape, the lockdown has closed down many of these options. Where women are afraid to leave their homes, for fear of being turned back or punished by armed men, they are more likely to stay inside — preferring the danger they know, to that outside. This is likely to be compounded by the proposed curfew, which will further trap women inside during long night-time hours. As of 1 May, a curfew has been imposed between 20h00 and 05h00 as part of the Level 4 regulations.

The Department of Social Development’s GBV Command Centre has made some reporting options available, through internet and phone helplines. Yet these strategies rely on women having access to the internet, data and airtime — leaving parts of the population unable to access these. Even those with phone access might struggle to call for help when crammed into a tiny house with a perpetrator inside with them. There are very limited local, community-based GBV resources available to women and children, often requiring them to travel to service points outside of their communities.

The difficulties in reporting cases or seeking help have contributed to vastly reduced levels of reporting. On 22 April, Police Minister Bheki Cele spoke of the reduced numbers of many crimes during lockdown, including an 87.2% decrease in rape cases, and a “remarkable decrease for domestic-related crimes”. The fact that the minister equates and celebrates a “remarkable” drop in the reporting of gender-violence cases, with a drop in these crimes’ prevalence, is problematic — speaking to a lack of understanding about the nature of gender violence, about the barriers to reporting during lockdown — and to a system that celebrates under-reporting as a sign of success.

This is not what you want from an armed force manning a lockdown through which women need to pass to seek help. It is clear that South Africa has not bucked the international trend of increased domestic violence during its lockdown — rather, we have created a situation that makes it extremely difficult for women to come forward.

The prospect of increased numbers of SANDF men on the streets will likely worsen this problem, making women even less likely to risk leaving their homes. With more armed men around, women will become increasingly afraid of the militarised consequences of being caught outside in “violation” of lockdown when trying to seek help.

Using military to police civilian streets runs against good practice. Soldiers’ training and mandate equips them poorly for civilian policing. Soldiers are trained to “fight and destroy” an enemy, while police are trained to “serve and protect” civilian populations. Soldiers are not trained for a civilian policing function. They are not trained in how to handle victims of gender-based violence. This makes the SANDF a wholly inappropriate force to be deployed on to South African streets.

When considering increased militarisation in a crisis, one needs to consider what this means for women’s safety. Those deployed to protect can cause added risk and harm. The increased militarisation of policing functions is a dangerous precedent to set. The impact of the focus on the policing of lockdown regulations will be at the expense of the safety of women and children. It is for this reason that MOSAIC is calling for the establishment and support of co-ordinated community response mechanisms to GBV.

It remains unclear how long the military will remain in communities; how long they will stay once lockdown has eased. What is clear is that women’s safety will be affected by this military deployment — a blunt tool to deal with the complicated task of securing a civilian lockdown. DM/MC

Dr Orly Stern (@orlystern) works as a researcher, consultant and international lawyer focusing on armed conflict, gender, security and law. She has worked and researched in several countries including Iraq, Somalia, South Sudan, northern Nigeria and Central African Republic. She has consulted for various international organisations, research institutions and NGOs, and has published extensively in her field. She holds a PhD in law from the London School of Economics and a Masters in human rights law from Harvard University.

MOSAIC has been a first-line responder to domestic and intimate partner violence in the Western Cape since 1993. MOSAIC continues to provide access to justice and psychosocial services to survivors of domestic violence, while amplifying awareness-raising and prevention activities with women and girls and men and boys towards eradicating gender-based violence. MOSAIC Training, Service and Healing Centre. www.mosaic.org.za; 021 761 7585; [email protected]