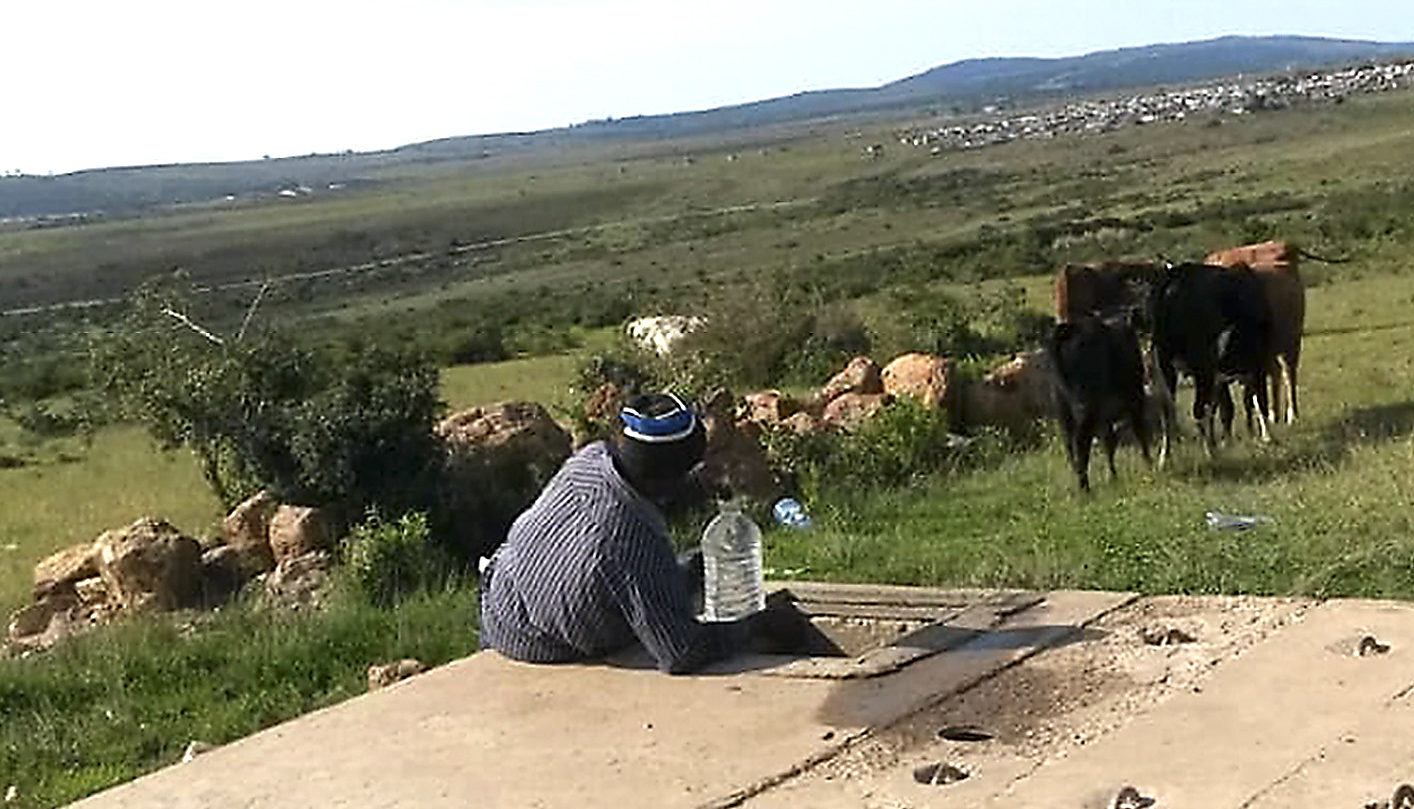 ‘Residents were left with no option but to retrieve water in buckets from this drain. Livestock drink from the same drain. So when there is no water, the residents share the water with cows,’ said Ayanda Kota from the Unemployed People’s Movement in Enkanini township in Makhanda.

Residents in Enkanini Informal Settlement in Makhanda had to fetch water from a municipal drain after days of water outages in the town.

As the long weekend began on 1 May the residents of Enkanini township in Makhanda had to turn to a drain, where they usually allow their livestock to drink, to get some water because their taps had run dry.

Ayanda Kota from the Unemployed People’s Movement said the water stopped running on Thursday until Sunday. “On Monday we had water again but today nothing.”

“Residents were left with no option but to retrieve water in buckets from this drain. Livestock drink from the same drain. So when there is no water, the residents share the water with cows. The poor and working-class of Makhanda already have little to no food.

“Being forced to live without water worsens peoples’ exposure to the coronavirus. This water is unclean and it is likely that if anyone from Enkanini was infected with coronavirus, they would not recover easily drinking unclean water and the virus could also easily be transferred to this drain,” he said.

“There are also snakes living inside the drain.

“This is the only water source for Enkanini when the taps are closed. The municipality regularly closes the taps to Enkanini and all townships in Makhanda for days at a time without warning. It is a crisis for Makhanda.”

Washing hands with water and soap is widely advocated to prevent people from being infected with the coronavirus.

Kota said they did see the occasional water tanker but the tankers cannot provide enough water for everyone.

In January, the Makhanda High Court made legal history by ruling that the Makana Municipal Council should be dissolved because of its unconstitutional failures to provide services to people. Water remains a huge point of contention in the town with another court case pending to force the municipality to fix the sewerage system.

In papers before the court, a number of examples of how the council failed residents were cited. These included failing to address ongoing sewage spills, failing to provide proper waste removal services, failing to plan effectively for the drought and failing to secure the town’s water supply and quality, ongoing air pollution caused by the incineration of waste at the municipal landfill, and failing to pay Eskom, leading to threats that the town’s power would be cut off.

Other issues highlighted in the court papers included the municipality’s inability to maintain road infrastructure, failure to regulate livestock in town, and allowing fire-fighting equipment to fall into disrepair and failing to restock equipment.

The municipality subsequently claimed that it had turned a corner. Both the Makana municipality and the Eastern Cape provincial government are seeking leave to appeal the ruling.

The Makana municipality said in a statement on Saturday that one of the pumps at the water treatment works had broken and reservoir levels have dropped drastically as a result.

“The service provider has been notified and is working tirelessly to repair this pump. This is a new pump that was installed a week ago by the same company that manufactured it.

“Unfortunately, this was our standby pump as the duty pump gave us problems about a week ago and we had to install this new one… Unfortunately, the service provider informed us that there is a damaged part that needs to be replaced inside this recently installed pump and it will only arrive in their workshop on Sunday night since it needs to be couriered from Johannesburg. As a result, normal water supply is only anticipated to be fully back by Tuesday.

“Note that with this current pump problem, our water supply has been reduced by almost half its normal capacity. As a result, the municipality needs to try to manage our water supply by reducing the number of hours of constant water supply from our water reservoirs so as to have water for all our communities.

“We also understand the complexity and danger of not having full water supply 24 hours a day during this Covid-19 pandemic. However, we urge our community to assist the municipality by using water sparingly. Note that our supply has dropped from 18 mega-litres to 11 mega-litres per day. This hectic drop in supply volume can only be dealt with if our communities can use their water with extreme care and conserve as much as they can.”

Last week the Minister of Human Settlements, Water and Sanitation, Lindiwe Sisulu, said during a public ministerial briefing that communities struggling to access water must let the command centre know about their predicament.

Caroline Ntaopane from the WoMin African Alliance said the C-19 Women’s Solidarity Forum had sent a letter to the minister on April 21 detailing the plight of 24 rural communities who had a desperate need for water.

“All of them are still without water. There is no communication from the department with us. Last week we heard that the minister’s advisory committee on water will come back to us. They haven’t done so. We heard that there were consultations with the water caucus, but many of the organisations representing rural communities and women were not included in that invitation,” she said.

“The department is really failing to deliver on their promises.”

Ntaopane said that when President Cyril Ramaphosa first declared the outbreak of coronavirus infections in the country to be a national disaster a high priority was placed on giving communities access to water.

“If the minister could come to us and give some answers that would be great. Maybe she will say that they have done what they can. Maybe they are running out of resources – but they must stop pretending that they are doing something. In the beginning, they had a lot of energy. I fear they used that energy to supply many people living in cities with water. Do they think that Covid-19 is a virus that will only live in cities?” she asked.

In their letter, they describe the plight of 24 communities in South Africa struggling with extreme water problems.

“These communities of concern have, without exception, all registered their complaints from years prior to the Covid-19 crisis, to their local councillors and local municipalities, with some having registered their problems to the ministry without redress. Now, during the Covid-19 crisis when risks are multiplied, they have made further requests which are still not being addressed.

“Women in communities are the ones who carry the burden of water problems. They are standing for long hours waiting for water supplies, which exposes them to others and heightens the risk of Covid-19 transmission. Some women report that they are walking long distances of two kilometres and more to fetch water for washing hands, bathing and drinking. This places women at grave risk of sexual violence as predatory men attack them on their way.

“And scarce money in desperately poor households is being diverted to pay private water vendors, often the only avenue to obtain clean water supplies,” the letter reads. MC