‘Feed us or get us out’: The plight of undocumented Lesotho nationals in South Africa 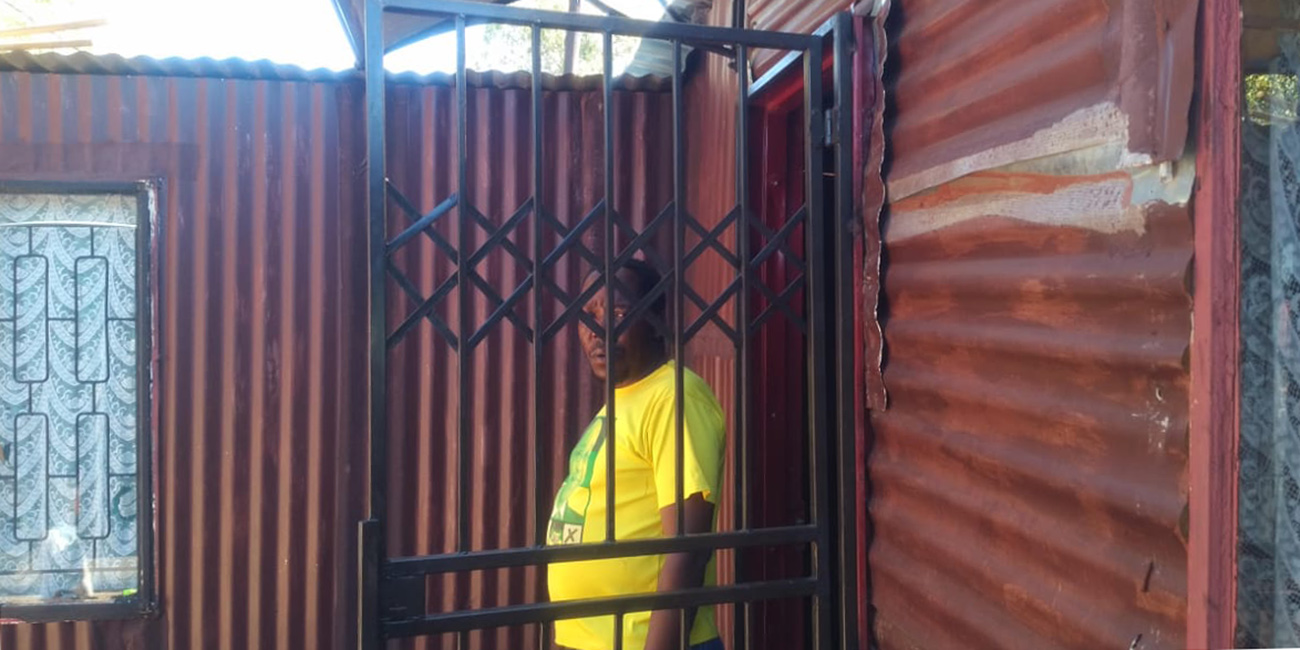 Marumo Thamai, 43, in font of his shack in Protea South. Out of work for many months, Thamai and his family of eight battle hunger daily. (Photo: Bheki Simelane)

Stuck between a South African government refusing to assist them, and closed border posts, undocumented foreign nationals are far from home and face growing hardship.

A frail and apparently weak Maphoka Plakane, 38, an undocumented Lesotho national, stumbled out of the one-room shack she shares with her four children in Protea South, Soweto.

“I’m very sick and I’m hungry. I want to return home so that I can die in front of my family,” said Plakane.

Plakane arrived in SA in 2015 looking for work as a domestic. Five years later she is still unemployed.

“The only time I find work is when a colleague wants me to stand in for them, but it’s usually short-lived,” said Plakane.

The family has no food at a time when their neighbours who are South African are given relief by the government in the form of food parcels and grants. Plakane said it would be better if she returned home.

“You don’t know what to tell the children when no lunch or supper is forthcoming. They are used to the fact that we do not usually have breakfast because we cannot afford bread,” said Plakane.

Many Basotho living in the same area as her face starvation daily.

One of them is 43-year-old Marumo Thamai, who said the little remaining mealie meal he had would not be enough to cook porridge for his six children, himself and his wife. The eldest of Thamai’s children is 23 and the youngest is two years old. Thamai arrived in South Africa in 1993 and witnessed the dawn of democracy, but said he has hardly enjoyed any liberties. Thamai still uses paraffin to cook because his part of the township is not connected to the electricity grid. He has a portable plastic toilet and facilitated his own water supply to his home.

Thamai came to South Africa equipped with construction skills. Over the years he has grown into one of the respected builders in the area, but has not found work in nine months now. He makes a pittance by searching for scrap metal to sell at the nearest scrapyard. He said he was not even able to pay his family’s burial scheme.

“Currently, we are just living for the sake of it. I can’t be productive.”

These families cannot easily return home because of the travel restrictions against the spread of the pandemic. Many undocumented foreign nationals illegally cross into Lesotho as livelihood prospects dwindle in South Africa.

“Some of them, or most of them, are not documented. Others are domestic workers, others have gone to school, undocumented still. Others just went there simply to find work,” said Khutsoane.

Regarding undocumented Basotho crossing from South Africa into Lesotho during the lockdown, Kgutsoane said:

“What we do is screen those who come in and refer them to authorities of the district who in turn will decide where they can be quarantined for 14 days.”

Some undocumented Lesotho nationals in South Africa do not want to be found out because they are involved in criminal activity and also because they fear arrest for being in the country illegally.

Lesotho Minister of Home Affairs Mokhele Moletsane said: “Some are very clear that they don’t want any form of intervention; they won’t even say where they are in South Africa. Some of them are in illegal mining and a number of them involved in other illegal activity.

Some Lesotho nationals who come to South Africa are enticed by work opportunities advertised by agents. Daily Maverick spoke to Matshidiso Ramakoloi of Matshidiso Placement Agency.

“I find them work in the domestic environment because that is the only work I manage to secure and the one most in demand. They phone me from Lesotho seeking work, and, depending on the backlog, I then invite them to come. They stay with me here in Diepkloof on arrival until I find them work. I take them in small groups at a time. I find them work once they get here,” said Ramakoloi.

She said the requirements are that they should have a permit and passport. She said she refused service to those without the required documents: “People without papers can easily get me into lots of trouble,”

Moletsane said the Lesotho government had established a command centre and a sub-committee of Cabinet which is in contact with all the Lesotho nationals stranded in South Africa.

“We have been made aware of the challenges Basotho are facing. We are working on registration of those who say they need immediate intervention from our side for basic needs.”

Moletsane said there were 15,500 such people, both documented and undocumented.

“We are looking at options how to help them,” Moletsane said. However, some, like 23-year-old Polo Ntela who arrived in South Africa in October 2019, do not know where to go for such help. Ntela said she came to look for work as a domestic but only managed to work for a few months.

“Can they please help us with food, we are starving,” Ntela said. But, despite this, Ntela, who is undocumented, said she was not planning to return home to worse circumstances.

Moletsane said, “We are currently faced with the challenge of how to assist them with food parcels because that was the only workable solution. We are looking at other options like cash transfer but there are challenges because we want the money to go to those most in need.

“The first thing that we did was that we looked at the numbers that were given to us and it was around 2,700 and we secured some R4-million cash. We deposited it in a commercial account to process cash transfers for food parcels. Now, the practicality of that has a challenge as we should have their bank accounts. We were advised by the Department of Social Development that what would work would be cash transfers so that people can buy food and medicine.”

The Lesotho government is in negotiations with Shoprite, U-Save and Checkers as these supermarkets have cash transfer facilities. Once the contract has been finalised, the South African Social Security Agency (Sassa) management can then make the transfers to cell numbers of beneficiaries.

“Our embassy and the consulate in South Africa are negotiating for some form of personal identity so that they are identifiable for purposes of accessing the money,” said Moletsane.

Asked if avenues for repatriation of Basotho in South Africa were still available, Moletsane said this was near impossible. He said they were encouraged to remain in South Africa because it would be a huge challenge to get them all out.

“Repatriation would be very difficult for us to execute. We have resolved to help them wherever they are.

Moletsane added that the Lesotho government was in discussion with the South African government about providing shelter for Basotho who have been evicted from their homes. DM