Want to be a Covid-19 survivor? Check your comorbidities 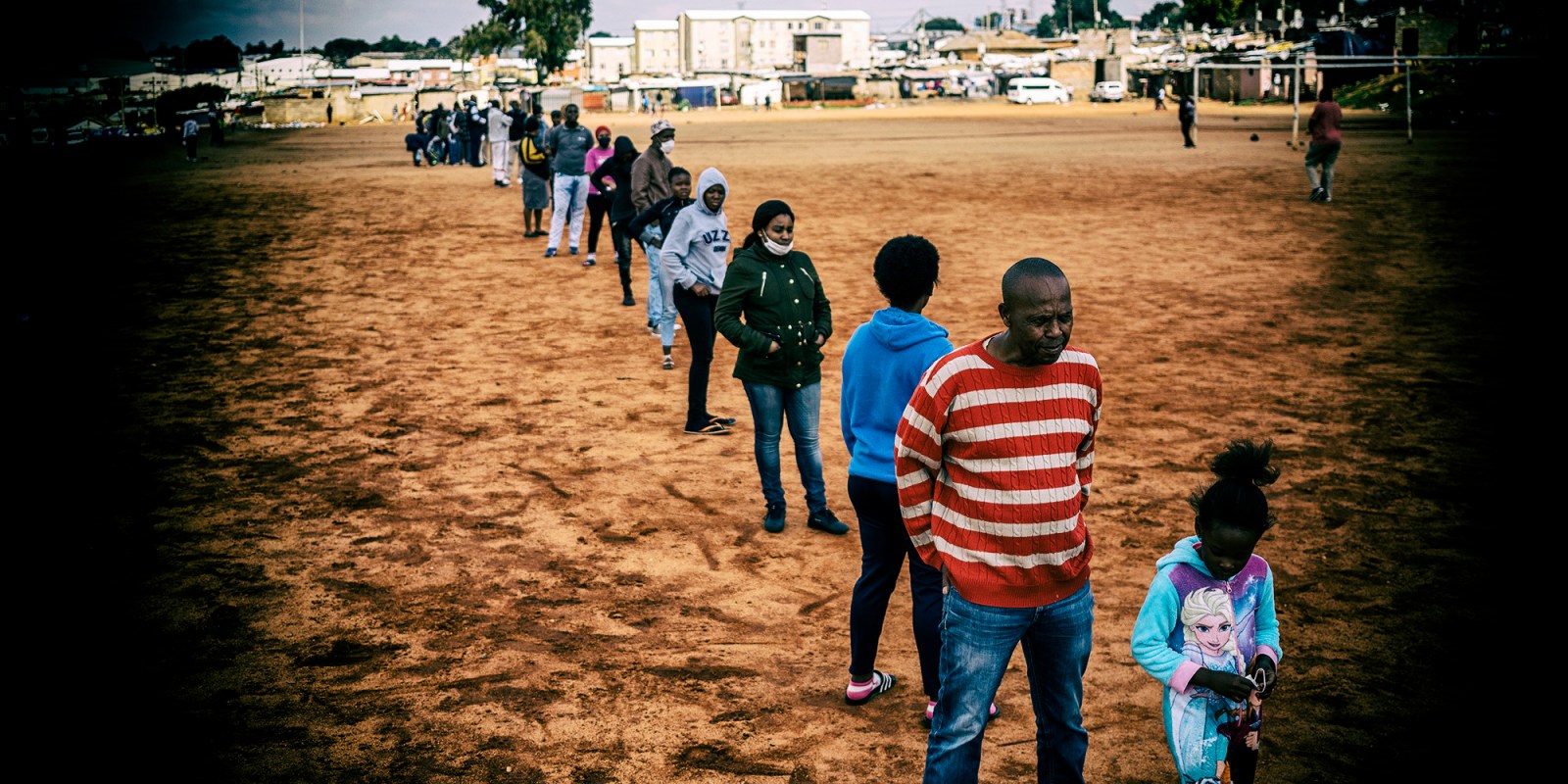 Alexandra, Johannesburg, residents wait to be tested for the coronavirus. Those who are particularly vulnerable are the ‘one third of South Africans who are hypertensive, the 4.5 million who are living with diabetes, and the 70% of South African women and one-third of men who are overweight or obese’. (Photo: EPA-EFE / Kim Ludbrood)

I’ve been scouring medical journals trying to understand who gets sickest with Covid-19 and why. Diabetes, hypertension and heart disease are big risks – but obesity is an under-reported problem.

Comorbidities. It’s an ugly word that has become rather ominous during the Covid-19 pandemic. Most people who get really sick from the virus have “underlying conditions” – other diseases that put them at particular risk.

When our government announces the daily statistics, it also describes the dead. A typical description goes like this: “A 57-year-old male presenting with fever and shortness of breath. He had underlying hypertension.”

In the past few weeks, a growing number of studies have identified a pecking order of danger for these comorbidities, drawing from hospital admissions and death statistics.

“People over the age of 60 who are living with non-communicable diseases (NCDs) including hypertension and obesity have a much higher risk of becoming severely ill or dying from the virus,” Katie Dain, CEO of the NCD Alliance, told a media briefing last week.

“According to the latest data, hypertension and cardiovascular disease are the most prevalent pre-existing conditions, followed by diabetes.”

But each country has slight variations on the top five risks. Health Minister Zweli Mkhize confirmed over the weekend that “hypertension, diabetes and cardiac disease are the three most common comorbidities associated with serious illness from Covid-19”.

Almost 80% of the 123 Covid-19 deaths Mkhize reported on 2 May were people over the age of 50. The average age of death was 64, and most deaths – almost a quarter – were of people aged 60 to 69. A study of 3,200 Covid-19 deaths in Italy found that a massive 98.8% of all those who had died had at least one comorbidity. Almost three-quarters had hypertension, while a third had diabetes. The average age of patients was 78.

Almost 90% of US patients hospitalised during March had one or more underlying conditions. The top five were hypertension (49.7%), obesity (48.3%), chronic lung disease (34.6%), type 2 diabetes (28.3%), and cardiovascular disease (27.8%), according to the Centers for Disease Control and Prevention (CDC).

Meanwhile, a large study of 5,700 patients with Covid-19 admitted to New York City hospitals in March found that well over half (56.6%) had hypertension, over 40% had obesity (41.7%) and over a third (33.8%) had diabetes. The average age was 63. But – like many people’s Facebook relationship statuses – the relationship between the virus and these comorbidities is complicated and some experts have ventured that older age is the only certain risk factor.

Hypertension, or high blood pressure, is by far the most common comorbidity globally. This is worrying for older South Africans as it is more common to have higher than normal blood pressure if you are over the age of 60, according to StatsSA. Observational studies show that people with hypertension are more at risk of severe illness with Covid-19, warns endocrinologist Dr Sundeep Ruder.

“This could be because hypertension is associated with increased activation of the renin angiotensin system that can lead to increased lung injury,” says Ruder.

“Also, hypertension frequently co-exists with other underlying conditions such as diabetes, being overweight and obese and many patients may already have underlying cardiovascular complications,” he adds.

A further worry involves the medicine commonly prescribed to treat hypertension, with speculation that it might make it easier for the coronavirus to enter the body as it inhibits an enzyme called ACE that is closely linked to the ACE2 enzyme through which the virus enters cells.

But there is not enough evidence to support this, and Ruder and other experts caution that patients should not stop their medication as uncontrolled blood pressure can cause heart attacks and strokes.

A number of studies of Chinese Covid-19 patients show that the death rate was three times higher in patients with diabetes. In addition, people with diabetes were far more likely to be admitted to ICU.

In the New York study, diabetes emerged as a strong indicator of severe Covid-19 illness. By the time the study ended on 4 April, 553 people had died. Among the dead, “those with diabetes were more likely to have received invasive mechanical ventilation or care in the ICU”.

This is bad news for almost 13% of adult South Africans – over 4.5 million people – who are living with diabetes.

Ruder says there is “no controversy” about people with diabetes having more severe symptoms and greater possibility of death with Covid-19.

“What we don’t know with type 2 diabetes is whether outcomes are worse only when the blood sugar is poorly controlled. But with type 1 diabetes, if blood sugar is well controlled there is less risk of infection and we are not seeing the severity of disease with Covid-19,” says Ruder.

Type 2 diabetes is when the body can’t properly process insulin. It is related to lifestyle, particularly a poor diet that is high in sugary, processed food. Type 1 diabetes is a genetic condition where the pancreas fails to produce insulin.

Up to 70% of South African women and a third of SA men are overweight or obese. More than eight million people live with obesity, outnumbering those living with HIV. The main driver of obesity is a poor diet high in sugar.

Johanna Ralston, CEO of the World Obesity Federation, told a media briefing last week that people living with obesity are both more likely to get infected with Covid-19 and more vulnerable to severe illness.

“Obesity is associated with increased complications in Covid-19 in France, Italy, New York and New Orleans,” said Ralston. “There is a higher ICU admission rate for people living with obesity, particularly severe obesity.”

She added that people living with obesity appear to be more prone to infection “in part because it causes a chronic inflammatory state that affects immunity”.

In addition “multiple comorbidities are also common with obesity, such as type 2 diabetes and asthma”, which affect the severity of the disease.

Ralston lamented that global lockdowns might have contributed to increased obesity: “People being forced to stay at home has meant a reduced access to healthy food and opportunity to exercise. In South Korea, there has been an increased take-up of processed food, and this might have implications for health.”

Ruder says he faces an “ethical dilemma” when he sees food parcels containing sugary drinks, and appealed to people to donate healthy food to those in need.

Cardiovascular diseases (CVDs) are the third-biggest killer in South Africa after tuberculosis and diabetes. They are often linked to obesity, uncontrolled high blood pressure, smoking, diabetes and high cholesterol. They are disorders of the heart and blood vessels, ranging from damaged blood vessels around the heart (coronary heart disease) to blood clots in the leg veins (deep vein thrombosis).

Heart attacks and strokes happen when blockages stop the blood flow from the arteries to the heart or brain. The coronavirus damages the lungs, causing the blood oxygen level to drop. It also activates inflammation, making blood clots more likely and can cause blood pressure to drop. This means that the heart needs to pump much faster and harder to circulate oxygen, and can strain a weak heart.

In Oregon in the US, 60% of people who died of Covid-19 had underlying heart disease while 44% of patients in ICU in Wuhan Jinyintan Hospital had heart disease.

Studies from China showed that chronic obstructive pulmonary disease (COPD), a disease of the lungs usually caused by smoking or prolonged exposure to air pollution, was one of the most significant indicators of serious disease. Patients with COPD were almost six times more likely to get seriously ill. Smoking is common among Chinese men – almost half smoke in comparison to 2% of women. Men were more likely to be hospitalised and to die in China than women.

Over the weekend, Health Minister Mkhize urged “our millions of South Africans who are over 63 years of age and those who live with these [underlying] conditions to take extra precaution as we ease the lockdown”.

She warns that the Covid-19 pandemic is also making it more difficult for people with NCDs to get their medicine: “Chronic medication dispensing works well for HIV and TB patients who can get up to six months’ supply in advance but not so well with people with NCDs. One of our recent cases involved a 31-year-old woman with type 1 diabetes. She was 31 weeks pregnant and has asthma. But she could not get insulin at her clinic and had to take a two-hour taxi ride to Groote Schuur to get it.”

Healthy eating, exercise and managing stress are key strategies to reduce NCDs – or comorbidities – but these are more difficult under lockdown and worsening economic conditions. DM

Kerry Cullinan is the health editor of openDemocracy and former CEO of Health-e News.