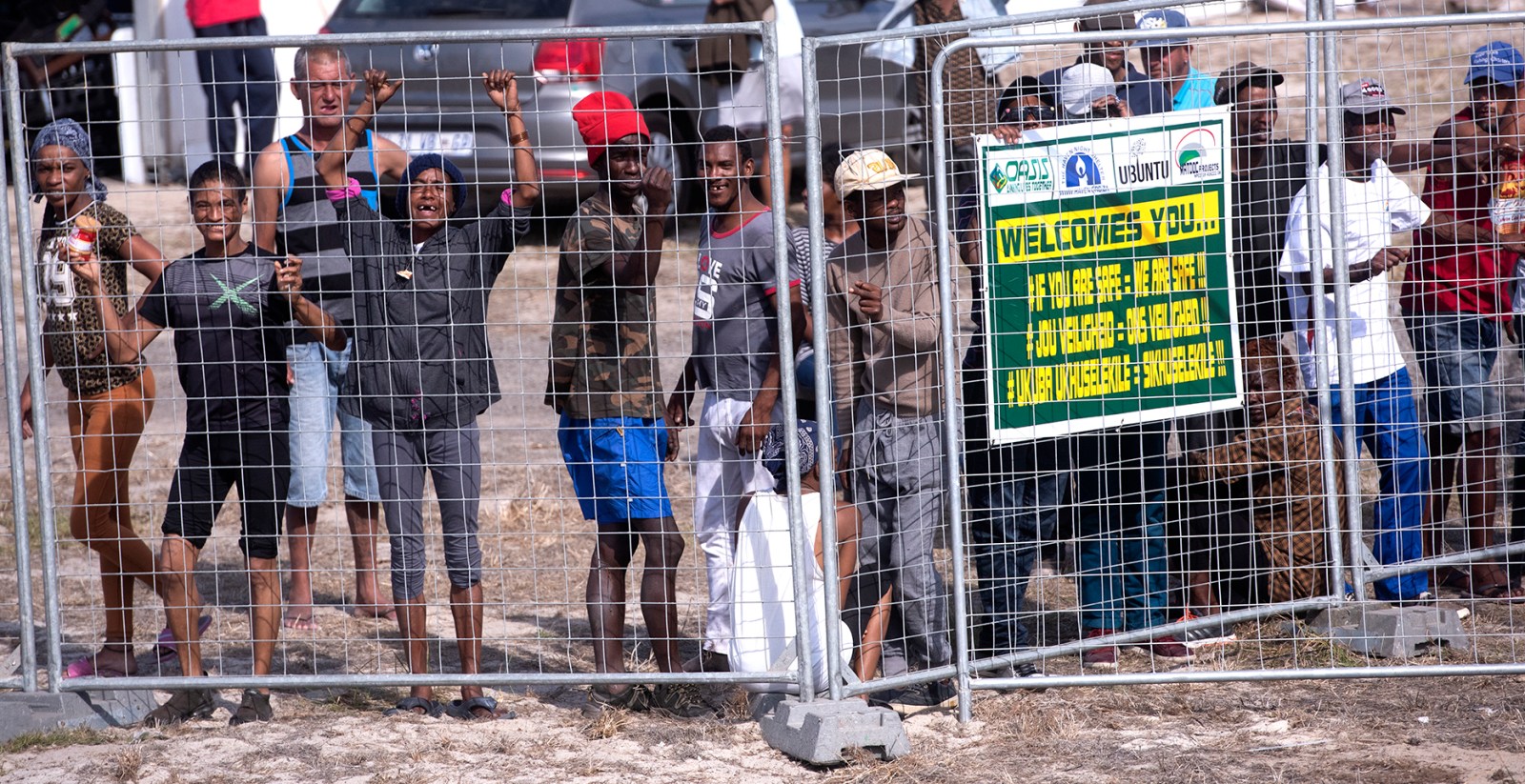 Until the weekend of 1 May 2020, the voices of Cape Town’s homeless, removed at the start of the national lockdown to a temporary camp in Strandfontein, had been absent from a series of controversies surrounding the shelter. While several homeless people have left, about 1,400 remain in limbo.

The Strandfontein Homeless Committee was formed about three weeks ago to give a voice to those directly affected and who have, so far, been excluded from official plans to mitigate the risk of infection during lockdown and relocation.

Homeless Committee member Carlos Mesquita told Maverick Citizen that the committee had twice attempted to engage with Cape Town mayor Dan Plato in order to be part of a comprehensive and integrated plan that would determine where the city’s homeless would be relocated.

The City maintained from the start that the tented camp on a field in Strandfontien was a temporary measure in line with the Disaster Management Act. It will be closed on 20 May 2020.

Since its establishment on 5 April, the site has been the focus of court challenges, a scathing independent report and been criticised for the lack of clear official oversight mandates.

Mesquita said that about 1,400 people still housed at the complex would not vacate the space until the City and other role players directly engaged with those affected.

“Throughout this whole process we were ignored and now we are taking a stand. We are not at all happy with conditions at the camp,” said Mesquita.

The committee has also mandated lawyer Vernon Seymour, who was initially prohibited from consulting with the group on Friday 1 May 2020, to represent the group in talks with the City.

Seymour also represents the Strandfontein Social and Economic Development Forum and Strandfontein Ratepayers Association, who filed a court application against the City.

“We want to be part of the integrated plan that will decide where we are going to stay. The Strandfontein shelter has been one huge failure and we want to make sure that the same mistakes are not repeated. If the City refuses to engage with us then we are not going to vacate the site. The City can take their tents, but we will stay behind,” said Mesquita.

He is of the view that under the Level 4 lockdown regulations it would be irresponsible to relocate people, adding to their health woes during the coronavirus pandemic.

Meanwhile, Plato has lodged a criminal charge against the South African Municipal Workers’ Union (Samwu) and Independent Newspapers for spreading “fake news” that nine law enforcement officers stationed at Strandfontein had tested positive and that this threatened the health of those in the camp.

Plato, in a statement, said that on 26 and 27 April two staff members who had assisted at the Joint Operations Centre (JOC) at Strandfontein had tested positive for the coronavirus.

“The two staff members never had any contact with any of the homeless people at the facility in Strandfontein, as the JOC is separately located and fenced off, and not open to any residents or service providers on site,” he said.

The JOC had been closed, said Plato, and decontaminated.

“Officials who had contact with the two members were immediately isolated and tested, and these results came back negative. No official or homeless person at the site has tested positive,” he said.

He said the closure of the Strandfontein Temporary Emergency Shelter and the decommissioning process would proceed as originally planned. Regulation 11 D (1) of the National Disaster Management Act had originally compelled the City to evacuate homeless people to a place of shelter.

Plato denied claims that the homeless at Strandfontein had not been tested for Covid-19.

“The truth is that every single homeless person was screened at least twice. Everyone was first screened upon entering the site three weeks ago, and then again this week to ensure the ongoing safety of the homeless. A third screening is done for all those who choose to leave the temporary emergency accommodation.”

Plato said “a small number of individuals failed the initial screening process when they originally entered the site three weeks ago, and were sent for Covid-19 testing and were appropriately accommodated in an isolation tent. All tests came back negative”.

Mesquita proposed that an ideal place to house the homeless would be the Train Lodge in Cape Town’s city centre and which, he said, had stood vacant for months. The hostel consists of 10 vintage railway coaches.

Those still at the Strandfontein camp would not move on D-day, May 20 2020, if suitable alternatives were not found, said Mesquita.

On 1 May, about 100 people left the fenced-off camp while activist Zelda Holtzman, of the C19 People’s Coalition’s anti-repression working group, as well as Seymour, were barred from entering the site. Holtzman was arrested and later released.

“At Strandfontein we shared tents with the 28s, 26s, Americans and all other gangs. There were constant fights between groups who tried to cause division and get people to align with them,”

Seymour underlined the stance taken by the homeless was in line with Western Cape High Court Judge Taswell Papier’s remarks, during an application by Strandfontein residents’ associations, for the voice of the homeless to be included in the solution.

It is a view supported by Holtzman who emphasised that this was the first time the homeless people would be able to directly raise concerns.

Maverick Citizen approached City’s mayoral committee member for Community Services and Health, Zahid Badroodien, about the exodus taking place at the site and whether the City was aware of it. He said the City “will have to investigate this”.

Meanwhile, Findiswe Ncuncu, who was allegedly assaulted at the camp by a law enforcement officer, spoke of the dangers faced by women.

Ncuncu has lodged a complaint against the alleged perpetrators and after an intervention by the Human Rights Commission, was relocated to safer accommodation.

“At Strandfontein we shared tents with the 28s, 26s, Americans and all other gangs. There were constant fights between groups who tried to cause division and get people to align with them,” said Ncuncu.

“I was saved by the Human Rights Commission. I don’t want to go back to Strandfontein site, it’s a corona incubator. I want to tell the women still at the camp to keep safe, be strong and speak out what’s troubling to them,” she said.

Meanwhile, Plato said that the City and its NGO partners would continue to offer a reintegration and reunification strategy for “every homeless person at the facility willing to accept this offer”.

Personal assessments had been conducted “with every person at the temporary shelter” and the City was working with shelter providers to expand available accommodation for those who opted to remain in a shelter after the Strandfontein facility closes.

“Some individuals refused these offers and insisted to be removed from the facility and returned to the areas from where they were originally collected by bus,” said Plato.

The City, he said, had filed a detailed affidavit setting out medical and health and safety measures in place at the shelter.

On 29 April the Human Rights Commission released a report which found that conditions at the site constituted “a gross violation of national and international human rights and must be closed down with immediate effect”.

Dr Gilles van Cutsem of Medecins sans Frontieres/Doctors without Borders, who investigated health issues in the camp, said the grouping together of people, some with severe mental health disorders, some with disabilities and others suffering from acute withdrawal symptoms from substance abuse, posed a risk to all forced into the enclosure.

A lack of adequate security also endangered the lives and dignity of the homeless.

“Rather than being a place of safety, the shelter exposes vulnerable people to further harm,” wrote van Cutsem in the report. DM