Griekwastad: An immersive, compelling and chilling piece of cinema 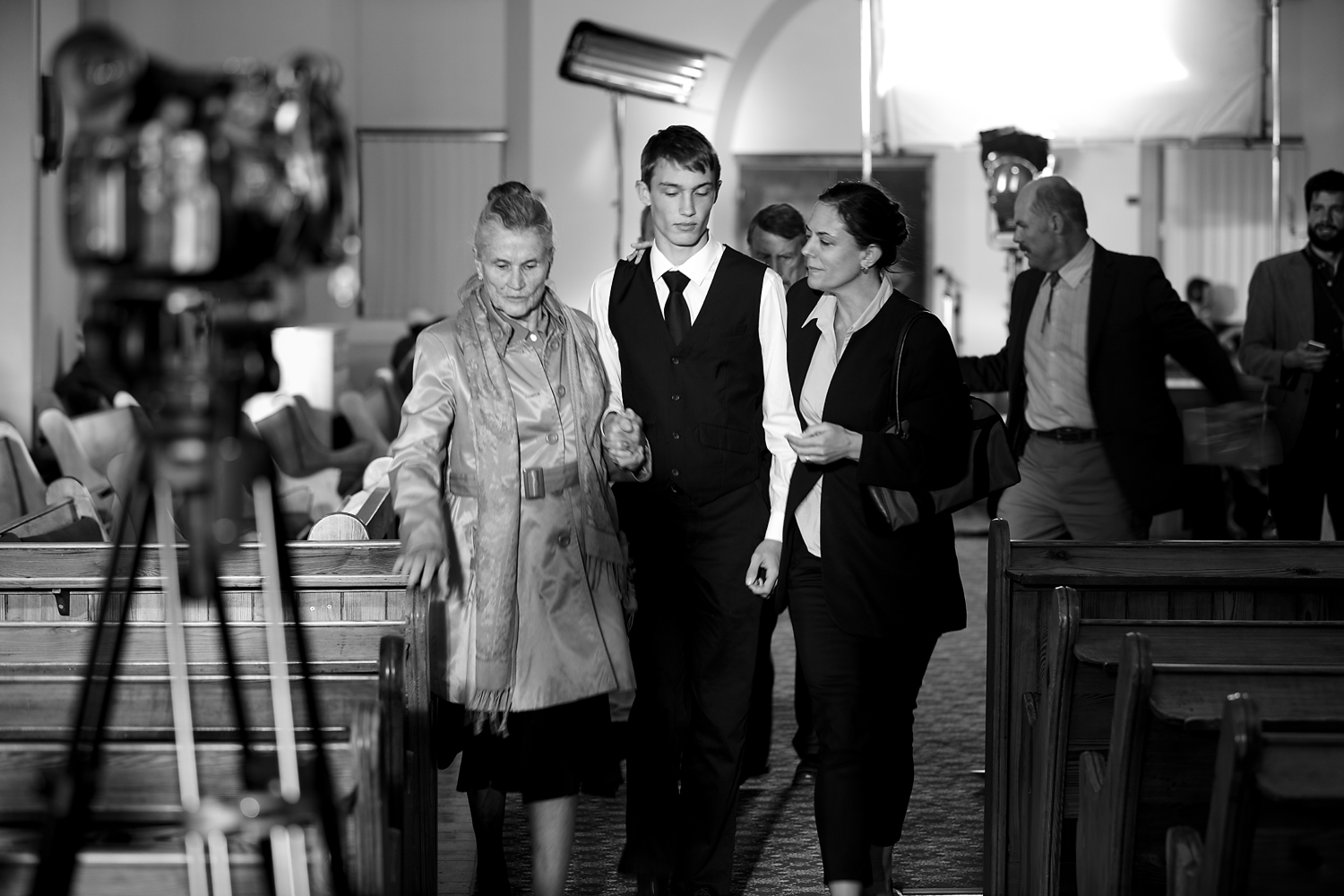 A South African film dramatises the investigation of the 2012 slaying of a farmer and it will leave you with a haunting question.

Films about children apparently possessed of pure evil are not uncommon. There are the creepy child horror films like Children of the Corn; a few menacing munchkin movies like The Good Son (in which Macaulay Culkin does a skin-crawling pivot from his hilarious Home Alone histrionics); a swathe of plots inspired by the Columbine High School shooting tragedy, including Gus van Sant’s beautifully poetic Elephant, in which neo-Nazism and violent video games contribute to teen malevolence; and, of course, there’s The Omen. Because what can be more chilling than children who are instinctively rotten?

Even the vast Harry Potter franchise taps into the notion that some youngsters are born bad, genetically wired to behave in ways that go against the natural order.

In JK Rowling’s fantasy, though, the nasty boys and girls are wizards fated to be on the dark side of history. And in The Omen, the boy with the cold stare and killer instincts is the antichrist itself. Such fantastical supernatural twists staunch the awfulness.

But then there’s We Need to Talk About Kevin, a film based on Lionel Shriver’s novel about a young sociopath (a Muggle this time), whose callous cruelty is presumably tethered to an altogether more disturbing place. It’s among few films that really attempt to get to the cause of what appears to be in-born evil, unpacking the conditions under which a child who enjoys harming others comes to exist. It examines the source of his moral vacuity, and contemplates to what extent his behaviour is either a consequence of some genetic malfunction or the result of faulty conditioning.

Such questions around the building blocks of a child’s moral compass also bubble to the surface in Griekwastad, a film that dramatises the investigation of the 2012 slaying of a farmer, his wife and their teenager daughter in their home on a farm outside Griekwastad, a town in the Northern Cape.

The real-life events became the subject of a book penned by a journalist reporting on the investigation which led to the arrest and conviction of Don Steenkamp, the 15-year-old boy who gunned down his own family.

As with We Need to Talk About Kevin, there is some burrowing into the causes of Don’s actions, but Griekwastad’s piecing together of the puzzle that constitutes the boy’s fall from grace are primarily for the sake of solving the crime – by the end of the movie, the underlying reasons for his moral decay remain speculative.

We do pick up bits and pieces from his life before the killings. We see him happily riding horses with his sister, listen in on their macabre conversation in which he fantasises about life after their parents are dead, and we witness aim being taken at a meerkat through the viewfinder on a rifle. The film leaves it up to us to decide if either sibling shoots the critter or not, but there’s enough to suggest that Don isn’t entirely “normal”.

There’s an unease, an ambiguity. Whether it’s hinted at by an unsettling smile or a deadpan expression, there’s something about the boy that rattles us. There are clues, too, that he’s an outsider – at school and at home. In one scene, his sister cuddles with their dad on the sofa in front of the TV while Don looks on with an unfathomable expression on his face – is it envy, jealousy or something far darker passing through his mind?

Helping us wade through the evidence in the murder case is Colonel Dick de Waal (Arnold Vosloo), the film’s police detective hero whose meticulous investigation must weigh hard evidence against rumour, opinion and blunt denial.

His first South African film role in over 30 years, Vosloo’s is a hefty performance that gives the film its solidity. His tall frame, broad shoulders and depth of experience are scaffolding upon which the film can balance; there’s a genuineness to him that makes Dick come off as unambiguously reliable and deeply human.

And it’s because of this humanity that Dick desperately wants to cling to the belief that children are innocents, and that Don is not the killer. Despite this, though, he dutifully gathers evidence and methodically follows every lead, following the science of his profession.

While we don’t see the slick forensic laboratories typically paraded on all those CSI-type TV shows, we witness Dick pursuing truth with every fibre of his body. He re-enacts the murders, conducts getaway car speed tests, buys the exact same T-shirt Don had worn during the killings to find out what might have happened to it and he makes logical deductions from text messages found on the boy’s cellphone.

Dick really knows his job, but he is up against plenty of uninformed assumption and guesswork.

“This is the Devil’s work,” says a well-meaning neighbour who is snooping around the Steenkamp farm when Dick and his team arrive at the scene of the crime. And while it’s uttered metaphorically, it’s precisely this kind of irrational reasoning that turns flimsy clues – “three glasses, three murders, blood of a virgin” – into evidence of blood rituals and some nonsense about the Witches’ Sabbath.

And, if it’s not the work of occultists, then surely the blame can be foisted onto a disgruntled farm labourer?

It is tantalising stuff, creating opportunities to invent explanations rather than face the truth. And the film taunts us with the possibilities, coaxing us to play along in the game of “What if?” – to hang on to any detail that might prove Don’s innocence.

But what if Don really is the monster no one wants to believe exists?

In the aftermath of the murders, like any half-decent sociopath, Don wears a variety of masks – of civility, of trauma, of loss, grief and worry. He walks the fine balance between going meekly on with his life, amassing sympathy for his loss, and fearing that he might be arrested and found guilty of the murders.

And if Vosloo’s sturdy performance as the dependable, unambiguous Dick is enjoyable to watch, it’s Alex van Dyk as Don who really grabs you, shocks and unnerves you. Not only because it is a tricky role tackled fearlessly, but because he convincingly pulls off those moments when you feel genuine empathy for him. He coolly navigates all the broken emotions while wearing a mask so creepy that he’s able to conceal an unholy terror beneath a naïve innocence. And as he walks the tightrope, he manages to show us someone who is both menacing and capable of unravelling at any moment.

Director Jozua Malherbe (who was also the cinematographer), sets a high standard – the film is calm, measured and polished. It manages to maintain its tension without descending into clichés. Slickly shot with poetry in the telling, it includes nuances that take it beyond the confines of the typical crime potboiler. Charl-Johan Lingenfelder’s score and musical arrangements are at times haunting, working to creep us out when necessary, and in other moments have us digging into our emotional core without veering into melodrama.

All of this adds up to an immersive, compelling piece of cinema – it grips you from start to finish, urging you to join in the game of disbelief, of hoping against hope that Don will somehow turn out to be anything other than malevolent.

And that’s the thing we’re left wondering at the very end: What, ultimately, had been Don’s original undoing?

In We Need to Talk About Kevin, it is his mother who shoulders responsibility for her son’s actions. A cold-hearted mom, she figures, has resulted in a heartless boy who tortures small animals and hatches a plan to murder his schoolmates. She assumes that it comes down to the fact that she hadn’t shown him enough love.

But, in Griekwastad, because Don has slain all three witnesses to his moral and psychological dissolution, there remains an ominous hole where we so desperately want an explanation to exist.

Any explanation that might dispel the idea of a boy who is simply wicked enough to cross the line into the realm of evil. DM/ML

Griekwastad is co-produced by crime novelist Deon Meyer and is Jozua Malherbe’s second feature film. Apart from Arnold Vosloo and Alex van Dyk, it features Jane De Wet, Albert Pretorius, Albert Martiz, Deon Lotz, Ira Blanckenberg, Rolanda Marais, Tim Theron and Jody Abrahams. Although it premiered at kykNET’s Silwerskerm Festival in 2019, its planned cinema release this month has been scuppered by the pandemic; instead, it’s being launched on DStv Box Office on 5 May 2020. It is screened with English subtitles.